I got a regular Savage Worlds game night going on again after being on hiatus for much of the fall (Savage Saturday Night!). Because the guys playing were interested, I’m actually running a full-on fantasy role-playing game.

Most Savage Worlds games I’ve run over the last couple of years have been strictly miniatures skirmish games – there may have been regular characters and some sort of narrative stringing the scenarios together and as much or as little role-playing that anyone felt the urge to do (mostly me laughing maniacally when my evil honcho-type did anything...). This is mostly because a real role-playing game requires some amount of commitment on the part of the players if it is going to work. During the last however many games I ran I found it discouraging when players just didn’t show up or gave minimal notice which ruined adventures I have planned. So I gave up and started running one off miniatures skirmish scenarios that I often just devised at the spur of the moment when everyone arrived…

We’re three games into the campaign and I am having a lot of fun with it thought – those that are showing up regularly are really getting into the role-playing… although already two guys have each missed two of the games and a third that said he was interested hasn’t showed up for one…. This might not last long… If it does look like it might go somewhere perhaps I’ll start another blog to chronicle the campaign and exploits of out dashing heroes!

He’s a couple pics from last night’s game (click on the wee pics for a bigger version): 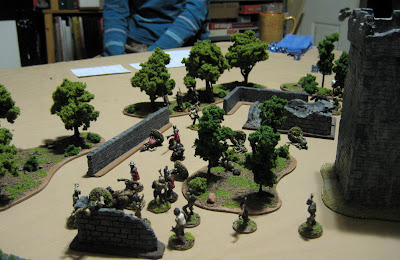 Last nights game involved tracking a necromancer that had raised a small villages graveyard and made off with all the (animated) bodies. The climax was battling the necromancers minions at his secret hideout at some old ruins deep in a dark and mysterious forest. Hard to make out any of the heroes characters in this shot… Somewhere in that mess are a pair of Dwarves; one a Dwarven Knight (and his Bear mount - which can be made out chomping on zombies) and a Dwarvish shoe-maker with a a surly disposition. They had some men-at-arms accompanying them (in the red and white) and some archers (in green – hiding in the wood).

Yes, even in a "full-on role-playing" game I bust out the miniatures and scenery for the action... I am, after all, all about the toys.... 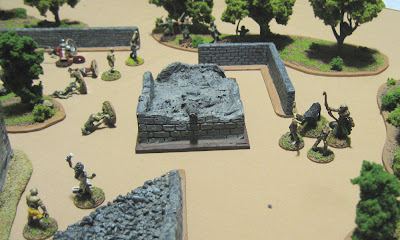 Off on the right you can clearly make out Arddan Lightleaf, Elvin Ranger (Amanda’s Charcter), and her companion dire wolf, Riff, fighting a pair of zombies!

At the end of the battle the necromancer flew (literally) from the top of his tower and escaped… will he get away…?! Guess they’ll have to find out next week!
Posted by tim at 11:28 AM