Because I’m getting sick of the standard game scenario (and I’ve hardly even PLAYED any games myself – I end up running the games more often than not!) I decided it was time to set up a scenario for this week’s game.

Nester the Weasel, a thug for hire, recently in the employ of the Enchanter Morgok, came staggering into the Frosty Apple – the inn at the village of Bregnall – last bit of civilization before you get to Felstad (if you can call it that…). He’d half walked, half crawled four days through the wilderness, out of the ruins. No food, little water and a horrid gash in his side, which he’d bound, but by the time he arrived in Bergnall it was smelling putrid. He kept muttering to any that would listen a wild story about a graveyard in the city his group had come across – full of treasures – and Grimoires! But it was also crawling with the undead. Only he made it out… and he didn’t live long after his arrival in Bergnall

The center of the table is a graveyard. In the middle of the Graveyard is a crypt filled with treasures (6 regular treasures, plus one superior treasure – which requires two to carry but scores 100 experience points and contains two grimoires – in addition to whatever else is rolled). The graveyard is filled with undead – plus more wandering monsters spawn every turn. There were six spawning points spread evenly out around the table edge and four inside the graveyard. Players roll for location first as there were two separate encounter tables based on where the monster was arriving from – all of the monsters that could be generated in the graveyard were Skeletons, Zombies, Ghouls, Giant Rats, and a VAMPIRE!

Rick was back with Silverbeard the Enchanter. The only change I think he made was to replace one of his losses with another Ranger – which he had to Borrow from The Girl. I think he names him Lenderby…?

The Boy Played again with his Nercomancer warband

Amanda had her Thaumaturge. Because she’d suffered some serious losses in the previous game and was unable to replace all her losses she decided to use the Animate Construct scroll. Because I assumed it would have to be a small construct, I gave her one of those to use. I since discovered that spellcasters can make whatever size construct they want with such a scroll – so next game that will probably be a Large Construct!!

The Girl decided to sit this one out and help me run the wandering monsters.

In the afternoon before the game I came up with the scenario, but lacked sufficient Graveyard bits and wanted to come up with something slightly more visually interesting for spawn markers…
(Remember: click on the pictures for a bigger version) 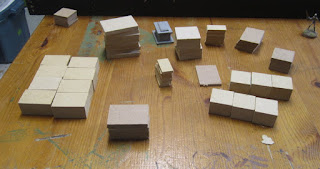 So I nipped out to the shed to cut up some bits of MDF I could find…. 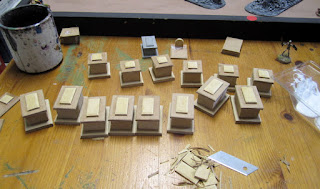 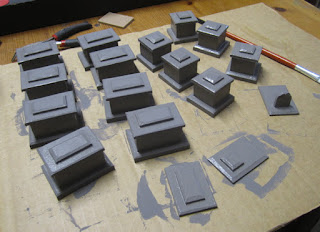 A quick, simple paint job was all I was able to do before the game. Perhaps later I’ll do a little sanding of some of the rough edges, repaint, and to a bit of dry-brushing… but for now, these would have to do. 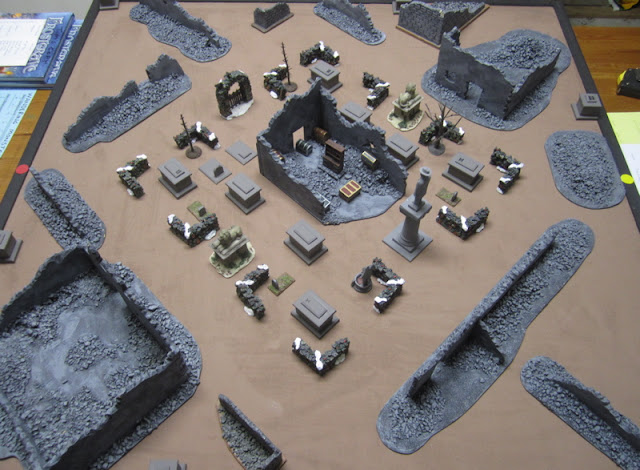 The Cemetery all set up 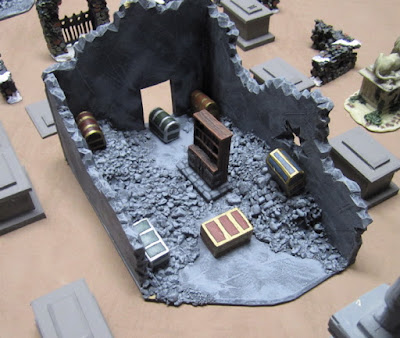 Detail of the ruined mausoleum and the treasures within. 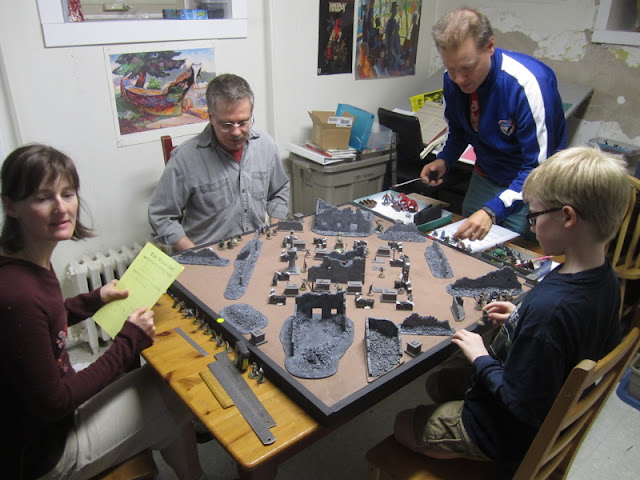 Everybody set up and ready to go!

I set out four skeletons, two zombies and two ghouls in the graveyard before the game as well. I was a little worried this might be a bit much, but they were easily taken care of in the first two turns… from then on it was just the wandering monsters that spawned on every turn and the rival warbands… 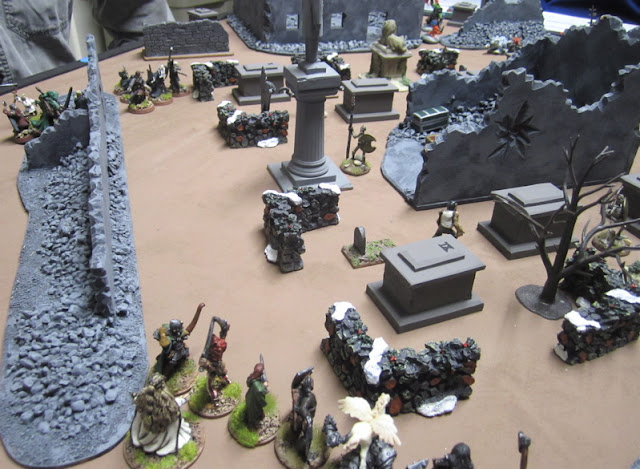 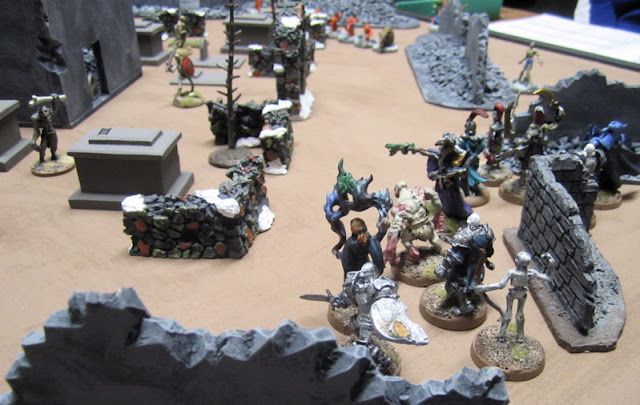 The Necromancer’s warband heads into the ruins… 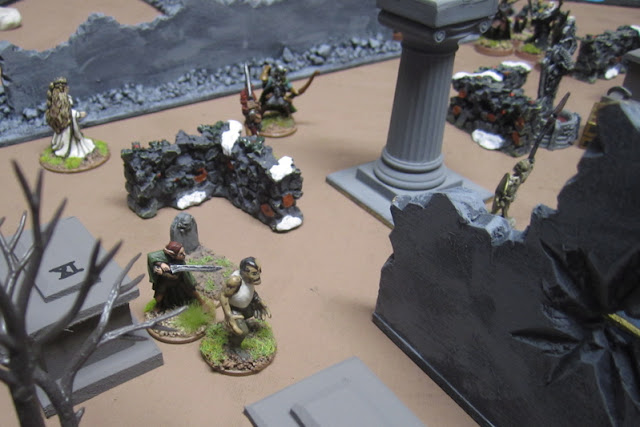 Amanda’s Treasure Hunter takes out one of the Zombies. In the back ground arrows start flying between the Elves and Silverbeard’s gang. 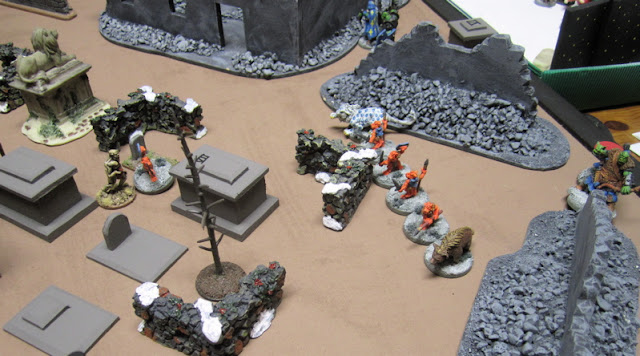 The Orc Summoner’s minions skulk their way towards the graveyard. 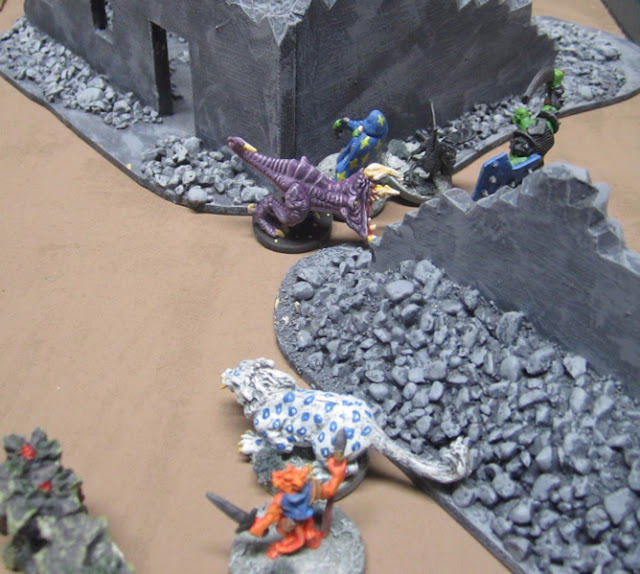 Things started going poorly for the Orc summoner on Turn One when he tried to summon a Demon and rolled a one. He narrowly escaped death when the deamon took a chomp on him. his Knight – with a magic sword – rushed to his aid – only to die horribly in the jaws of the Demon! 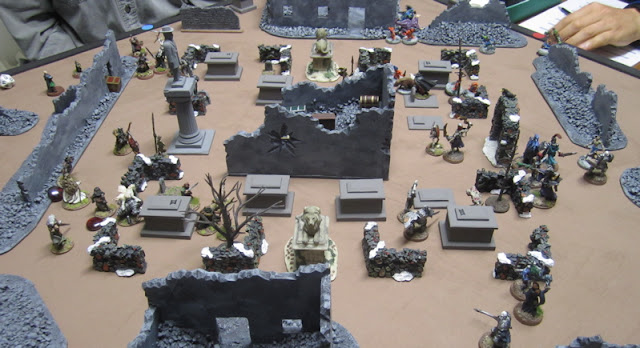 I think this was the end of Turn One – Monster spawned in the area of the graveyard nearest the Orc Warband – The Vampire.

Vampires are nasty… There was 3% chance of one showing up… and he showed up on the first turn. 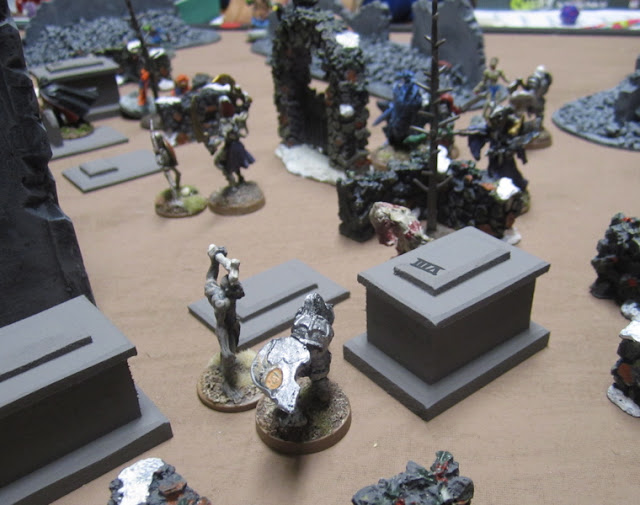 Necromancers minions battling the undead in the graveyard. 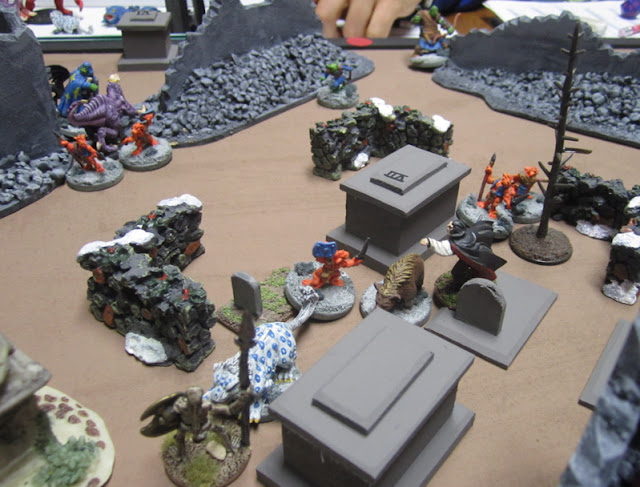 Orcs fighting the undead in their corner of the graveyard. 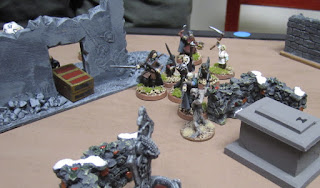 Silverbeard’s warband floundering against a ghoul. I seem to recall that ghoul selling itself dearly and causing some serious wounds… but after three days my memory isn’t exactly spot on…

He did manage to whisk one treasure out of the mausoleum with a Telekinesis spell and handed it off to a Thug that quickly dragged it off.. 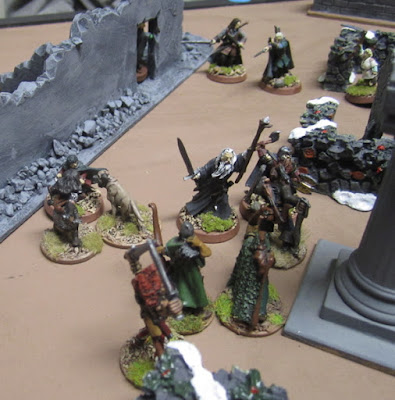 Silverbeard’s gang and the Elves mixing it up! Silverbeard himself charging into the melee!?

The action got so desperate, Silverbeard’s wounded Archer and Ranger started shooting into combats… which almost always ended up with his Thugs getting an arrow in the back (you think after the first one he’d learn… or maybe the second…? or third…?! I guess thugs are cheap…)

Giant Rat! One of, I think, two Wandering Monsters that DIDN’T show up in the corner of the graveyard that the Orcs were set up near. 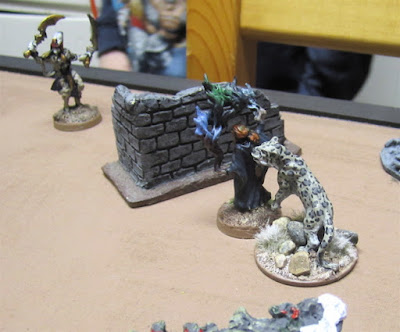 Nope, three. Three wandering monsters showed up in different locations – because this Snow Leopard showed up near the Necromancer’s Warband and had a nibble on the Apprentice! 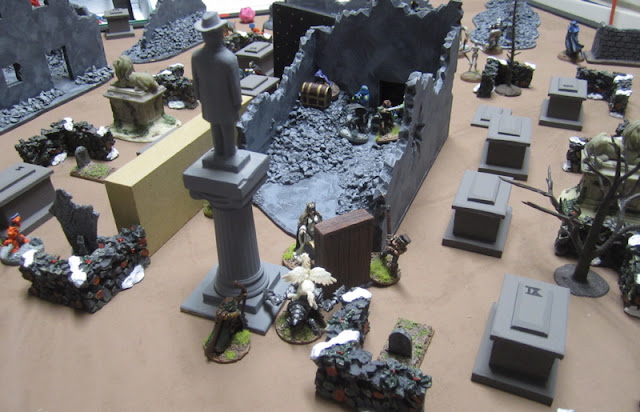 Elves hauling away their booty. The Summoner and apprentice only just made it into the mausoleum – he’d created a wall that kept himself and the Necromancer out of is for most of the game – later they used leap to get over the walls and into the mausoleum. There they found the Elf Treasure Hunter waiting to ambush them and try to claim another treasure for her master. 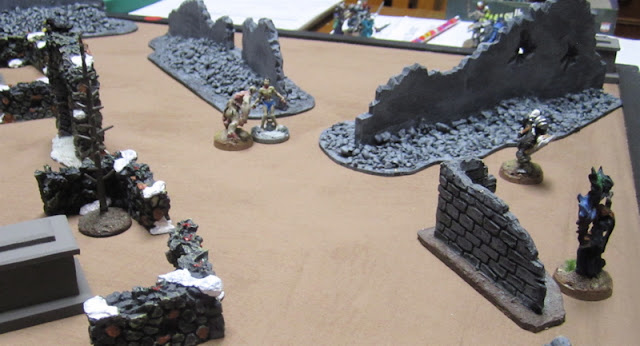 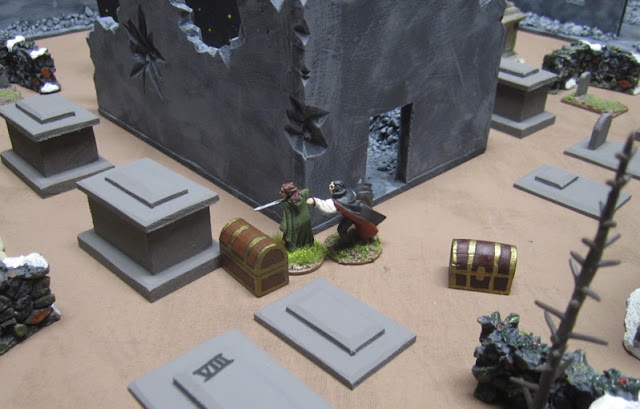 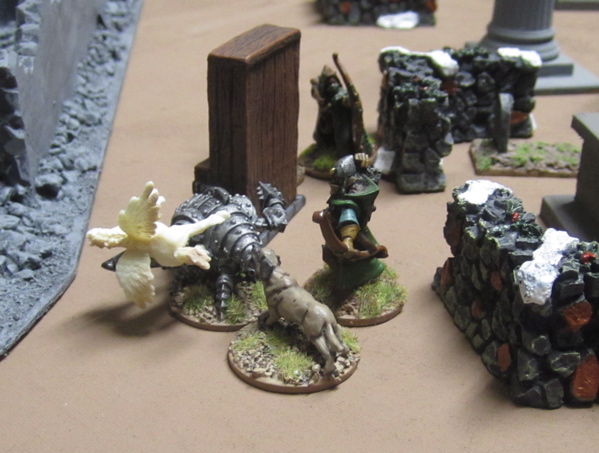 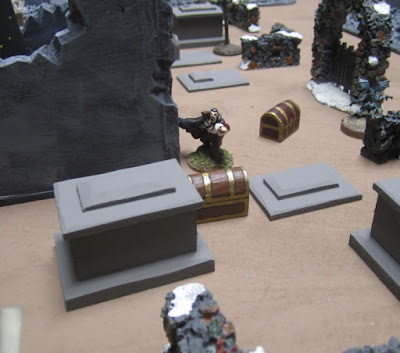 This was a first – Even though we started with less treasure than we normally do the game ended with treasure still left on the table – it had been a bit of a bloodbath and most warbands lost half their number to injuries – the rest slunk off with what they could or decided discretion was the better part of valor and decided to leave it to the Vampire!

We’re not finished with that Vampire – I ‘m quite certain he’ll be showing up in games again!

I was worried the scenario might be a bit tough - but it turned out just about right. I like placing all the treasure in the center - it guaranteed a bit more contact between the warbands. I honestly though some might make some temporary alliances - at least until the wandering undead that started in the graveyard were taken care of, but the combat between he warbands started off right away! I briefly thought the Orcs might ally with the Necromancer - when the Necromancer sent in his knight in to help against teh vampire - being the only model who could actually cause the Vampire any damage (after the summoner lost his own knight - who carried his only magic weapon!) but after the Summoner's Tracker started taking out members of the Necromander's warband - one per turn, every turn - including the Necromander himself! - that ended that possibility...

Aamnda’s Treasure Hunter – that was taken out near the end by the Vampire - was never seen again. The rest of her wounded - a Thug, both Marksmen, and the dog - all recovered from their injuries. Most of the rest of her crew staggered off the board with only a few points of health left… Among the three treasures she collected (including the big one!) she found only gold and the two bonus Grimoires – but she found a LOT of gold – 605 gold! The Grimoires she found were for Fast Act and Poison Dart. She also gained 250 experience (50 for spells, 200 for treasures).

Tim’s apprentice survived, but his knight (with the magic sword – that had rushed to the aid of the summoner when the Demon spell back-fired) died. He’d also lost the Snow Leopard, Warhound and three thieves – two of the thieves were seriously injured and would miss a game, the rest recovered. In the single treasure he hauled off he found 20 gold and a Horn of Destruction. He gained 210 experience though (40 for the level difference, 80 for spells, 50 for treasure, and 40 for killing an enemy soldier) which brought him to a total of 690 – just shy of another level-up!

Rick had lost every member of his warband except the Wizard and Apprentice and a thug that had carried off his sole treasure early in the game. (shooting into combat seems to not be the best idea ever!) The Wizard and Apprentice ended the game wounded as well (less than 4 health!). All recovered from their wounds except Sam, who died… Makes me wonder if they were really wounded at all or if there’s some malingering and lack of commitment to a Wizard who orders his men to shoot into combat with other members of his party…. In the solitary treasure he found120 gold and a Grimoire containing instructions for the Glow spell. The wizard gained 160 experience (50 for the level difference, 50 for treasure, 60 for spells)

The Boy’s Necromancer fully recovered, but his apprentice suffered a permanent injury (smashed leg). A Thug died, but his Knight and Infantryman fully recovered. After losing his Necromancer his heart wasn’t in it and the warband started to retire – when the apprentice went down, it became an all-out rout! They left the table with no treasures, but the wizards did gain 130 experience (20 for the level difference, 80 for killing a couple soldiers, and 30 for spells).

Won’t be back at Frostgrave for a couple weeks as this weekend in ToonCon!

If I get any more painting in this week, I should have a post with a bunch of Englsih Civil War Scots…
Posted by tim at 8:02 PM