Back to the Frozen City...

I did not actually get to playing En Garde! over the weekend, but last night I did finally get to kick off a new Frostgrave campaign just with the family. I thought it would be fun to run a campaign just with the family - and it would give me an opportunity to get back up to speed with the rules and playtest a few scenarios before the 12th Annual Wargaming Birthday Bash/Winter Wargaing weekend coming up in lightly less than four weeks! Originally I’d planned to run a A Song of Blades and Heroes campaign, but decided to switch to Frostgrave because… well… it would just be easier… Mostly because I’ve been working on a new campaign system for Song of Blades and Heroes, but I knew I wouldn’t have an opportunity to fully playtest it at all before the wargaming weekend and I hate trying out totally new things at a campaign weekend where there will be a little bit of competition and, even among the friendly gamers I’ll be playing with, holes in the system would likely be found (alarmingly quickly) and exploited… Frostgrave is at least is a known quantity – I know what to expect from it… and it’s fun… I’m sure it will be a great weekend!

As we got started a bit later than I expected, we simply played a standard scenario without any special rules or even any wandering monsters (which is, I think, a first!?). Next week we’ll spice it up with something new!

I think all of us, except perhaps The Boy, tried out a new type of spellcaster that we’ve never played before.

Amanda played an Elementalist named Winona and her apprentice Raisin(…? Yeah, I have no idea…). Exploring the ruins with them was a Tracker named Tammy, two Treasure Hunters named Helen and Ellen, and three Thugs names Sandra, Melissa, and Carrie. (The figures are all from my own collection – Amanda likes to play, but can’t be bothered to get her own figures…)

The Girl played a band of giant anthropomorphic mice lead by a Chronomancer names Rumpy Silkskins and his apprentice Glinda Mistletoe. With them were three Archers names Redfeather Tickle, Milly Greenbottom, and Tilly Yellowpatch, a Crossbowmouse named Lara Dustfur, Two thieves named The Blue Squeaker and Lumpy Cheesecakes, and Infantrymouse names Admiral Browntail and a Warhound names Flash. The figures are all the frem The Girl’s own collection and, with the the exception of one of them, were all painted by her.  (I think this is the first time ANYONE had played a Chronomancer in any of our games so far)

The Boy rolled out with another Lizard Witch warband lead by Bloopblupblop and his apprentice Sithana. He commanded a Knight namd Sthanos, two Infantrylizards names Sotha and Hiskanal, two Javalineers names Hroot and Grook, a thug names Gurth and Theif named Inkath.

I tired out the Soothsayer (using my recently painted Green Wizards). Alvareda and her apprentice Jonquil led a band of rough sorts; Lars (the Archer) and his brother Darragh and his other brother Darragh (both Men-at-Arms), four Thieves named Will, Jenny, Alfonso, and Cerebus (an Aardvark!?), and a big mean dog named Spike.

Despite the decision to allow the new Captains presented in Sellsword, no on opted to try one out…?

Before the game got going my soothsayers successfully cast Reveal Secret (allowing me to place an extra piece of treasure just in front of my deployment zone. The Boy’s Witch also successfully summoned an Animal Companion – a giant Ice Toad who was quickly named “Ribbet” 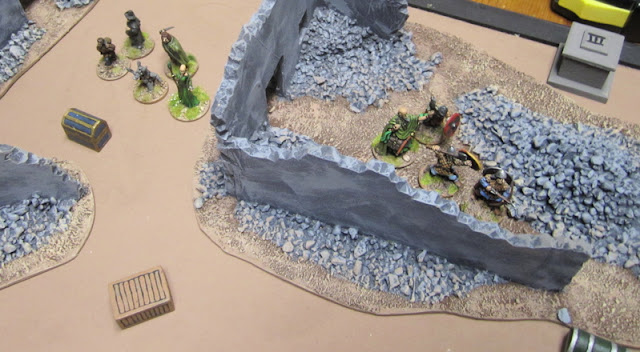 It’s been a while since I’ve played so I didn’t have the smartest set-up. Jonquil went off with the three brothers leaving Alvareda with the thieves… so all the hitters with one spellcaster, all the carriers with the other… doh… 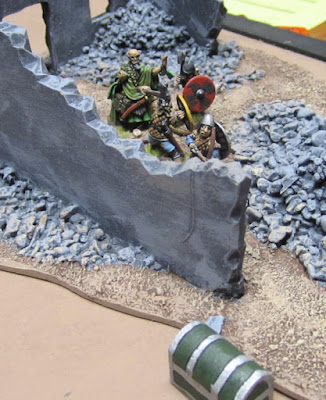 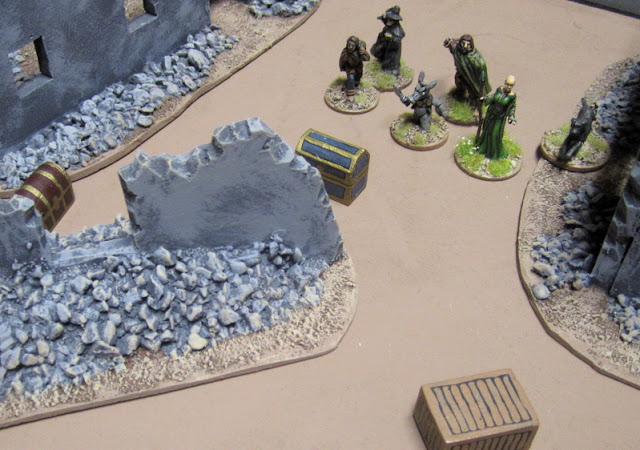 Alvareda and the Theives with three more treasures that looked easy enough to grab – we would be in and out without any contact with the other delvers of the ruined city! 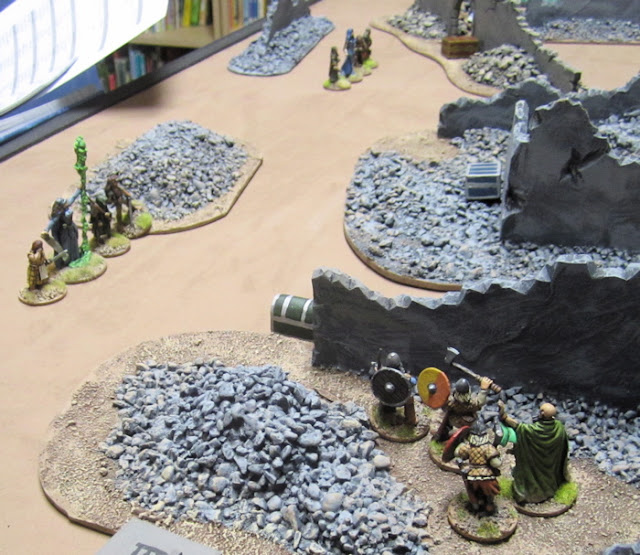 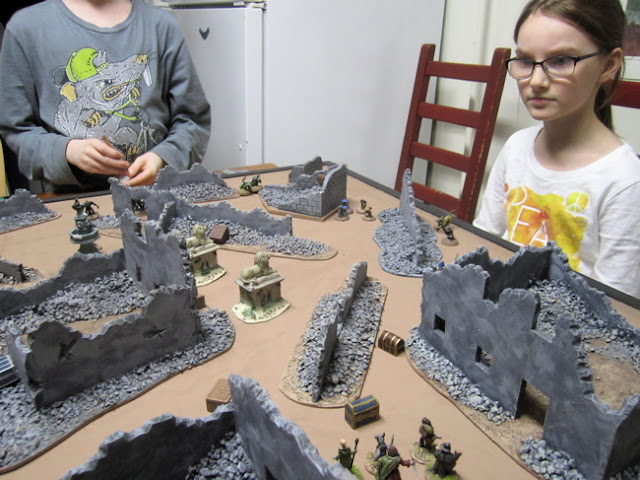 On the flank I had The Girl’s Giant Mice Chronoimancer warband. WE always seem to end up having a non-verbal “you-take-these-I’ll-take-those-and-we’ll-leave-each-other-alone” type pact in all our games of Frostgrave…? 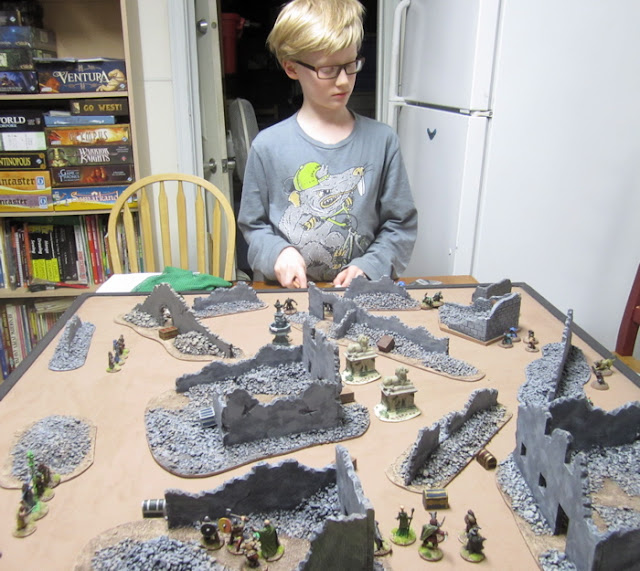 The Boy and his Lizard Witches were across from me and I would have no contact with them at all. 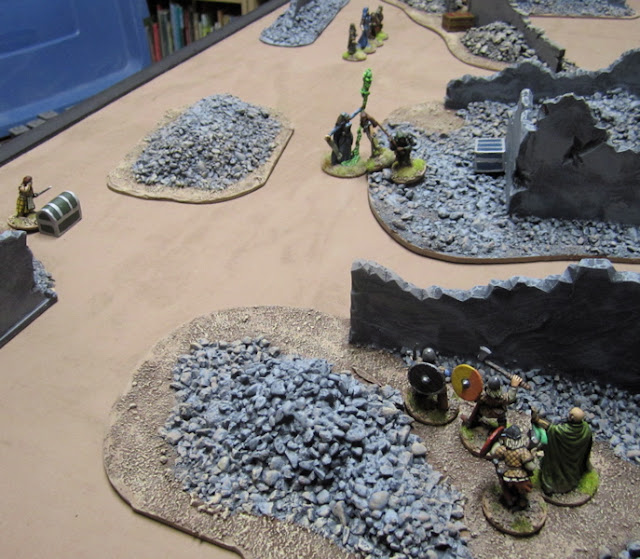 On the first turn the Elementalist went first and whisked away that closest treasure to an eagerly waiting thug who then picked it up and ran! 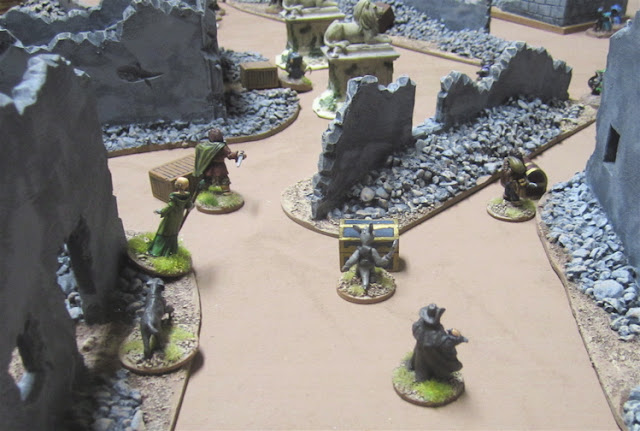 The Theives with Alvareda quickly snatched the treasures in front of them and readied for a quick get-away – eyeing the giant mice with suspicion! Alvareda successfully cast Mind Control on Tammy – the Elementalists’ Tracker – but Tammy successfully resisted 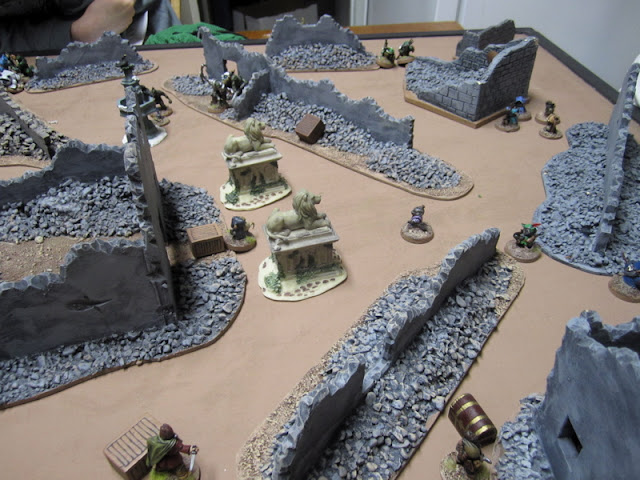 The Mice and Lizards mixed it up a bit – in the course of the game Mouse Archers took down two Lizard Javelineers.

Lars put an arrow in the thug with our treasure the Darraghs rushed out to grab it, but the Elementalist hit them with a fireball knocking Darragh our and wounding Other Darragh! Other Darragh soldiered on and, with the help of Spike, took on one of the elementalists Treasure Hunters.

And then I forgot to keep taking pictures…

Alvareda and Jonquil made a few more attempts at casting Mind Control on various members of the Elementalists – which mostly ended with them bleeding out their nose and ears (failing horribly!). Then Alvareda was hit by a scattershot from Winona the Elementalist and the two soothsayers spent a few turns trying to heal themselves… Eventually they got better and manged a few successful Combat Awareness spells too late in the game to have any affect (other than gaining them some experience).

In the end, the severly wounded Darragh managed to take down the Treasure Hunter and Alvareda successfully cast Mind Control on Tammy the Tracker – who was coming to get him. As Tammy and Winona were the only members of the Elementalist’s warband still on the table, the Elementalist decided to beat a hasty retreat of the table rather than fight her own hireling…

I really missed not having wandering monsters or special rules… it adds a lot to the game. Otherwise there is temptation to just grab a couple of the closest treasures and scarper…

The Girl’s mice soffered no casualties at all and hauled away three treasures. Among those treasure she collected 295 gold, an Orb of Power, and three Potions (Elixer of Speed, Potion of Invisibility, and Potion of Invulnerability). Her wizard gained 210 experience (150 from treasures, 60 from successful spells cast) and gained two levels.

Amanda’s Elementalist’s warband suffered four casualties. Her Apprentice was badly wounded and will miss the next game (or require some expensive healing!), Helen and Sandra were patched up well enough that they’d be able to soldier on next game, but Helen was a little more seriously injured and will give the next game a miss… Among the two treasures they hauled off the collected 120 gold, a Staff of Power (1) and a Grimoire of Invisibility. Winona earned 160 experience points (100 for treasures, 60 for spells cast). I think Amanda is planning to abandon this warband and try something else next game.

The Boy also suffered four casualties The two Javelineers and the Toad were all wounded lightly enough that they’d be able to soldier on next game, but Sotha the Infantrylizard will be out of action a bit longer. The Lizards collected three treasures which included 220 gold, a Grimoire of Wizard’s Eye, and three Potions (Explosive Cocktail, Potion of Strength, Elixer of Speed). His wizard earned 290 experience points (150 for treasures, 60 for spells cast, and 80 for taking out Raisin the Elementalist’s apprentice).

The Darraghs and Spike the dog recovered from their injuries quick enough that they’ll be ready for the next expedition into the frozen city. Among the FIVE treasures the Soothsayer’s warband collected they found 280 gold, Potions of Healing and Invidibility, TWO Scrolls of Raise Zombie, a Magic Dagger (+1), a Ring of Teleportation, and Grimoire of Fog. Alvareda earned 320 experience (250 for treasure and 70 for spells cast). She decided to improve her fighting and practice up on Mind Control and Combat Awareness. I am tempted to have her send one of the Thieves packing and hire a Captain...

I like the Soothsayer – though most of my spells were 12+ to cast… I took Mind Control, Combat Awareness, and Reveal Secret for my Soothsayer spells, though I’m kind of wishing I’d taken Forget Spell… I think my first grimoire purchase will that. I also took Bind Demon and Control Construct just to be THAT Wizard that messes with EVERYONE’s heads… but with the current group of wizards it’s looking like those won’t be so useful. I should have taken Control Undead as well. Control Animal, being a Witch spell (which is opposed to Soothsaying) would be a tough one… I rounded things out with Heal, Invisibility and Fleet Feet.

I think we’ll play a few scenarios out of the main book and then I’d like to try playing trough either the Hunt for the Golem or Thaw of the Lich Lord campaign (or perhaps BOTH!).

In other exciting – but Frostgrave related – news, just as I sat down to type up this game report this morning I had one email that informed me that my order from Black Tree Design has finally shipped (with figures all destined for Frostgrave and Dragon Rampant warbands and Lion Rampant retinues) had FINALLY shipped AND a note from Joseph McCullough himself informing me I’d been selected as one of our winners for the Frostgrave Wizard Sheet giveaway! How cool is that!?

I’ve started cleaning up the basement this weekend and had a big clear off of the workbench. It was getting mighty cluttered. I tend to just keep adding things to it fast than I can actually paint – keeping things “in the wings” to remind myself that I SHOULD paint them up in the not-too-distant future. What remained were a few remaining swashbucklers and lots of Medieval/Fanatasy stuff… and a few other odds and ends… hopefully I’ll get to finishing a few more things up this week before our next adventure into the Frozen City!

I'd still like to get in a game of En Garde! at some point this week - even if it's just a small game just to try it out.

I also need to get working on some MORE TERRAIN!
Posted by tim at 9:14 AM