In addition to the assorted other bits I finished up this week, I got to work on some guys for one specific warband.  Among the new toys from Black Tree Design that arrived last week there were a number of Hundred years war figures I picked up to use in Frostgrave warbands  - oh, I picked up even more to use in Lion Rampant retinues (or  Dragon Rampant warbands) – but these extra ones were specifically earmarked for use in Frostgarve.

Instead of painting them in an assortment of colours to make them look like rough mercenaries that could be used for any warband (you know, the sensible thing to do), I thought it might be fun to have a few warband members painted up in a uniform of sorts – showing their colours, as it were. I imagined that as a wizard progressed and earned money enough to hire better troops (beyond the initial thugs and thieves) they might want to equip the more permanent members of their party with the Frostgrave equivalent of “team jackets” – maybe to give them a sense of belonging or maybe just as an ostentatious display of their wealth and success.

I picked up a bunch of light foot from Black Tree Design for this purpose as most of them are wearing gambesons - padded armour that I thought could be the rough equivalent of “leather armour” that seems ubiquitous among the mid-level hirelings in Frostgrave. I also thought they looked warmer… all than padding has to provide some insulation.

The first batch I’ve done in yellow to go with the previously painted Golden Wizards. I figured gold wizards would be the most ostentatious of the lot…

The whole lot of them. This isn’t a picture of an actual warband – obviously there are more there than I could ever field at one time. Also these are all mid-level hirelings. When starting off with these wizards I’d probably have two or three of these with a bunch of thugs and thieves to fill out the ranks.

Why did I not paint up any thugs or thieves in “team colours”? Well I figured I’d just use my “generic” thugs and thieves as the wizards would view those lower paid hirelings as being more or less “disposable” and of limited loyalty… The mid to high pay hirelings are a little more apt (and able) to stick around and they might be a bit more worth investing in… Also I could see hiring thugs and “upgrading” ones that survive to Infantrymen or Men-at-Arms by paying the “hiring cost” - but seeing it more as the cost to equip them with better stuff…? 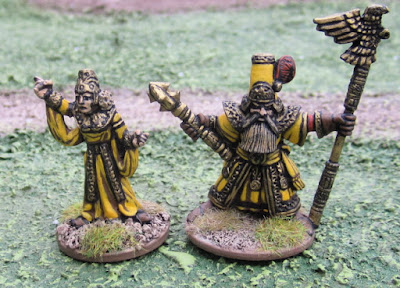 The Wizard is actually an old Games Workshop Empire Gold Wizard, the apprentice came in a pack from Mega Minatures. The rest are all from Black Tree Design. 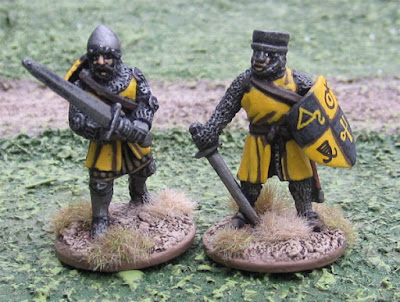 The ‘eavies… a Templar (Mail and Two-Handed Weapon) and Knight (Sword, Shield and Mail). 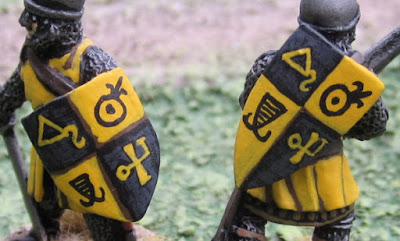 A detail of their shields. I wasn’t sure what to put on the shields then got this idea that I could use alchemical symbols for gold! Looking at the wizard now I’m thinking I could have gone with a Golden Eagle motif (like the one on his staff!). Ah, well…

I do like Treasure Hunters and Rangers – but I haven’t found any to use at them just yet. I might just use my regular ones. I might try to find an apothecary and bard for this warband at some point as well.

I guess maybe, them being enchanters, I should do some constructs as well... I know in the one-off game I played I gave them Enchant Weapons, etc. So if they're more the "Make Magic Weapons and Armour" sort of enchanters maybe I don't. That's one thing I find kind of silly about Frostgrave - the whole making weapons magical during combat and them embedding the enchantment after the game. I'd rather the ability to enchant weapons and armour were more like animating constructs - something you do out of game... but I guess they couldn't have ALL the enchanter's spells being out-of-game spells... also the ability to make things better than just +1.... if it had been an out of game spell that might have been easier - if each spellcaster could only enchant ONE item per game - it'd be less cheesy to allow them to improve the enchantment on certain weapons of their own crafting (you would essentially have the choice of making more weapons/armour at +1 for more of you warband members OR improving the enchantment on existing magic weapons/armour - but each successive improvement would be harder to cast and there could be some upper limit to how good they could get...

I also have a similar batch that I was going to paint in greens for the Green Wizards I am in the current campaign we just started. Why exactly I started with the Gold Wizard’s warband when I’m currently using the Green Wizards….? That is a really, really good question… and I have no sensible answer at all for that... It seemed like the thing to do…? They’ll be next.

I have some new ruined sity terrain I’ve been working on – perhaps I’ll finish them up and post some pictures. I do hope to get in a game of Frostgrave with the family – either this evening or tomorrow – so perhaps I’ll havea game report. Also I have plenty other figures for Frostgrave or Lion/Dragon Rampant on the workbench…
Posted by tim at 1:56 PM