…and now for something completely different…

Last week a package arrived from Mike Bravo Miniatures. Mike Bravo Miniatures is a new-ish company out of the UK that produces modern figures. I can’t even recall how I came across them… probably Wargame News and Terrain Blog...? At the time I placed my order they had only three packs available for pre-order so I ordered all three; British Infantry in Flak Vests and Paramilitaries in Balaclavas from their “State of Emergency” line and War Correspondents from their “Modern Miscellany” line.

From their blog and news page it looks like they’re planning some Cold War Americans, Modern Africans and IDF, and more 1979 State of Emergency figures.

Currently they are running their own crowd-funding campaign to get some more packs made for the State of Emergency line. I am seriously tempted to order a bunch more...

I had hoped to have them all painted up quickly, but I got busy with other things this last week, so here’s what I’ve painted so far.

I like these figures, they’re nice, beefy miniatures with fairly solid weapons, easy to paint details. (That being said, despite the very good packaging, on of the FN barrels did break off in transit… as the forestock was too slight for my wee drill to drill into I had to carv off the lower half of the forestock to the hand and drill into the hand to insert some wire for a new barrel and then rebuild the forestock with green stuff… It happens – seems to be the bane of all British modern troops of all manufacturers – whether armed with FNs or SA-80s - the barrels are prone to breaking off… can you tell which one it was?)

Below are a few comparison shots of other modern British (and others armed with FNs)...

(Mongrel Miniatures are more or less out of print – they are, in theory, available from New Line Designs but they haven’t been in stock for years and most codes have been dropped from their catalogue - but people have them so I included a few) 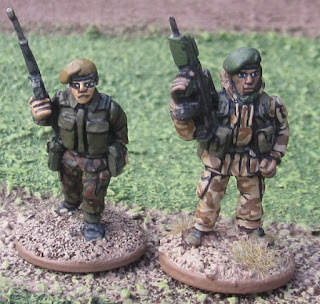 Here is the standing rifle up with the only other modern british soldier I could find with a rifle up – from the out-of-print Devil Dog Designs. DDD kindo f dwarfed all other moderns (except, perhaps, Victory Force Miniatures)

While the Mike Bravo Miniatures tend to be on the slightly beefier side, I don't think it's nearly enough to be concerned about. but I've never been that fussy about miniatures - once they're all on the table no one will notice the differences that are more apparent when you line them all up next to each other. I think differences in paint jobs an dbasing stand out far more than slight variations in scale... 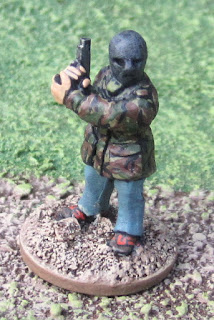 The rest of the figures from Mike Bravo Miniatures. Then…? There are Dwarves and Seljuks, and Wizards and Hobbits and all manner of other figures crowding my painting table at the moment… perhaps it’s time for a clear off again…
Posted by tim at 11:50 AM