Here are the Marines I have (painted, so far...) organized for use in the current version of Warhammer 40,000: Apocalypse!

The entire force (so far!)

As with the Eldar, these were previously organized for Future War Commander - where an element is an element and the number of figures on each stand wasn't really important, so I wasn't really fussed about having the correct number of itty-bitty warriors on each stand. Consequently, a number of these elements have less than the basic number of models that should be on a stand - in these cases I assume that it represents the basic/minimum number that would be in a squad - for example,  you can field Terminators in squads of five or ten, my stands have only three on each of them (because I only had a handful of them and I wanted more than just two squads (plus a few spares left over) and needed something I could use as a CO/HQ element - so I did four stands of three plus a smaller stand of just one - which would represent the HQ element.

This was meant to be my overall command detachment (well... at least until I get a Supreme Command Detachment sorted out... ), but I've come to the realization that it is NOT a legit detachment. I have four Land Raiders in it as Transport for each of the Terminator squads... but those are actually classified as Heavy Support - not Dedicated Transports - and, as such, only two are allowed in a Vanguard Detachment.... The alternative - fielding it as a Spearhead Detachment also doesn't work as only two Elites are allowed in such a detachment...

I've also realized that, if we're assuming that each of these elements is a "Counts As" full-sized squad of FIVE Terminators... there is no room in the Land Raiders for the Captain... I'd need a fifth, just to ferry him around!

Feh! they're all MY toys, I can make up whatever rules I want, right?


So that's about 399 Power Level. Just like I have for the Epic Asuryani Warhost. 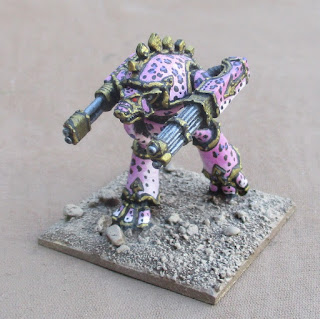 I do have this Warhound Titan painted up (and Epic version of Pardus Purpura, that could be added to this force as an Auxiliary Super Heavy Detachment - that's another 60 Power Level...

I have at least three or four more Battalion detachments worth of Tactical Marines to paint up. One of which I have enough Rhinos to mechanize - although I may not and instead use those rhinos to ferry around HQ elements for some of the other detachments... I also have five older pattern Land Raiders that I originally planned to use as transports for one of the Marine Battalions... but as I've recently realized - they're Heavy Support, not DEDICATED TRANSPORT - and as such, I shouldn't really HAVE that many in a Battalion or Vanguard Detachment.

I also have enough bikes to put together another Outrider detachment with those.

I also have a few Land Speeders... not sure if I have enough for a detachment of their own...?

I also have large forces of Orks, and Squats and Imperial Guard and even some Chaos... as well as a few titans about 8-9 Warlord titans 3-4 each for Imperial/Chaos. I also have a Reaver and two or three war hound titans - all Imperial. And then there are three Eldar Phantom Titans!? It could get CrAzY!? for now I guess I should just get in a game with these two forces to start with and see if it even works out...

Hopefully MORE Necromunda games... but before that there will probably be some more painted Genestealer Cultists