Here's how it all rolled out..

At the beginning of the year we collectively picked ten games that we all agreed to play ten times - all together, as a family...

I tried to convince everyone to select games that they liked, and/or wanted to play MORE - to either learn it better or just because they really, really enjoyed it, and tried to stick to shorter games that didn't require a full day commitment. I really tried to stay away from and "Should plays" games that I feel like I "SHOULD" play because I invested a lot in it or I really like the IDEA of the game....?

Things started off well enough... we got a few games in... after a few months it was becoming painfully obvious that Finnegan just wasn't into it - he'd play the games when I suggested them and felt beholden to play them - because he HAD said he would - but he played them with zero interest or joy and basically played in such a way as to END the game as quickly as possible - regardless of the outcome or anyone else's fun... So I told him not to bother. We changed to "rules" of the challenge that it had to be a "majority" of the family. Then it became "as long at me and Amanda" when Keira complained that "how come Finnegan doesn't HAVE to play!?" and I was all, like, you don't HAVE to either - NO ONE forced you to do this!? GAH!? By half way through the year I was viewing them, pretty much as PERSONAL Challenges - though Amanda playing in, I think, all of the ones I recored, and Keira played in MOST of them... and Finnegan joined us for the occasional game.

In the end, of these we managed to play:

As fall rolled around it became painfully clear that we weren't going to get through all of them - it was starting to look like there were a few we just might not play AT ALL!!? So I more or less decided to abandon the 10x10 challenge and tried to focus on a 5x5 challenge for the final quarter of the year (and resolved to just stick to 5x5 Quarterly challenges from now on!)

Hellboy: The Boardgame
Castles of Burgundy
Shadowrun: Crossfire
Race for the Galaxy
Abyss

Hellboy got on there because I knew we'd be getting it for Xmas and our plan had been, since we kickstarted it a year and a half ago, that that is what we'd do for the holidaze this year - play through a bunch of the scenarios. Three of the others were ones we were CLOSE ENOUGH to finishing off 10 games that I put them on there in hopes of finishing off at least HALF of the 10x10. Shadowrun: Crossfire... well... that's Keira's game and she SAID she still really, REALLY wanted to play it... so...

Of THOSE, what we actually played in the final quarter was...

3x Hellboy: The Board Game
4x Race for the Galaxy
1x The Castles of Burgundy

So... STILL didn't get in ANY games of Shadowrun: Crossfire, or any MORE games of Abyss...

In addition to the "Family Challenge" I decided to set a few more, personal, gaming goals... this is where I snuck in a bunch of "Shoulds" - Games I felt like I SHOULD play more of... and for the most part failed...

barely got any of these done...

I did play over 10 games of 40K, a half-dozen games of Wrath & Glory, three games of Kill Team, ONE Phil Eklund game (High Frontier) and NOT ONE GMT/COIN game!?

Despite the moderate success of the Family Challenge and the mostly failure of the Personal Challenge, we did get in a LOT of games this year... According to Board Game Geek, this is what I played:

183 games I played in total... a good chunk of them with the family. We set out to do a Challenge to play 100 games with the family... and a further 50 games of my own. I may not have played EXACTLY what I planned... but I got in a few enough games!

And this doesn't even include all the Role-Playing Games the kids played (I only log the games I play!). For almost the entire year, Finnegan ran a weekly RPG game on Saturday afternoons. It started off as Dungeon Crawl Classics, then over the summer he wrapped that up and started a D&D 5E game in the fall - which has, just now, come to a conclusion.... sort of... He's starting a NEW D&D5E campaign in the new year... in, more or less, the same setting - his own world... but a few years later...? In addition to the Saturday game, he's been playing in a campaign on alternating Tuesday evenings, and for the first half of the year was playing in ANOTHER D&D game in the tabletop games club at the local high school - while running a Star Wars: Edge of Empire game for the same club on a different afternoon. Since September, he's been running the D&D game on Wednesdays after school.

All the while the guy has been VERY involved with playtesting new Four Against Darkness adventures and rulebooks for Ganesha Games.... 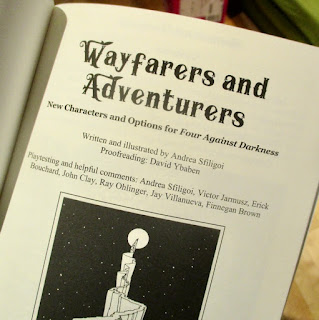 So he may not have been participating much in our challenge - but he was still playing a LOT of games... just more role-playing games... and with his own friends!

I had hoped to get some regular board game afternoons going on Saturday afternoons... But that just didn't happen... for a variety of reasons. Mostly because I'd planned to play the games downstairs in the new game room (while the kids were playing role-playing games in the kitchen) and... well... the Game Room renovations just didn't get finished.

Next year I'd at least like to get a Game Evening going on Fridays!

I did plan and run a Game Weekend in February. Originally I'd planned to run Kill Team campaign weekend... but then I finally got my mitts on Wrath & Glory and I was SUPER STOKED to play that... and so I ran that instead... unfortunately I ended up having WAY TOO MANY players - would have been a GREAT number for a Kill Team campaign... too many for a role-playing game marathon!!!

As per the last few years, I had planned to run a game (or GAMES) at ToonCon in the fall... but early in the year, after my Game Plan was decided, the organizers of ToonCon decided not to DO ToonCon this year and made plans to move from the fall to the spring (too many other things going on in the fall!)

So I decided to host a fall game weekend myself. A number of people had indicated that the (Canadian) Thanksgiving weekend would potentially work for them, so I began preparing... the Short version of a long story: Didn't Really Happen.

I'd really hoped to play more role-playing games this year...

The KIDS sure played a LOT of Role-Playing Games - or at least Finnegan did!

I started out the year in a Call of Cthulhu game that my friend Bruce was running. But I ended up dropping out of it - there were just TOO many players... and... I just didn't love the system... For all of it's failings, I like the Savage Worlds Cthulhu a lot better...

I had different plans at different parts of the year... some I managed to complete. some were hopeful wishes that were abandoned in favour of OOH! SHINY!! Regardless of the success or failure of each plan I DID get a fair bit painted this year... maybe not as much as previous years, but still, quite a bit. there's a whole PAGE devoted to what I did - with links to each page where I posted each of the painted items:

In short however I painted...


The bigger failure was in the acquisition department... I bought WAAAAAAAAAY more than I should have... More than I could paint... more than I really even have ROOM for anymore!? A LOT of them were "TOO GOOD DEALS" that just couldn't be passed up. Others were things I figured I should GET NOW BEFORE IT GOES OUT OF PRINT!

Definitely need to reign that in and just get some stuff PAINTED next year!!!!

I was supposed to have cleaned out the basement, did some renovating, added some lighting, built some bookshelves, etc, etc... I did clear out the room... sort of... and dismantled my old, gigantic gaming/hobby table... but that's as far as it got... maybe next year.... This past week I DID do some work on the drywall in the stairwell LEADING TO the game room...? There may be hope yet!


I Hope YOU all had a FABULOUS year of gaming and doing all of the other fun-but-not-so-gamey things that you do. Do let me know in the comments what the highlights were for your year!

We've played another game of Hellboy that I hope I'll get a chance to do a game report for - and we'll probably get in another game tomorrow, hopefully. I have been painting up a storm the last few days, perhaps I'll post a few pics of the stuff I finish up in the next few days.