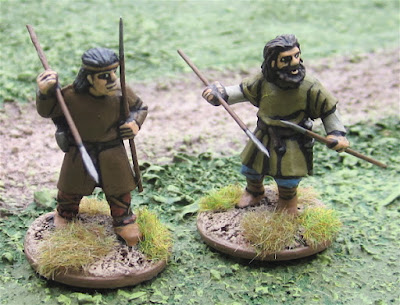 Two Javelineers for Frostgrave. The figures are from Crusader Miniatures. I think I got them as part of a ready-made army for Lion Rampant - I think they were supposed to be part of a unit of bidowers. They didn’t really look all that much like medieval bidowers to me so I set them aside and wondered what I might do with them. If I’d gotten back to Song of Shadows and Dust I might have painted them up for that… 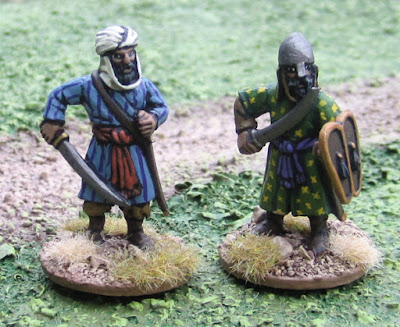 Two more for the medieval muslim themed warband for Frostgrave – another Thug (with just the sword) and a Man-at-Arms (with sword and shield). The figures are from Black Tree Design. Four Corssbowmen. These figures are also from Black Tree Design. 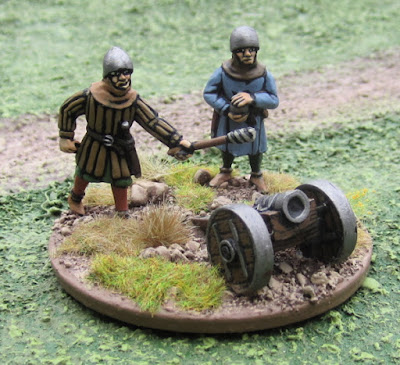 Finally… a medieval bombard team. I though I might use them in Dragon Rampant as a reduced model unit of Heavy Missiles… though 12 strength points seems a bit much… It’d make more sense with 6 strength points. I suppose I could make them “Fearful” (at -2 points) which, in effect, would make them a little more brittle… 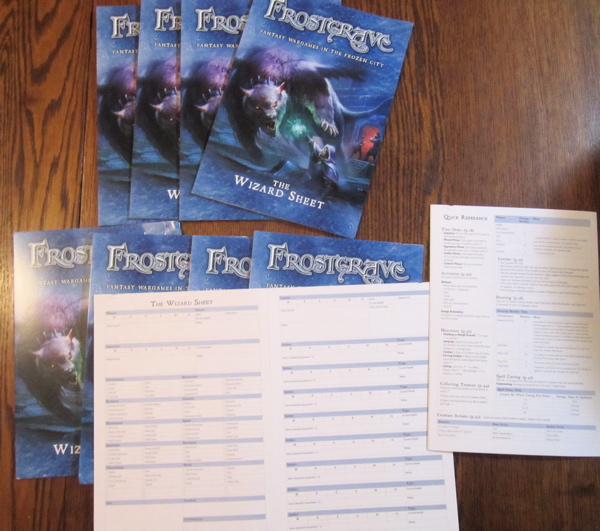 Oh, and these showed up! They're way snazzier that I'd imagined - they're printed on really nice cardstock - that looks like it could take a lot of erasing! The only downside is that, despite the padded envelope, the posties really hammer on the package and pretty much all of them have some serious dings and dents and bent bits... Originally I thought I'd hoard them all for my self, but I've decided I'll keep four for the family and the other six I'll use for the Frostgrave campaign next weekend.

Still hoping to get in games of Frostgrave and En Garde! (though I'm starting to feel that En Garde! isn't going to happen until AFTER the Wargaming Birthday Bash/Winter Wargaming Weekend - or maybe we'll play it on the Sunday - after the Frostgrave Campaign...?

There’s a PILE of Halflings on the workbench along with a bunch more Medieval Muslims.

I’ve also bee working on some new terrain – and took a few process pictures along the way, I’d like to organize them into some sort of post… it may not be a “How To” so much as a “here are a few pictures to give you an idea of how I do things”… We shall see…
Posted by tim at 9:52 AM