(This is a work in progress) 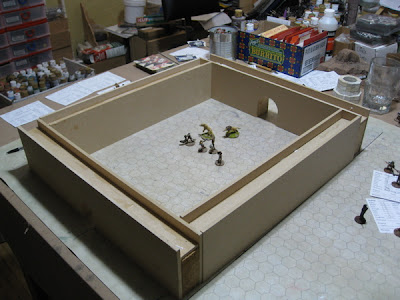 These will double as walls for the arena in our Gladiator Campaign and also walls for a fort.

I still need to texture and paint these, but I think they're useable enough for tonight's shenanigans.

I've still to make some corner pieces. I will make a set of four that are simple right angle wall turns - for the arena or a less-well-defended town/fort. Bring rather modular, however, I will also, at some point, build some turret-like corners for a better fort/fortified town.
Posted by tim at 5:11 PM 4 comments:

…of Sword and Sorcery…

These are (mostly) historical Dark Age Normans. I have to admit I am painting them up for potential use in upcoming fantasy skirmish/adventure games. I like the dark ages as a backdrop for fantasy games (rather than “high mediaeval”). 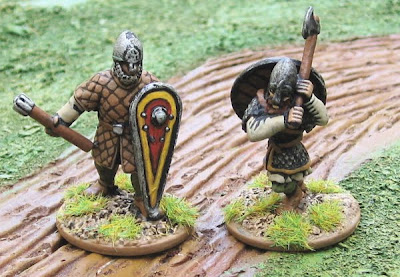 Another Norman (left) from Crusader Miniatures and an Anglo-Danish Huscarl from Old Glory. 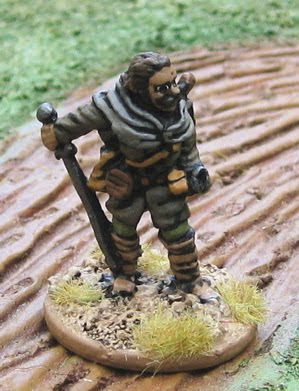 This is an ole “D&D” figure I’ve had for over 25 years. I’ve stripped layers of paint off this fellow and repainted him. I have no idea who manufactured him.

There be dragons lurking about the painting table… and zombies… and Elves and Dwarves…. and some modern British(!?)… and even a few Zulus still.

Started playing a bit of Savage Worlds with the kidz last week and they are super pumped!! So in anticipation of further fantasy adventuring with them I’ve started working on some fantasy skirmish figures. Also thinking about digging out the HoTT stuff for some larger conflicts.

I also pulled my games from Toon Con - for a variety of reasons - (sorry John…) so I’m feeling a little less pressured to get hordes of Zulus done NOW!! I’m hoping I’ll have enough to play isandlwana by my birthday bash weekend (February) and Vimy ready to go again for the anniversary (April). 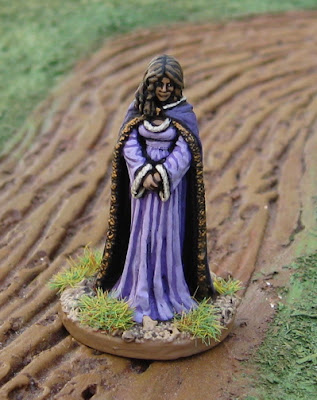 This is a figure from Dark Sword Miniatures. My firend Mikey K had ordered stuff from them and had it sent to me to paint and they threw it in as a freebee and asked if I’d say nice things about them. I don’t need to say nice things about them – it should be clear to anyone that has operating EYES that they make some very nice miniatures (still, it was pretty nice of them to throw in the bonus figure…). In purple because the girls loves purple… 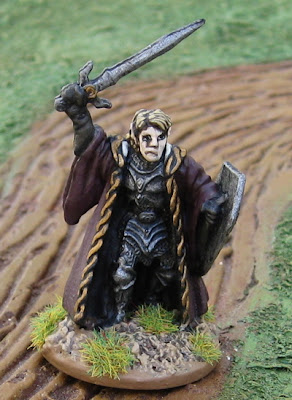 This is an Elven Prince from Reaper Miniatures. Got it dirt cheap in an ebay lot… 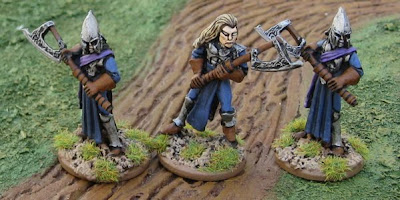 Some more Elves. These are from West Wind Productions’ Dwarf Wars line. How did I forget to paint his eyes!? That looks a little creepy… 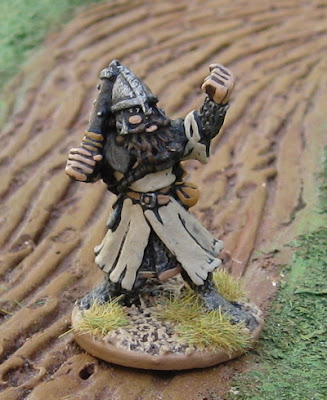 An old school citadel miniature. Probably a warrior priest of Sigmar or something… He’ll make due for a fightin’ cleric of one faith or another… 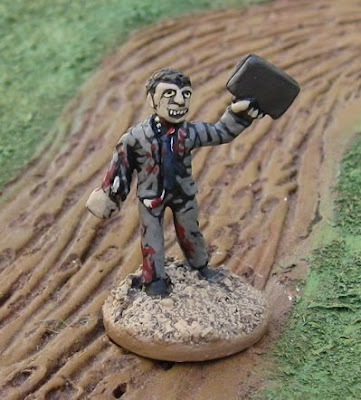 Tommies, Jocks…. and Another Zombie

I'm having a fairly productive, if somewhat random, week.

A few Tommies and Jocks from Renegade Miniatures 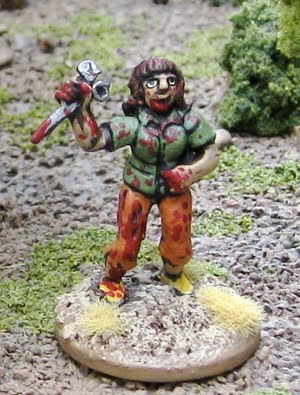 Another zombie from Mega Miniatures (NOT in her underwear!)

Zombies… and probably some other stuff…
Posted by tim at 8:42 AM 2 comments: 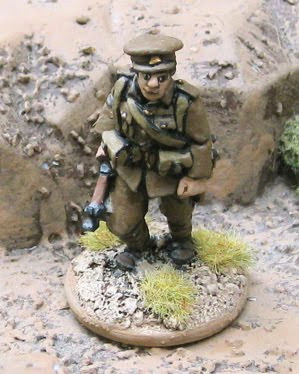 Five “Professionals” from Wargames Foundry (I THINK that’s what the pack was called…). 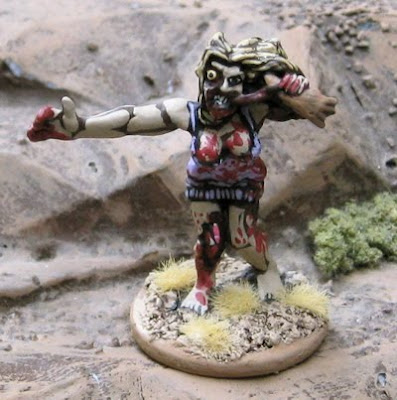 ANOTHER ZOMBIE!! This one is from RAFM. 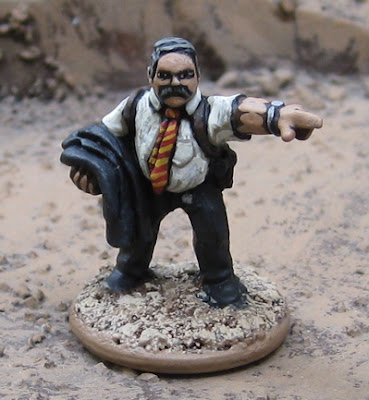 Well… Not a Zombie… Another one of the “Lovemore Detective Agency” pack from Wargames Foundry. 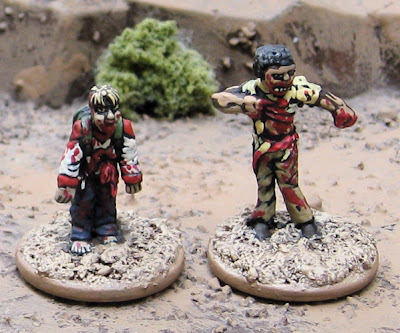 ZOMBIES!! The junior Habs fan is from RAFM and the other one is Mega Miniatures. I fyou can’t quite tell what the Mega Mini is doing it looks to me like he senses something isn’t quite right and is pulling up/tearing apart his shirt to figure out what’s going on… 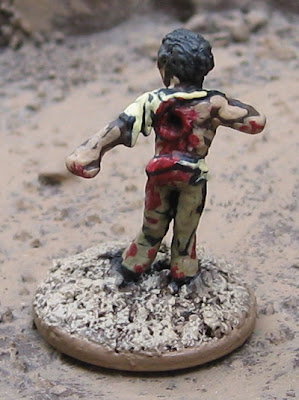 On the back side, things are a little more apparent – a gaping hole has been blown through him!?

Did someone say they wanted to see Zombies…?

A week or so ago I read the first four volumes of the Walking Dead graphic novel series. This last week I watched season one of the AMC TV series…. 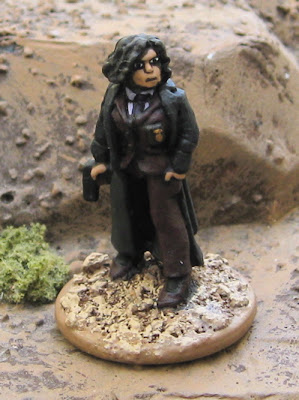 Not a Zombie… and not really a cop either. This is “Penny Lovemore” from the “Lovemore Detective Agency” pack from Wargames Foundry. She’ll probably be used more often as a Special Investigator for the FBI (or RCMP? Or whatever…) perhaps investigating the ridiculous claims of a zombie invasion…?

ZOMBIES!! The School Crossing Guard is from RAFM and the other three are from Mega Miniatures 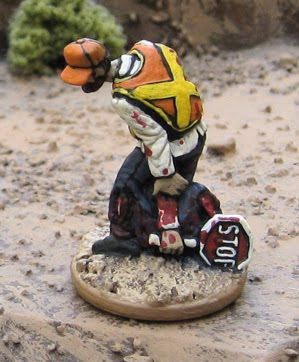 Here’s the back side of that crossing guard.

This brings my Zombie Horde up to 23. I have another 28 or so to paint (mostly from the Mega Minis pack). Is that enough…?

(and a pair of Jawas)

As with all the Star Wars figures I’ve been painting lately, these are all old Grenadier Miniatures/West End Games figures. 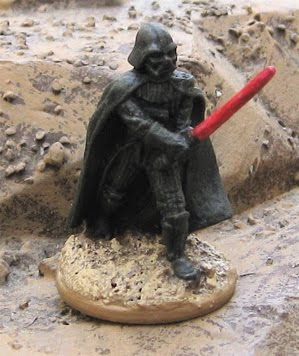 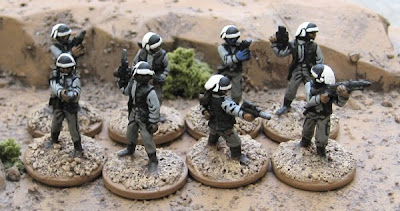 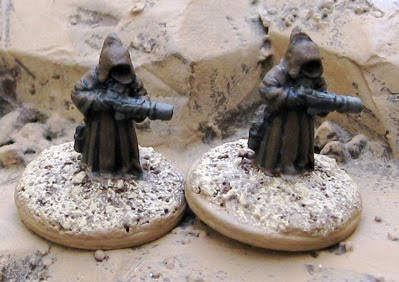 Hopefully I’ll be able to cobble a quick game together with all these guys soon..

Wow…Once again, I’m kind of feeling all over the place right now… could be more Star Wars stuff… or Zulus… or the Martians that made it back onto the painting table.. or Great War stuff… or some Zombies…
Posted by tim at 1:17 PM 3 comments:

Taking a littke break from the Zulus, I knocked off a number of Imperial Stormtroopers over the weekend along with a couple other Star Wars characters…. and a couple of Zulus…

Anyone notice anything funn about these guys…?

Anyway, I should have enough to run a little skirmish game now. Here are some potential heroic foes: 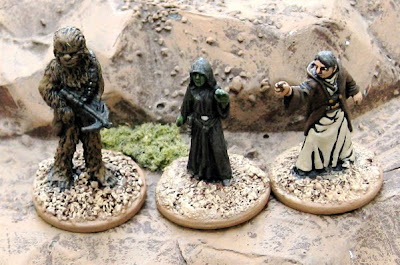 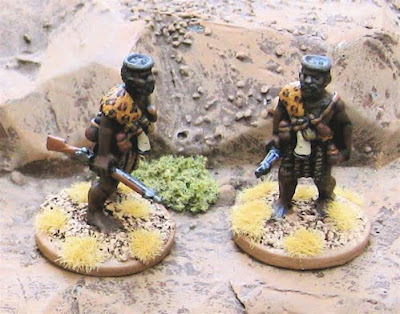 Hopefully more Zulus – I’d like to get at least one more unit done for Friday’s game!!
Posted by tim at 8:44 AM 11 comments:

More Zulus (and other stuff) 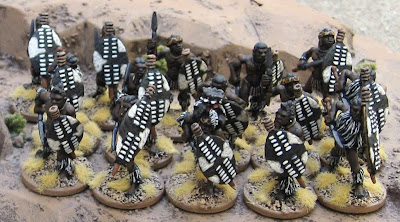 Another unit of Zulus from Black Tree Design. 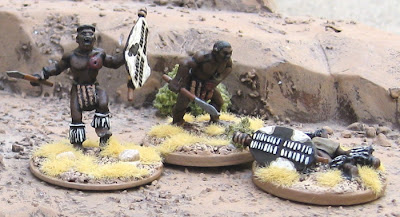 A few more Zulu casualty/morale failure markers – the two still standing are from Wargames Foundry , the prone fellow is from Old Glory. 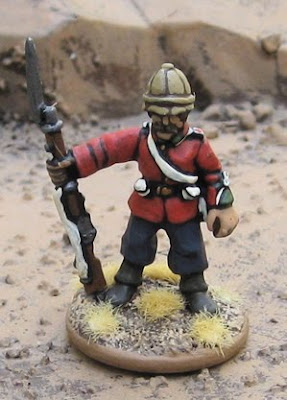 Another odd British infantryman – also from the Foundry. 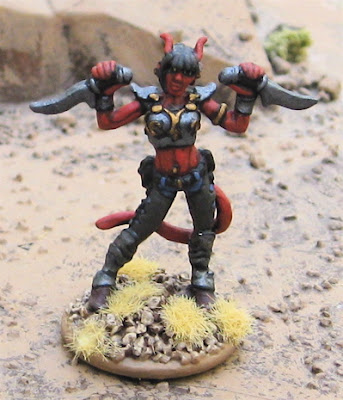 Um… Hellgirl? This is a Reaper Miniatures figure I was shipped this by accident a few years back… I’ve been reading Hellboy lately… I briefly considered converting the armour to look like a BPRD vest and convet one of the hands to be holding a BIGASS gun… but then I got lazy and just painted it as is.

More Zulus. I think I’m going to put the Martians on the shelf until the Zulu war stuff is finished.

I also need to get cracking on refurbishing the Vimy Terrain.
Posted by tim at 11:37 AM 4 comments:

Toon Con 2011 is coming up in October. I’m planning to run a few games there. It seems like the organizers are trying to actually get stuff up on their site as they are hastling me (okay, one email and a friendly inquiry... a couple weeks ago...) about getting them info about exactly WHAT I’m going to run…

Who’s coming and what do you want to play…?! Here’s kind of what I had in mind:

I thought I’d run my Vimy 1917 game again. The game focused on the Canadian 4th Division’s assault at the far right of the line.

I have some work to do on the trenches. First of all, the figures are on new bases and no longer fit in the trenches. Also I kind of rushed the terrain and never really had the time to finish them up the way I’d have liked – with duckboards and revetting and sandbags and such. I might also make some newer (bigger) barrage markers. Otherwise everything is good to go for this one – figures complete and I more or less have a handle on the rules (the same modified Contemptible Little Armies I used last time)

The game is played with four players (all Canadians) with me playing the Germans (though last time I had a helper – Will – and that turned out to be very… well… HELPFUL!!)

I’ve been pretty interested in the Zulu War of 1879 lately and been getting a lot of stuff ready for it. My eventual plan is to play out the campaign using Mark Fastoso and Roy Jones Colonial Campaigns: The Zulu War, 1879. I’m not sure if I’d have enough stuff for any of the big battles/scenarios presented in the book… or exactly what rules I’d use – probably something cobbled together based on Ever Victorious Armies – with a few ideas stolen from Black Powder and The Sword and the Flame.

Alternatively I could do something VSF/Space:1889-ish… using the same rules (with some additional tweaks) and half of the same figures (the British!)

I probably wouldn’t be able to do BOTH, however.

There are any number of Savage Worlds skirmishes I could throw down at the drop of a hat – so this is the one I most need feedback about… (so those who are coming – what would you sign up for and play!?) Here are just a few ideas:

Vietnam
Patrol/Sweep? Assault?
Up to four players – Easch player controls a squad of US soldiers vs. GM controlled Viet Cong.

Zombies
Players must collect supplies and get off the table while avoiding zombies
4-6 players – each plays a wild card character vs. GM controlled Zombies.
Need to make some new terrain

Realms of Cthulhu
Heroes trying to stop evil cultists from summoning other worldly evil.
Up to 6 players – each player controls a wildcard hero vs. GM controlled cultists.

Rippers
Monster Hunt.
Up to 4 or 6 players – players control a Wild Card monster hunter (and their allies extras) versus GM controlled monsters.

WEIRD War 2
As WW2 above, but with extra added weirdness!?

Age of Sail Naval Battle
Up to six (eight) players – Each player controls a single ship of the line.
This might take a long time to play… with that many players…

Fantasy
Defend Village against an orc/viking raid…?
Up to four (or six?) players – Players control heroes and villagers vs. GM controlled raiders
(might need to paint a few more Orcs…)

Sci-Fi
It’s a bug hunt. Colonial Marines (or something similar) trying to get back to their ship on a jungle world infested with alien bug creatures.
Up to four players – players control teams of colonial marines vs. GM controlled aliens

…. I’m sure if I thought about it a bit I could come up with some more… ideas?

Earlier I had considered some big battle De Bellis Antiquitatis or Hordes of the Things Games… or some Black Powder or Cold War Commander or Blitzkrieg Commander… But that’s just not where I’m at these days… and I don’t want to overdo it.

I might actually like to PLAY some games over the weekend!? (Expecially if Bob comes out and brings HIS HOTT game!?)
Posted by tim at 9:04 PM 6 comments:

Labels: Game Plan 2011, Savage Worlds, ToonCon, Vimy, Zulu
Newer Posts Older Posts Home
Subscribe to: Posts (Atom)
"There are some who call me.... Tim"
Welcome to Tim's Miniature Wargaming Blog. Here you will find reports (and pictures!) of games I have played as well as news (and pictures!) about my current modelling and painting projects.