The Bronze Gates Campaign started out as a Necomunda Dominion campaign I was running for my family to try out the system. As interest in it petered out, I kept using it as a setting for a narrative campaign. My own little slice of the Hive Primus Underhive.

We are no longer keeping tack of credits - the campaign "system" is run more like a Kill Team campaign - gangers are added to the roster, as required, and with whatever equipment seems reasonable. The only things we are still keeping track of are Experience Points, Reputation, and who controls which Territories (some of which still confer some advantages - just not credits). Standing within the campaign is based on Reputation and the number of Territories controlled.

The Bronze Gates region of Necromunda was abandoned hundreds of years ago when a hivequake buried most of the access ways and the Mechanicus Overseers determined the rubble was too unstable to bother trying to shift. In recent years some of the blockage was shifted when subsequent hivequakes caused into to collapse into a lower region. A single precipitous bridge allows access the region, through a gigantic set of bronze gates.

The Gates themselves are severely warped and twisted permanently open, they give name to the region, however, because all must pass them to enter the area.

New occupants have flooded into the area, hoping to escape their perilously over-crowded homes, like a highly pressurized gas, spreading out to fill a void. As a newly settled area no clan gangs have laid claim to the area, so there has been some friction and gang warfare along with the influx of new inhabitants.

Wenz Pipe (Narco Den) - Crimson Wave
A narco den set up in a collapsed roadpipe. Madame Wenz can chase away the worries of the most troubled of underhivers with chems and smokes of an astonishing variety.

D52 (Gambling Den) - Pink Punchers
Fortunes are won or lost (mostly lost) at cards and dice at D52, where there is always an open table. Credit is extended to regulars, but debts are expected to be settled promptly.

Slop Pile (Refuse Drift) - Durango Pipe Moors
A vast cavern at the bottom of a shaft that upper hivers use to dump their waste thinking it drops clear to the hive bottom (or lower). Many in the underhive without marketable skills sift through the piles of refuse for reusable materials.

The Pit (Mine Workings) - Average Joes
In the lower parts of the Bronze Gates there remained an access to a deep mine shaft, abandoned when the community was initially abandoned hundreds of years ago.

The Furnace (Smelting Works) - Average Joes
Next to The Pit are Smelting works to process the ore brought up from the mines.

The Bronze Gates (Toll Crossing) - Average Joes
While the gates themselves present no obstacle to entry, the bridge that accesses the gates is widest and, by far, the easiest way to enter the region. Whoever controls the Gates can exact a hefty toll on any that wish to enter or leave…

Shrine of the Sinners Past (Bone Shrine) - One-Eyed Red Snakes
A large shrine built by Redemptionists of House Cawdor from the bones of those that died down in the Bronze Gates in the hivequake.

The Machine (Archaeotech Device) - Uncontrolled
A vast and complicated apparatus that fills an entire dome that was found still apparently running on its own after hundreds of years. No one is quite sure what it was originally for… but some more curious and experimental types have found a few uses for it – well, those that didn’t die while conducting their “experiments”…

The Burn Tanks (Promethium Cache) - One-Eyed Red Snakes
Vast reserve tanks of Promethium, abandoned and long forgotten, now provide fuel for anyone in the Bronze Gates that has need to burn anything…

Rock Pile (Wastes) - Uncontrolled
Not rock, per se, but a vast area of rockcrete rubble and twisted plasteel – vestiges of the hivequake that buried large portions of the region hundreds of years ago.

Doc Clemens (Rogue Doc Shop) - Pink Punchers
Doc Clemens used to live in the spire and was a private chirurgeon to the rich and shameless. She developed a bit of a drug problem, though, and ended up discredited and disgraced after a few misdiagnoses and losing a patient under the knife (who happened to be the daughter of a very influential Spyrer). She fled downhive and now tends to the dregs of the hive in the Bronze Gates.

Bung’s Hole (Drinking Hole) - The Crimson Wave
Bung runs the only place to get Wild Snake in the Bronze Gates – along with an assortment of other varieties of rotgut and deep-fired corpse starches.

The Blood Bowl (Fighting Pit) - Uncontrolled
A place of entertainment for the denizens of the Bronze Gates - where they can cheer their favourite fighters and watch them beat each other to bloody pulps.

Porter's Lab (Synth Still)  - Uncontrolled
Eupheme Porter discovered an old laboratory and has set up a Synth Still - largely to supply Madame Wenz, but also to manufacture specialty concoctions for anyone that has enough credits.

The Puddle (Sludge Sea)  - Durango Pipe Moors
In the lowest reachers of the Bronze Gates there is a place to access a vast open area filled with an effluviant soup of waste water and chemical drainage from the upper hives. It is thought it might provide an additional access point - if one could take a boat across to the far side... before it disintegrated in the caustic fluids that fill the area...

The Snake Den (Settlement)  - One-Eyed Red Snakes
A remote and dark settlement thought to me mostly members of Clan Delaque. They keep to themselves and don’t take kindly to visitors… if anyone dared to wander out that way…

Punchville (Settlement) - Pink Punchers
Right near the centre of the action. Home of he Pink Punchers Escher gang, it is known for its lively boxing and mud wrestling matches.

The Smelly Pit (Settlement) - Average Joes
The dark and foreboding hole accessed by precarious ladders and gantries. Foul odours enamating from the pit give it its name. It is the home of the Average Joes - a strange gang with no apparent house/clan affiliation.

The Sisters of Mercy Convent (Settlement) - The Crimson Wave
Once a barracks of an Adepta Sororitas Convent on Necromunda, the Crimson Wave Escher gang, and their hangers on, have taken up residence within.

These are the gangs vying for control of the Bronze Gates. I've noted what Clan House they are affiliated and who plays them. The ones designated as "for General Use" are gangs that I own that I loan out to other people to play who join us for games, but don't (yet!) have a gang of their own. Or I might use them in narrative scenarios at one point or another...

Durango Pipe Moors
A House Cawdor gang for General Use

Jezebel's Crusade
Another House Cawdor gang (sort of) for General Use

Reputation: 2
Current Territories:
None. These are hive dwellers that just come downhive, occasionally, to bring the Emperor's light to the denizens of the Underhive.

Here I will post pictures and backgrounds of various characters that populate the Bronze Gates that don't have any particular gang affiliation. 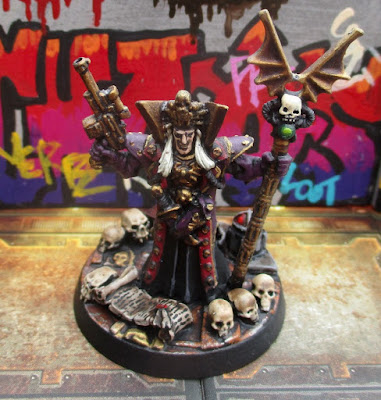 For ages, Valois has been but a dark, scary legend used to frighten children and keep them from wandering alone off into dark corridors of the underhive, so long has it been since he haunted the Underhive. Driven off by a crusade of Redemptionists decades ago, he was presumed dead... but rumours have recently been circulating that he has returned and taken up residence in a region below the Bronze Gates...


Battles for the Bronze Gates 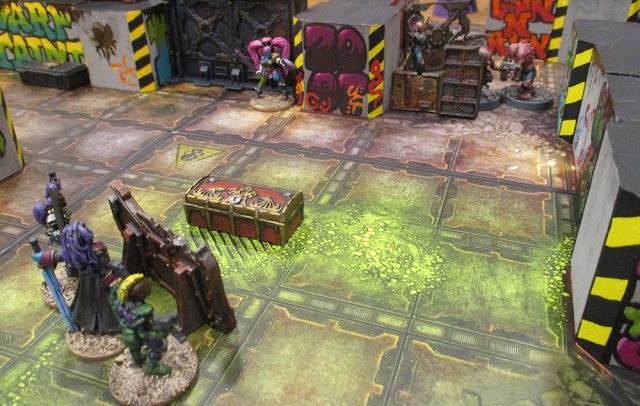 The Crimson Wave and the Average Joes Genestealer Cult battle for control of Bung’s Hole - a dingy drinking establishment. 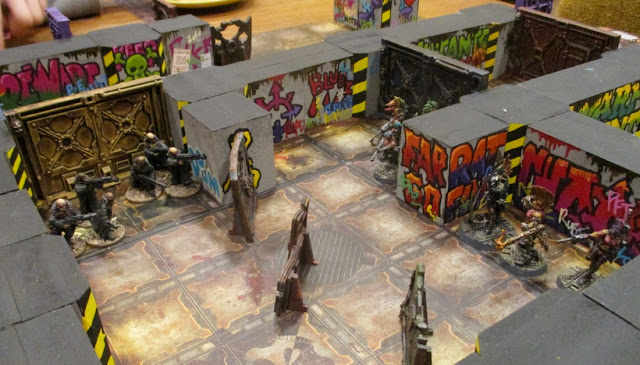 The Pink Punchers and the One-Eyed Red Snakes battled it out for control of D52 - the local gambling den. 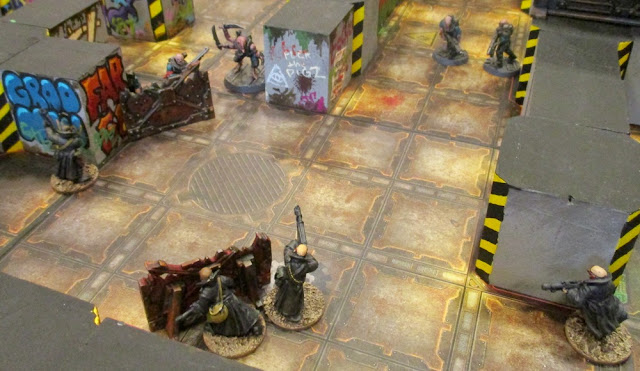 The Average Joes Genestealer Cult made their move on The Pit - a deep mine shaft that is rumoured to have no bottom. The One-Eyed Red Snakes tried to stop them... 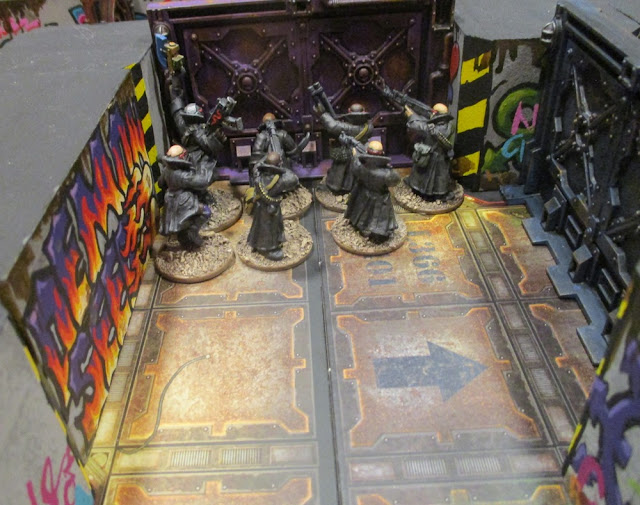 As House Escher is the main manufacturer and distributor of pharmaceuticals on Necromunda, one would think it would have been the two Escher gangs that vied for control of Wenz Pipe - Madame Wenz's Narco Den. Instead it was the One-Eyed Red Snakes that tried to seize control and the Crimson Wave stepped in to stop them.


Battle for the Bronze Gates 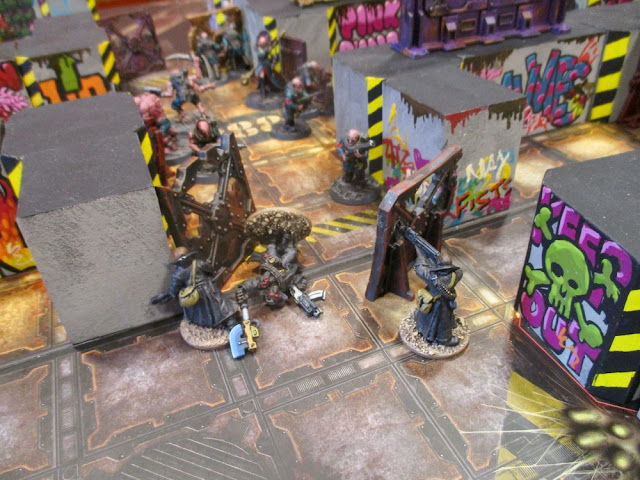 Eventually someone would make a move for control of the Bronze Gates themselves - the only way in and out of the region. It was the One-Eyed Red Snakes and the Average Joe's Genestealer Cult that clashed over it's control. 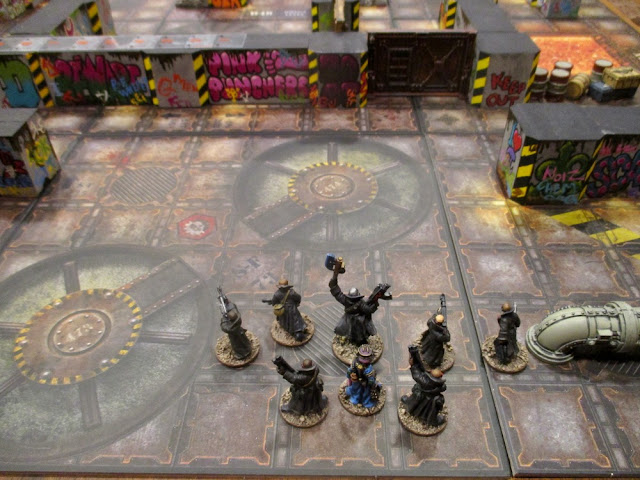 The One-Eyed Red Snakes were tasked with escorting Marissa Devol, a Guild Agent with close ties to house Cawdor and the Redemptionists, out of the Bronze Gates after a series of meetings with merchant in the region to secure trade deals. She said she would petition House Cawdor to have the One-Eyed Red Snakes maintain control of the Shrine of the Sinners Past (Bone Shrine) as there were no representatives of House Cawdor residing in the Bronze Gates at this time. The Crimson Wave had their eyes on the Shrine and were determined to humiliate the Snakes and ruin their standing with the Guild in order for themselves to take control. 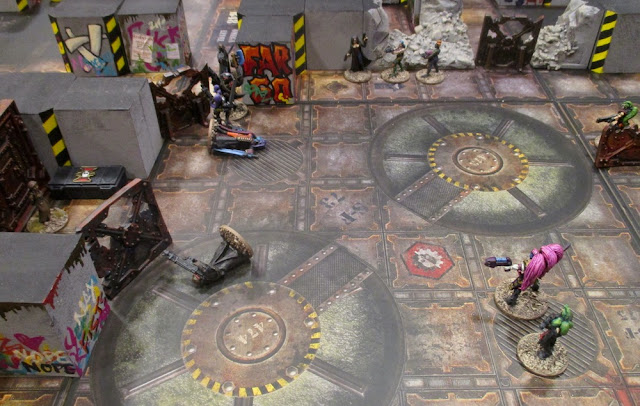 The Crimson Wave mounts an operation to rescue one of their own captured by the One-Eyed Red Snakes in a previous encounter instead of paying their totally reasonable ransom request...


For All Those Who Seek Redemption 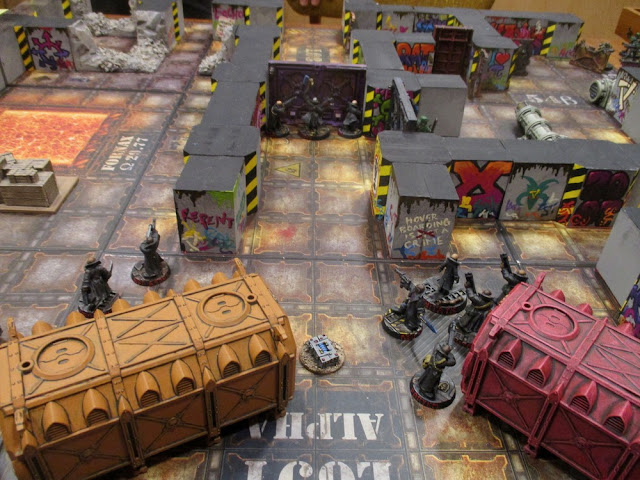 House Cawdor has moved into the Bronze Gates. The One-Eyed Red Snakes decided to try and put them in their place and assert their dominance over the new gang. 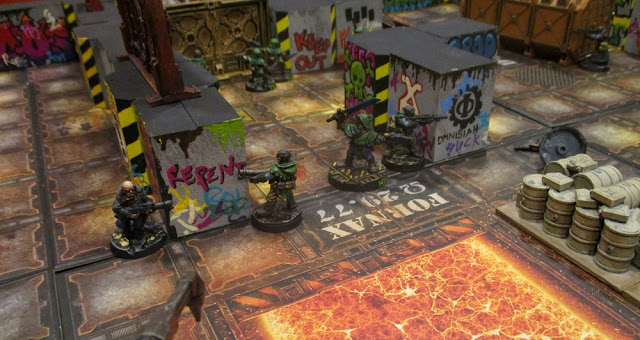 The One-Eyed Red Snakes seek revenge against the upstart Durango Pipe Moors after their last encounter - and also make sure they didn't snatch up control of the Burn Tanks - a vast Promethium storage facility. 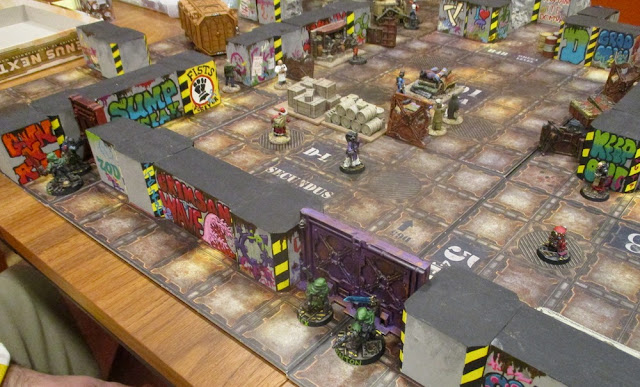 The tit-for-tat series of reprisals continues - the Durango Pipe Moors attack a market near the Snake Den to terrorize residents of the Underhive nominally under the "protection" of House Delaque - to show how impotent they are to prevent such violence...

More to come as the campaign for the Bronze Gates continues!

There are rumours that a VanSaar gang may soon be taking up residence in the Bronze Gates - as well as an Orlock gang - who have their eyes on the territories controlled by the Average Joes.

Ratskin Scouts, Scavvy Mutants, and Giant Mutant Rats worshiping Dark Gods have been spotted in the lower reaches, where they have come from is anybody's guess.

Spyrer hunters have ravaged other nearby communities, will they prey on the Bronze Gates as well...?