Herein you will find all manner of scum and villainy - my gangs for necromunda, plus an assortment of scum, mercenaries, bounty hunters, Spyrers, and other sordid characters... 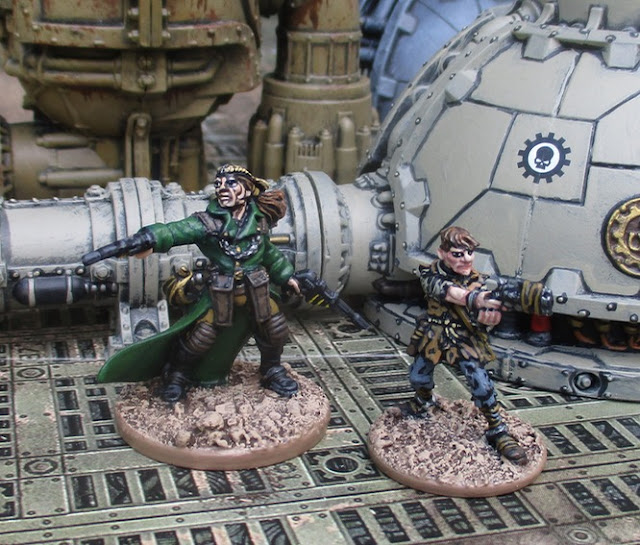 Not entirely sure what the Arbities would be doing downhive, dealing with matters that are barely part of the local Enforcers purview, but here they are none-the-less... 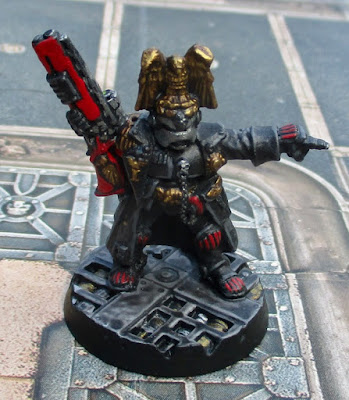 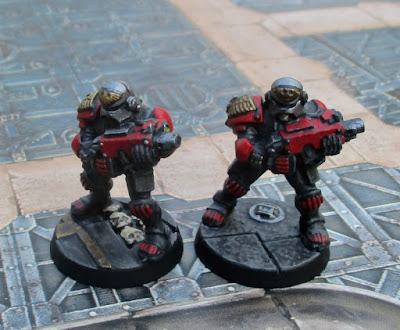 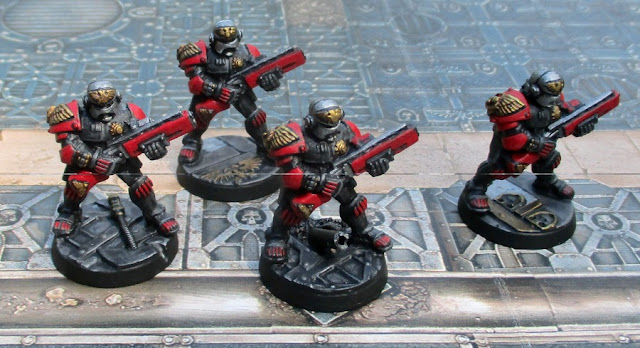 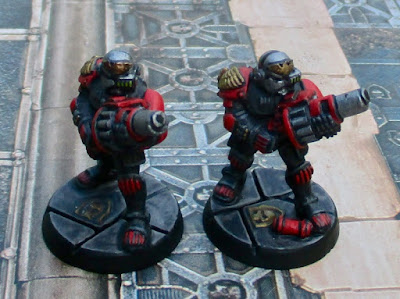 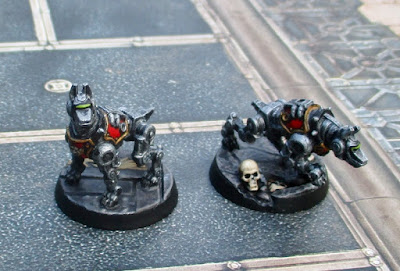 Saxon and Sampson (as Cyber-Mastiffs)
100 Credits (each)

The whole Gang. Almost enough for TWO Gangs... Almost... I briefly considered it, but the decided, since I only have one Heavy, I'd probably best just keep them all together. If ever I got a handful more (Including another Heavy) I might split them up - repaint the fringes of their tabards different colours to identify which gang is which. Or I might just convert some of these to have special weapons...?

House Cawdor is the stronghold of the Cult of Redemption on Necromunda. I didn't want to just do these guys in red and/or purple to match the Redemptionists... Somehow I came up with green...!? 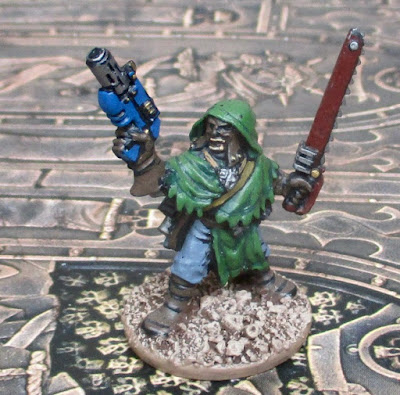 The leader of the gang; Willem Campbell - a dour firebrand who leads from the front! He is equipped with Flak Armour and armed with a Hand Flamer, Bolt Gun and Chainsword. (It's actually an Inferno Pistol he's carrying - the figure came with the original auto pistol carved off and I had this in my bits box and thought it looked cool... There aren't stats from Inferno Pistols - which are essentially handheld Meltaguns - but there are rules for hand flamers and I figure this could be passed off as one!) 260 credits. Not sure what other equipment to give him at this point, but I think I'll give him the  Commanding Presence skill to start. 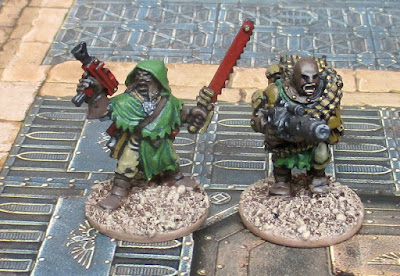 Rufus is Willem's lieutenant and is equipped with Flak Armour and armed with an Autopistol, Bolt Gun and Chainsword. 185 Credits - he will start with the Combat Master skill.

Henry is the Heavy - equipped with Flak Armour and armed with a Heavy Stubber, Stub Gun, and Fighting Knife. 245 credits - he will start with the Head Butt skill.... because it seems fun... 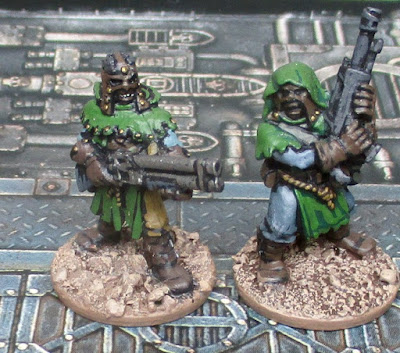 Brothers Liam and Lex deadly in combat, if they can ever stop arguing and only time they stop arguing is when they are in combat - usually with each other.... 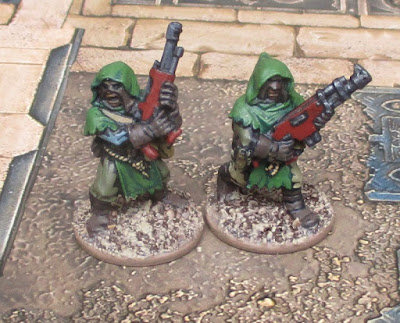 Muriel and Meredith, both are dutiful adherents of the Cult of Redemption. Their only desire is to purge the sins of others through bloodshed. 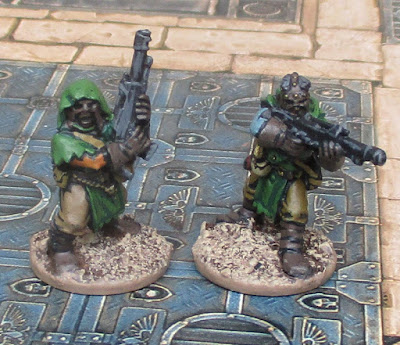 Babe and Gib are pics followers of the Imperial Creed. They have know each other since they were young lads and served as alter boys at the local basilica. Their devotion to their brothers and sisters of the gang and House Cawdor are second only to their devotion to the Emperor. Both can often be heard singing hymns in the middle of combat. 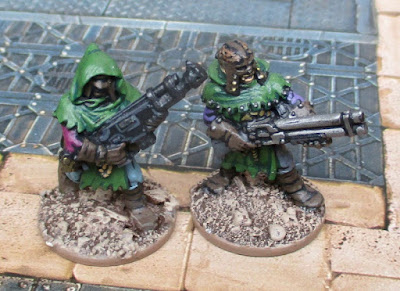 Bantu and Ernie are a vengeful pair. They have bonded together though shared loss and desire for revenge - both lost cherished loved ones to raids by mutant underhive gangers. They live for the hunt and will stop at nothing to purge the hive of mutants and avenge the loss of their loved ones. 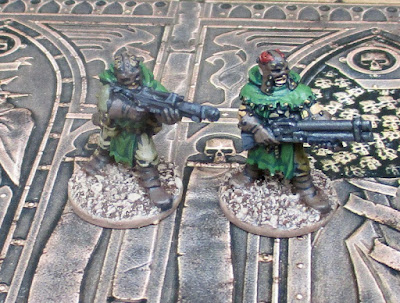 Simon and Jonesy just didn't want to work in the factorum or scrounge through waste heaps for recyclables and holy relics. They are devout, to be sure, but are far more pragmatic than the rest of the gang.

Janet, Leeroy, and Travers - the youngest and newest members of the gang. Janet is Rufus' kid sister and he is very protective of her. Leeroy's got something to prove and has a big chip on his shoulder. Travers is somewhat of an egalitarian and true follower of the Creed - all are equals under the Emperor.

All together that would be 1610 credits worth of gang… plus any additional equipment, grenades, etc - beyond the most basic equipment that the models are armed with - they all have bags and pushes that could be stuffed with extra gear and grenades! As gangs normally start off with 1000 credits, this will allow a fair bit of options to start and further options for future growth. 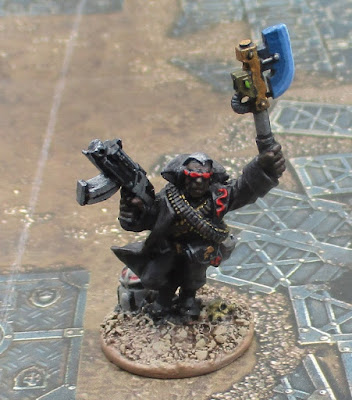 Artifex is the Leader of the gang. Artifex is a master dealer in information and prohibited substances (mainly Obscura and Spook - which he sells as red and blue pills). Artifex is kitted out with Flack Armour, Photogoggles, a Bolt Gun, a Power Axe and a Stub gun.
Skills: Mentor
225 credits 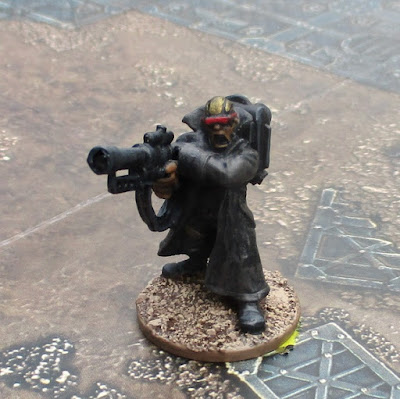 Risternina (Champion) is Artifex's right hand man.
He is kitted out with Flak Armour, Photogoggles, Lascannon with monosight, and a Stub Gun.
Skills: Marksman
330 credits 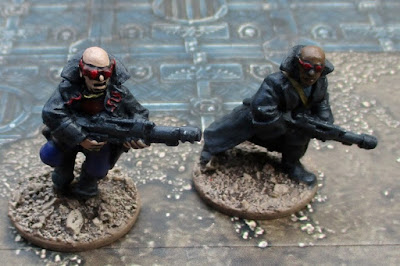 Mus and Rotis. These Gangers are equipped with Flak Armour, Photogoggles, Lasgun, Stub Gun and Stiletto Knife.
110 credits each 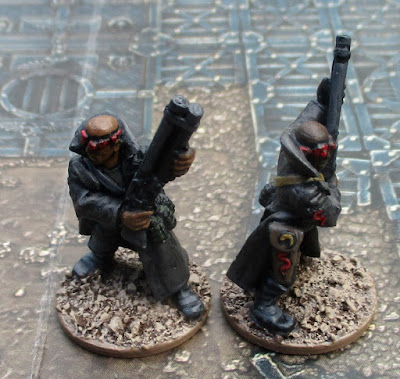 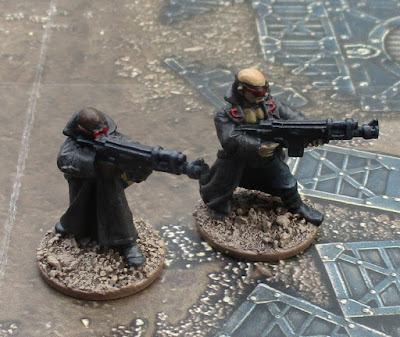 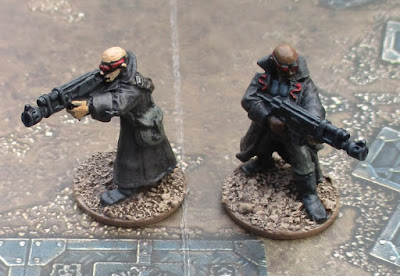 And that's the gang so far... In total I have 1665 credits worth of Gangers - more than I need for a starting gang in a campaign - or even a skirmish gang. A couple are armed with non-standard Delaque equipment (The LASCANNON! - and the Power Axe...). This will probably all get changed when, you know, I actually get to PLAY the game. I mean, the main armaments will stay the same, but there are so many wargear and pistol and grenade options - things that could go in a pocket or under their coat that don't have to be represented on the miniature...

I have three more to finish up - two are actually Hasslefree miniatures that I was going to convert to use as Delaque gangers, the third is an additional figure that was aiming an Autogun - which I have carved off and thought I'd replace with... well something... Maybe a Meltagun...?

A few sample Ratskins I painted up a while back.

The Sisters of Mercy Crusade 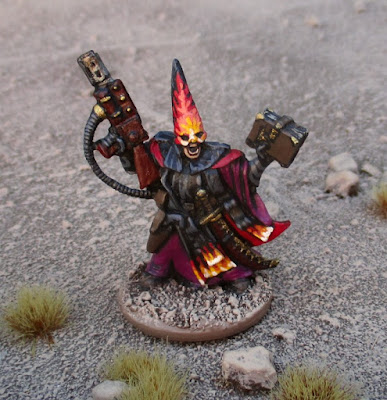 Jezebel the Redemptress is a fire and brimstone preacher that can whip up her flock into a frenzy with her apocalyptic tirades. Always ready to lead the faithful to purge mutants, psychers and xenos! 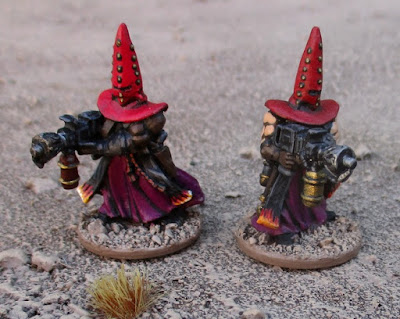 Deacons Rehoboam and  Jeroboam - Fanatically devoted to their Redemptress, there is nothing they are unwilling to purge with the cleansing fire of their flamers. 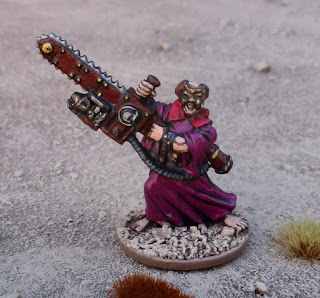 Brothers and Sisters of the Redemption crusade.