A while back you may remember I was trying to trade away some 15mm Great War stuff… Well the stuff I got in trade arrived this last week: 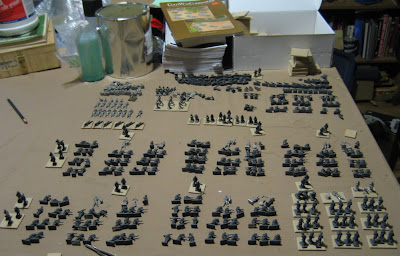 In addition to the stuff I had originally listed I also got rid of a few surplus 15mm WW2 things and some ACW stuff. I would have been happy for a battalions worth of the East Germans the fellow I was trading with promised. I there was enough for an under-strength regiment I would have been tickled pink… What I ended up with was almost enough stuff for a full strength DIVISION!!!? GADS!!

So a big, BIG thank you to Mr. Donald R Maddox Jr of Texas!

If that weren’t insane enough, he also sent even MORE 25mm Romans for John’s part of the trade!? 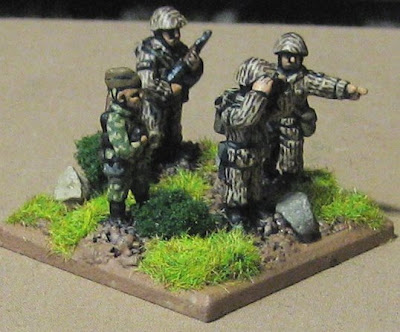 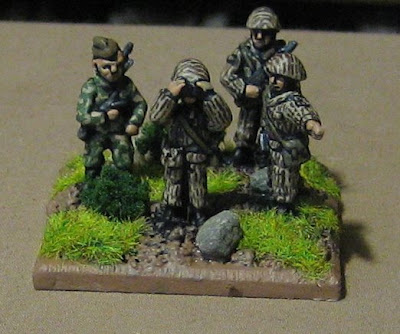 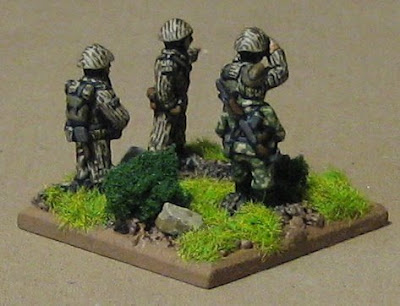 Three shots of My East German Divisional Commander (CO) stand – the fellow with the wedge cap looked more Russian to me so I did him in a Russian camo suit and am calling him a Soviet “advisor” (Note he’s standing slightly behind the commander with a pistol in his hand….)

Also this week I finished up two Command (HQ) Stands for my 20mm WW2 Russians. These are old Platoon 20 figures that were produced under license by Rafm. 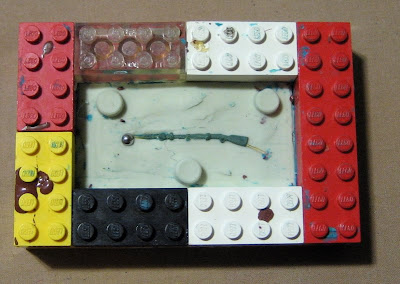 I also retrieved my half poured musket mould from John – as I’ve got some new rubber of my own I can pour the second half with – hopefully get on that this week. I’ve also did a little bit of work on the new masters I’ve been working on and started a couple new 20mm masters over the last week or so (they are destined to be more Canadians and FRENCH – to help stem the tide of the communist hordes!).

I also started painting some of John’s Descent figures. Watch for some pics next week.
Posted by tim at 11:20 AM 1 comment:

…Uh…. Well… I don’t have a name for this chap yet actually… but I’m getting the urge to run some Savage Worlds Pulp Adventure again… 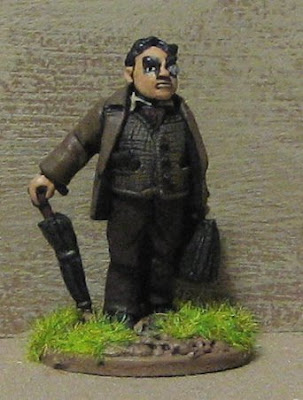 This fellow is from the Artizan Designs Trilling tales line. I think they call him Professor Walcot. I’m not sure I’ll use him as a professor – I’ve got plenty of those already. I’m thinking more of a writer type…

I started some armatures to make a few new 20mm masters – going to do a couple more Canadians and maybe some ‘80’s French or some generic Soviet equiped troops… I also ordered a new tin of RTV so I’ll be back to sculpting for a bit (and CASTING!) as well as painting some Descent figures for my pal John in Calgary.

Son of More Painting Updates IV: The Sequel to the Other Other Sequel

This should finish off the infantry and pioneer stands for my 20mm WW2 Late War SS Panzer-Grenadiers… of course I still have a few mortars and MGs to finish up and a load of AT guns and Tanks, etc!

Yet Another Painting Update

Just cleaning up some odds and sods and painting samples of this and that these days - not tackling any big units or anything as I just don't have the time - and half painted units are a dreary sight on my workbench... 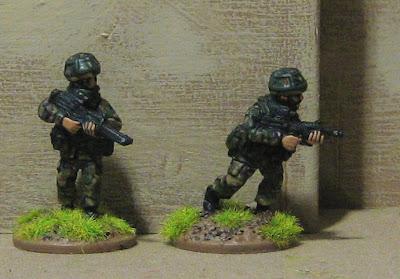 Some Modern British infantry from Assault Group. though these were probably made with Iraq/Afghaniztan in mind I decided to paint them in Temperate DPM. Seemed like the thing to do… 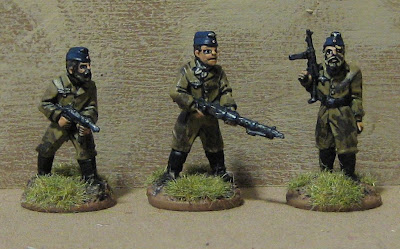 Some more Grey Wolves from Artizan Designs. With the help of the Aritzan Designs yahoo group I finally figured out that they were wearing boiler suits and thus painted then khaki – with lots of splotches and stains…
Posted by tim at 1:29 PM No comments:

I am still alive and painting… a little… 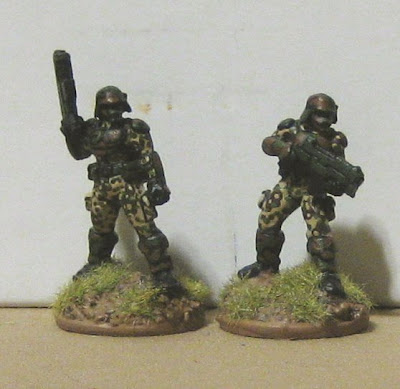 Some i-Kore Void figures. I pcked up a PILE of these from a $1 per pack bargain bin last winter to some day use as generic sci-fi skirmishy types. Just experimenting with some different camouflages at this point.

I started these guys a month or so ago when I had watched the Aliens special edition DVD. Originally they had had a camoflage with a sort of grey background – like the Colonial Marines in the movie. It just wasn’t working for me so I made one with a tan background that looks more akin to the SS pea-dot camo… I kept the woodland camo armour for some reason though… Doing the whole figure in the pea-dot camo might be a bit much… I dunno… 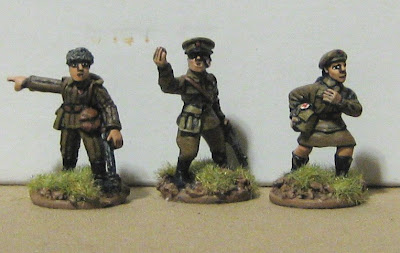 This is the last of the Russian infantry. Now I just have to finish off the KV-2 and the GAZ jeep. 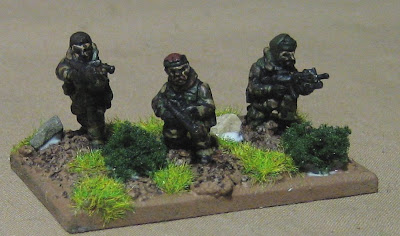 Some FAA 20mm SAS. (Still with fresh white carpenter's glue under the rocks and bushes!)
Even with this drastic reduction in productivity I still get more done than half the clowns that call themselves miniature gamers in this town!

I finished up another pile of Russians last night. I only have three more to go plus the GAZ and crew and the KV-2…. Then I guess I’ll need to get MORE!!! BWA-HA-HA-HA!!!!

I think these are all Bolt Action Miniatures. Glue still fresh under the stone there…

Going to have to get some AT guns soon or some anti-tank specialists… maybe some German tanks… we shall see…
Posted by tim at 6:06 AM No comments:

Labels: Painting Update, Taking Stock
Newer Posts Older Posts Home
Subscribe to: Posts (Atom)
"There are some who call me.... Tim"
Welcome to Tim's Miniature Wargaming Blog. Here you will find reports (and pictures!) of games I have played as well as news (and pictures!) about my current modelling and painting projects.