Another force I had a bunch of back in the day... a small opposing force for my Eldar at the time. The originals are long-gone, but I've picked up a few replacements over the years that I hope to get around to painting up and using as a Kill Team or some baddies in a game of Wrath & Glory. These are the only two that are painted at the moment. A War Boss and a Cybork.

I have a dozen or so old metal Ork Boyz to paint up. Enough for a Kill Team or a decent-sized encounter in Wrath & Glory. One of these days I'll get to them and post pictures here.

My son has an entire Ork Army of his own, so if ever I needed more for a tabletop scenario or role-playing game, I could just borrow some of his. I have no strong desire to add to these...

I have a very small collection of Tau. Originally picked up to be Nemesis in a 40K RPG, they finally saw use as a Kill Team in Shadow War: Armageddon. Since then they have been reorganized as a Kill Team in Warhammer 40,000: Kill Team. The Tau seem pretty weak in Kill Team. I think it would be far more likely that they'll see action as a Xenos threat (or possible ally?) in a game of Wrath & Glory. 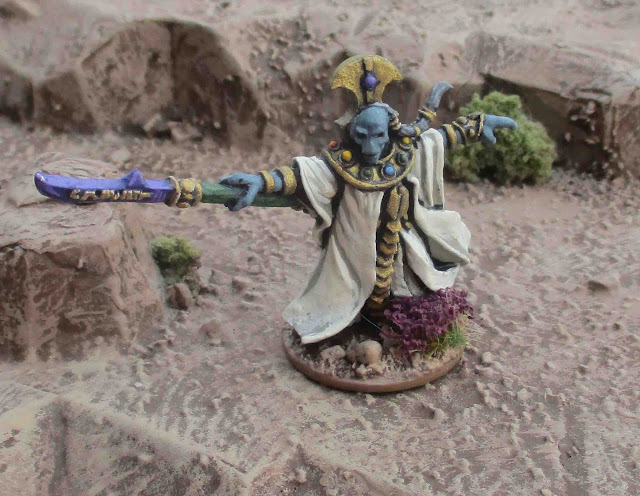 The Tau Etherial. Etherial are an option as a Commander for a Tau Kill Team. To be honest, I haven't even looked up the rules for them - they were so Underwhelming in Shadow War: Armageddon. I see him as the spiritual leader of the force and will usually just stay back in the Devilfish Grav-APC and monitor the progress of his Pathfinders. Perhaps he might see action in a Narrative Scenario that involves protecting or saving their leader... 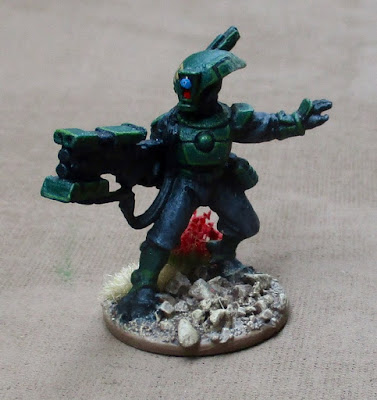 Els'im is a Farsight sympathizer. The legendary commander has been labelled traitor by the Etherials, but there are still those within the Fire Caste who venerate his legacy. Els'im is one of them. 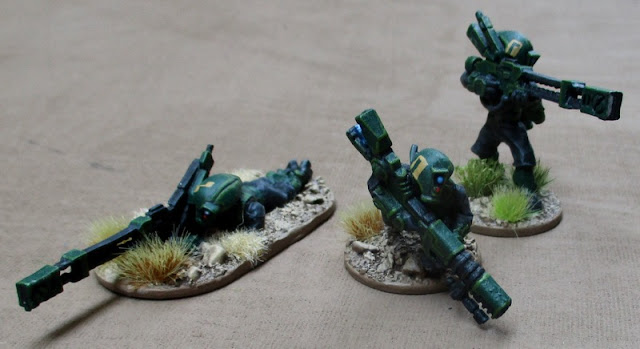 Sul'an leads this fire team and is recognized as the best shot among then group. She is a perceptive, sharp-eyed warrior, that is constantly on the lookout for incoming threats and is almost impossible to catch off guard.

Nomura is this fire teams leader. She is the Kill Teams scout specialist. She is utterly Pragmatic. She recognizes that sometimes difficult choices and unpalatable actions must be made in service of the Greater Good. 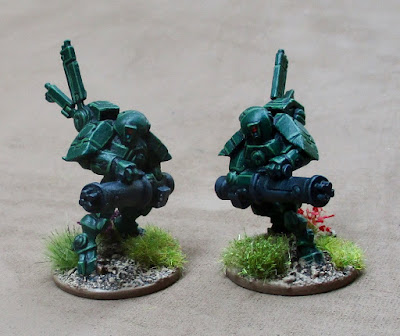 Though Shas'vre U'so technically outranks Shas'ui Els'im, U'so defers to Els'im and recognizes she is the leader of this team of Pathfinder to which U'so is attached. A veteran of scores of conflicts, U'so is  unflappable. Even under the most intense pressure, U'so maintains a cool head and a steady aim.

The only thing I have left to do is a TY7 Devilfish Grav-APC. It was actually the first Tau model I owned. I picked it up super cheap off eBay and planned to use it as a generic sci-fi grav-vehicle. Now that I actually have some pathfinders, I do intend to assemble it and paint it up to be their transport.

The only think I could think of adding to this force is a few drones. But I have no strong desire to do so right away...

Like the other two Xenos above, I have a very small collection of Tyranids - mostly Genestealers, so far, to use as a Kill Team in.. well... Kill Team... 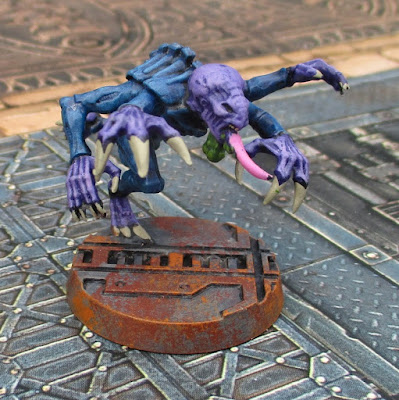 The is the leader specialist: Nemesis Alpha - "spitter". You can only really tell by the greenish, scrotum-like sack under his jaw - the acid juice storage sack for his Acid Maw! 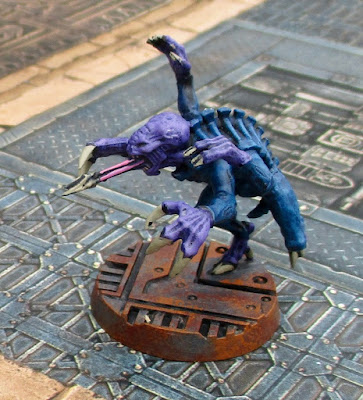 Nemesis Beta - "The Shadow" - is the Scout Specialist. It's got Flesh Hooks (the pointy, stubby things coming out of his mouth. 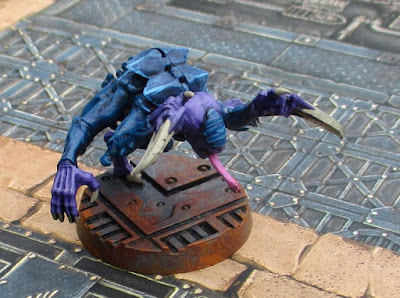 Nemesis Crucius - "The Terror" - has an Extended Darapace and Scything Talons. It is the Veteran Specialist Nemesis Decima - "Mindeater" is the combat specialist. I gave him this odd head with the tentacle face to differentiate him from the other generic genestealer with Scything Talons. Also it's name is "Mindeater" and the head kinda of reminded me of a Mind Flayer...?

The rest of the Kill Team (from the box, that I just finished painting..) these are all just generic Genestealers. There are names for all of them on their cards... but I can't be bothered to type them all out. One of them has Scything Talons, which I think are of limited use... You re-roll 1s to hit when using them... but honestly I think I'd rather use the Rending Claws which, if you roll a 6+ to wound, is resolved at -4AP instead of the -1... Oh, and Scything Talons are 0AP... so... They're already WS3+ and have three attacks... so...

I also painted all of Finnegan's Space Hulk Genestealers.

I did pick up a box of Termagaunts - because they're so cheap - just to add a little option to the kill team and some shootiness. But then realized they are utterly useless without a Tyranid Warrior to guide them... so... at some point I guess I'll have to pick up a Tyranid Warrior if I want to make use of the Termagaunts. I guess I could paint them up and use them in Wrath& Glory and just say "the synapse creature is nearby... you really don't want to meet them..."