This is one of the items I picked up from Imperial Hobbies in Vancouver when I was there a few weeks ago - a Bolt Action Miniatures SdKfz 234/2 Puma. 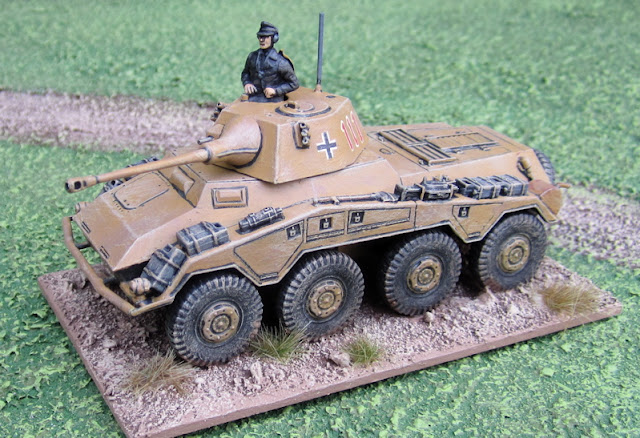 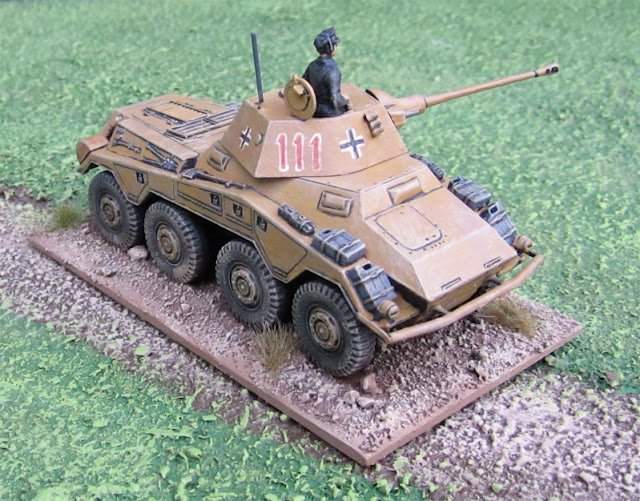 Not a bad kit. 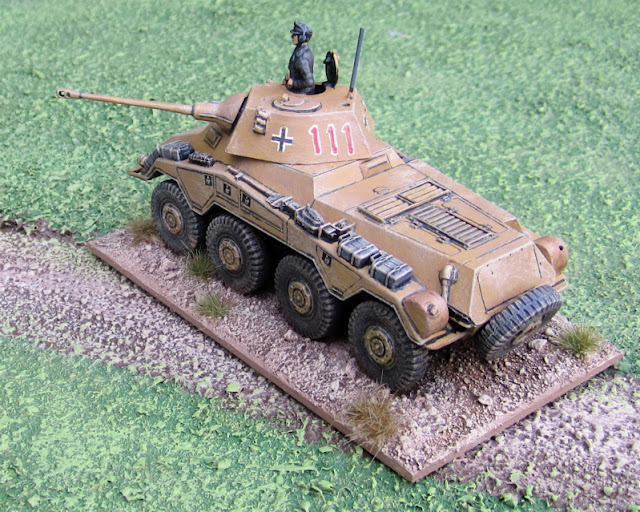 I don’t know… somehow I thought when they started coming out with plastic kits of various things they’d be cheaper than resin kits. These don’t really seem all that cheaper. Ah well. 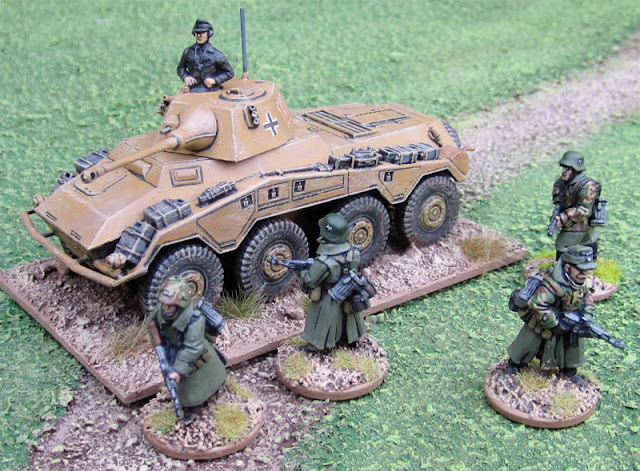 I tried to go with a generic dukelgelb so I could possibly pass this off as anywhere from North Africa, to the East Front to Normandy… Though the commander might be a bit warm in that black uniform out in the desert…

I've been sick this last week and not really been doing much of anything at all - let along painting... I did a little bit of assembling  (40K Imperial Guard - if you can believe that)... and got in a game of Carcassonne with the kids... and during a few other moments when I wasn't just lying in bed moaning and gurggling I got up and took a few pictures to update the 28mm Vietnam Gallery - click and check it out. I still have the PAVN/NVA and NLF/VC to add...

Kind of makes me want to bust them out and PLAY with them...

I did read Flying Lead a month or so back and have been looking for an excuse to try them out...?

Or perhaps it's time to revisit Force on Force and Ambush Valley...

...and now back to our regularly scheduled programming...

When I returned from Vancouver the middle of last week – not only did I have a few treasures I brought home with me – but I also discovered, to my delight, that the order I had placed with Brigade Games in February had finally arrived! It was a bit of a wait  - they were waiting for a re-stock from Company B who, in turn were waiting for a restock of some parts… anyway… it finally arrived...

I ordered a pair of Jeeps with Rat Patrol crew (mounted and dismpounted), and some Japanese on bicycles, some WW2 British, and another pair of jeeps for these WW2 USMC crews I’d picked up a few years back from North Star Figures when they were blowing out a bunch of their Brigade Games stock… 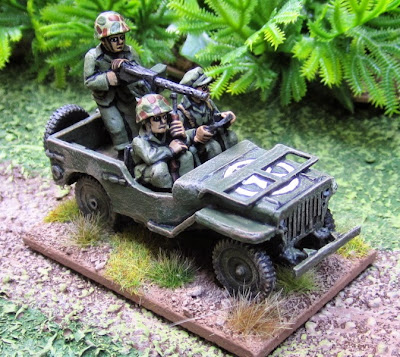 USMC Jeep from Brigade Games/Company B. 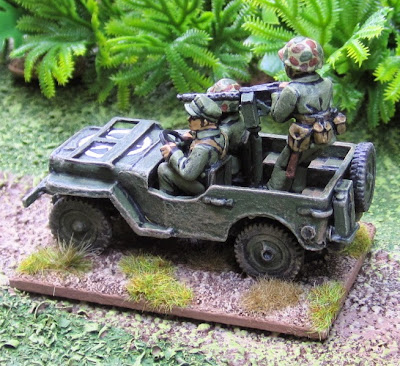 I’m not really sure what they’ll be used as…? Jeep recce team? Company Commander? 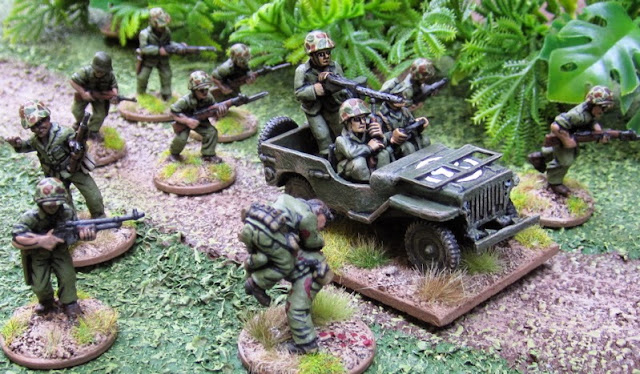 Here it is with a few of my other WW2 US Marines.

As I mentioned I have another team like this and then the Rat Patrol…I think I’d like to pick up a couple of their SAS/LRDG jeeps at some point. I was thinking about putting together an SAS Jeep patrol/raiding squadron and, just to have some uniqueness to the different teams, I thought I might order jeeps and crews from different manufacturers…? I know Company B, Warlord Games, and Dixon Miniatures make them (Warlord games has two variants, Company B comes with different heads…) are there any others out there? How wildly different could their Jeeps be…?

Ummmmmm…? I’m not really sure… so much stuff polluting my workbench… it’s really time for a clean-up….
Posted by tim at 10:23 AM 4 comments:

That moment when you start to feel you may have succeeded as a Geek Dad: 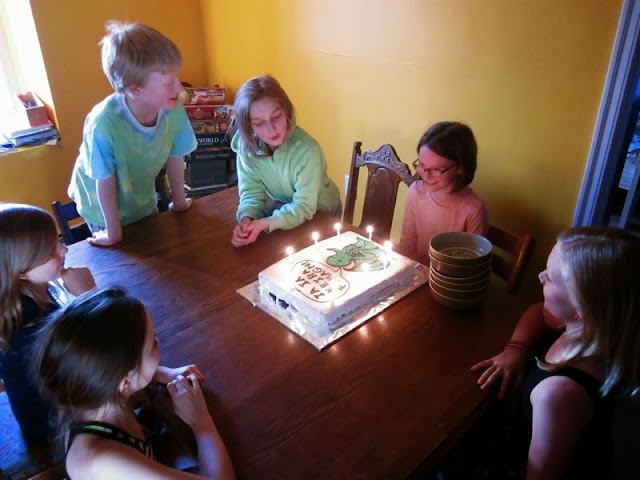 When your 9-year-old daughter asks for Cthulhu on her birthday cake...

I’ve been in Vancouver.

While I was in Vancouver I made a trip out to Richmond to visit Imperial Hobbies and picked up a few things there – including this French Reneault R-35. I also picked up a box of Gurkhas ( to add to my Chindit force, a German Puma armoured car, a Battle Honors Russian T-70 and a pack of Coppelstone Back of Beyond Russian Partisans (the last two being items I found in the bargain bin). The week before I went I’d been checking their online catalogue and they’d had an Italian M13/40 tank listed and a boxed set of Bersagliaeri… unfortunately when I arrived the tank had been sold and so I talked myself out of picking up the Bersagliari. There were a few other things I’d gone there looking for that they were out of stock on… and a few other things I saw there that I now wish I’d picked up… but… whatever… I got what I got and I have no shortage of things to paint (and potentially play with)!

I also bought some socks while I was there and a fancy new pair of shoes. But not at Imperial Hobbies. 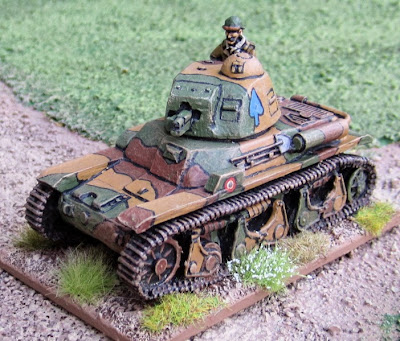 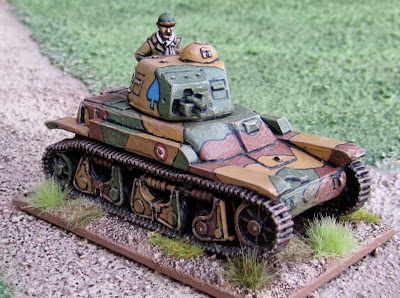 I didn’t just pick up the R-35 because it happened to be available. I’d been planning on getting an R-35 anyway as the majority of the Bataillion de Chars de Combat (armoured battalions that provided support to Infantry Divisions) seem to have been equipped with them. 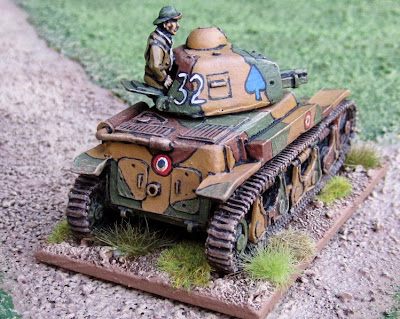 This adds a whopping 96-144 points (most likely 120 for a “Regular” tank crew) to my Early War French for Bolt Action, which, even if I took the forward Artillery observer and everything, leaves me about 120 points shy of the “suggested” 1000 points for a force…

Not that I care all that much about having the suggested 100 points – I just wonder what it is the makers of the game imagine should be in a 1000 point Early War French Force? What would other playes with French forces add to be able to take it to a 1000 point tournament…? I suppose there is the pack with the Anti-Tank Rifle and Sniper Teams that could be added… I could also add another 75 or an antitank gun team…? It already seems like this solitary platoon has a ridiculous amount of support weapons!? I suppose the “historical” thing to do would be to field a company of understrength, inexperienced Infantry without so much support…

The basement is a mess. I’ve got stuff all over the game table and stuff for painting spread over two other tables in the basement… I have no idea what I might finish up next… I really need to clean up down there and come up with some sort of PLAN and maybe actually PLAY some games with all these minis I’ve been painting!?
Posted by tim at 6:52 PM 12 comments:

Labels: Bolt Action, Painting Update, WW2, WW2 French
Newer Posts Older Posts Home
Subscribe to: Posts (Atom)
"There are some who call me.... Tim"
Welcome to Tim's Miniature Wargaming Blog. It's not just about Miniature Wargames anymore, really. Hasn't been for a long time. I kind of just keep the name out of habit.
Here you will find reports (and pictures!) of games (miniature, or otherwise) I have played as well as news (and pictures!) about my current modelling and painting projects.... and, occasionally, other stuff...