I finished up a few more things for my Cold War Commander forces over the weekend….

A third company of infantry (the ones on the right). I just have to finish painting their last two Grizzlies and they will then also be fully mechanized. After that… I dunno… Leopards…? Another company of infantry and their M113s? a Company of Paras…? WE shall see.

Three stands of observers (artillery or air…) for my soviets (VDV or Motor Rifles…). These are Firefight 20 figures that I got in The Big Trade earlier in the summer. I did them in KLMK camo so they would fit with the VDV, which are all so attired. They could also easily fit in with a Motor Rifle Regiment as I’m sure any scouts or observer types would be cammed up as best as they can. It also makes then stand out from the rest of the forces HQs – which are all in khaki.

Here is the state of my Soviet Motor Rifle Battalion. The force is currently organized thusly:

FAO
3x off table artillery of some sort….

I have five more Forces of Valor T-72s to repaint – that will make a full battalion of those! I Just need three more BMPs.... and actually I need something to represent the HQs in my armoured companies...

Unfortunately the guy I got the ones I’ve got from doesn’t seem to have anymore. Britannia apparently has some in the works. But if the scale is wildly off they might look a little funny with these. At least the three I’d need would all be in their own formation…

I do have three BTR-60s. But it seems to me that a battalion would all have the same equipment… although once a regiment started taking losses equipment might be swapped around to keep one battalion fully mechanized, while the remains of others became, essentially, light infantry…?

I had really planned to use the BTRs with my African forces, and maybe a small force of Soviet Naval Infantry. Maybe some day if I picked up a pile more (six, to be precise), I could form a second battalion of the Motor Rifle Regiment….
Posted by tim at 11:29 AM No comments:

Well I’ve been steadily chugging away at a few things for Cold War Commander. I’ve cast up a pile of Canucks - enough to finish off the mechanized battalion, and assembled a few Grizzlies. Here’s one of them: 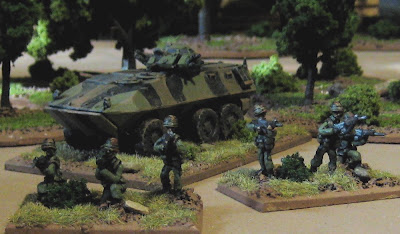 The kit is from ACE models out of the Ukraine (if you can believe that!?). Like I said I have two more assembled, awaiting paint. I also have another yet to assemble and two more in the mail – so I will have a total of two companies worth of them in the end.

Hopefully I’ll finish the other two up in the next week or so, along with a company of infantry to ride in them… then I’ll have to have a BATTLE!!

I should get on with the rest of the M113s next…. or maybe some Leopards… Or painting some more T-72s… So much to do , so little time… 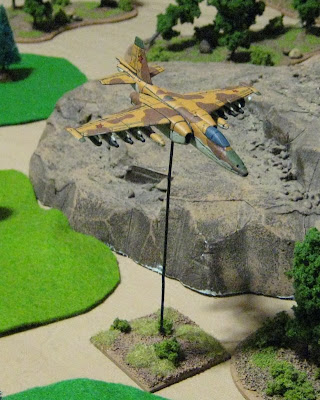 I also finished up a SU-25 Frogfoot to give my Russians some close air support! This kit was a 1/144 Academy kit.

I think I'm going to try and do all of my CWC aircraft in 1/144 - there's a lot of cool stuff available, it's relatively inexpensive, and doesn't take up so much of the table as some of the aircraft and helicopters can in 1/72...

Of course tracking down soviet helicopters in 1/144 is proving tricky. No Mi-8s that I can find so far. Dragon did make a Hind but it's out of production. I found on on ebay for $5.99US but the seller wouldn't give me a straight answer on shipping... she said she "tries to keep it in the states as ]she's] had trouble shipping to Canada"...? So you're not going to ship it to me? It said in the post that she ships internationally....? I don't think I've had any trouble with international shipments... (well, except FAA, but that's a whole different kettle of fish...) As master Yoda says; "Do or do not, there is no try..."
Posted by tim at 7:56 AM No comments:

I finished up a couple of M113s this week to mechanize my first company of Cold War Canadians. 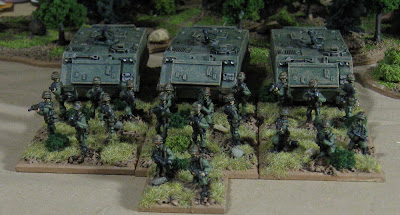 The M113s are Italeri plastic model kits. I have two more in boxes to be assembled and painted, plus I’ve ordered an Easy Model pre-assembled and painted 1:72 M113 (which will be repaineted to match the others – hopefully it will be the same SCALE as the others!), to kit out a second company.

I had fretted about how to paint them for some time. I’ve seen all manner of camoflage patters on Canadian M113s – some three colour brown-black-green, some three colour light green-dark gree-black, some two colour green and black, and some just green. I went with just green and didn’t paint on any insignia so the could double as either American or Israeli. Honestly in most pictures they’re generally so covered in grim and mud ans dust you can’t even tell what colour they were originally – so that’s just what I did – green with heavy weathering!

I also have 4 (+2 more ordered for a total of 6) Grizzly AVGPs, to kit out two more companies. These will take a little more work to assemble so they will be coming later….

Ideally I’d like to have a whole battalion with M113s but I just can’t afford that right now, so I have to work with what I’ve got – so we will have a mixed battalion.
Posted by tim at 7:07 PM 2 comments:

Some More of John’s Descent Figures

John was in town yesterday and picked up a bach-o-figs I’ve painted up for him. Thought I’d borrow Amanda’s camera and take a quick pic of the Descent figures.

Don’t ask me their names… I don’t remember. Pain in the ass to paint, but look pretty okay when they’re done.
Posted by tim at 1:43 PM No comments:

Labels: Painting Update
Newer Posts Older Posts Home
Subscribe to: Posts (Atom)
"There are some who call me.... Tim"
Welcome to Tim's Miniature Wargaming Blog. It's not just about Miniature Wargames anymore, really. Hasn't been for a long time. I kind of just keep the name out of habit.
Here you will find reports (and pictures!) of games (miniature, or otherwise) I have played as well as news (and pictures!) about my current modelling and painting projects.... and, occasionally, other stuff...