I've been working on the Assuryani again - the Craftworld Aeldari. Partly because I've had new ideas about where to take the narrative in the Xoxigar System... But, the hint of a new Codex and New CORSAIR models might have had something to do with it as well.

I haven't really painted any NEW minis - though there are a few on the workbench - to finish up existing units! This is mostly bringing the rest of the currently painted Aeldari up to the current basing standards - as with the Biel-Tymm Combat Patrol Force I did last September. 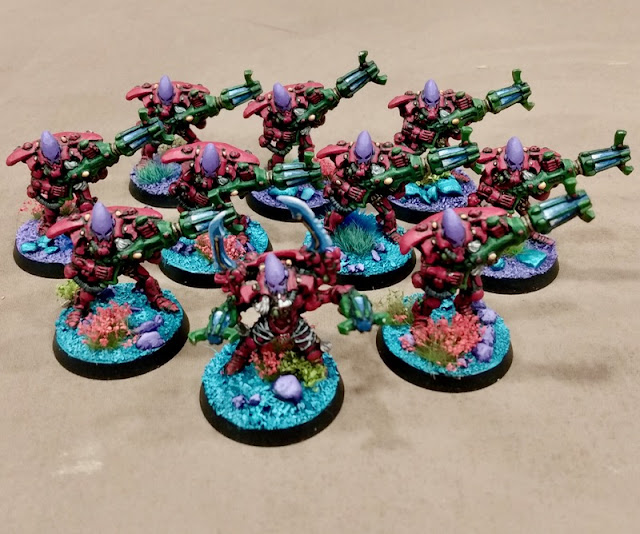 I'm not entirely sure WHY I started with them... but that's where I started.

I decided to do the unit in two base colours that were reversed - five that had blue bases with purple rocks and five that had purple bases with blue rocks. I wanted them to have a similar look that echoed each other and wouldn't look weird when operating together... but could also be fielded as two separate units of five - and have distinct bases to differentiate them. 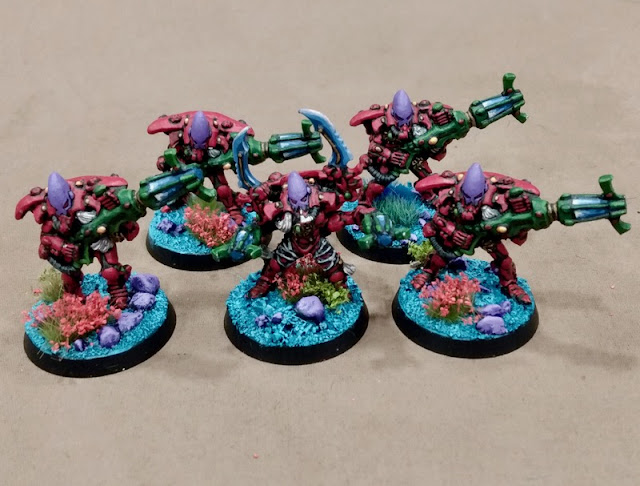 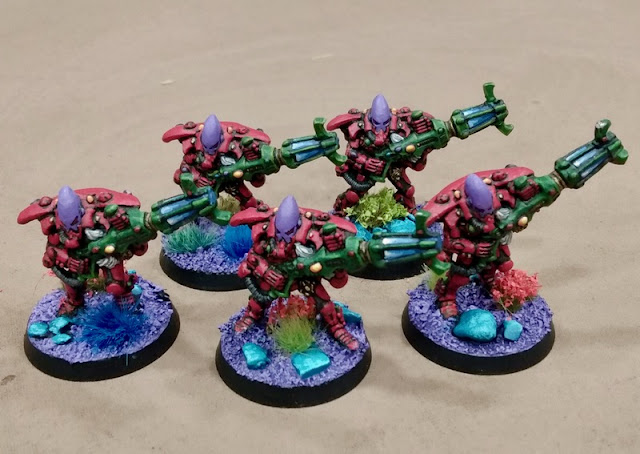 I actually have TEN MORE Warp Spiders I could paint up some day... but I think I'll finish up some of the other aspect warriors first! 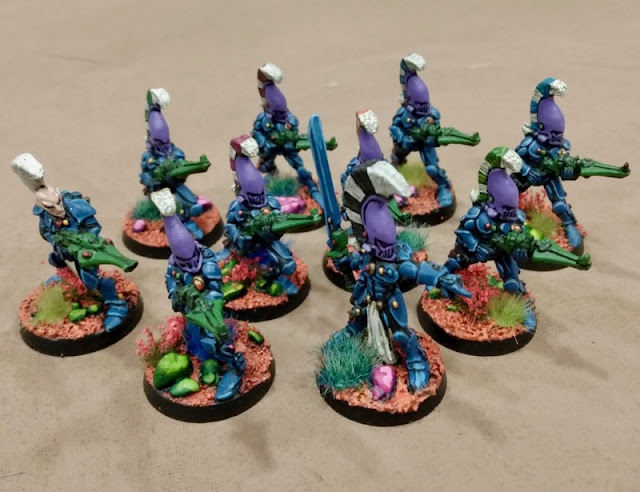 Next I did a squad of Dire avengers from the Shrine of .

These all have orange bases, but I did five with green stones and five with pink stones... in case I ever wanted to field THESE are two separate units of five... I'm not sure why I would... 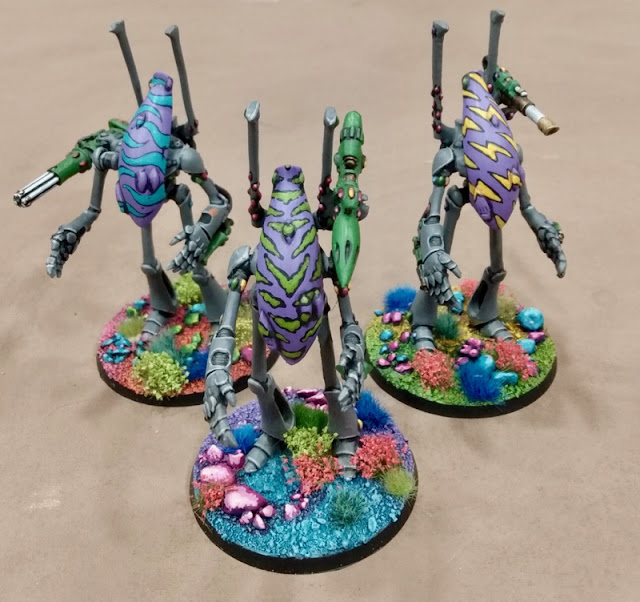 Finally I got to work on finishing up the Wraithlords. 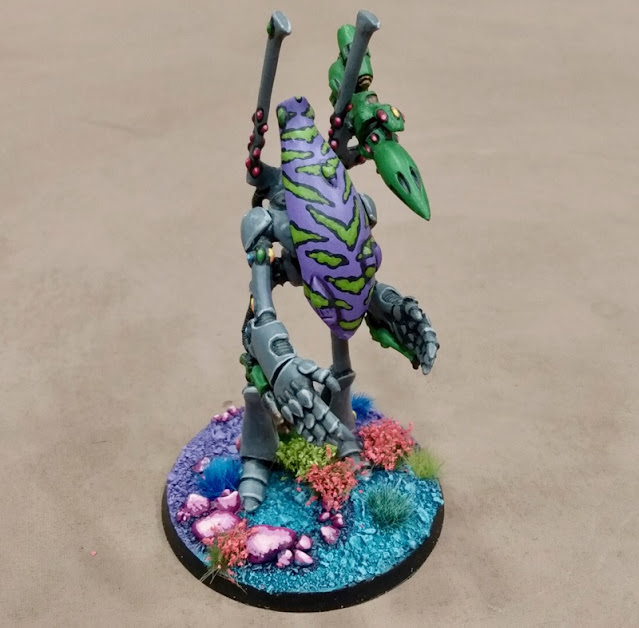 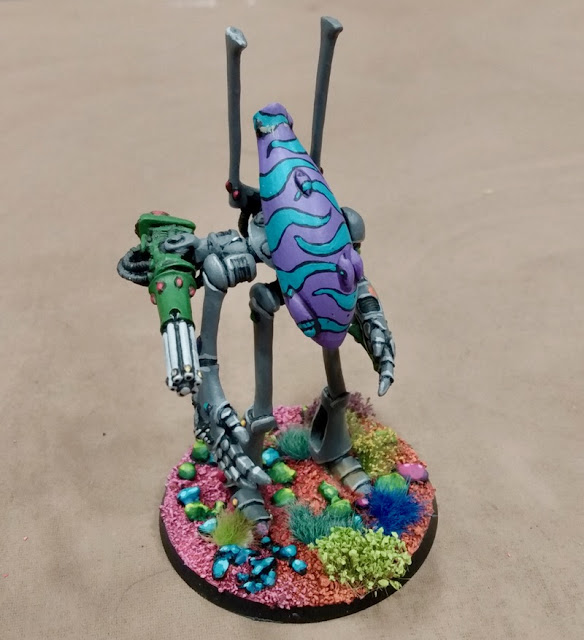 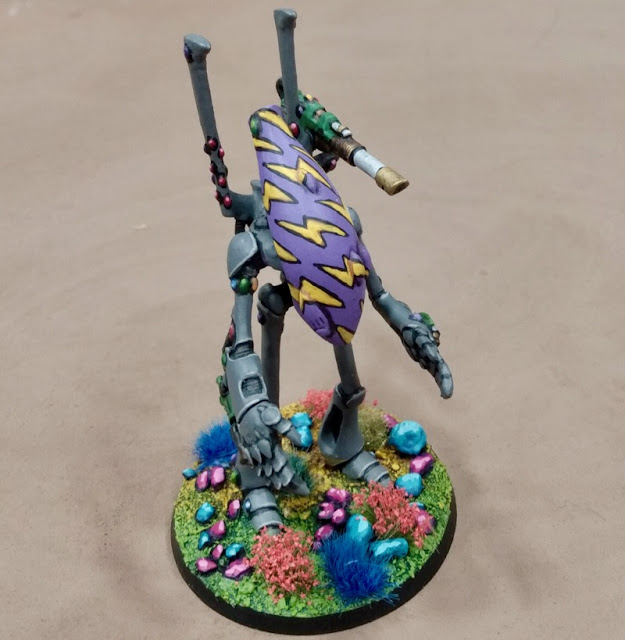 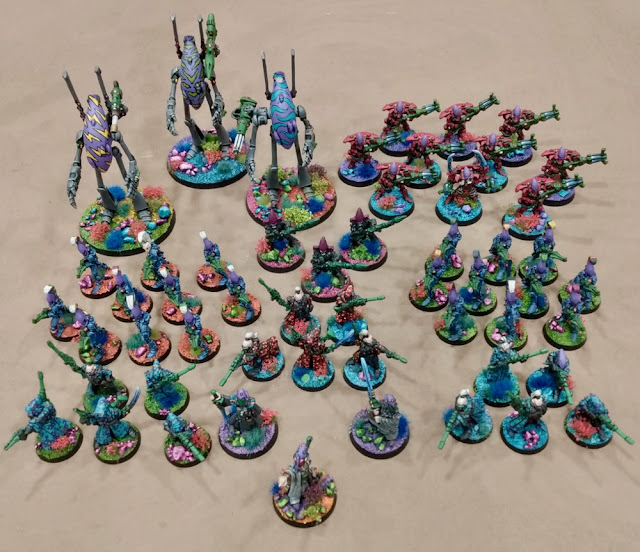 The whole rebased force - so far!

(not including the Super Heavy Detachment of Tempest/Scorpion Tanks)

I have four Howling Banshees to finish up to make a unit of ten of those.

I also have a weapons platform and two gunners to finish up to complete a unit of ten Guardians.

I have a unit of Wraith Guard that just need to be rebased - but I need to get some 40mm bases for them!

After that... things need a bit more painting!

I have based and prepped a few Phoenix Lords: Jain Zar, Fuegan, Baharroth, and Karandras (these are the only ones I have). I have also based a squad of ten Striking Scorpions and the additional ten Warp Spiders (though, as mentioned, they are VERY LOW priority).

Still to be rebased, AND painted, are fifteen more Scouts, two squads of Guardians, two Dire Warrior Exarchs (if I wanted to have exarchs in each of the potential four units of five) three or four more Warlocks and some Swooping Hawks (nine) and Fire Dragons (eight) - need a few more of each to make full units.

I feel like I want to chip away at these and finish them all up this year and be DONE with them.

(Oh, I guess there are also the old Armourcast Eldar TITANS I picked up a few years ago and still haven't finished painting... but that's for some other time... )

(and SO MANY other things!?)

Labels: 40K, 40K9th, Aeldari, Assuryani, Eldar, Xoxigar
Newer Posts Older Posts Home
Subscribe to: Posts (Atom)
"There are some who call me.... Tim"
Welcome to Tim's Miniature Wargaming Blog. It's not just about Miniature Wargames anymore, really. Hasn't been for a long time. I kind of just keep the name out of habit.
Here you will find reports (and pictures!) of games (miniature, or otherwise) I have played as well as news (and pictures!) about my current modelling and painting projects.... and, occasionally, other stuff...