I've decided to put together a force of assorted Chaos stuff - with a slight bent towards Slaanesh! I was mostly thinking a Daemon army, but there will be a few Chaos Space Marine elements - and a couple of Knights - mostly because I happen to have them... 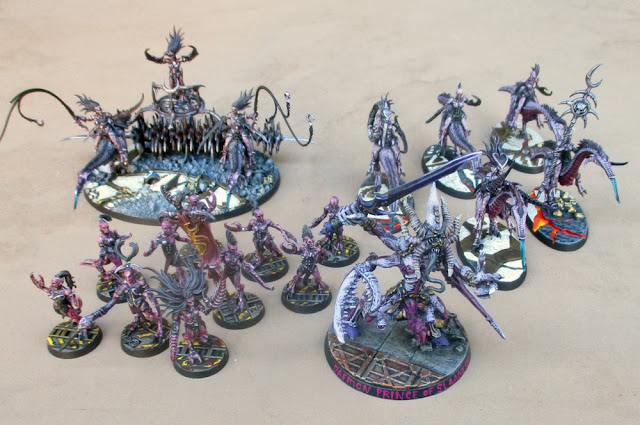 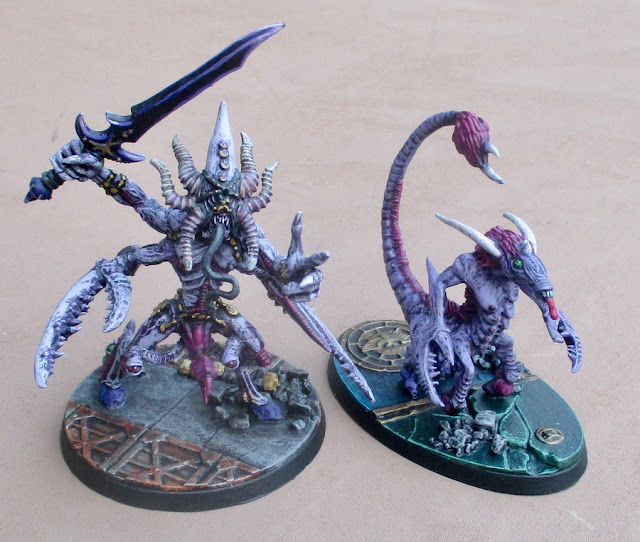 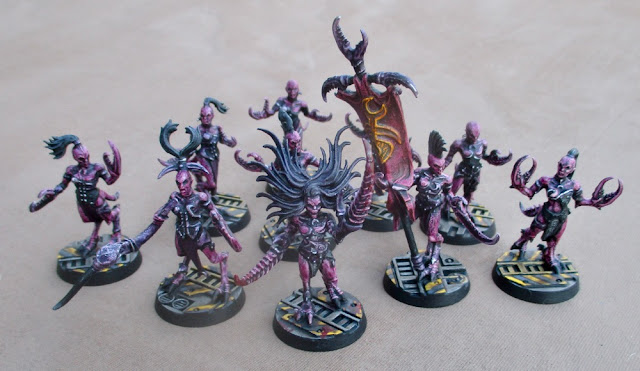 The FIRST unit of Daemonettes. 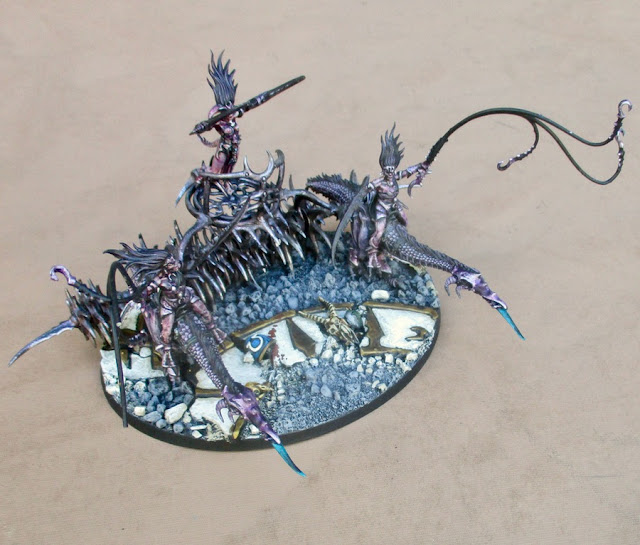 Helflayer!
(It COULD be a Fast Attack unit or an HQ unit - if I wanted to call that a Herald of Slaanesh on the platform!) 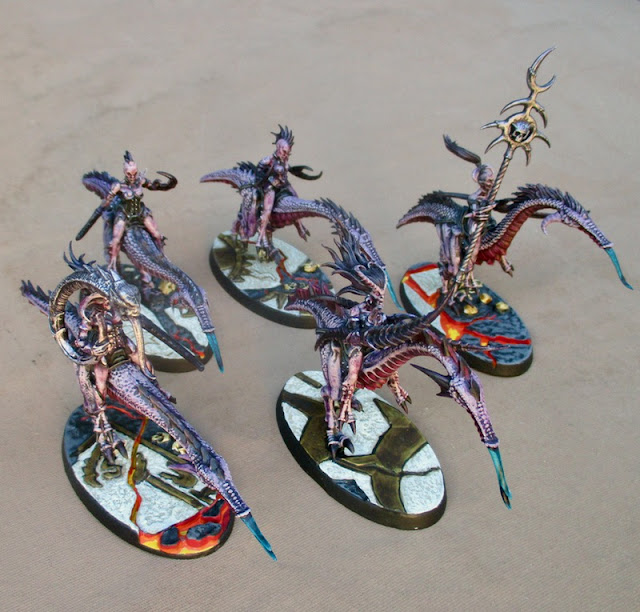 I have two (or three?) more squads of Daemonettes to assemble and paint at some point. In the LONG term, I think it would be fun to have SWARMS of these - like, three units of thirty of them!
I also have Seekers (five more of them!), and more Fiends (three of the new plastic ones), and an Infernal Enrapturess, and an Exalted Seeker Chariot to assemble and/or finish painting AND Syll' Esske - ANOTHER Daemon Prince... At SOME point I might also add one of the new Keeper of Secrets.  And maybe a few other characters (Masque and Herald)...? 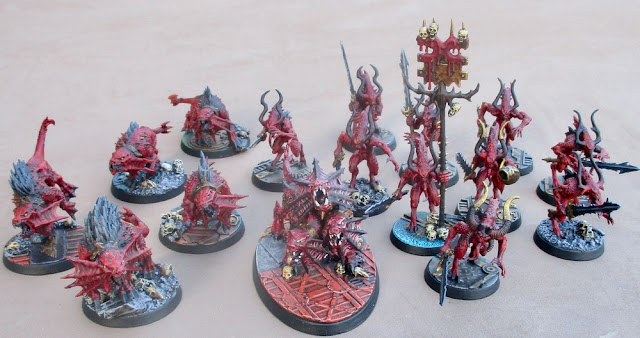 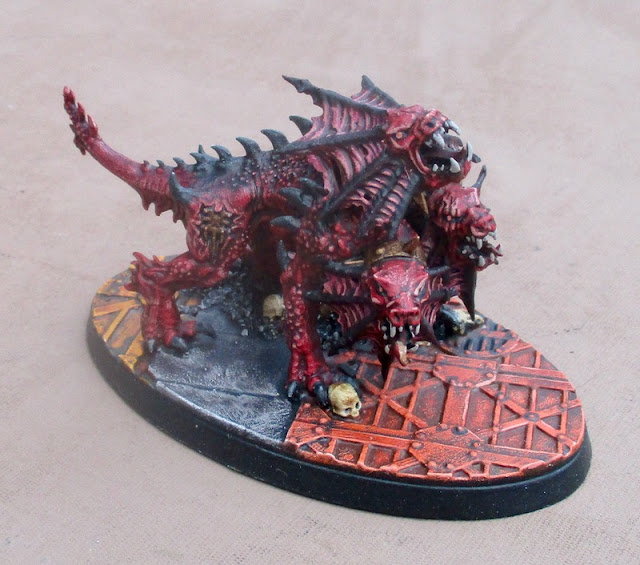 Karanak, the Hound of Vengeance! Headquarters for a small detachment of Khorne Daemons. 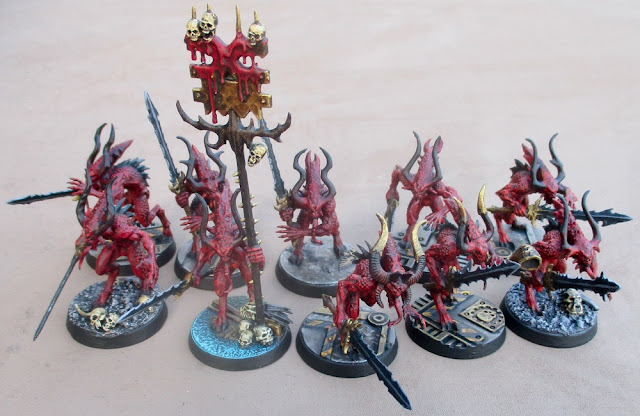 Bloodletters of Khorne. Troops. At some point I might pick up two more such units - just so they can be fielded as a full "Battalion" detachment. 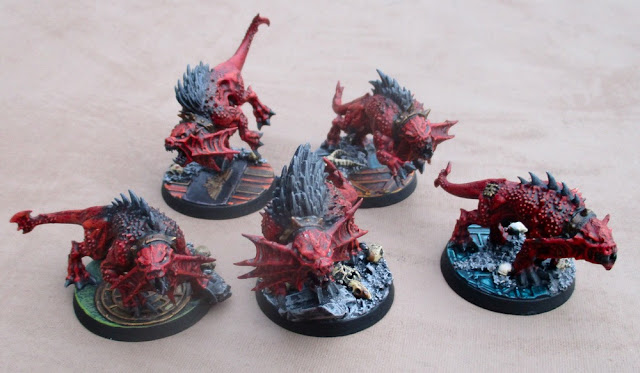 I also have a unit of Bloodcrushers to finish painting...
Nurgle 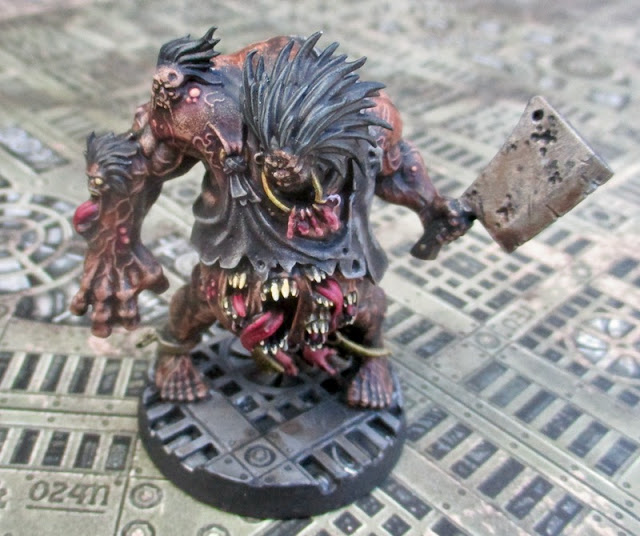 Well, there's this guy... from Kill Team: Rogue Trader. He has some friends I should finish and include at some point...

The Chaos Space Marines will largely be Emperor's Children - servants of Slaanesh - but I will also have a small detachment of Death Guard. 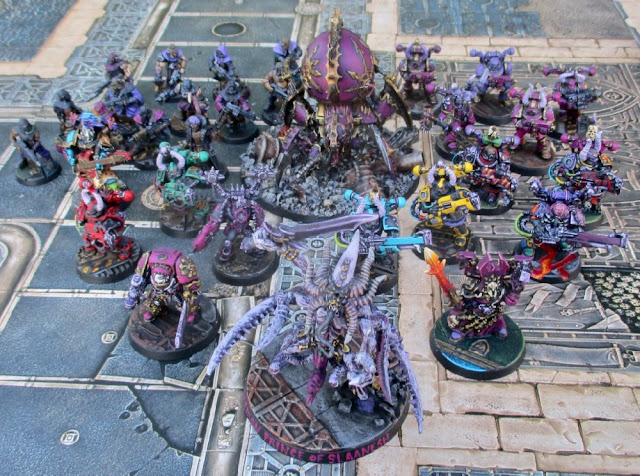 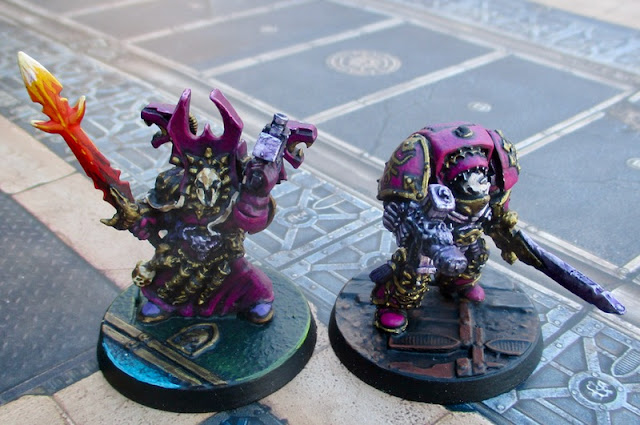 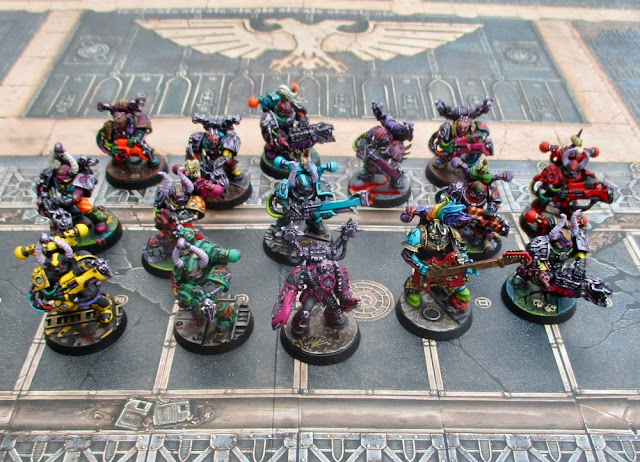 NOISE MARINES!
They count as Troops in Emperor's Children forces. Probably see these on the table more often than the regular Chaos Space marines above. They can be fielded in squads of 5 or 10 (or more, actually... but I'll probably do them in 5s or 10s). I have enough for 30 - eventually - but currently only have half painted. Though they may at times be fielded in squads of 10, I've sort of trying to be working on them in "bands" of 5... 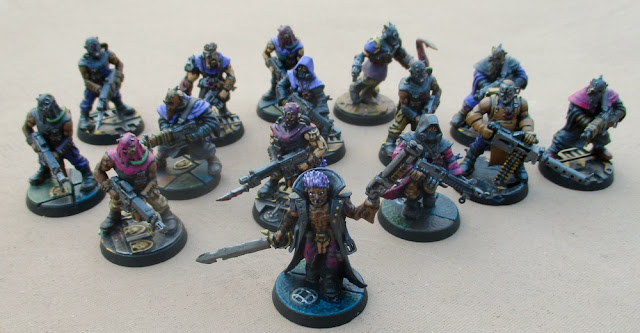 Only a few cultists, so far... I do have 15 more of these to finish painting... plus a bunch of others from Blackstone Fortress that could be fielded as Cultists... 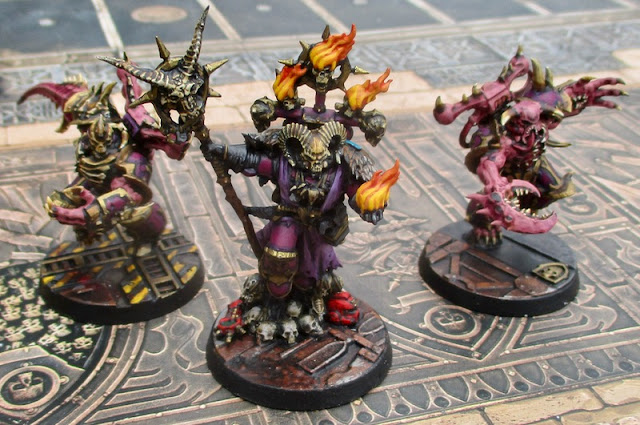 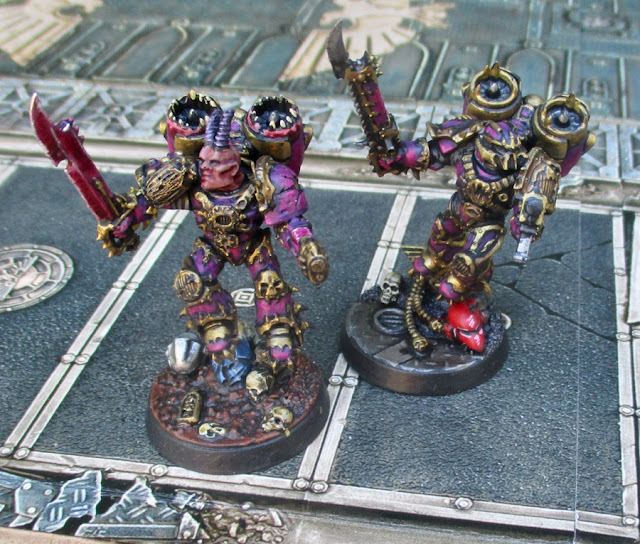 I have a squad of Raptors to do... so far I have only completed two... three to go! 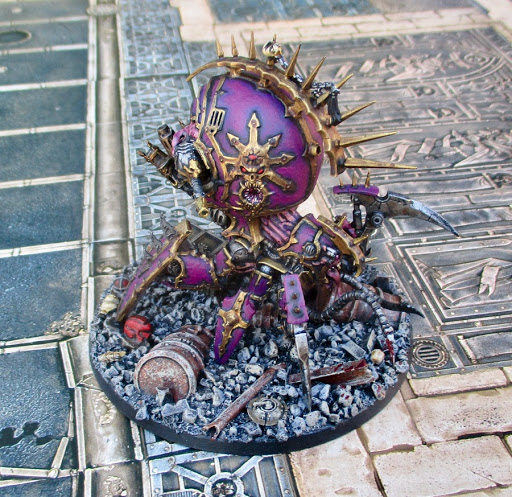 Venomcrawler - for some Heavy Support

I also have Terminators, more regular Chaos Space Marines, two Obliterators, and a few more Noise Marines to finish up for this force! 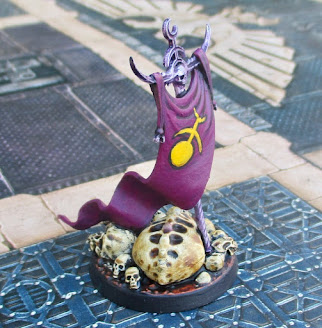 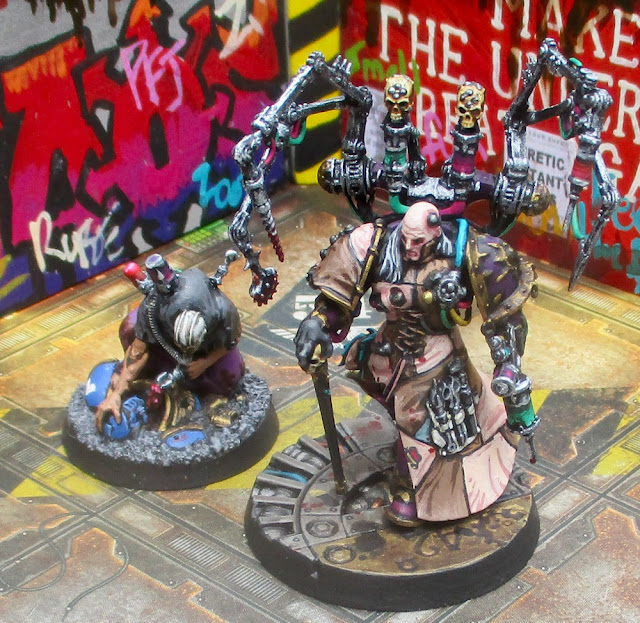 Bile used to be Chief Apothecary of the Emperor's Children... but I think he's off doing his own thing these days... sort of like Paul McCartney... so he's listed separately...
Black Legion
I also have a few Black Legion items that all came with assorted Blackstone Fortress sets - but can all be fielded in regular 40K 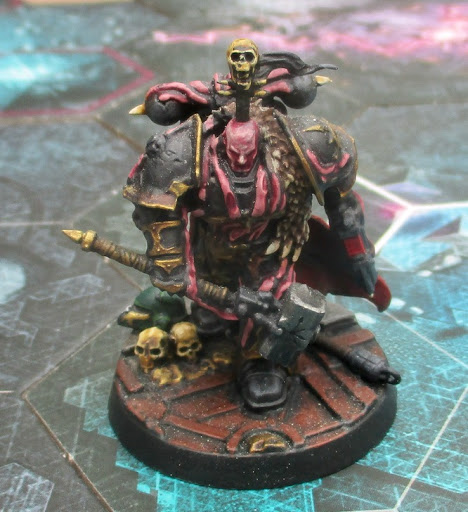 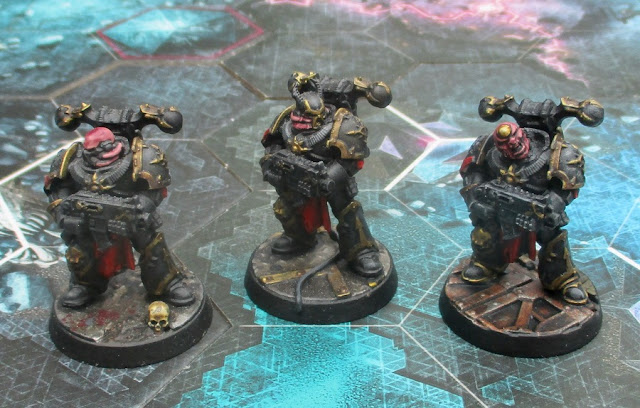 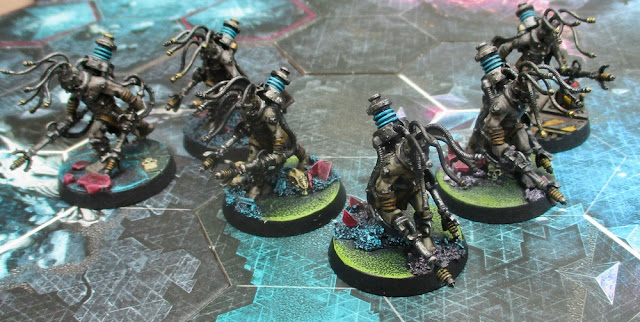 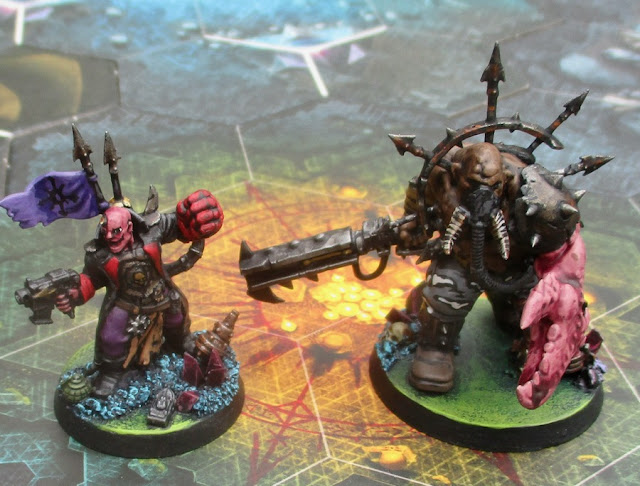 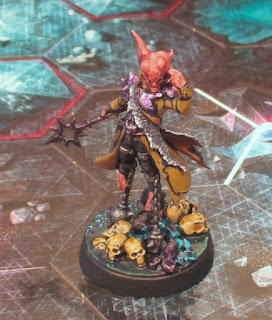 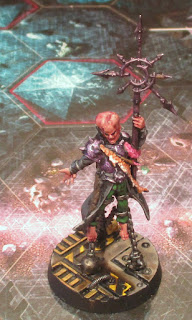 I do also have these two Rogue Psykers from the Blackstone Fortress game that could be added to the Emperor's Children forces...

Never intended to ever do any Nurgle stuff... but I found a lot of these and they were just way too cheap to pass up!?
In totally I've ended up with a Chaos Lord and 31 Plague Marines - including one with a standard. A few  are metal, but most are monopose plastics. 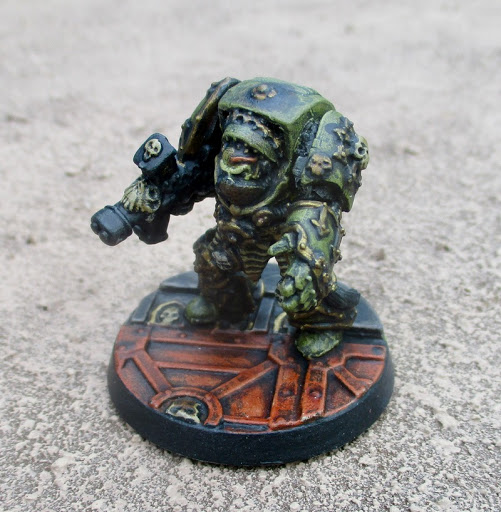 Chaos Lord Slugbottom the Vile, Belcher of Woes, Duke of Downright Dirtiness, Prince of Decay, and an overall Cool Dude (so named by Finnegan)

Death Guard as a Patrol Detachment - with Necromunda Plague Zombies passing for Pox Walkers (they're basically the same thing!) 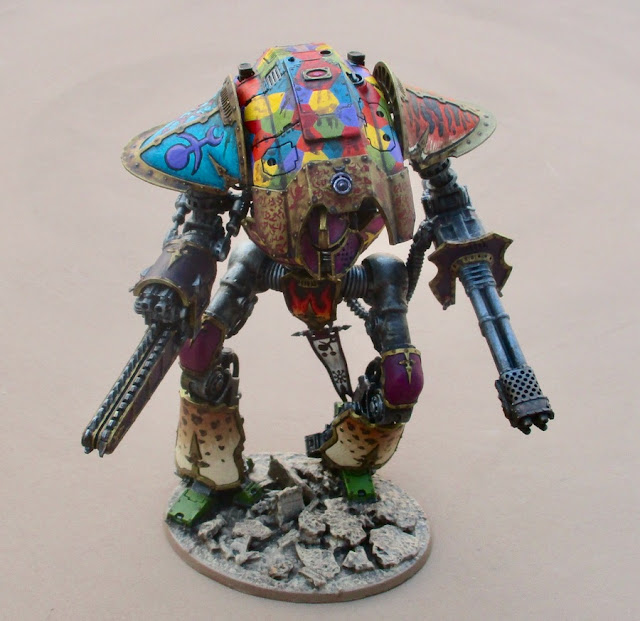 More pics and details can be found here:

I do have a second Knight that will be painted as a Renegade Knight Despoiler. At some point I wouldn't mind picking up a third (probably a Knight Desecrator/Rampager.

Apocalypse
I still have a lot to complete. And I've added lots since this plan was conceived. But, originally, I figured when everything I have was all assembled and painted, I would have:

200 Power Level in total... a pretty decent size for an Apocalypse army (though a little light on the Heavy Hitters!)... Or a smaller one with a few options... Ideally, at SOME point (probably NOT this year) I'd like to add a few things to these forces.  One of the new Keeper of Secrets models, for one! A third Chaos knight might be nice - just to make a full Super Heavy Detachment of three. I do HAVE A third knight I COULD paint up as a Chaos Knight... but I had plans for her... and if I got a third knight for this force, I think I'd rather get a Knight Desecrator or Rampager. Also, I love the idea of having SWARMS of Daemonettes - like, three units of thirty of them! Also, another two units of Bloodletters might be fun - just to upgrade the Khorne patrol into a "battalion" detachment... And maybe some Nurgle character to lead the Deathguard detachment.

I picked up a few Chaos Vessels for the old Battlefleet Gothic game - that could ferry around the above forces from world to world... 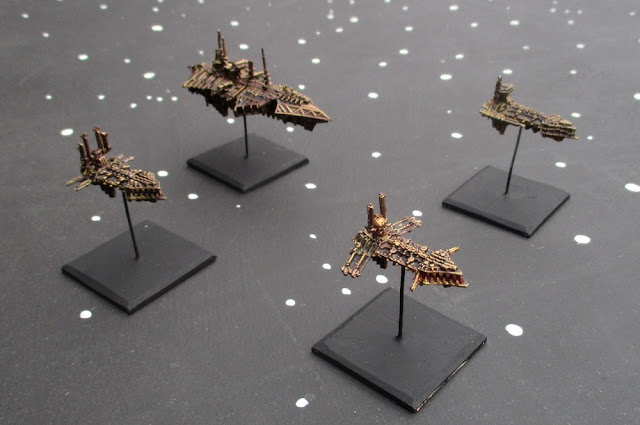 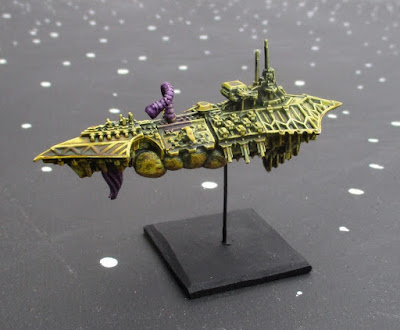