Okay... A little distraction… at least it’s the same conflict!

In the last week or so three big orders from Wargames Foundry, Gripping Beast/Woodbine Design, and 1st Corps (along with smaller ones from North Star/Great War Miniatures, Brigade Games - thanks Jon! – and Warlord Games) arrived. If only I had known how the Brexit vote was going to go and that the pound was going to tank… I could have saved a couple hundred dollars… ah well… I may just order that one last brigade I need sooner rather than later!

Gripping Beast/Woodbine Design was the first of those orders to arrive so I got to work on them first. I did order a few things that weren’t directly related to the Vimy Project – like these Gurkhas with Kukri knives and some Turk and Australian casualties and some shepards and a warlord to go with my other Medieval Muslims.

The Canadians are taking a bit longer as they actually required assembly. The Gripping Beast/Woodbine Design British come with separate heads and can be ordered with one of 17 different head options!? I mostly went with plain old Brodie helments, but I got a few packs with SD caps, bareheads, bandaged heads and gas hoods to throw into the mix. The first battalion of the brigade is assembled and being painted – they will the 22nd Battalion, CEF (the vingt deuxiéme).

This past Saturday the copy of Agents of S.H.I.E.L.D. I requested throught he local public library finally showed up, so we’ve had a lot of TV watching to do this week. (we get DVDs for a week, being a new one, it won’t be renewable!) I think we’re about half way thorugh – luckily Friday is CANADA DAY and Amanda will have the day off, so hopefully we’ll get the series finished up then. I’ve been getting a lot of work done while watching the program – prepping, priming, basing and such. Hopefully by the end of the week I’ll have three brigades worth of miniatures all prepped, primed based and gooped and ready for painting (and maybe even have the 22iéme done as well!)

In addition to all the miniatures I've ordered, in the last month I've also tracked down a few rule sets The Great War(hammer), Through the Mud and the Blood, and I even broke down and picked up a copy of the 3rd Edition of Contemptible Little Armies. I like some of the ideas in Through the Mud and the Blood, but I just don't think it will work on the scale I'm dealing with. The rules I previously used were a modified version of the 2nd edition CLA rules.  I'll probably stick to the same for the Vimy Project, but I thought it might be worth checking out some others as well - even if just to steal ideas for further tweaks to the rules I'm using. I think I might also pick up If the Lord Spares Us.

Those who are paying close attention will have noticed that there are more troops in this battalion than any of the other battalions I’ve painted so far. 20, in fact, where the others have only 15. This has nothing to do with relative sizes of the battalions at any particular point in the Great War and everything to so with the packaging of miniatures. Old Glory Miniatures packages their Great War highlanders in packs of 10 which include 8 riflemen, a piper and an officer… The Lewis Gunner and Bomber came in a completely different package of “Characters”, which put me at 12… 3 short of the 15 required for a battalion. So, at some point, I broke down and bought a SECOND pack of Higlanders - which gave me another 8 riflemen, a piper and an officer… The piper and officer are being used in another unit (of mostly home-cast figures) and the rest… well I painted them up with the formation patch of the 13th as I wasn’t going to be making any other units of highlanders using Old Glory Miniatures.

Half of the above figures I painted ages ago – the first pack of ten, then the Lewis gunner and bomber when I picked up the “Character” pack on a separate occasion. Those that I did paint earlier got a bit of a touch up – formation patches were repainted as were the helmets – so everyone would have a matching colour of helmet (originally I’d painted them the same khaki as the serge of their uniforms?)

The originals I painted with a half kilt apron - in the front - and tried painting a Government Sett on the pleats at the rear. The new ones I just painted as a full kilt apron because... well... I was feeling lazy! Though I did repaint the officers trousers - which were originally khaki - to look like trews.

Detail of the formation patch. The red patch of the First Division surmounted by a blue circle (blue for the middle junior of the division and the circle for the senior battalion within the brigade).

As I mentioned in the last post I recently ordered two more brigades worth of miniatures. One of the manufacturers I ordered from was Gripping Beast/Woodbine Design, who later in the day (or perhaps it was the next day…?) sent a notification that the package had been shipped via UPS and is to arrive later today!? ZOUNDS! While it’s exciting that it will arrive so quickly (considering I also placed an order with Wargames Foundry in May and I haven’t seen or heard anything from them yet… I guess that was just two weeks ago…). I’m a little anxious though as, in the past, when bringing stuff across the US-Canadian border UPS usually charged HORRENDOUS “brokerage fees” – now I don’t mind paying GST to the government – I LIKE roads and fire departments and socialized medicare and such – but the brokerage fees just go to UPS and are essentially extortion – if you don’t pay their fee, you don’t get your stuff! I’m not sure about stuff coming from the UK though… I guess we’ll see later today.

I have two more battalions of highlanders for the 3rd Brigade I’ll probably finish up – most of them are painted and just require some touch-ups – so I’ll probably finish them up next. The are mostly made up of the very first miniature I ever sculpted – a Great War Highander! The fourth battalion in the brigade was a regular battalion and I’m not sure what miniatures I’m using for it. I may have ordered enough extras from the Foundry  to do that unit… So I’ll have to wait until they arrive to finish it up.

After that I’ll probably launch into painting up a brigade of the 2nd Division using the Gripping Beast/Woodbine Design miniatures – though they will require some assembly (separate heads) – not to mention basing and priming… so there may be a bit of a break in posts while I get all of that done.
Posted by tim at 11:57 AM 22 comments:

Well… it’s been a busy couple of weeks around the Brown household! Dance classes and violin lessons wrapping up, with extra rehearsals and recitals, we’re still getting ready for our year end reporting next Monday – desperately trying to finish up a few projects for that - and a final violin concert this weekend. In the middle of this the copy of Game of Thrones Season Five I requested finally arrived at the library (being a newly-released DVD there was no chance we’d be able to renew it and thus had 10 hours of TV watching to do in one week) and we got a call from our family doctor a couple hours after The Boy went for a blood test, saying we need to get to the hospital PRONTO! Turns out the lab found he had a blood-glucose level of 42, which is apparently super high – like undiagnosed Type One Diabetes kind of high! So that ended up with us spending the afternoon in Pediatric Emergency and a couple days (and a couple of sleepless nights!) up in the Pediatric ward…

Usually I get a lot of painting done when watching TV series – I kind of just listen and half watch while painting, but I’ve just been so worn out and tired I couldn’t even focus on miniatures I was wanting to paint – even with my new reading glasses! So I actually just WATCHED the whole season.

I also, FINALLY, got a bit of a vegetable garden planted this last week… It’s a bit late, but hopefully we’ll get a bit out of it. I never got around to planting anything last year. May is just too busy…

Anyway, on to the minis! 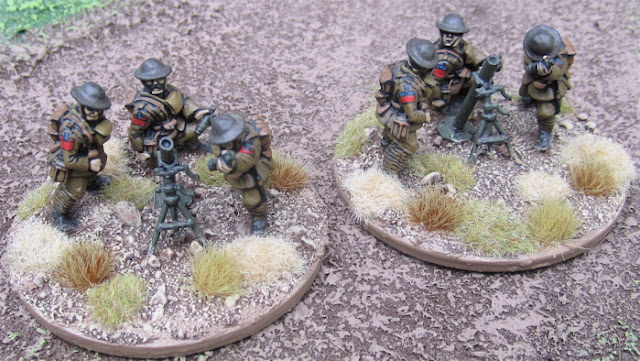 The 2nd and 3rd Trench Mortar batteries. (Figures are from Old Glory Miniatures)

As I’ve probably mentioned before, I’ve been trying to put together entire brigades from each of the different manufacturers of 28mm Great War figures (well, makers of Late War British – that can be passed off as Canadians – at least!). Unfortunately not all the manufacturers of Great War Miniatures make trench mortars (I’m looking at YOU, Wargames Foundry and Brigade Games!!). So a few of the brigades will have Miniatures attached from other manufacturers – which drives that little OCD part of me CrAzY!?  (Also the brigades made up of my OWN models will have trench mortar batteries made by others as I’m too lazy/don’t have the time or skillz to make masters for a trench mortar – but for some reason that doesn’t irritate me so…) 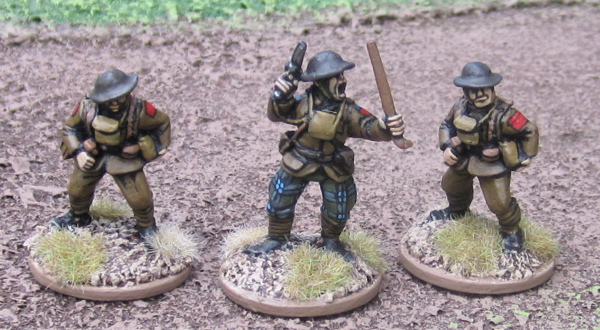 Some spare figures from Old Glory Miniatures that will be pressed into service as Brigade staff and signaler/runners.

More Canadians of the first division. Actually now I have the Trench mortars finished up I could take a pictures of the whole 2nd Brigade – which I now complete!

I totally broke my gaming budget for the year and ordered the next three brigades worth of figures (from Wargames Foundry, First Corps , and Gripping Beast/Woodbine Design) so hopefully they’ll be start showing up soon-ish and I’ll get to work on those. I was going to order one more brigade from Irregular Miniatures just to be a completist.

Labels: BEAVERS, Great War, Great War Canadians, Painting Update, Vimy
Newer Posts Older Posts Home
Subscribe to: Posts (Atom)
"There are some who call me.... Tim"
Welcome to Tim's Miniature Wargaming Blog. Here you will find reports (and pictures!) of games I have played as well as news (and pictures!) about my current modelling and painting projects.