Progress slowed on the painting front earlier in the week as I got busy with other things (which will probably be a recurring theme this spring) but last night Amanda and I stayed up way to late watching a couple episodes of Buffy the Vampire slayer and I got some more zombies finished. I’m making a push to finish up zombies because, after this lot, I think I have only 15 or 16 left to do (out of 120+).

The Amazons I painted last weekend, but didn’t get the basing finished until this weekend. 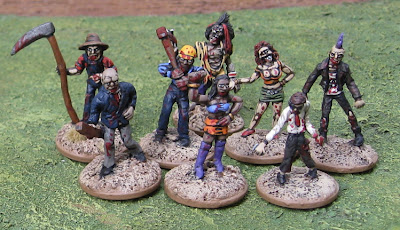 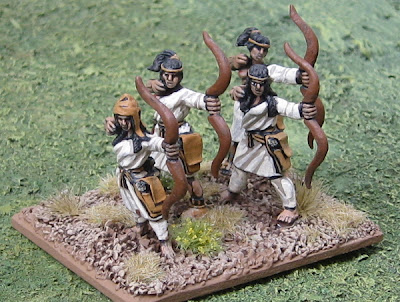 An element of Bow for my HoTT/DBA Amazon Army – figures are from Wargames Foundry . I have a half dozen elements of spear, and a couple Cavalry and Light Horse (or Riders) and a Knight General (chariot) to finish up.

I’d like to get some more HOTT gaming in.

So much to do, so little time.

Hopefully the rest of the zombies!
Posted by tim at 9:33 PM 6 comments:

I finished up a few odds and ends this weekend…. 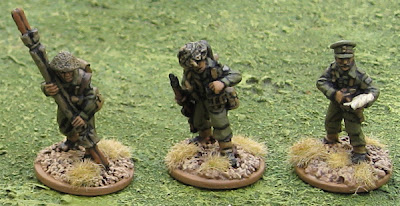 A command team from Warlord Games for my WW2 Canadians. The signaler and the officer I plan to use as a forward observer team of some sort and the stretcher-bearer will be attached to a platoon HQ.

A few odd moderns from The Assault Group: a Russian (with an AK carbine), a figure that was meant to be an SAS trooper that I’ve painted in a mix of camo to use as a survivor or contractor or perhaps some generic special operator, and a pair of snipers. One of the snipers I’ve painted in American woodland camo and the other in olive drab (thinking I could pass him off as a Cold War Canadian). 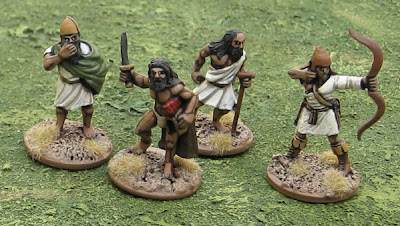 Ancient Greeks. The fellas are from Black Tree Design, and the Amazon is from Wargames Foundry . 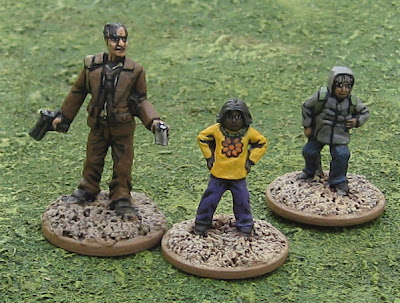 A few modern civilians. The alcoholic investigator is from RAFM and the two kids are from Reaper Miniatures. 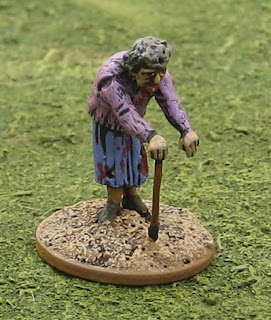 I have a few more amazons that I finished that are being based for a HOTT/DBA army. After that? I have a lot more zombies and moderns on the workbench…
Posted by tim at 4:22 PM 3 comments:

I’m not sure why I decided to finish these up…? I guess they were part done… but nowhere near half done or anything and I have no immediate use for them… but I finished them up just the same.

These are Russian MVD troops from The Assault Group. Four of them I had previously painted, the rest were finished up this week.

I suppose I could have painted them in one of the green-ish/woodland camouflages that they seem to be more often pictured in (and then I could have passed them off as regular Russian troops – at least with the guys I game with!), but the bluey tiger-stripey looked… I don’t know… fun…? And that’s what hobbies are all about, right? Having fun?

I have seven guys with a carbine version of an AK. 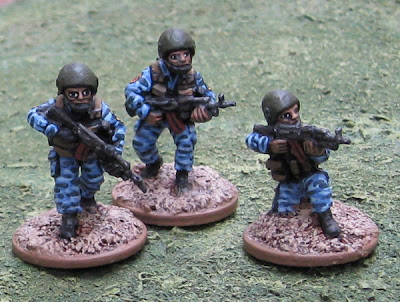 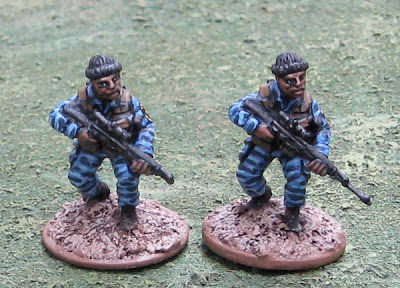 Snipers (with a broken barrel – ARRRRRGG!)

Heavier Support – I think these are PKM machine-guns and some sort of RPG. (some more broken barrel syndrom appearing on one of those guys….

I have an odd assortment of bits and bobs I’ve also finished this week that I’ll show off in a separate post.
Posted by tim at 4:36 PM 5 comments:

I think these ghouls are from Games Workshop. I’ve had them for ages and they’ve been floating around the edge of the painting table for almost as long as one of those little “these will be easy and quick I should just get them done” projects… that I never seem to get to. Well I got to them last night, and now they’re done. Huzzah!

Ihave no immediate need of ghouls, but they could be handy when I get one of the Cthulhu campaigns going again.

Back to zombies and survivors… or maybe some vehicles…?
Posted by tim at 10:55 AM 4 comments: 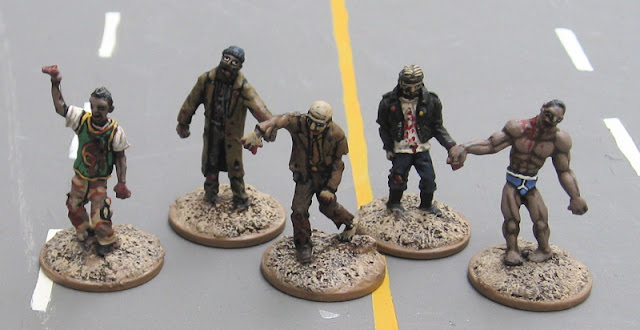 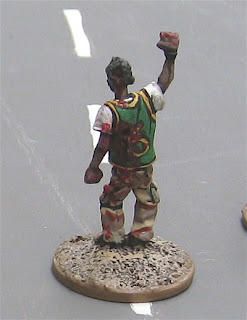 This one has a pretty gruesome exit wound on his back – as well as part of his scalp missing – perhaps he was chewed on by another zombie, prior to his undeath, in search of fresh brains!?

More o’ the same modern madness… zombies… survivors… and maybe some modern AFVs… I have some Marders I’d like to get assembled and painted up for the Germans.
Posted by tim at 9:50 AM 1 comment:

It’s turning into a pretty productive week around here. Probably has something to do with the second winter we are having since spring has arrived and the lack of desire to leave the house unless I have to… 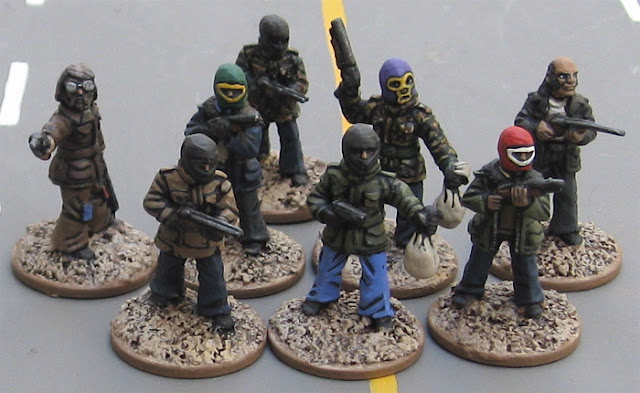 These are all from Killer B Games “Geezers, Shut it!” line. They’re meant to be bank robbers and the like, but I had a more martial purpose in mind for them when I picked them up. I imagined they’d be useful as “insurgents” in a Cold War Gone Hot/Red Dawn/England Invaded sort of setting, circa 1982 or so. Or perhaps a slightly less fictitious setting: Northern Ireland. Or perhaps even survivors of a zombie apocalypse around the same time…? I picked up the One of Everything deal – plus a couple extra of these guys with masks and shotguns - so expect more of the same over the next little bit.

More of the same, likely…. Though I have had a hankering to throw out some Colonial or Great War stuff…? The feeling will likely pass before I bother to do anything about it.
Posted by tim at 12:47 PM 2 comments:

I finished up a few Zombie Hot Spot Markers for Ambush Z. I actually only need 5 - as on a roll of ‘6’ the zombie player gets to choose which of the Hot Spots his reinforcements arrive on – but the pack came with 6… So I have six… I suppose I could have just left it without a number and used it for marking some other thing…? An objective marker? I don’t know…

I picked these up from Eureka Miniatures USA.

Originally I’d meant to have a lot more stuff cluttering up the base… but I got lazy… I do have a complete second set of them (for SECONDARY Hot Spots). Perhaps I’ll take my time with those and clutter them up a bit more. 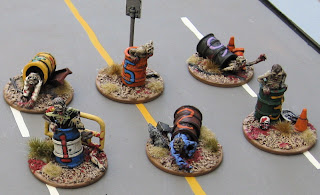 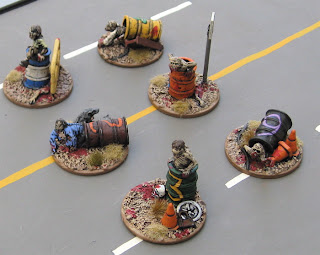 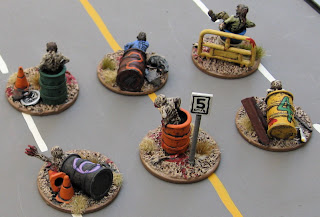 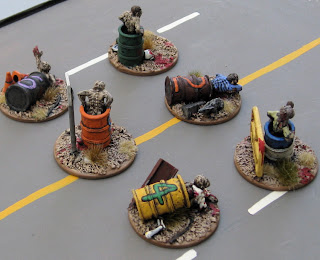 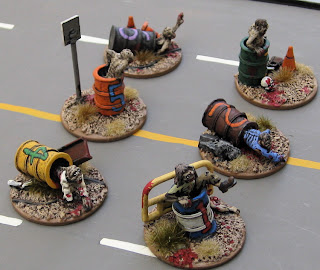 Probably more zombies… or survivors… or other modern-ish things…
Posted by tim at 10:28 AM 3 comments:

As the title said… 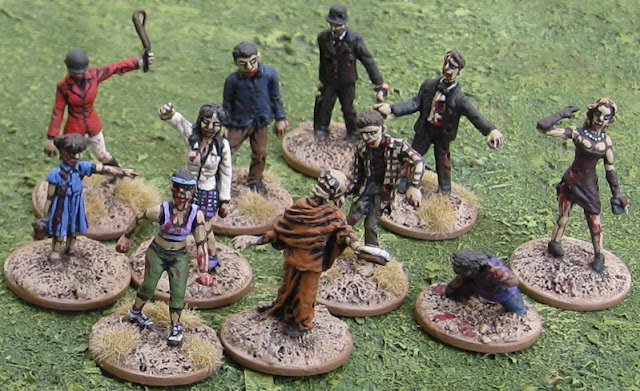 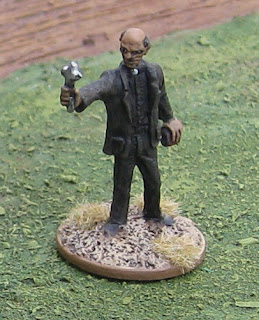 Think you’re going to need a bit more than that cross, father.

More zombies – perhaps some of the Zombie Hot Spot markers I’ve been working on for Ambush Z
Posted by tim at 4:24 PM 3 comments:

A few odd an sundry items rolling off the workbench this week…. 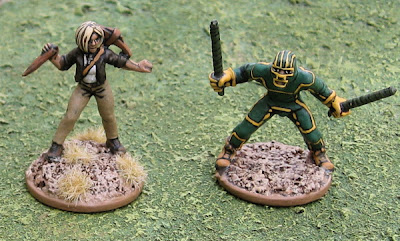 A pair of Heroic Adventurers from Hasslefree Miniatures 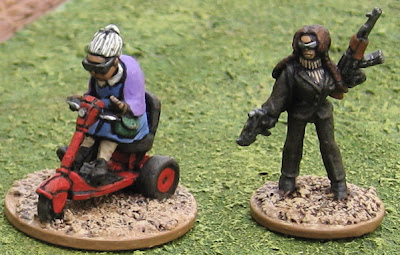 A couple other modern adventurer/survivor-types the granny on the mediscooter is from Victory Force Miniatures and the well armed lass (she’s also got a giant revolving grenade launcher slung over her shoulder behind her right arm) from Wargames Foundry. 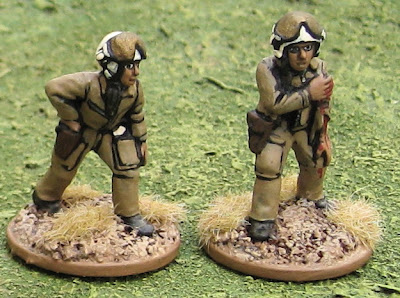 Finally another addition to the giant zombie horde… the punk-rocker zombie on the left (with the purple mowhawk) is from West Wind Productions and the rest are from Cold War Miniatures.

Labels: Modern, Painting Update, Zombies
Newer Posts Older Posts Home
Subscribe to: Posts (Atom)
"There are some who call me.... Tim"
Welcome to Tim's Miniature Wargaming Blog. Here you will find reports (and pictures!) of games I have played as well as news (and pictures!) about my current modelling and painting projects.