Finnegan actually suggested, in addition to a Kill Team campaign, we could organize forces for a parallel Warhammer 40,000 (9th Edition) Crusade Campaign - for when we wanted to play slightly larger actions. As the new Kill Team focuses more on using regular squads (or PARTS of regular squads) from regular 40K (and less take whatever you want!?) it should be easy to integrate a Kill Team into a force for a Crusade Campaign in 40K9E.

I have slowly been rebasing all of my 40K stuff - most of which were originally based on metal washers. At the time they were originally based, I liked the slimmer bases, but for many and varied reasons I've decided to rebase everything onto the standard plastic bases they were originally meant to be based on. Some of these reasons include weight (the metal minis plus metal bases mean a LOT of weight in those plastic drawers in my storage system!) and naming (with a thicker base, i can paint the names of each warrior on the sides of their base - for easier identification) and just a chance to do something more fun that the generic dirt and green and/or yellow/brown/dried tufts of grass, etc.

I do have a lot more Aeldari forces - like enough to field armies of many thousands of points. A lot of them aren't painted yet. Those that are painted, but not nescessarily rebased and considered for organization in the starting Combat Patrol  for the campaign can be seen on the 40K - Aeldari page:

A Patrol Detachment is made up of 25 Power Level worth of Troops and must include one HQ element and one Troops element. It CAN include a second HQ Element, up to two more (three, total) Troop elements, and up to two Elite elements, up to two Fast Attack, Up to two Heavy Support, up to two fliers and up to one Transport PER Infantry element included in the Detachment.

I had lots of options to chose from, but can only start with 25 Power Level - additional forces can be added to the force, for more options and tactical flexibility - even while playing Combat Patrol level games.

The Troops Element of this force is, essentially, Maesenir's Rangers Kill Team. The Patrol Detachment could basically be seen as representing The Big Boss - Farseer Thymiltelyir - and his two attendant Warlocks showing up with a Wraithlord to deal with something a little too big for Maesenir and his lot to handle on their own! 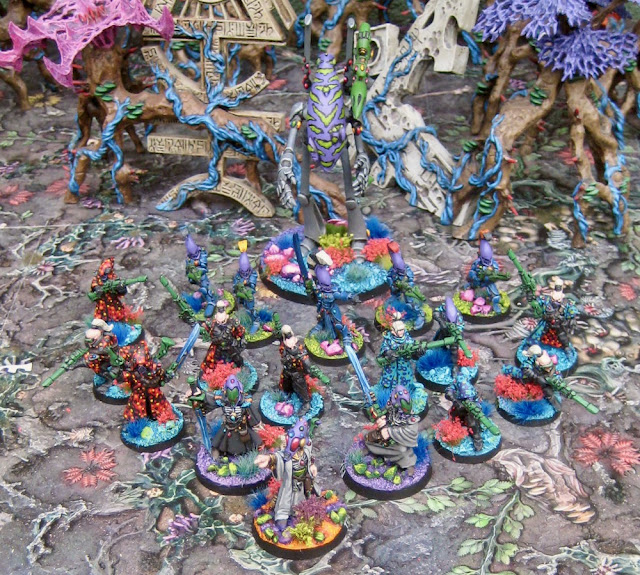 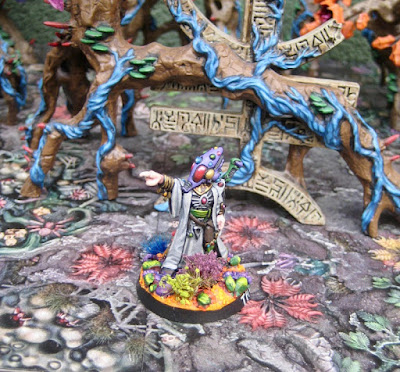 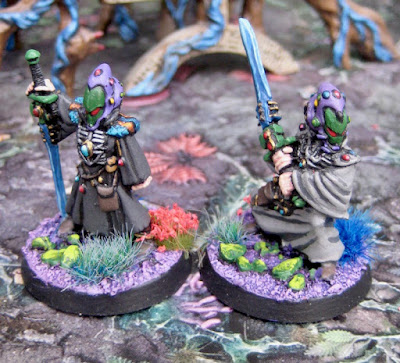 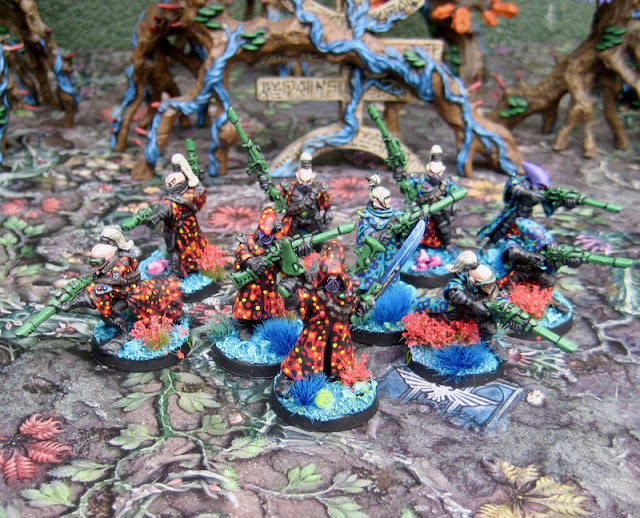 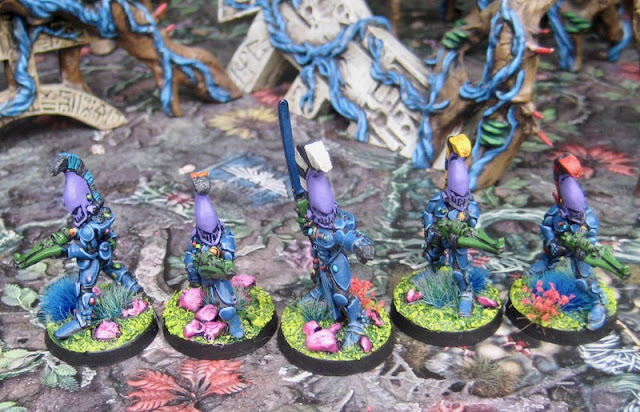 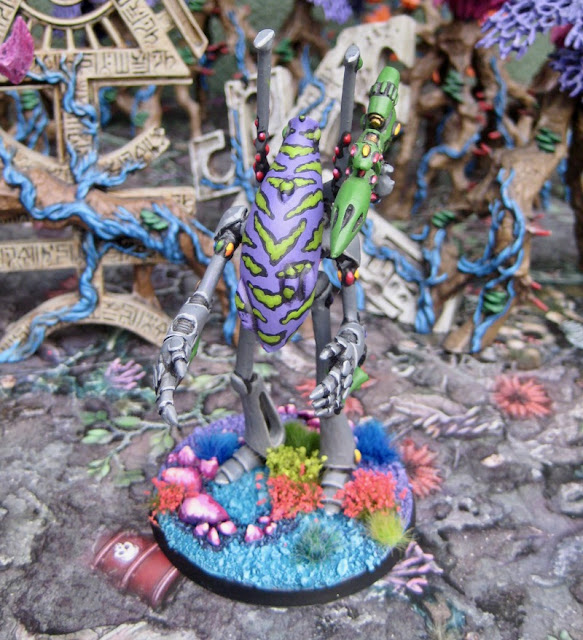 I originally considered adding a Squad of Dark Reapers 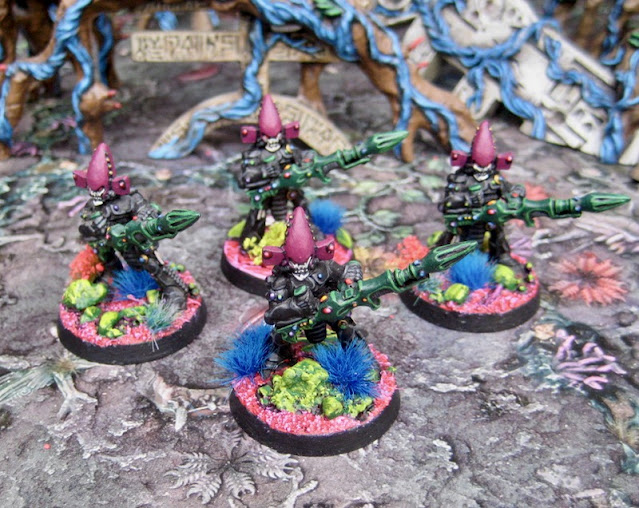 Loesenyth, Naerthyn, Dysenira, and Vielnivar of the Srhine of the Sunset Bouquet (it makes more sense in the original Aeldari...). only three will be fielded for the time being as they are fielded as three for 5 Power Level or five for 9 Power Level - I need one more to field a unit of five (or TWO more to simply field two units of three...). To bring these as a part of a Patrol Detachment I'd have to lose the Wraithlord and add in something worth 2 Power Level...

Other stuff I have painted that could be added as options (when I get to rebasing them):

At This point, playing at Combat Patrol level engagements, only one or two could really be added and would pretty much always mean leaving the Wraithlord back on the ship - or leaving some of Maesenir's Rangers behind... which... I GUESS is a possibility. I could just take the ONE Ranger unit of five - THAT could represent Farseer Thymiltelyir bringing out the BIG GUNS of the more hard hitting Aspect Warrior Shirnes to deal with a bigger problem and Maesenir is just along to guide them to the target that he has discovered...?

Of course I have PILES of other stuff I could finish painting up to add to and Asuryani force:

not sure how many of these I'll get to painting while we're just playing with Combat Patrol level forces. I doubt our Crusade Campaign will grow beyond Combat Patrols any time soon. I think I'd like to concentrate on getting ALL of my own factions up to Combat Patrol readiness first.  MOST of Finnegans 40K forces (Genestealer Cults, Orks, T'au, and Deathwatch) could be fielded as a Combat Patrol... but probably not Strike Forces... yet... (Maybe the Orks... MAYBE). Hopefully playing Kill Team and Crusade campaigns over the fall and winter, with a few of the different forces available to us will get him excited about enough about ONE of those factions he has to expand to the next level!

Next up should be LAST week's game(s) with Orion...