(Not to be mistaken for the Pussy Posse... I think that might be a Slaanesh Kill Team, or something...?)

I thought I'd try putting together a Chaos Space Marine Kill Team to start up a campaign with Orion. I have all these OLD Plague Marines - a mix of plastic and metal ones - that look rather diminutive next to the newer plastic Plague Marines for the Death Guard... So I thought I'd just use them as regular Chaos Space Marines... but with a Mark of Nurgle... and maybe even say they are not from the Death Guard... but some other Heratic Astartes chapter that went bad... like, literally, went bad - infected with the ROT of Nurgle! I thought it would be fun to have them get REALLY ANGRY when someone mistook them for members of the Death Guard ("Geez, man, not EVERY worshipper of Nugle is a member of the Death Guard... there are OTHER servants of Grandfather Nurgle... not sure why THEY get all the attention and press... I mean, just because you're a loyalist marine, I don't just ASSUME you're an Ultramarine!? have some RESPECT!")

To start off this warband I had to put together a standard Kill Team. Now, IF you're going to ever want to include CULTISTS in your Kill Team, it's probably a good idea to do that at the start. You CAN have up to twenty on your roster, so could easily have a fire team of Cultists and two fire teams of Chaos Space Marines and even have a few spare of each - just to have some different heavy weapon options or some alternates when one of your operatives gains a Battle Scar and wants to sleep it off... or whatever... When adding extra Operatives to your Data Slate it take one Requisition Point PER OPERATIVE... ANY operative. Doesn't matter if it's a Cultist or a Chaos Space Marine. So you can have a starting Kill Team with a Fire Team of three Chaos Space Marines and a second Fire Team of Cultists... and then you can spend three of your initial Requisition Points to just add operatives and have the three more Chaos Space Marines...

I didn't really HAVE any cultists that I thought I could pass off as Nurgle Cultists... I have a few Necromunda Scavvies that might have fit the bill - but I didn't have enough that looked like they had the weapons they were supposed to have... I had two or three that had a pistol and hand weapon and one with an autogun... the rest just had pipes or chunks of wood (or... some similar futuristic building material!?) with a spike through them.

So I just went with six Chaos Space Marines. 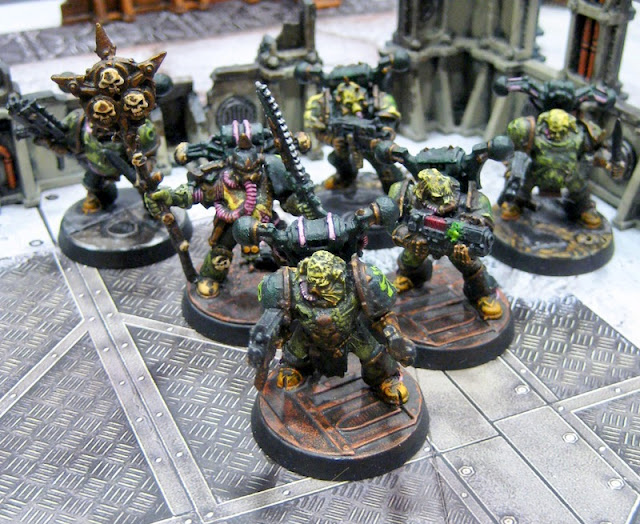 I thought it would be fun to say these were a few of the survivors of the Original Pusy POsse that Finnegan used in the Daemon World Campaign last summer.. but it turns out they were originally meant to be elements of 3rd Company, Mortarian's Anvil, Death Guard...

So I'm just going to RET-CON that and say they ARE the survivors of the Pusy Posse, but the Pusy were not actually Death Guard... they were IMPOSTERS - the Imposter Pusy Posse (say that five times, fast!).

I haven't come up with a new name for the chapter they've come from, just yet... but it probably doesn't really matter...

These are the members of the Pusy Posse 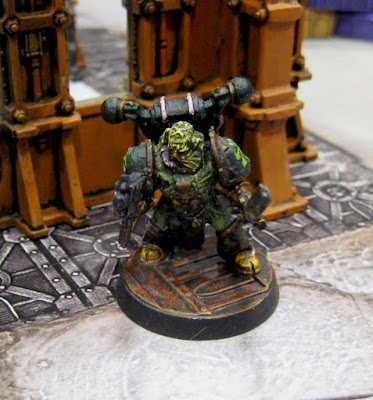 Brother Brutt is a bit of a joker who loves to laugh... mind you his laugh sounds like a the horrid rasping of someone about to perish of a coronavirus...

(He is carrying a sword, but it's so rusty, it doesn't really count as a weapon... it's more of a mark of office or something like that) 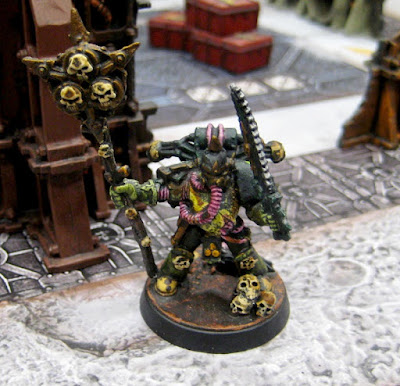 Brother Gloomfell's friends tell him he looks like Perturabo... which is, of course nonsense. He looks like a young (like, as in, still vaguely human) but sickly, bloated and puss-covered Mortarion. 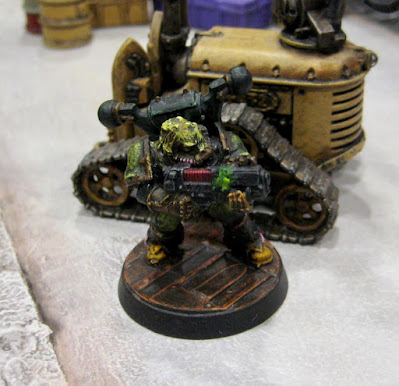 Brother Logg enjoys long walks in the ruins of Imperial Cities fallen to the Chaos Gods at sunset. 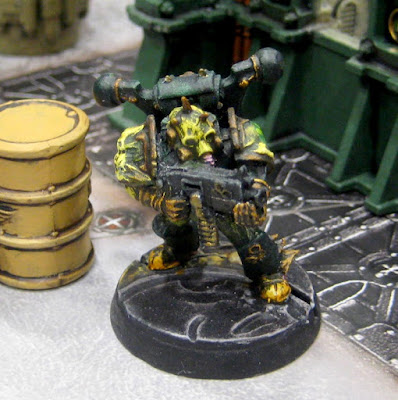 Brother Volghor's life was fab. He just need someone to share diseases with... 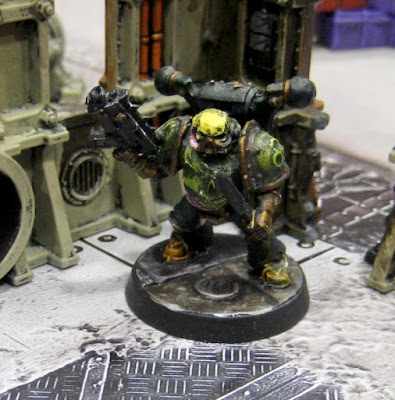 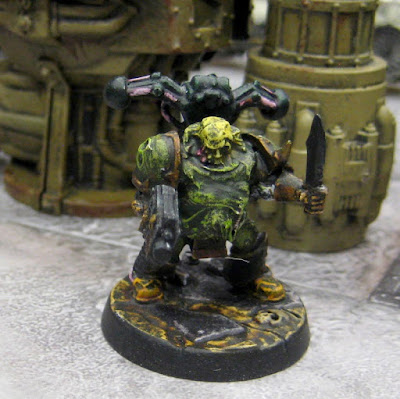 I spent three of my requisition points just buying equipment. Requisition Points get you an Equipment Drop five Equipment Points worth of gear, but what I wanted were items worth only two... and I wanted five of them... it doesn't specifically SAY you can spend two Requisition points and get 10... so I bought  five sets of Malefic Rounds - enough for each of the Bolter-armed marines and a set of Krak Grenades.

The other Requisition Point was to equip my Base of Operations with a Strategic Asset. I chose a Tactical Uplink - which allows the team to use one Tactical Ploy, per turning point, without spending Command Points on it!

Finally I had to select a Spec Ops mission to go on. I picked the Perform Ritual Spec Op. to complete it I first have to complete five games in which I score victory points from Hold the Line and/or Protect Assets tac Ops cards. After that is complete I have to complete a game in which I score victory points from the Plant Banner Tac Op. Should I complete this Spec Op, I gain one bonus Requisition Point and the Operative that scored VP from the VP for the Plant Banner Tac Op gains a bonus five XP and then five bonus XP to be distributed among the other Operatives in the team.