Last Thursday Orion stopped by to play some Kill Team! This week he brought his Space Wolves Primaris Intercessors!

I used Maesenir's Rangers - before the game I used up some Requisition Points to add four Dire Avengers to the Team and some equipment into the Stash. After the previous game, though it was clear that the Rangers were pretty murderiferous when they can stay hidden, they were also light and squishy and would probably not do nearly so well in a scenario where controlling objectives was a thing.... and I had planned just such a scenario!

We used Mission 1.2 Search and Retrieve out of the Octarius Book - except instead of ork junk piles, we used ruined bits of an Imperial Aquila Lander. The background was that an Inquisitor of the Ordos Xenos had stumbled upon a powerful Aeldari Artefact and was attempting to make off with it. Maesenir's Rangers as part of the recover effort. The Aquila Lander had been shot down by a Crimson Hunter of the Biel-Tymm fleet and Maesenir and his Rangers were sent in with a handful of Dire Avengers from the fleet to see if the relic could be recovered from the ruins of the crashed lander. Unfortunately, a Squad of Space Wolf Primaris Intercessors, who were also in the area were similarly tasked with recovering... whatever it was the Inquisitor had found.

There were three sections of the ruined Aquila Lander. Each team could perform a Search action at each, up to once per turning point - if they controlled it. Searching gained a Victory Point (and thus Experience Point) and a chance (6 on a d6) of finding the Relic.

The scenario wording was funny... under the Search special action is says, after detailing how you can do it and under what circumstances, "IF the relic has not yet been discovered, roll d6..." which seemed to suggest that you COULD continue searching the scrap piles even AFTER it had been discovered... I mean, I guess an Inquisitor's Aquila Lander could have all sorts of interesting things in it that could be recovered, IN ADDITION to the primary target of the mission...? 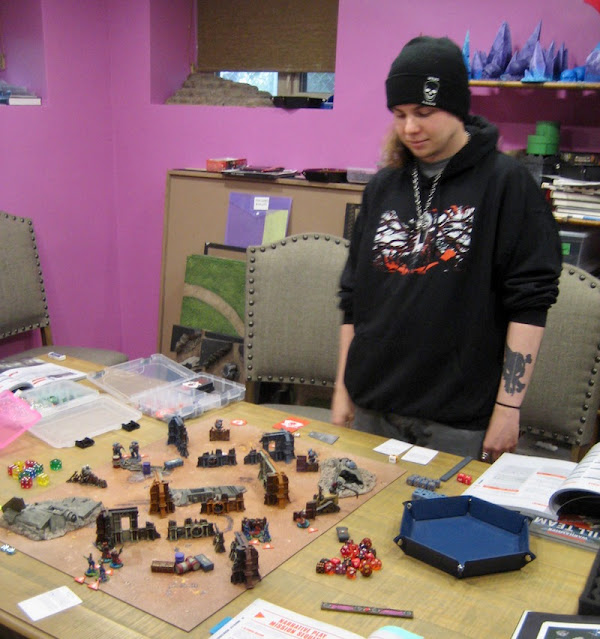 All set up and ready to go. 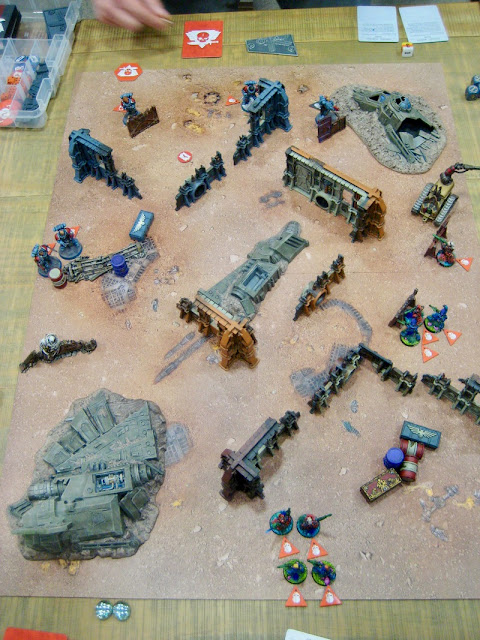 The Space Wolves had the initiative and kicked things off by running one of their Intercessors up to one of the bits of ruined lander and searched it - finding nothing... except a Victory Point...?

The tricky thing about controlling objectives when fighting Space Marines, is that the total APL within the control zone determines who controls it... As Astartes have 3 APL each and pretty much everyone else has only 2 (except Harlequins!) if you each have one warrior at a location, the Marines Control it.

Maesenir being closest to one of the other scrap piles decided to rush out there and search one before more of the Space Wolves got any closer and... 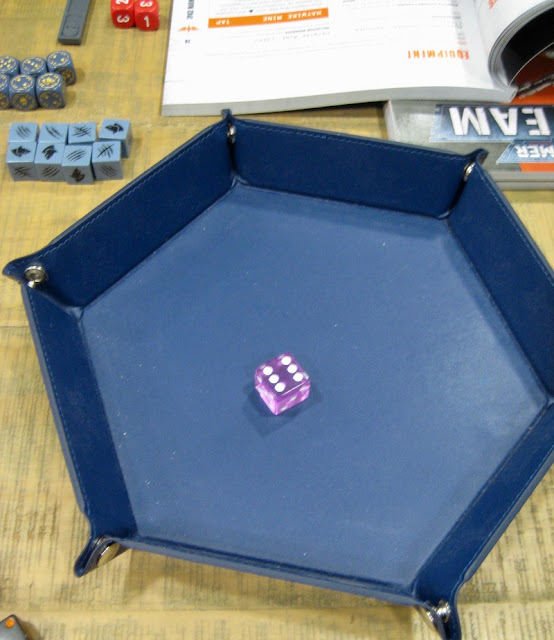 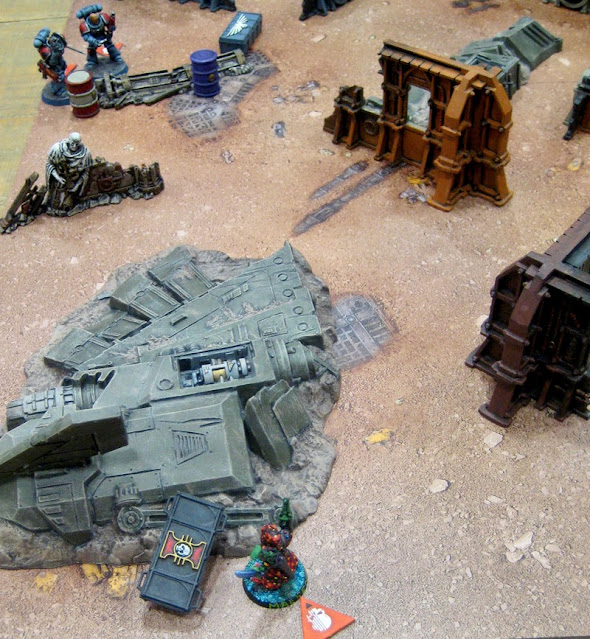 Kind of found the Relic on the first try...

The item was safely stored away in an Inquisition Stasis Crate, but Maesaenir had no action points left to even pick it up, let along get TF out of there!? 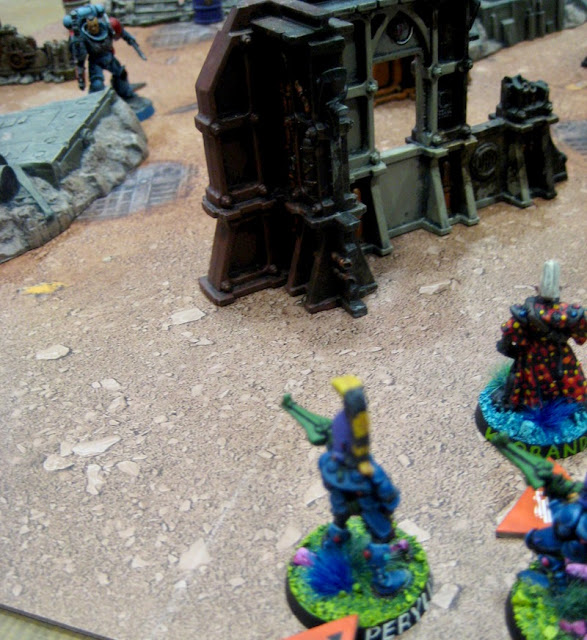 One Marine came charging towards the stealthy Aeldari... and despite their attempts to not be seen, they were taken offguard by the unnatural speed of the transhuman warriors. The Space Wolf got line of sight on Peryldil and shots from the Marine's boltgun shattered Peryldil's shurkiken satapult and helm. Unable to help much further, Peryldil faded into the background. 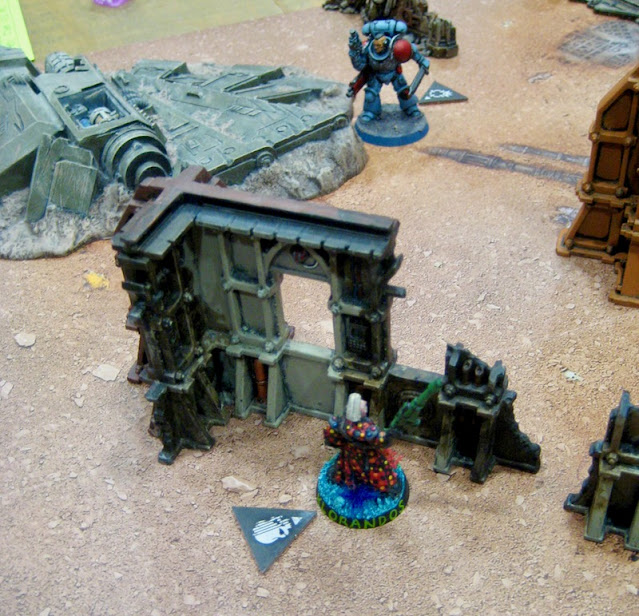 Klorandos dashed to cover behind a ruined wall and took a shot at the Marine. The Marine sustained damage that would have killed most mortals - but just kept going... 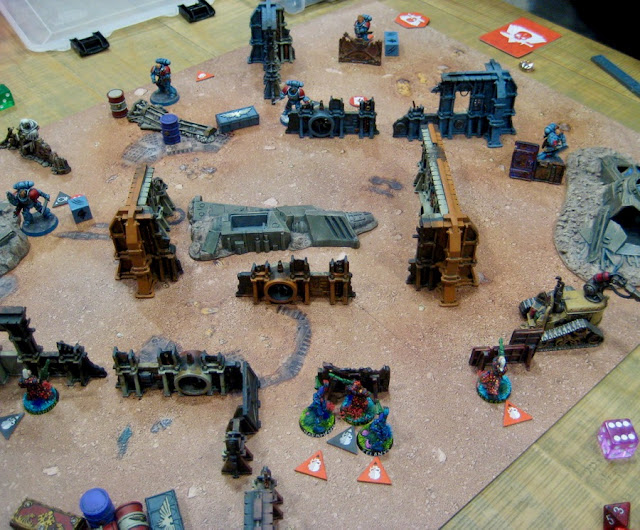 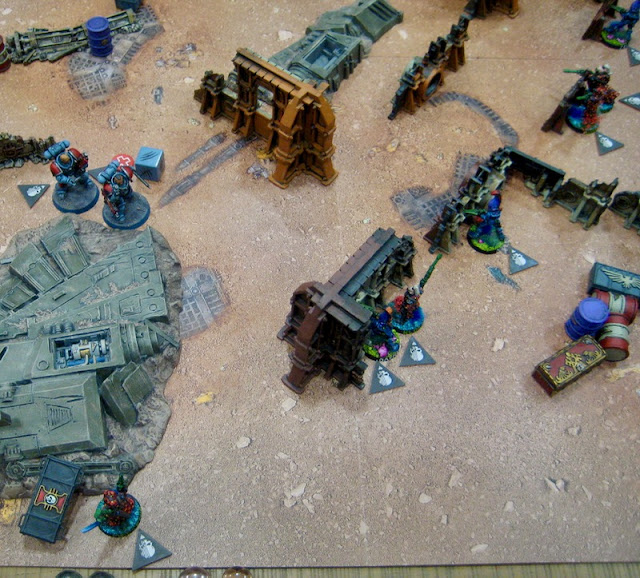 A second moved up to chase down the Ranger carrying the object which they sought. 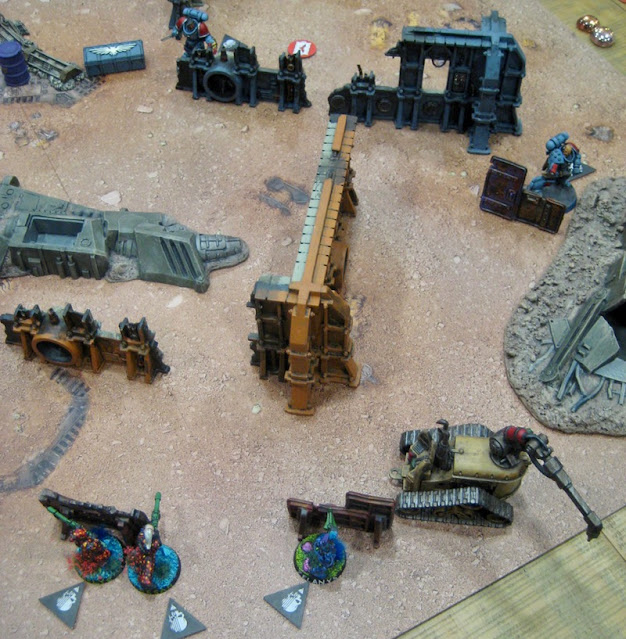 Aurelyc shot the Marine with the Grenade launcher, causing him to stagger. Ylessar took a second shot at him, and dropped him.

With Bolter Discipline and low numbers, Marines can potentially end up shooting three times a turn - when facing numerically superior forces (due to overwatch). I was a little worried about this as Bolters are DEADLY in the hands of marines... but with the new spotting rules, as long as you keep Conceal orders and stick to cover... they cannot shoot what they cannot see! 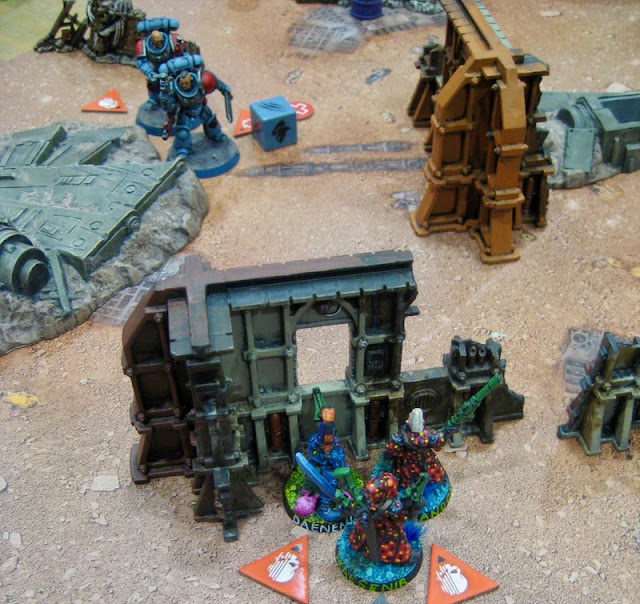 Luckily the Aeldari got the initiative and Maesenir was able to pick up the chest and run for cover behind his team. simply running from these beasts was not an option, they would have to slow them, first before making their get-away! 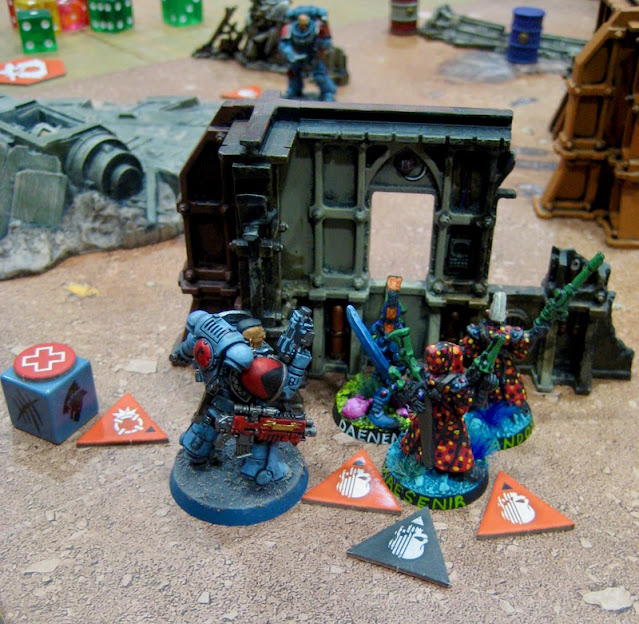 The Giant that should have been critically wounded charged and Daenemdrys stepped in to defend his leader.

(the Intercessor was only JUST able to get within 1" of Daenemdrys and just OUT of engagement range with Maesenir - despite what it looks like in the picture... models may have been bumped or repositioned slightly... before the picture was taken)

(Marines have some crazy good Ploys - Bolter Discipline and Shock Assault are nasty Strategic Ploys - allowing any in the Kill Team to shoot twice or fight twice in a turn, respectively, for the Turning Point. Tactical Ploys include Transhuman Physiology - which allows a Primaris operative to change a successful defence die into a critical success, And They Shall Know No Fear allows an operative to ignore the effects of wounding - which is what this operative above was doing!) and Only in Death Does Duty End which allows an operative that was ready - i.e. hadn't acted yet in the turn - that is taken out of action, to activate one last time and ignore the effects of being wounded!) 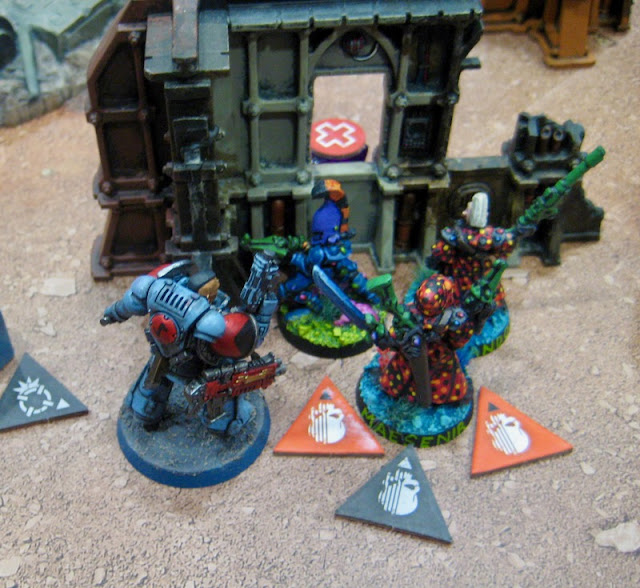 Somehow Daenemdrys survived the initial onslaught (and MAY have even dealt a bit of damage to the Marine, reducing him to ONE wound!?) As an attacker goes first, Daenemdrys would only need ONE success and to deal enough damage to finish off the marine before it fought back... So, Daenemdrys fought back and finished off the Marine...

Having an action point left, he maneuvered - hoping it could potentially BLOCK the other marine from following up and doing the same thing. 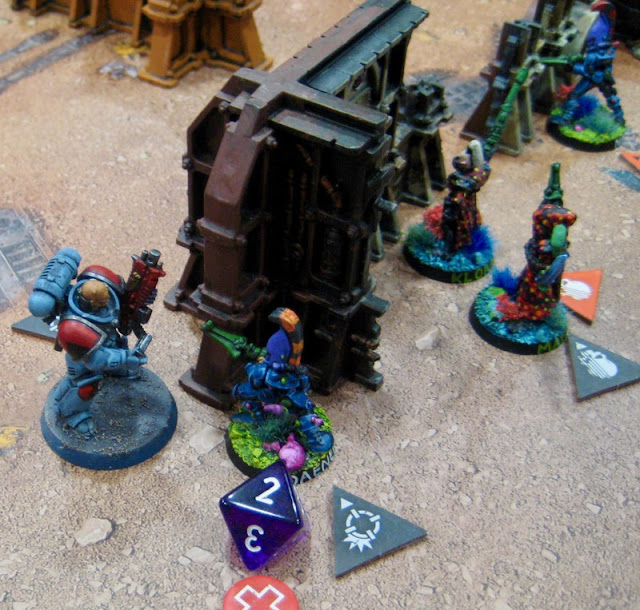 As it turned out... this had the opposite affect - moving to the corner brought Daenemdrys within charge range of the Marine - which he otherwise would NOT have been. The marine charged and finished off Daenemdrys.... a then there was some confusion about whether the Marine had LoS to Maesenir... we decided he didn't...

(afterwards I re-read the rules for LoS and understand it all a bit better now).

(and, yes, he woudn't have had LoS - the larger terrain bits - ruined walls - are HEAVY cover and therefore "Obscuring" as a sight line would have crossed the further chunk of wall, Maesenir was not a valid target! WHEW!) 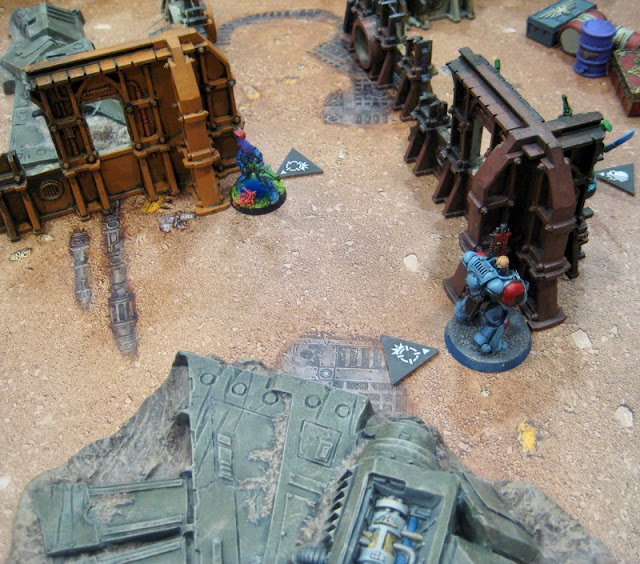 Naermenyl saw an opportunity to flank the hulking beast, just around the corner from his leader carrying their objective, and rushed out to pepper the marine with monofilament projectiles from his shuriken catapult. Only caused three wounds... out of THIRTEEN! YIKES!)

(I kind of also thought rushing him out and changing his order to Engage might draw out some of the other Marines that were skulking behind cover with Conceal orders...) 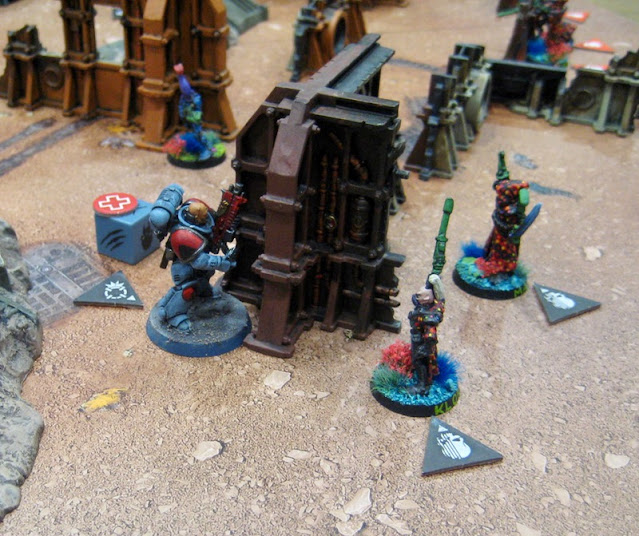 Klorandos dashed to the corner to put pressure on the Marine from the other side. A well placed shot from the Ranger's Long Rifle wounded the beast! 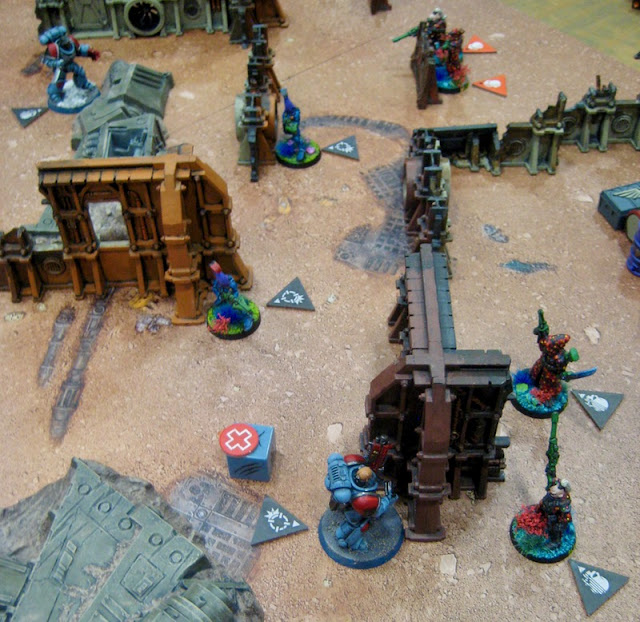 The sergeant DID move out, but remained in cover.

Zaelanys dashed from one bit of cover to another and also sprayed shurikens down the street at the Marine. 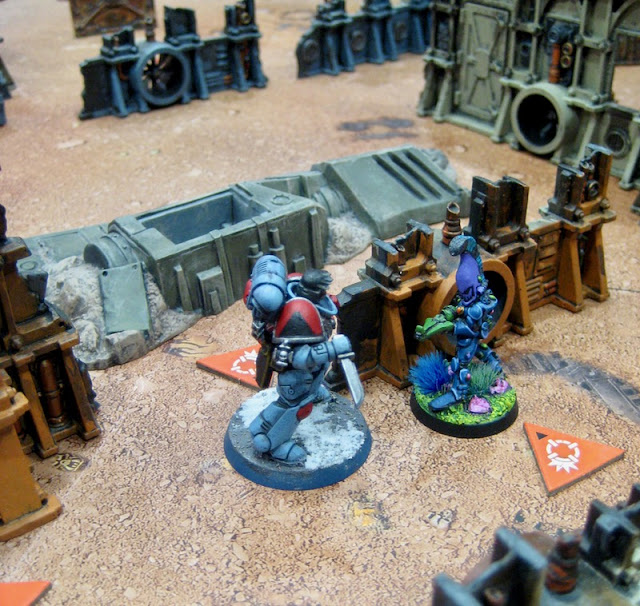 The Sergeant took the bait and charged Zaelanys. Zaelanys fought desperately (and did deal two wounds to the hulking brute), but the sergeant caught the diminutive Aeldar up in his powerfist and crushed both catapult and Zaelanys' arm, taking him out of the action. A replacement would need to be regrown, it was so badly damaged (if he didn't bleed out beforehand!) 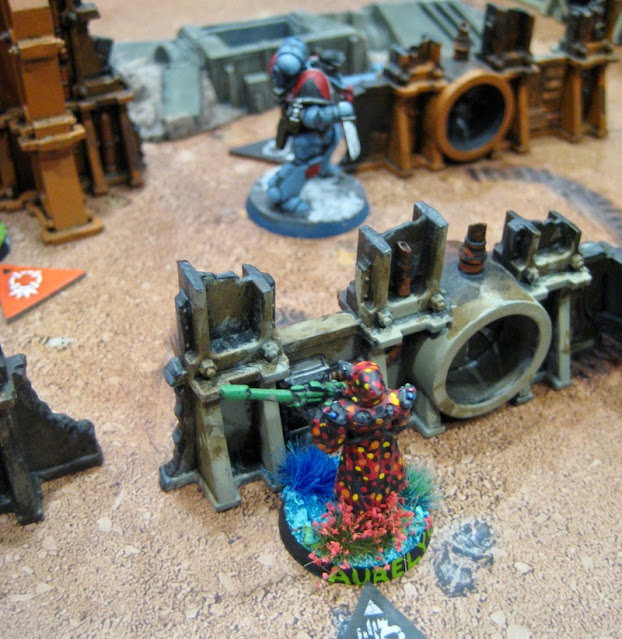 With the Sergeant out in the open he was an easy target for the Rangers and two shots brought him down.

Though I have no notes or pictures, I'm pretty sure the marine hiding in the corner was finished off by either Zaelanys or Klorandos...?

I don't recall who had the initiative in the fourth Turning Point... There was only one Marine left and basically we were just ignoring each other trying to score as many extra victory points from Tac Ops and searching the rubble. 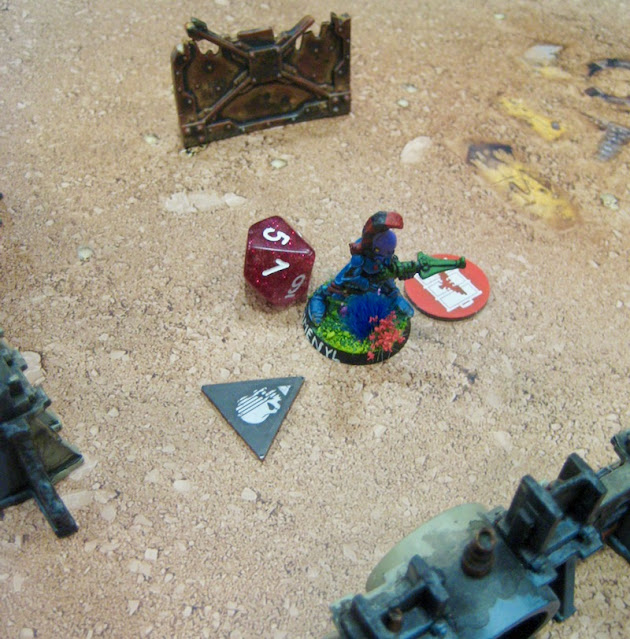 Naermenyl though he'd try to recover a thing that was laying in the open... (for one of MY Tac Ops cards - Retrieval - revealed at the beginning of the game, opponent got to place a marker anywhere on the board that wasn't within 3" of their drop zone... representing SOMETHING we wanted to pick up... +1 VP for picking up the thing, +1 for still holding it at the end of the game). 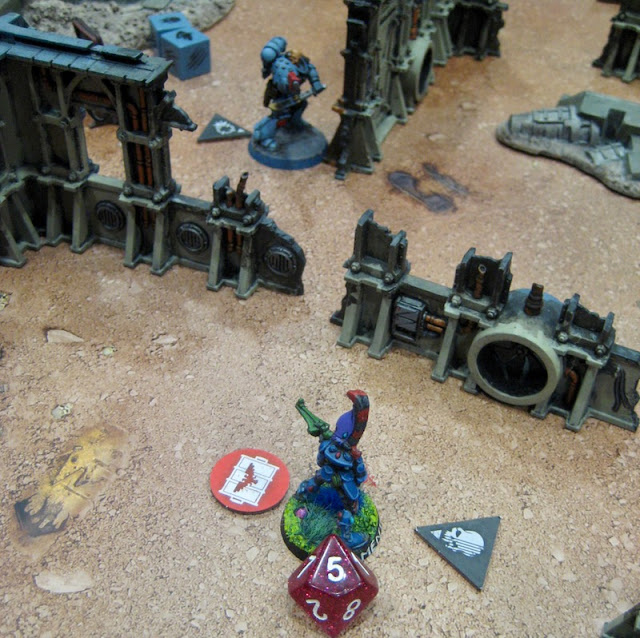 Well, he scored the point for picking it up, but then the last standing marine shot him down... Bolt round tearing apart his hip!

Looking at this picture and thinking of the rules I'd re-read... I'm not sure it was a valid shot... but we played it as such. Ah, well...

Maesenir and Aurelyc both scored points for searching scrap piles - that were well out of LoS of the Marine, scoring two more VP.

In the end it was the NARROWEST of victories - 8-7 for the Craftworld Aeldari!

Not technically in the campaign world... I still accumulated experience points for the Rangers (they could be called away to help out with something elsewhere - that's easily accessible through the Webway Gate they're sitting on top of...).

Also keeping track of injuries.... which did not go so well for these guys!

Zaelanys who was crushed by the Sergeant's Power Fist - Sapped Strength - permanently reduced Weapon Skill! It will take some time to fully reintegrate the newly grown arm...

Naermenyl, who took a bolter round to the hip at the very end of the skirmish as both parties were preparing to extract themselves, would suffer a Lingering Ailment -  move reduced by 2"!

Aurelyc made it to Veteran, with the experience gained in this game, and chose the Scout Specialism and selected the Picket Skill for this level - allowing him to be set up within 3" of the Drop Zone - i.e. can be deployed up to 3" beyond what would normally be the friendly deployement area!

We wrapped this game up so quickly, we had time for a second short one! Stay tuned for that report.... soon-ish...?

Orion is coming over again THIS Afternoon, so hopefully there will be ANOTHER game report in the not-too-distant(-ideally-BEFORE-next-week) future!