Oops! I Did It Again!

Just when I thought I was doing a reasonable job of being reasonable about game spending and miniature acquisitions, this happens.... 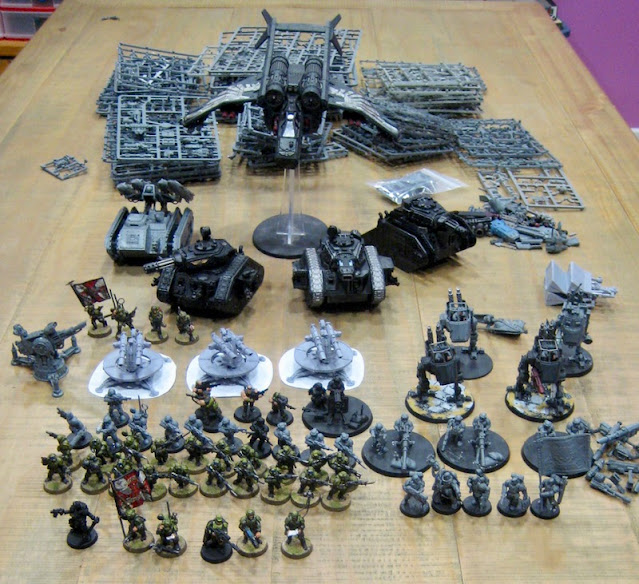 Local dude offered up his Guard force on the local miniature buy and sell on Facebook...

$200CAD for all this!? Mostly assembled. A lot of it painted - and pretty well!

WOULD I have bought all of this new...? No, probably not... I mean I WAS thinking of buying a single box of plastic guard so I could finish up a couple Guard Kill Teams (Necromundans and Antari Rifles) which would have been $55 on it's own... now I have that... plus so much more...

Sentinels WERE on my wishlist - as I'd LOVE to build a couple units of Tallarn Sentinels - as that was one of the things they excelled at, in the fluff...

Valkyries... always thought a couple would be fun - but so expensive! Now I have one (plus the one in a box to assemble....) I thought it would be fun to have one as a terrain piece in Kill Team - like, it just landed the Kill Team and they're dispersing from it into a hot LZ!?

Anyway... More Kill Team stuff coming up, as that is what I am currently obsessing about!

Pretty excited about the New Box recently announced - I better get all the Octarius stuff painted - as it will be hard enough to convince myself (let alone Amanda) that I should get it, if I haven't even painted the previous one!?