It's the Victoria Day long weekend her in Canada and I stayed up stupid late last night to finish up this latest batch of Dire Avengers....

The two groups will join my two existing squads to make two squads of TEN!

I do have a few more Dire Avengers (5 or 6?), which, at some point, I'll paint up to use as a third squad... and some day I might try to track down a few more figures to make it a full unit of ten as well...

For now, this completes the force I'll be taking to the Strange Bedfellows Team Tournament in June.
Base Detachment - Biel-Tim (as Biel-Tan).

My 1000-point Asuryani "Base Detachment" force for the Strange Bedfellows Team Tournament in June. This includes: 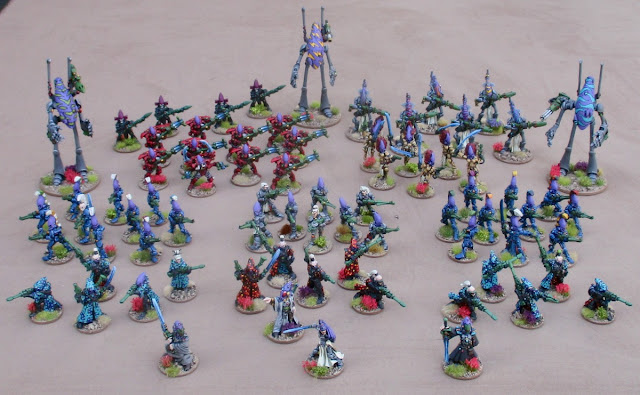 I'll be taking a break from the Craftworld Eldar for a month while I crank out 1000 point of their dark cousins: The Drukhari!