A little over a year ago, Amanda and I bought a used (mostly assembled, but entirely unpainted) Dukhari force of a local dude that wanted to offload them. From this I did paint up a Kill Team for her to use last fall, but very little movement had been made since then... Until now...

This weekend was the Strange Bedfellows 40K Team Tournament, and we decided to enter a FAMILY team. Unfortunately, Amanda was away in the U.S. at a Yoga thing, but she said it would be okay for Finnegan to make use of her Drukhari so we could field an all Aeldari team. (If she hadn't been away, it might have been me and Keira with Asuryani, Amanda with the Drukhari and Finnegan with his ORKS!!). Instead we teamed up with our friend Other Tim and his Alaitoc Asuryani.

This is the entire Crimson Wave Wych Cult force Finnegan used in the tournament. It was lead by a solitary Succubus and included three units of 10 Wyches, one unit of 20 Hellions, and one unit of 12 Reavers. The unit sizes were not ideal.. but there were very specific detachments that were to be used and this is what we had available that could fill those spots. 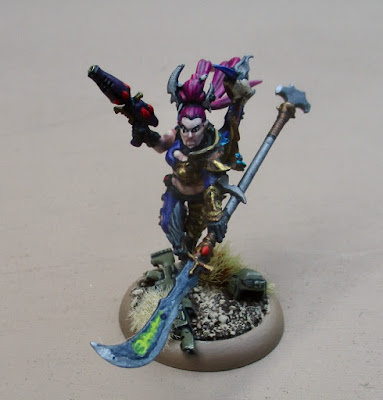 The Succubus leading the force.

Wych Cult Unit Number One. These weren't assembled by me. I think the Hekatrix (the unit leader) may have been converted from a kabalite figure...?

The entire Drukhari force so far. This could be fielded as a "Battalion" Detachment with Lelith Hesperix and a Sucubus as HQ requirements, the three Wych units as the Troops Requirements, and the Reavers and Hellions fielded as two to three Fast Attack options.

I'll need to paint up another Helliarch to lead the second unit of Hellions if we decided to split them up into smaller (more manageable!) groups.

Still to do are another nine Reavers, ten Hellions, a Venom, an Archon, and a couple dozen Kabalite Warriors. I might try to convince Amanda she needs a Ravager (or two) for some more hard-hitting, anti-armour capability. Or maybe a flier like the Voidraven Bomber or a Razorwing fighter...? 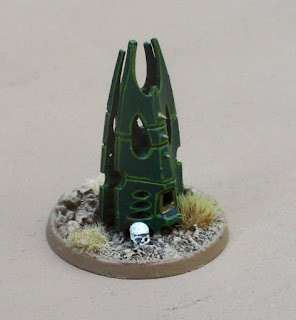 An objective marker I made up with spare Drukhari bitz. I have a couple more in the works. Ideally I'd like to put together four - each with a different number of skulls on the base to indicate the objective number.

Planning to run a short trial campaign over the summer and maybe a larger extended campaign in the fall - along with a narrative campaign weekend in October!!
Posted by tim at 3:39 PM