On Thursday evening I made three small “trophies” or “awards” to give out on the weekend. I didn't want to post these BEFORE the campaign lest it cause any behavior changes in people determined to WIN one or the other... (I didn't want to actually ENCOURAGE treacherous behavior!?)

The Lord of Battle – to be given to the player that won the most victories on the battlefield.

The Future Necromancer – to be given to the player that lost the most stands. 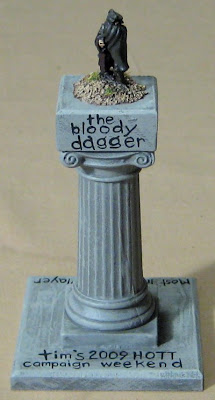 The Bloody Dagger - to be given to the most treacherous player.

All three are on 60x60mm bases and so double as “Barker Markers” for 28mm DBA/HOTT armies.

I probably won't get to the report of the weekend until Monday - as we are playing some more games today... But the campaign went exceedingly well and everyone had a good time!
Posted by tim at 7:40 AM