Okay so I had promised to do the 20mm WW2 next but it’s turned out to be a bit of a daunting task, so I thought I’d do something a little easier…. Get that sense of accomplishment and excitement before I take on the 20mm WW2 monster…

My interest in and knowledge of the Seven Years War is mostly limited to North America – and the figures reflect that. The campaigns I would be playing are those fought in North America.

I played a game at Edmonton Mayday last year that used a system called “Two for Tea” by Bob Barnetson, which is based on Warmaster (report and pics HERE). It was a lot of fun and I was instantly sold on it – I came home and re-based all my figures to use them with the system! I played a game with my friend John (report and pics of that game HERE) but have done little with them since. I would definitely like to work on these again over the next year – there are not many of them and a month of dedicated work would probably finish them up.

Here’s some pics of what I’ve got:

Two regiments (battalions) of British. I should probably change these so there’s a King’s colour in there in addition to the Regimental Colours… These are all figures modeled and cast by my friend John Bertolini. They were originally meant to be for the War of the Spanish Succession. I figured the uniforms were “close enough” for me and painted them up to use in the Seven Years War.

A unit of Old Glory Militia.

Some individually mounted figures for use in skirmish games. Mostly Old Glory, though I think there’s a Foundry figure in there, and Rafm, and I thought I had some West Wind figures… but they seem to be absent now that I have a close look…? 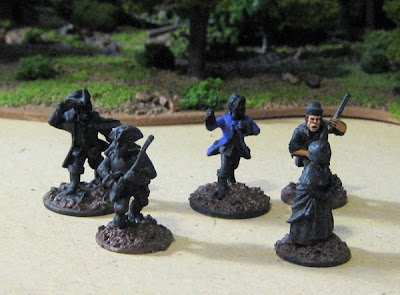 Some more individuals to finish painting up. Two of those are definitely West Wind. Two are Old Glory… the woman…? Foundry…? 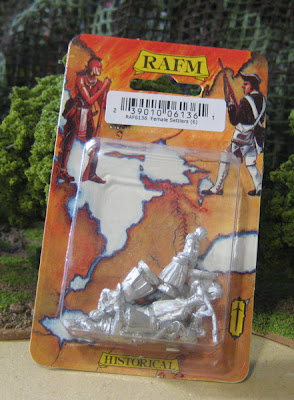 Some Rafm “Female Settlers” most will be based individually for skirmish games… but one or two might find their way onto a stand of militia.

More stuff to be painted… Guns by Rafm, crew by John. 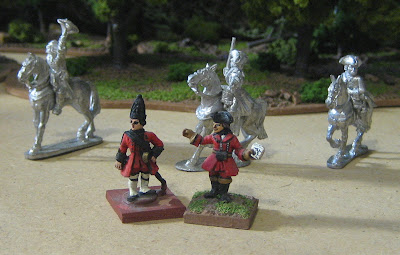 Command elements which need to be finished – these are all from Old Glory.

Some old Rafm British Marines with really old paint jobs! Need to be re-painted and re-based (and I’d need a few more too!) 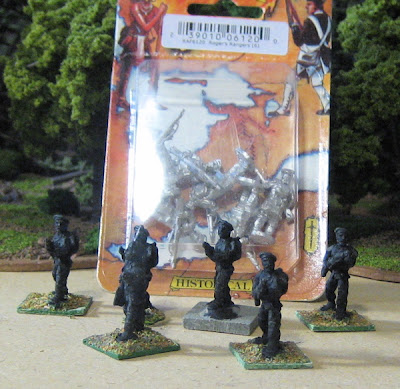 A regiment of Highlanders! All these packs were picked up earlier this year when Rafm had a “1986 prices” sale on the line (which is about the when I bought the ones I previously had!) - $4 a pack! 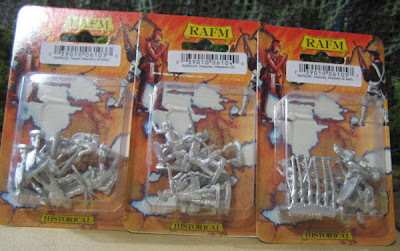 Four Battalions of French Infantry – Don’t ask me which Regiments – I used to know. I could go look it up… Whatever they are they more than likely fought at Quebec (or maybe Louisburg). The ones in the foreground, on the left of the picture are from Rafm, as are the standard bearer and Drummer in the unit next to them. The rest are all from John.

One battalion of French to finish up. These are all from John. 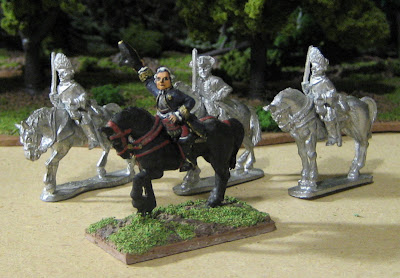 Le Marquis de Montcalm and his colonels (which still need to be painted!) 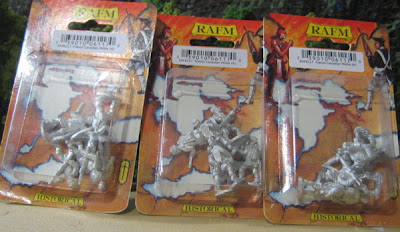 French Canadian Militia. I should model one of my own and cast piles! 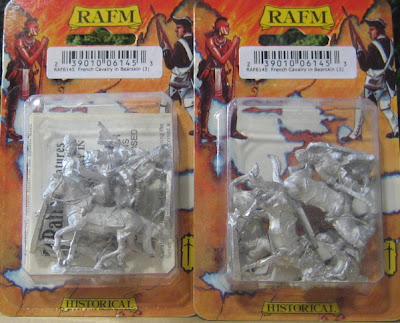 The only non-North American troops I have from the era – Jacobites! These are from Old Glory.

Have Finished:
2 Regiments of Foot
Regiment of Militia

Still to get:
… Well maybe if/when I get the above done I’ll borrow John’s new, re-mastered moulds and cast a couple more regiments.

Same as for the British - if/when I get the above done I’ll borrow Johns new, re-mastered moulds and cast a couple more regiments.

Have finished:
a couple...

Have to paint:
A couple more assorted Old Glory and West Wind figures
One pack of Rafm Female Settlers – a couple of these might make it on to various militia stands – and maybe some militiamen will be based singley…

I could do with a couple infantrymen on single bases for skirmishing games… I’ll cast my own at some point.

You can see more pics of John Bertolini’s figures HERE!

Next on Tim's Miniature Wargaming Blog:

Well I am supposed to be geting together with CK for a little Blitzkrieg Commander action so there might be a report from that... or there might be more of me taking stock... I'm not going to make any promises about which that might be, however...
Posted by tim at 9:41 PM