Clearing a few more things off the painting desk...

The missiles come from the Departmento Munitorum like that. The forge world that produces them paints them so for to easily identify which is which (nothing is more embarrassing, not to mention wasteful of the Emperor's precious munitions, than blowing up a single dude in the middle of a large quad with a Krak missile, or having a Frag missile ping off the side of a tank...), but with little concern the intricacies of tactical stealth considerations. Normally a team of veterans, such as these, would repaint them in theatre immediately after issue, but with the rapidly changing situation of this deployment, they didn't have time (or perhaps paint!) to do so between rearming and heading out on the next mission!

The full squad of them. This would be a veteran squad - as it contains additional Special Weapons.

Initially I just picked up one or two of these guys because I like the models. I thought I'd put together a mixed team of assorted Guard from various regiments that could be used in Kill Team as a Dirty Dozen type unit or as a unit of Inquisitorial Acolytes in regular 40K. I've managed to scrounge up enough of these guys to field a full squad now, though. I could still see them being used as Inquisitorial acolytes or as a straight Veteran Guard Squad in an Inquisitors force. 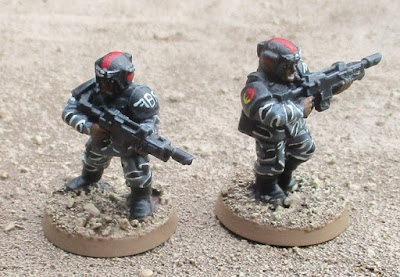 Two plastic Guard I tried painting up in old school Necromundan regimental colours. These guys are from the 2nd Platoon of B Company, 5th Necromundan Regiment.

Not sure about that camouflage...

I have a handful of assorted plastic guard I thought I'd do in similar colours to use as a Kill Team... Or maybe to bring down to the Underhive when things get really crazy... 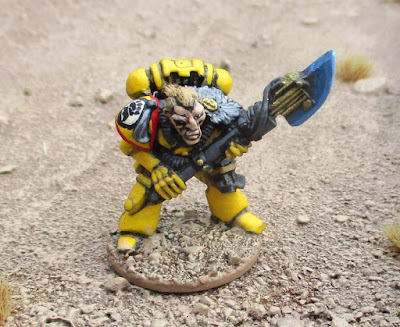 An old Rogue Trader era Marine I've painted up as an Imperial Fist.

The Imperial Fists maintain a fortress monastery on Necromunda, so that was my main inspiration for painting this marine in their colours. As I got painting him I started imagining a character for the figure. I imagined him being a denizen of the Underhive taking jobs as bounties. No one is quite sure why he's here. Some say he was sent on a secret mission by the chapter that has yet to be revealed. Others think he is a deserter - but such thoughts are spoken of in hushed tones and only to trusted compatriots. No one wants the Fists catching wind of this rumour, as everyone remembers the last time someone tried to rat out a renegade marine - a whole bloody Battle Company  descended on the Underhive and they utterly wrecked a half-dozen ancient domes, killing dozens and displacing hundreds more. No one wants that again. The rat didn't even get PAID! 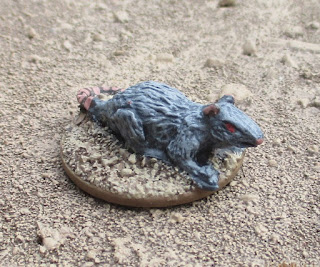 This is an old "pre-slotta" Citadel Giant Rat. They grow pretty big down in the Sump... 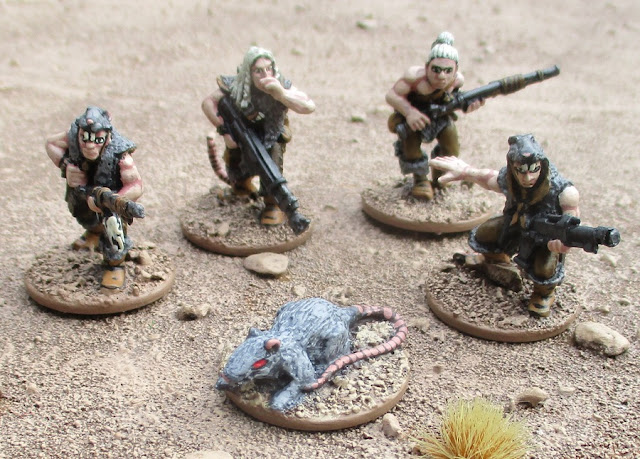 Not sure if it's going to be a "pet" for my ratskins, or just something that they hunt. Either way, a "wandering monster" for incursions into the deep caverns of the hive bottom

Well... lots of stuff sitting on the workbench. But I've also FINALLY finished reading the actual RULES for Necromunda, so I'm going to try and get in a game before I forget them - or get them all jumbled in my head with all the other assorted 40k-ish rules (I mean, I've been looking them over and reading bits here and there to get a general sense of how things work and how gangs go together, but this past week I actually did a front to back read through and, in the process, picked up on a few things I wasn't quite sure about!)
Posted by tim at 8:12 AM