As with the LAST THREE WEEKS, I've been "studying from the masters" - reproducing the works of John Blanche from a Black Library art book I have called The Emperor's Will.

The original illustrations are, of course, © John Blanch and/or Games Workshop/Black Library and my studies  were done purely for my own private entertainment and education purposes and are presented here simply to share with the community a creative thing that I did. They are not now, nor ever will be, for sale. I do not take commissions of any kind.

Just a reminder I post (most of) these (plus OTHER stuff!) daily on my Instagram as well: 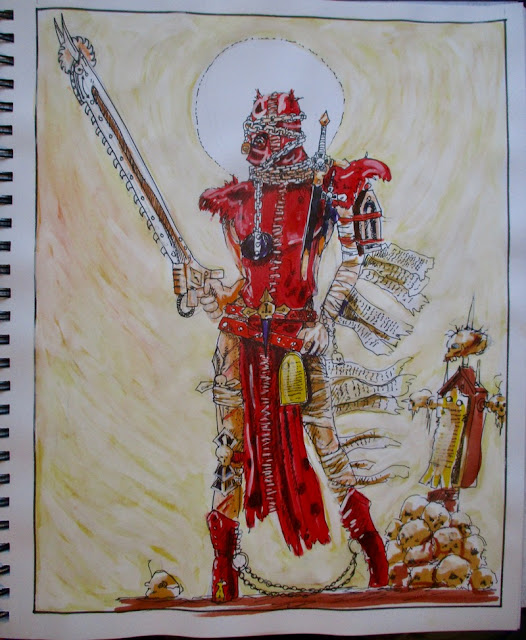 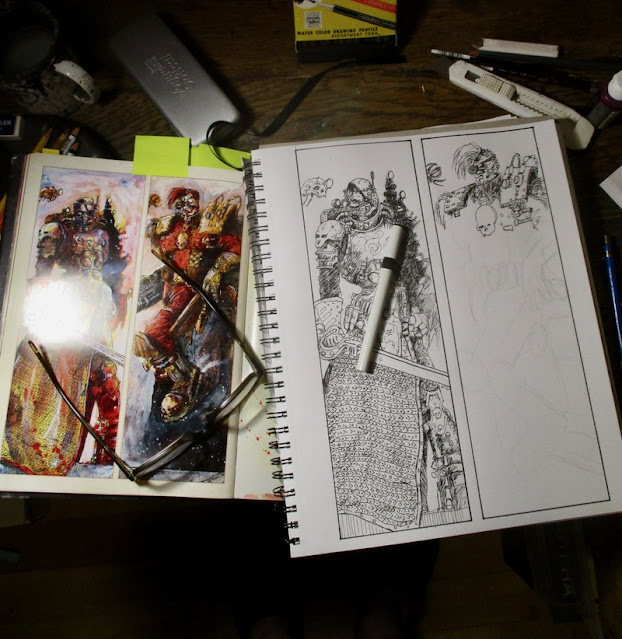 I started on this one on Thursday, but didn't quite get it done. 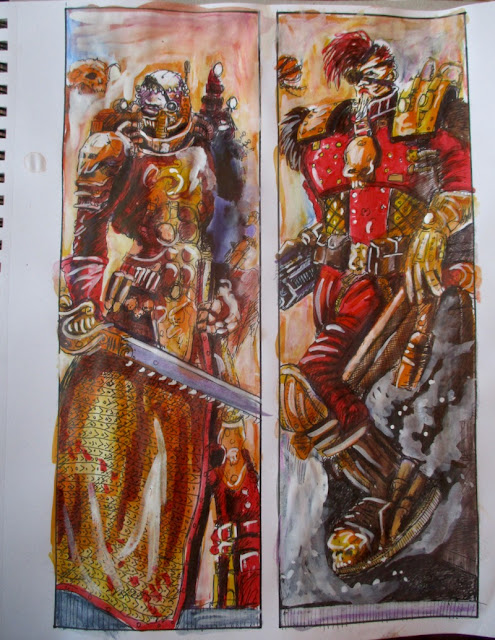 I finished it up on Friday... and HAD planned on doing another one... but then life happened some more and it just didn't work out. So I didn't end up doing a drawing a day - unless this diptych counts as two...? 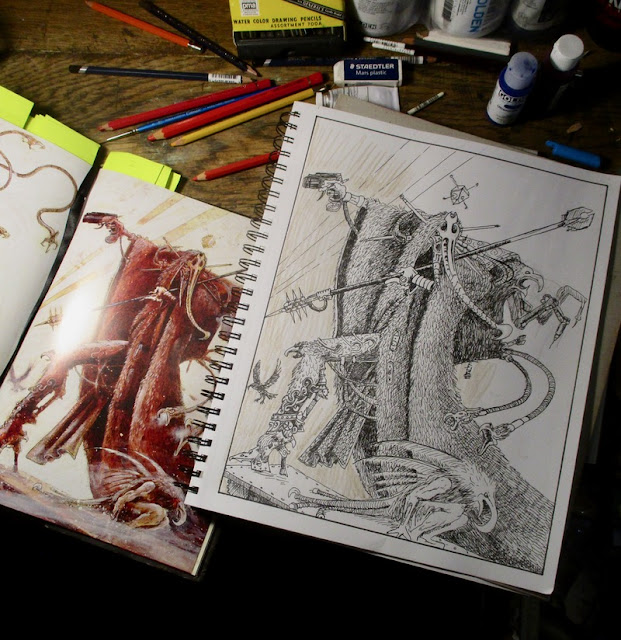 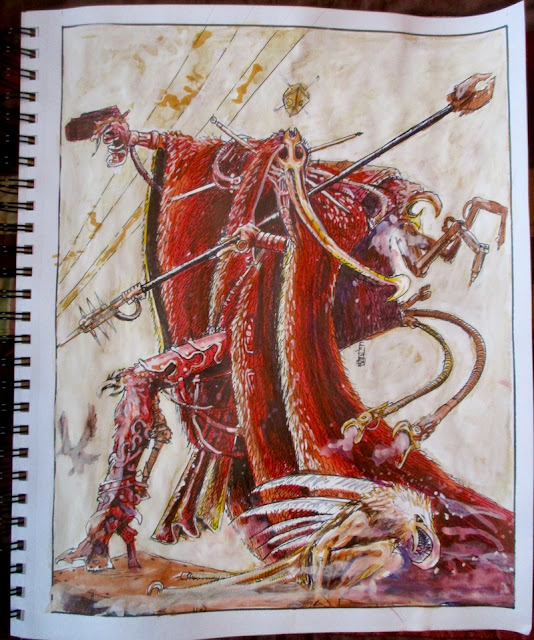 Sunday I had to head over to my folks to start helping them pack up as they're moving midway through October. 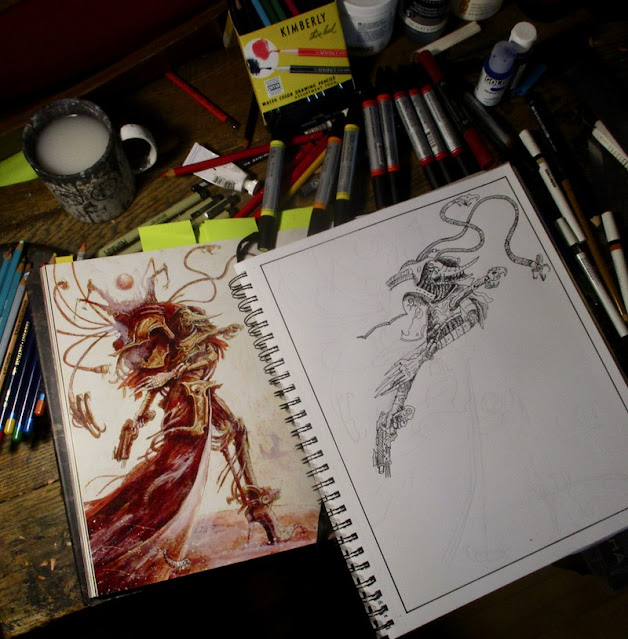 I did get started on my drawing before heading over there at noon. 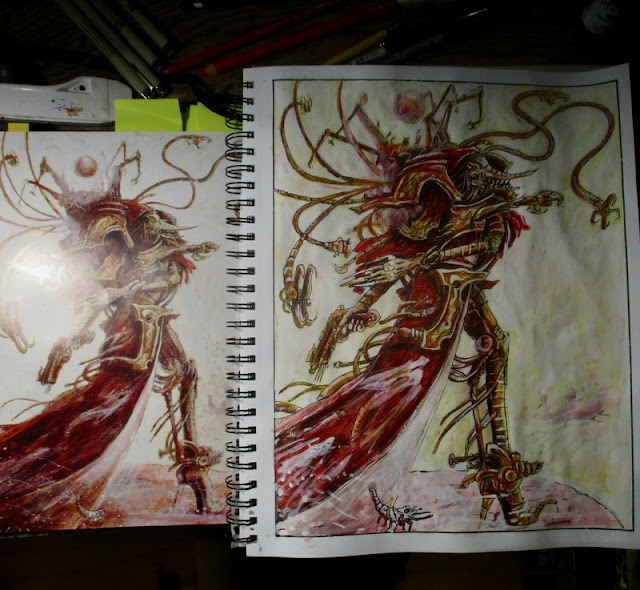 Finished things off in the evening after I got home. 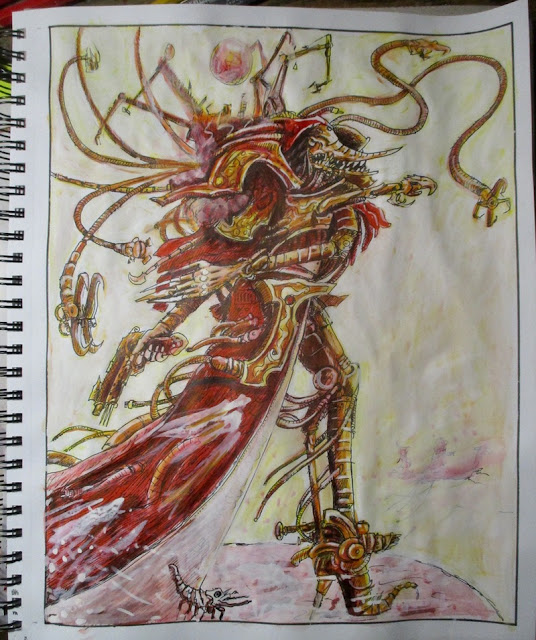 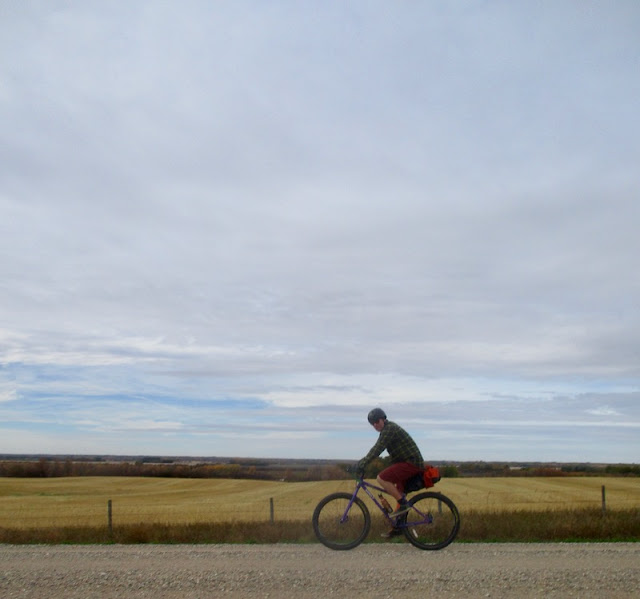 Got out for a ride on Monday. Like, a ride for FUN, not just to get some place... 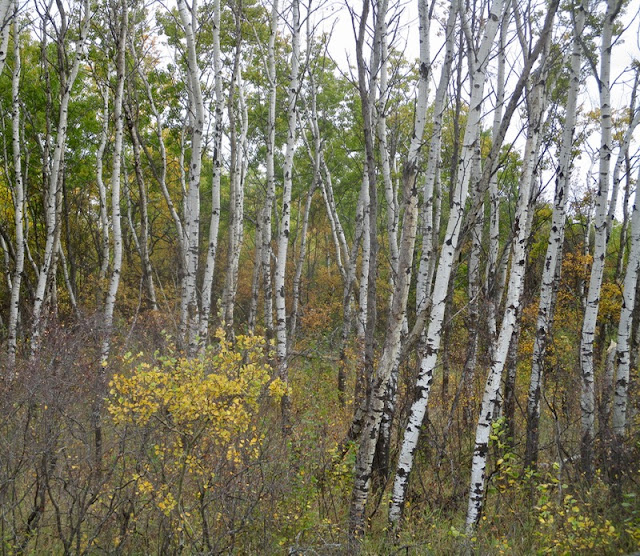 I took a LOT of photos - to many to slip into this post, and FAR to many to post on Instagram, so I dumped them all in a post over on the Bike Blog 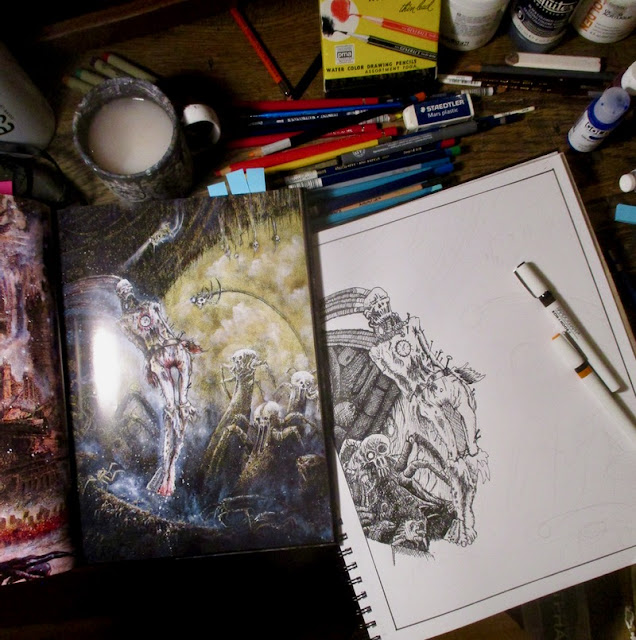 Despite plans to do something a bit more challenging - as I, in theory, had a pretty free day... I didn't get started on this until a bit later.... like, a LOT later... than I'd expected. 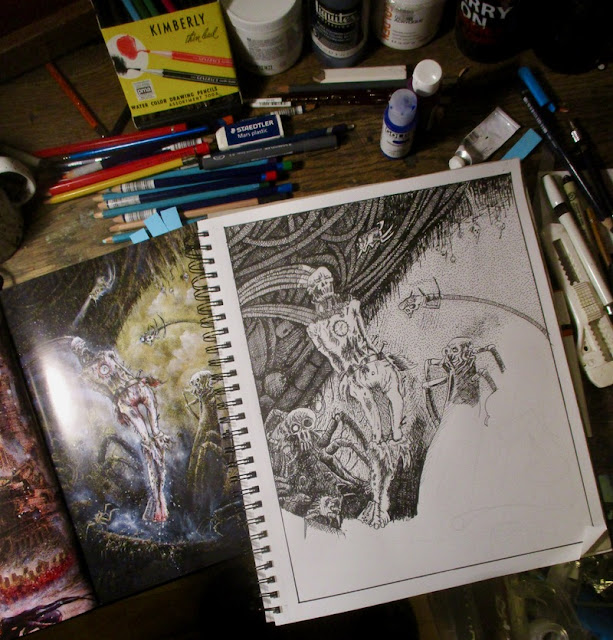 This is where I was at when Amanda called it a night and went off to bed. 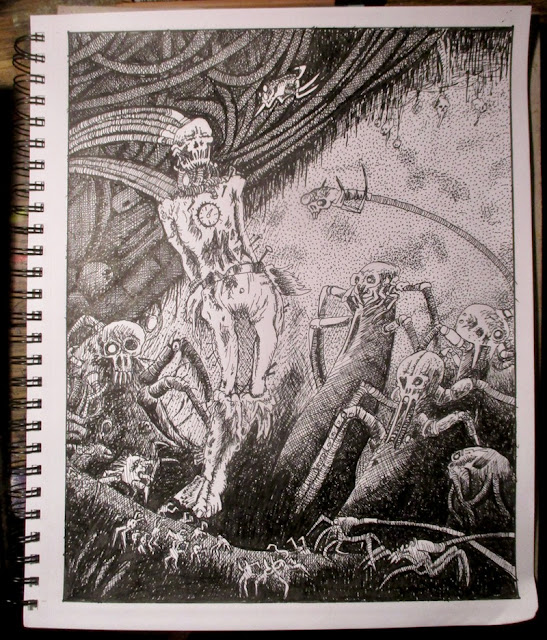 I got the inking done just before midnight and decided to call it a night myself.... 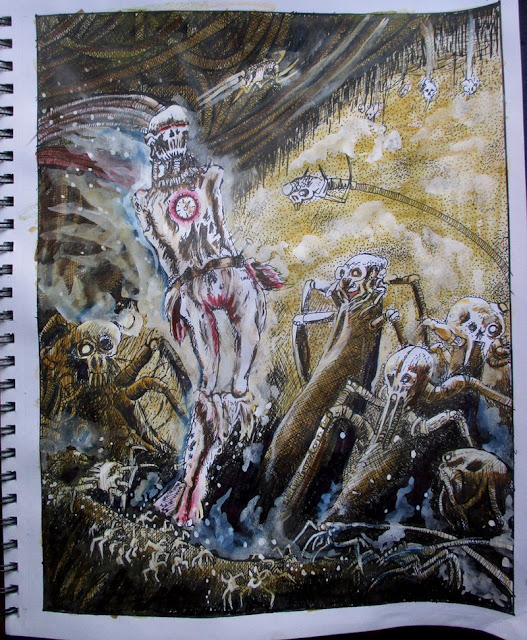 I coloured the previous days Tuesday morning. AFter all those miles and miles of cross-hatching and dot-points... I was a little hesitant to add any colour to this one - I was pretty certain anything else I did would just ruin it. In the end, I was pretty okay with how it all turned out. 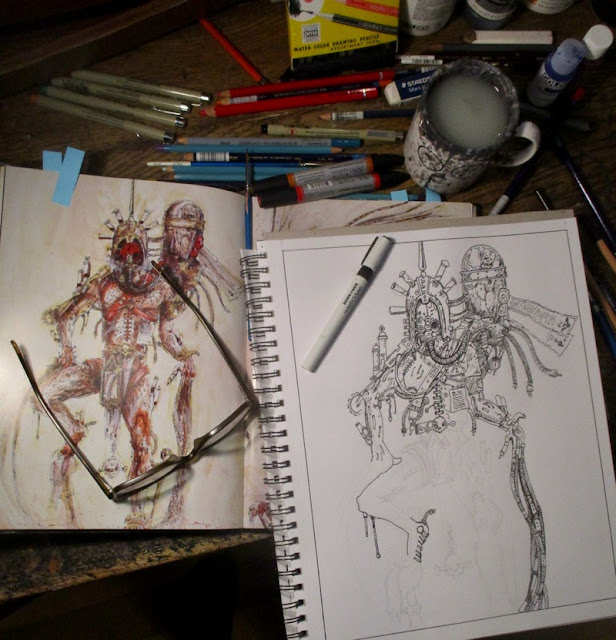 Earlier in the day, I'd king of given up on doing ANOTHER drawing - one just for today - but after working with the electrician for part of the afternoon, I found I had some time on my hands and decided to try knocking off another easier one... 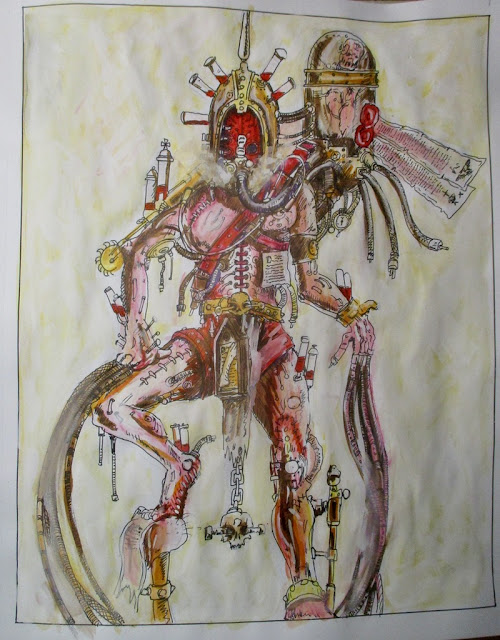 The colour was a bit rushed.... But, hey - I DID another drawing... and I had fun and did some different things with the drawing, so.,,. 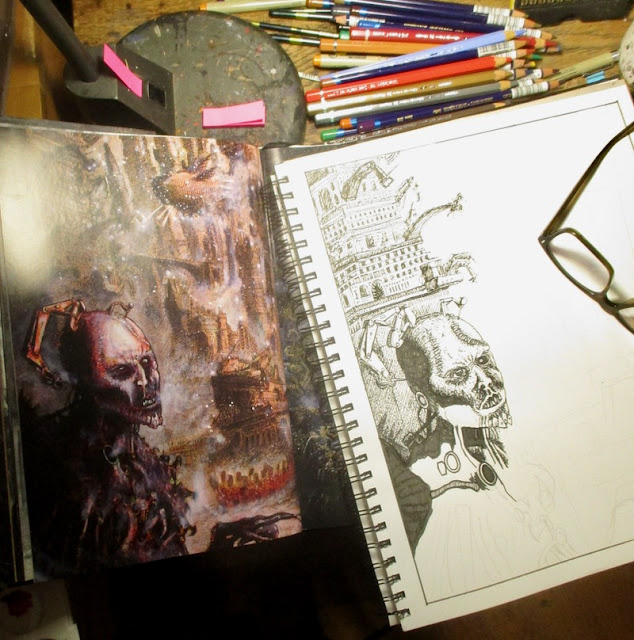 Helping parents get ready to move.

I'm going to go and watch some TV and I'll finish this one up tomorrow...

My plan had originally been, with the momentum started this month with the illustration-a-day challenge, to continue right on into October with Inktober - a similar challenge involving one drawing a day - in INK. I know a lot of people that have participated in this challenge in the past - and even tried a few times in the past (it's been going on since 2009).

Not sure if I should showcase them here....? Or actually make use of my old Art Blog (which I haven't posted of for over a year)...? Or just post them all on Instagram and Twitter....

In some respects this COULD be easier than this months challenge, as each of these illustrations I did this past month started off as INK drawings that I then added watercolour to. (Of course there is nothing that says I CAN'T do the same through Inktober! The only stipulation is that it's a drawing in ink).

so many October art/creative challenges!?

We'll see how I'm feeling in the morning.