These forces were mostly finished at one point… Then I re-based them (to multi-figure bases) first for "Great War Commander" (a variant of Blitzkrieg Commander/Cold War Commander) then later the DBA Extension for 1500 – 1900AD (which we extended further to 1920!)… then I re-based, and re-organized then all over again - back to single bases (though bigger ones than they'd originally been based on and organized into bigger units of fifteen. Why fifteen? Well because the rules I’ll most often use are a mash up based on Contemptible Little Armies and Ever Victorious Armies (and a few others too) and the units in there are between 8 and 18… and originally I’d had units of 13... but the current storage drawers I have fit ten of these guys across. Three rows is 30 – two units of fifteen. Ten seemed too small… 20 seems a bit big… so, Fifteen...

I have a number of forces for this era that (hopefully) will eventually be displayed here; Late War Canadians and Germans, East Africa (German and British), Turks, ANZACs, Early War British, French and Germans, Bolsheviks, and Chinese.... but first we begin with...

The Third Brigade is made up of a mix of Old Glory Figures, Wargames Foundry and my own homemade figures - in fact the highland infantryman used in the 15th and 16th Battalions was the first figure I ever modelled and cast!

The 4th Infantry Brigade is made up of figures from 1st Corps.

The remaining battalion of the 4th Brigade (21st battalions) shall be posted soon-ish.

I also have a selection of casualties from Gripping Beast/Woodbine Design that can be used as casualty or morale failure markers. They are painted with 5th Brigade insiginia, but will likely see use throughout the 2nd division.

The entire 7th Brigade is made up of figures from Great War Miniatures. 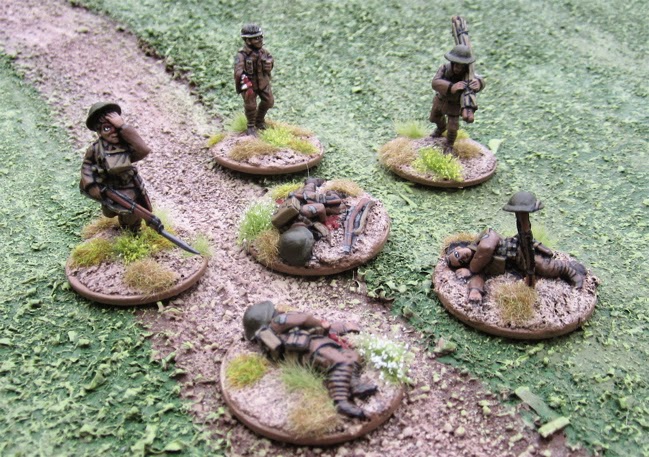 The 8th Infantry Brigade was part of the Canadian Expeditionary Force's 3rd Division in the Great War. It consisted of four battalions of "Mounted Rifles" which had been originally been raised in late 1914 as 8 regiments in two brigades. Upon their arrival overseas, however, it became immediately apparent that there would be no role for mounted rifles anytime soon and were thus "dismounted" and amalgamated into four regular infantry battalions.

The entire 8th Brigade is made up of figures from Renegade Miniatures.

Brigade Commander and HQ along with the 8th Trench Mortar Battery and the 8th company, 3rd Canadian Machine-Gun Battalion 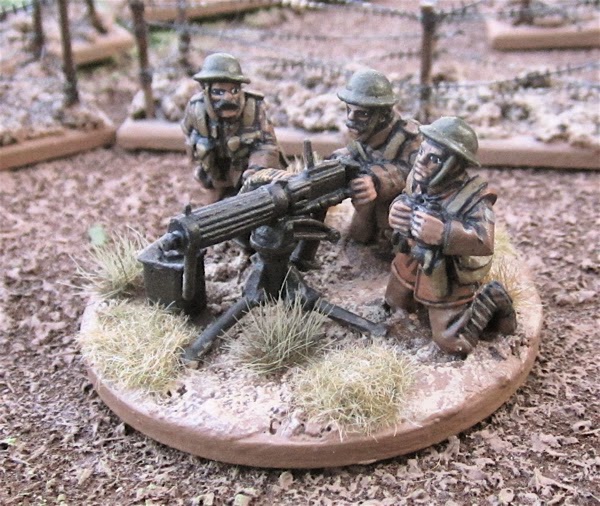 I have two Brigades of the Fourth finished - they are all homecast figures, I just need to get around to taking some pictures....

Took no part in the action at Vimy - they weren't even part of the Canadian Corps. But I thought I'd do them for giggles at some point. I have two regiments worth of figures from  Great War Miniatures I need to get painted at some point.

Also, obviously, took no part in the action at Vimy... But I'd like to put a force together using the figures from Tiger Miniatures. I have lots of Bolsheviks I could use them with in "What if" battles...

Most of the Germans I have were modelled, molded and cast by myself.

Gruppe Souchez occupied the line just North of Gruppe Vimy. Some of the Canadians assaulting Vimy  Ridge (and later "The Pimple") faced elements of the 16th Bavarian Reserve Division which were part of Gruppe Souchez. 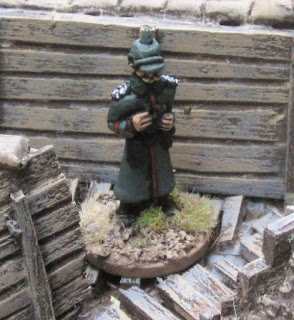 Regimental Command – currently a sigle staff officer (that I made myself) 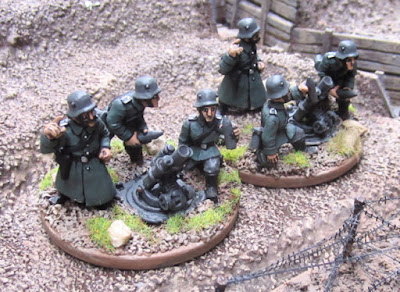 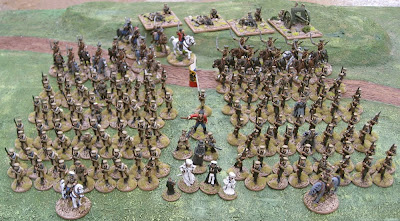 This is the whole force. Two regiments of four battalions, plus a few machine-gun detachments, supporting artillery and attached cavalry… 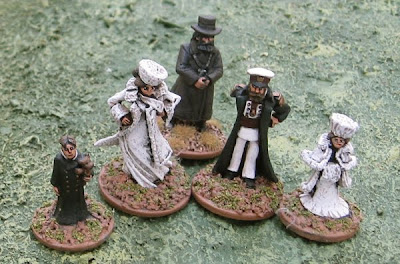 The Tsar and family (and an orthodox priest) 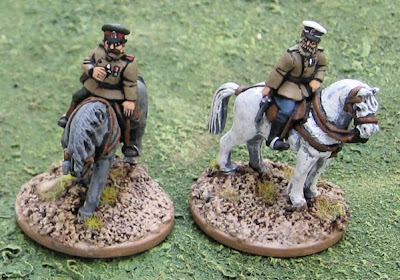 The two Regimental Commanders. I think these were both from West Wind as well – part of the old “Cowboy Wars” line, if you can believer that – I think the pack was called Russian Hunting Party #2… or something like that… 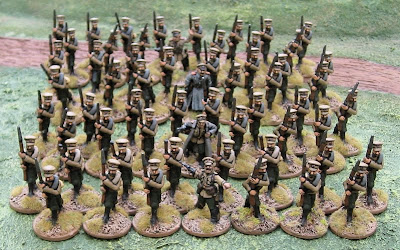 The Regiment is made up of four battalions of fifteen figures each. 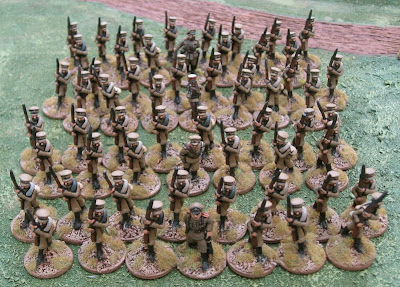 These are the officers of the battalions above. The four on the right are from Copplestone Castings. The next four are from the same Brigade Games pack as the Orthodox Priest above, and the last one is, I believe from Crusader Miniatures (stragely enough, once again, from a “Wild West” line – I think the pack was called “foreigners”!?) 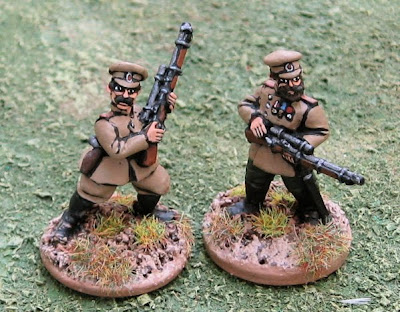 A pair of “Snipers” for more Pulp Adventurey games… These were form the same West Wind/Cowboys Wars pack as the Regimental Commanders. 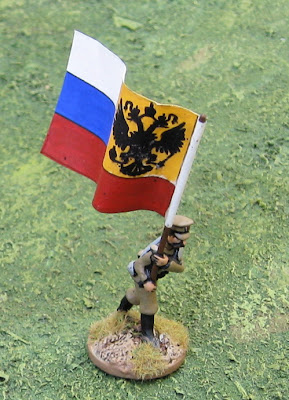 A standard bearer. Modified one of John’s castings. I have a second one with just the pole, if I ever get around to making a flag for it, each of the Regiments can have one - to follow their Regimental Commander around. For now This fellow will follow around whatever is acting as Brigade Commander…

The Machine-gun Detachments. The two on the outside are from Old Glory, and the one in the middle is from Coppelstone Castings.

I might like to get one more... That way I'd have a nice even two per regiment... maybe someday... 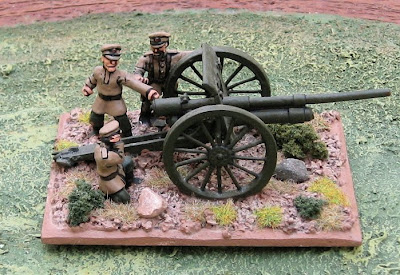 The Guns (one GUN, rather). I do have a second one to assemble and paint up some day… The model and crew are from Battle Honors.

The Cavalry. Could be fielded as two smaller forces of 8 or one big one of 16… painted up as Cossacks from two different hosts… don’t ask me which ones, I can’t remember… The men were modeled and cast (and painted, of course) by myself. The Horses were bought – Hinchifee, I think…? 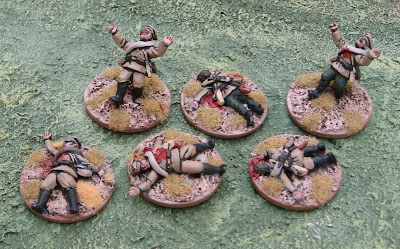 Some dead and dying Russians for morale failure tokens. These are from Old Glory. 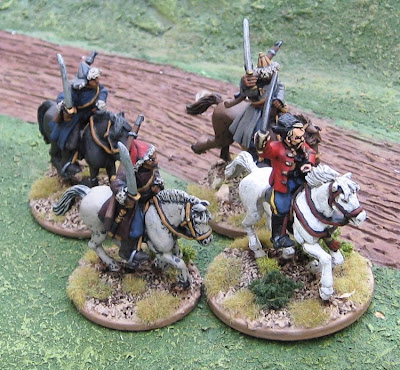 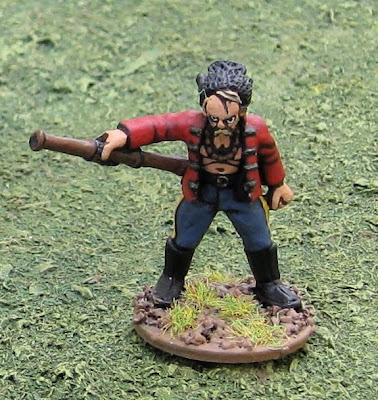 Ungern-Sternberg on foot. A frightful sight, is he not? (also from Coppelstone Castings)

I don't have a lot of stuff for this force.... and likely never will have....

Currently I have a batch of Carabiniers.  I’d like to pick up another 12 (at some point!) to fill out two units of 15. 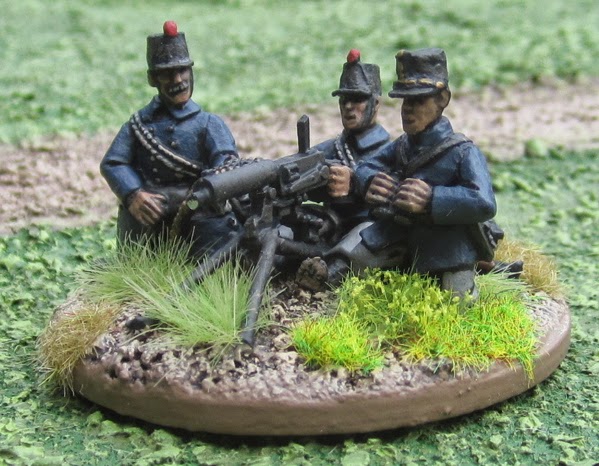 I do have a few more MG teams to paint up yet.

At some point I wouldn't mind adding a couple units of regular infantry and grenadiers, and perhaps some cavalry (or carabiniers cyclists - if Brigade Models ever does a mounted version!)

I also have a small (but largely unpainted, so far) force of French. Here's what I have painted so far...

I have a second cavalry unit of Dragoons from  Great War Miniatures  that needs to be painted.

One more unit of infantry still to paint. 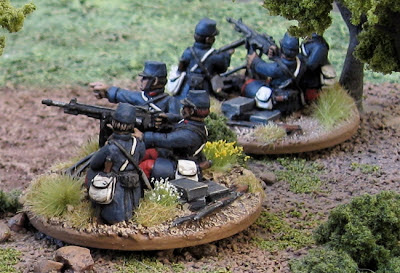 I need to pick up some guns for them!

In addition to a rather extensive force of later war (1917-ish) Germans I have a small force of 1914 Germans as well - mostly cavalry (so far...)

Finally, a unit of Jägers (also from Wargames Foundry).

At some point I'd like to pick up a "regiment" of three units ("batalions") of early war German infantry and a few guns and such to support them...

A small force of units from the BEF for the initial engagements of the Great War.

A unit of British Infantry - also from Renegade Miniatures.

I do also have some more 1914 British... at some point I'll get some pictures of them..

I have teh beginnings of a small force of ANZACs (mostly Australian Light Horse) for battling my Turks in the Middle East.

Australian Light Horsemen from Brigade Games. I have a second unit of these to paint at some point.

Dismounted Australian Light Horse (also from Brigade Games) - for fighting at Galipoli and such. I have another two units of these to paint up at some point... 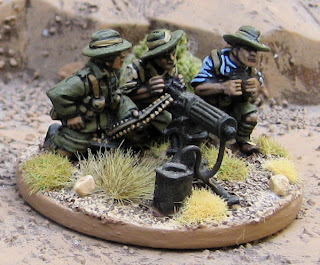 ALH Vickers team for a bit of support.

I don't have any great urge to get any more than what I already have to paint up. Largely because I don't have an awful lot of Turks for them to fight against...

And finally I have the beginnings of a very small force of Indians... 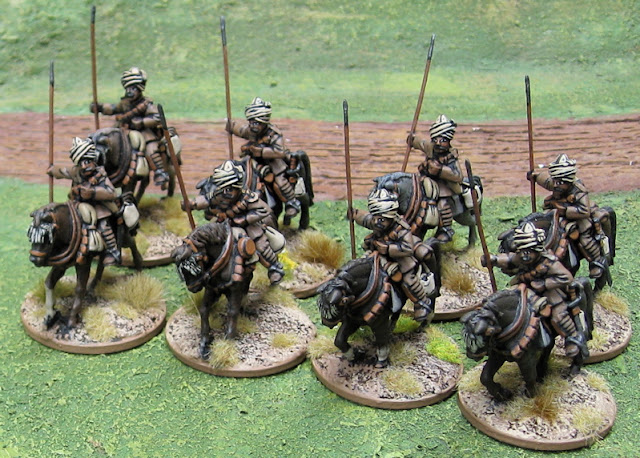 And that's pretty much it... I'd like to pick up some infantry and machine-gun teams at some point - and some more of these cavalrymen - but they're a pretty low priority at the moment.

Here are my German forces for East Africa (or Timbogo, should I ever decide to set some Great War battles in my fictional African nation!) The force is made up of figures from Copplestone Castings,  Wargames Foundry, Brigade Games, and a number of my own askaris.

Some of the troops (native bearers and tribal warriors) could easily be fielded on one side or the other, I suppose, but I've pictured them here to show how large the force COULD be.

At some point I'll post pictures of the individual units.