Well I never did get around to trying a couple more solo games of the last scenario and this week it was time to forge ahead into new ground – mostly because I watched Red Dawn again and had finished painting another T-72! Back to World War Three circa 1988 using Cold War Commander.

In the previous month or so the Russian Army has poured across the Bering Straight, rolled across Alaska and the Yukon and are forcing their way south through BC and Alberta.

The 2nd battalion Scotts Guards, which had been deployed at BATUS when the war began, were attached to a joint Can-Am-Brit Divison tasked with defending northern Alberta. In late August they found themselves holding a position north of the Peace river near the bridge at Dunvegan.

On the evening before this battle the 3rd Battalion, 51st Parachute Landing Regiment (106th Guards Airborne Divison) landed around Dunvegan to capture the bridge over the Peace River. At dawn they were dug in around the bridge with the artillery barrage that announced the assault by the 256th Motor Rifle Regiment.

FORCES
One thing that should be noted for those familiar with CWC is that the figure scale I use is one stand = one section of infantry or two vehicles or guns – so a full strength tank company would be about 5 tanks. Also because of this I allow IFVs to carry 2 sections and allow the sections within a save equal to the save value of the IFV (generally 6) – if the IFV/APC is taken out they may roll this save – if successful they deploy outside the vehicle and are suppressed with hits equal to the number of hits taken by the vehicle – it gives them a slim chance of surviving, otherwise if an IFV model is taken out it would wipe out over half a platoon worth of infantry…

This should really be the other way around – the larger force trying to break through to the smaller force of VDV trying to hold the bridge…. Unfortunately I just don’t have enough motor rifles troops or equipment right now… so…

Britton and Chris showed up tonight, Chris took the Scotts Guards and Britton took the VDV – leaving me with the Motor Rifles.

Overhead view from the east. To the left of the picture is the Peace River (impassible) and the bridge across it held by the VDV. In the middle are A and B Coy of the Scotts Guards. A Coy, at the bottom of the picture is to the east of Highway 2, B coy is opposite on the west side of the highway. 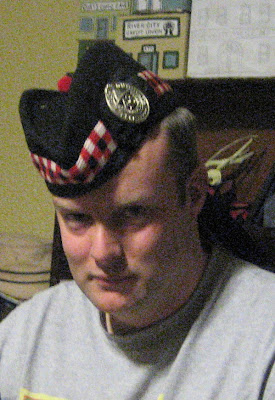 LCol Knudsen – a fine name for the commander of the Scotts Guards. 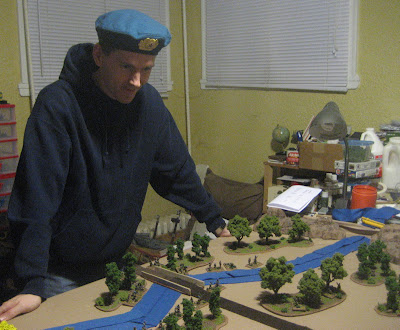 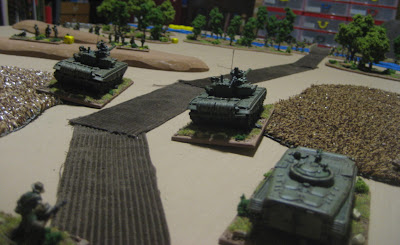 Soviet Armour rolls across pasture land towards the Peace River following their creeping barrage. (Dang I should have put out the KRUMP markers… ah well, next time).

The Waiting Scotsmen – one section is suppressed by the barrage! 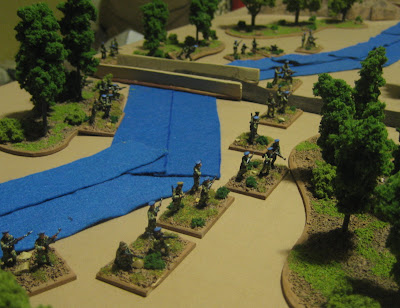 The VDV holding the bridge. 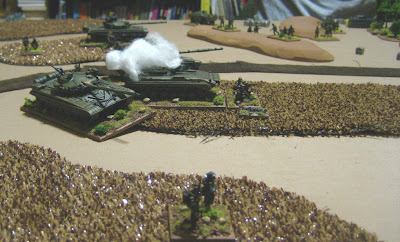 On turn one Chris started lighting up my armour with B Coy’s Carl Gustavs and Milan Section. First went the BMPs and one section with it… 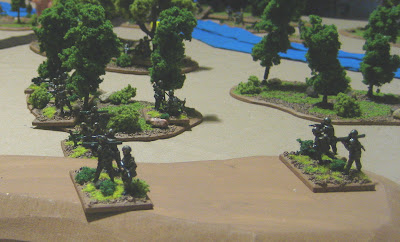 There is B Coy that menaced my advance. Surely the OC should get a DSO….

On Turn 3 Chris got two Command Bonuses – one right after another – that menaced my dismounted infantry.

Then, on Turn 4, he got an Artillery Support bonus which could have wiped out one of Brittons companies if he hadn’t followed it up with such crappy attack rolls – still he suppressed a number of units.

On Turn 5 My FAO rolled a command blunder – friendly fire – which suppressed (and very nearly destroyed!) the only unsuppressed unit I had left on the table!

On the bottom of Turn 5 Christian got another command bonus but for all the shooting that brought down on the VDV – he didn’t cause a single hit. He followed that up with a command blunder – his CO ordered a number of his units to pull back! 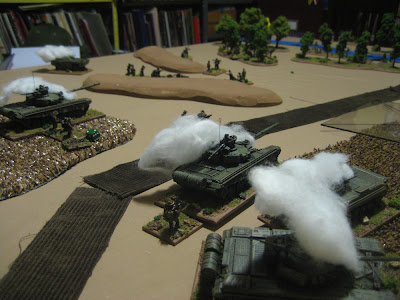 The smoking wreckage strewn about the fields of Northern Alberta.

The VDV had started to move out to try and winkle some of the Scotts out of their positions but just couldn’t get far enough, quick enough to help.

The Scotts had only lost one stand of infantry, I think the VDV were in the same boat (one infantry stand lost).

I don’t really know much about the terrain around Dunvegan – I imagine the river would actually be in a bit of a valley, which I didn’t really try to replicate on the battlefield.

I have no idea if there was a 256th Motor Rifle Regiment.

Looking back I should have split my force – put the T-72s and the BMP under the command of the CO and charged them up one side, deeking over to the bridge in the middle of the table only after I had gotten out of the open and into the wooded area. The dismounted infantry could have followed on behind them with the CHQ.

I’m pretty stoked now – my next project will have to be putting together some more BMPs and the BTR-50 to use as a CO!

We counted the Brits and the VDV as entrenched… they definitely should have just been “dug in” in shell scrapes… One of these days I’ll figure that out.

Next week… hard to say… depends what I get painted over the next week and maybe who tells me theyre’ coming and what they’d be interested in. Could be more World War Three action… could be back to the desert in 1942…
Posted by tim at 10:05 PM