Sometime ago, while organizing all the minis, I have I noted that, of all the Valhallans I had, I was two short to fully fill out the units I wished to have. So I've been keeping my eye out for some on eBay. But buying individual miniatures just doesn't make sense - often sellers that are selling them want a ridiculous amount and, once you add in the shipping, It almost seems like a better deal just to buy a whole squad... but then where would that put me? A couple guys short of what I need to field complete units!?

Luckily I noted that the Troll Trader had a single Valhallan with a flamer in stock AND it wasn't TOO unreasonably priced AND I was picking up a few other minis from them anyway... so I bought it. The second one Is just a Cadian sniper that I painted up to look like a Valhallan that I picked up in a pack of two, brand new, at Dragon's Den Games (my FLGS). The other will probably be painted as a Cadian to go with my small force of Cadians...

Why on earth did I paint up these two? Right now!?

Well... they just arrived. Usually when miniatures arrive I prep and assemble and base and prime them all before storing them away in their drawers until I get to painting them... and so I did that with these... and there was just the two of them... and it's been a while since I painted any Valhallans... so I painted them. Even though neither of the two different units they will be going in has so much as a dash of paint (though they are all prepped, assembled, based, and primed!). It seemed like a good idea at the time and it was a nice break from all the other stuff I'm flailing at. 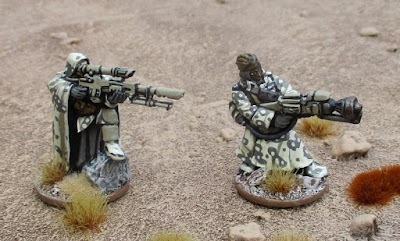 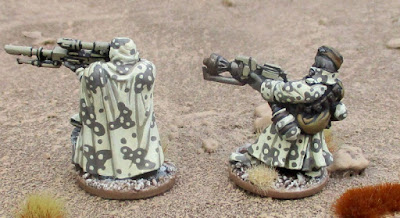 Both, theoretically are bound for Command Squads. It is possible they may see action in Kill Team as well... 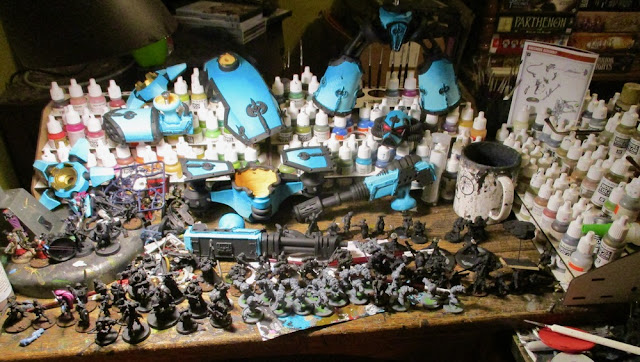 The painting desk is kind of overflowing with altogether TOO MANY THINGS that I am trying to paint all at once... This doesn't even show all the little boxes of STILL MORE STUFF that have been removed from the table, but kept perilously piled next to the desk on the floor and ledges and bookshelves within reach of the desk... It is in desperate need of to hobby triage and a good sorting out! On that desk, currently, is the Reaver Titan (in bits, all over) a Tallarn Mortar Squad, assorted Eldar, Necromunda Gangers, Ministorum priests and the assorted 40K characters, the last two strike Squads for my small Grey Knights force... Blackstone fortress figures... a pile of Vermyn I'm painting up for John to use as a Heretic Astartes Kill Team... Oh.. don't even get me going on what's in the precariously perched boxes just out of view...

What I SHOULD be working on is stuff for the upcoming Kill Team campaign weekend - a little less than four weeks away! This would include John's Vermyn and a bunch of terrain. What I'm MOSTLY working on (when not painting silly things like Valhallans!) is the Reaver Titan... Now it is a bit of a priority - as I need it for the Apocalypse events just a couple weeks AFTER the Kill Team weekend.

The Tallarn mortar Squad was a priority as it was my entry for this months painting contest for the Hunters of the Warp monthly painting challenge... AND I though I was going to need it for the Apocalypse event... but then when we decided to go ALL TITANS (and one Knight)... the motivation to complete then has gone right out the window.

We been getting in a few games over the last few weeks. We've knocked SIX games off our 10x10 family boardgame challenge, I've knocked one game off my own personal challenge list - and we've got in a couple other games totally unrelated to any challenges! This past weekend alone we played Sentinels of the Multiverse on Friday (a challenge game), Saturday afternoon The Girl and I went over to some new friends to try out Scythe, later in the evening one of the kid's friends came over to continue their Dungeon Crawl Classics campaign while Amanda and I went out to play the first session in a Call of Cthulhu game my friend Bruce is running (with SEVEN players), and on Sunday evening we played Power Grid Deluxe (another Challenge Game). We're planning to knock a few challenge games off the list this coming Friday and Sunday evenings (not sure which ones just yet) and I'm heading out to my friend John's annual game day: Freezerburn.

If I had to guess it'll probably be the Reaver Titan. Iv'e been working on some insignia I might add to all three.

AFTER that the main priority will be John's Space Rats... then some more terrain... yeah.. time to go clear the rest off the table (at least temporarily) so I can get FOCUSED!!!
Posted by tim at 1:17 PM