Wednesday evening I pedalled over to Robyn's house to play some 40K. I've been trying to get together and play a game of 40K or Kill Team with Robyn for ages, but things just haven't worked out. Well this week they finally did! We both brought out 1000-point forces to practice for the Battleforce Recon tournament we're both playing in this coming Sunday. Robyn played Grey Knights and I played my Asuryani (Craftworld Eldar).

We played Mission #2 - Cut Off the Head, from the tournament pack. Our commanders were were apparently gathering for a crucial tactical meeting when battle was joined.

Each player allocated 3 Intel Points, as evenly as possible, between the CHARACTERS in their army, and notes this down on their army roster. If your army has no CHARACTERS, 1 Intel Point would instead allocated to the Warlord. I had three characters so each got 1 Intel Point. Robyn only had one two - so one of them had two points, the other had one.

Crucial Intel:  At the end of the third battle round, and at the end of each battle round thereafter, each player adds up the number of Intel Points allocated to models from their army that are currently on the battlefield, or that are currently embarked within a TRANSPORT that is on the battlefield; this is the number of victory points that player scores.

Points were also awarded for slaying the enemy Warlord, First Strike (if any units from your opponent’s army were destroyed during the first battle round),  Linebreaker:  If, at the end of the battle, you has at least one model within the enemy’s deployment zone), and variable points for controlling other objectives based on "Rules of Engagement" cards drawn each turn...

The scenario ended after four rounds

Head Quarters
Grand Master (Bad-ass dude in Terminator armour)
Some Other Bad-Ass Dude in Terminator Armour (with a big freaking HAMMER!)
I totally don't remember who he was... I should have taken better notes...

I won the roll off, so picked a side and set up first and took the first turn. 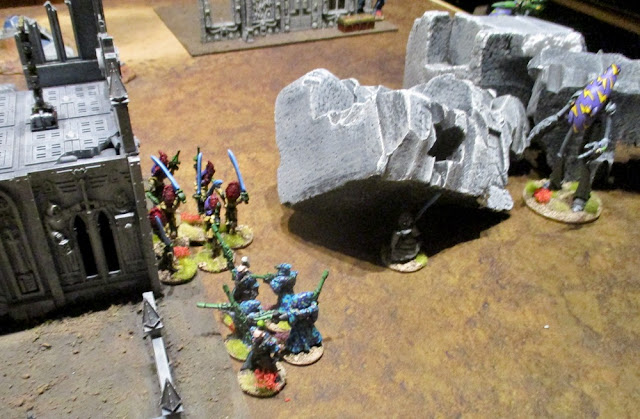 Banshees and Rangers moving up to seize the central Objective - not that they could control it, so they were moving up more to deny the enemy the ability to control it until one of the Warlocks moves up that COULD control it.

Well the banshees planned to move past this point and engage the enemy directly in close combat and this was a good place to hide behind some LOS blocking terrain. 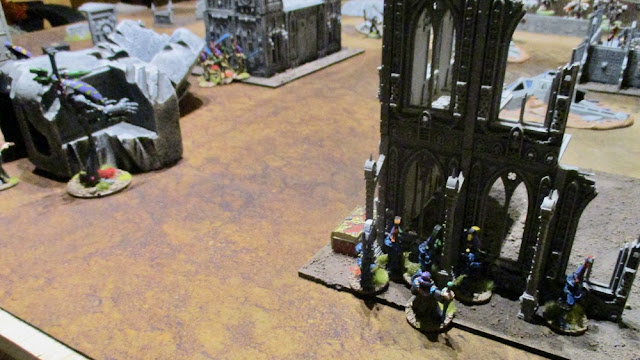 On the Aeldari right a squad of Dire Avengers took up residence in the hard cover of a ruined building, right next to one of their own objective markers. 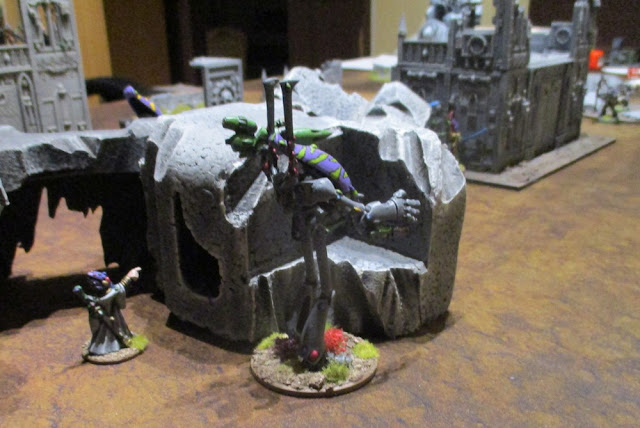 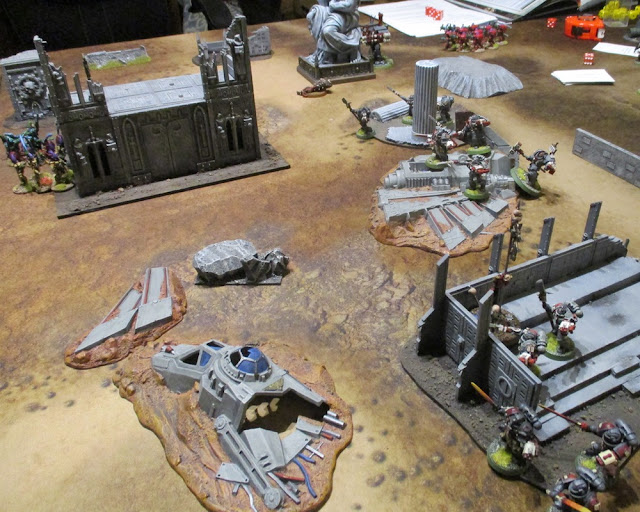 On my first round of shooting two of the wraith lords fired on two of the strike squads and caused a few casualties. I think one of the Ranger Squads had line of sight on one of them and may have caused another casualty...

If I were a smart player I probably would have remembered the FIRST BLOOD victory point and tried to concentrate fire on ONE UNIT, in hopes of taking it out on the first turn...

ROUND ONE - Grey Knights 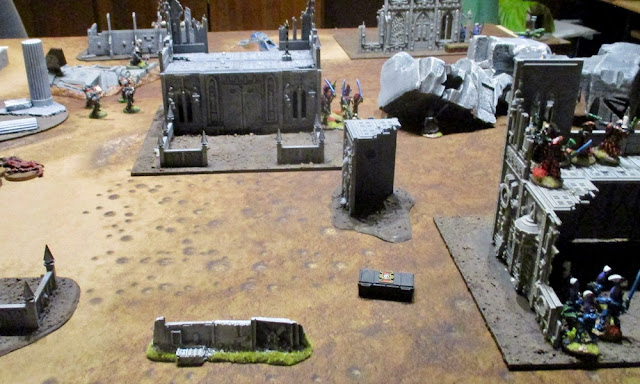 The Grey Knights brought some heavy fire down on the Dire Avengers on the right - taking all but the Exarch out of action! He passed his morale check and survived there in cover until the very last round of the game!

I think they might have scored a Victory Point (or two?) for holding their own objective or having more of their own units in their deployment zone...? (from their Rules of Engagement card) 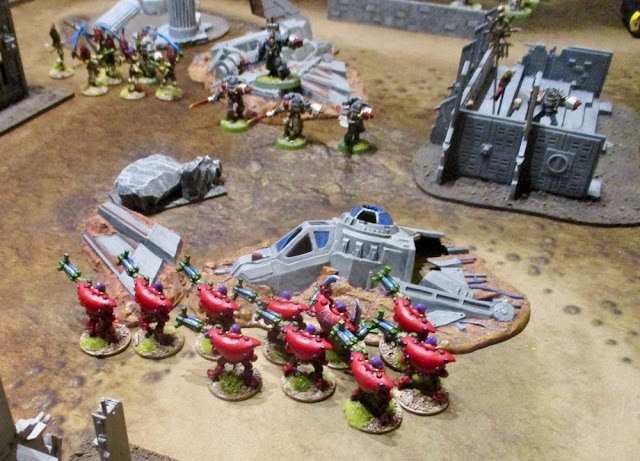 My Warp Spider appeared out of the immaterial and shredded a Strike Squad - only one survived - but, like the lone Dire Avenger, survived until the end... 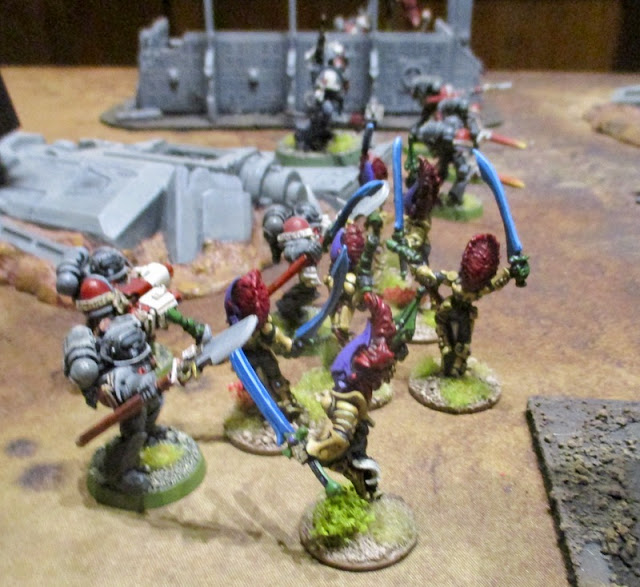 the Banshees charged one of the Strike Squads (or the remains of one that had already lost two to fire) and totally finished them off. I was close enough that I could have consolidated into another Strike Squad and the Other Bad-Ass Dude in Terminator Armour (with the Big Freaking HAMMER) .. but I wasn't sure if they would get to fight in this fight phase if I did so, and if they did, they would have probably brought down a world of hurt... mind you, by NOT consolidating into them, they's all get to shoot the Banshees on their next turn THEN charge any that were left and bring down a world of hurt...

Once again, I got no victory points because the Rules of Engagement card I drew gave me 2VP if I controlled both ENEMY objectives... but I did get one point for having a character (with an intel point) holding the objective! 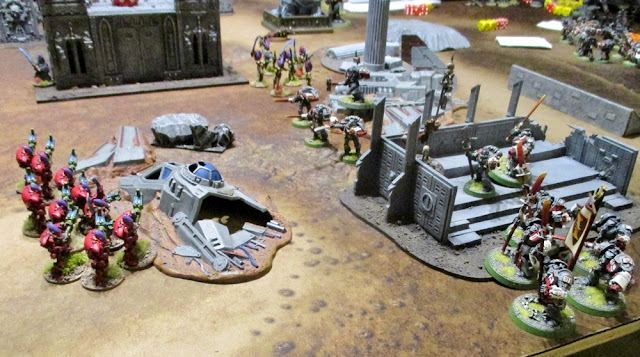 On round two the Grey Knights brought in the Terminator Squad from their Teleporarium. They shot the crap out of the Warp Spiders - only the Exarch and two others were standing when the dust settled. (I used 2 Command Points to endure they stayed on the table at the end of the round).

The Howling Banshees were also pretty badly shot up, and the Other Bad-Ass Dude in Terminator Armour (with the Big Freaking HAMMER) and the remains of a Strike Squad charged the banshees and finished them off...

I think they might have scored another Victory Point (or two?) for holding their own objective or having more of their own units in their deployment zone...? (again, from their Rules of Engagement card) 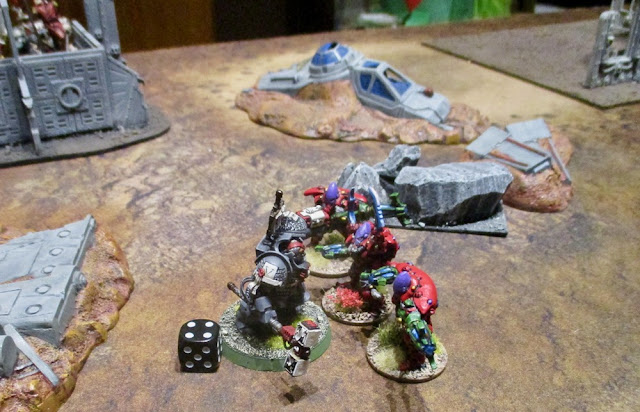 My Warp Spider moved AWAY from the terminators and finished off the second strike Squad with their Death Spinners then charged the Other Bad-Ass Dude in Terminator Armour (with the Big Freaking HAMMER)... this was probably a mistake... they all died.

This round I scored one victory point for having my Warlock near the central objective marker, and three more for having three characters with Intel points still on the table. I might have scored a point for holding one of my own objectives...? 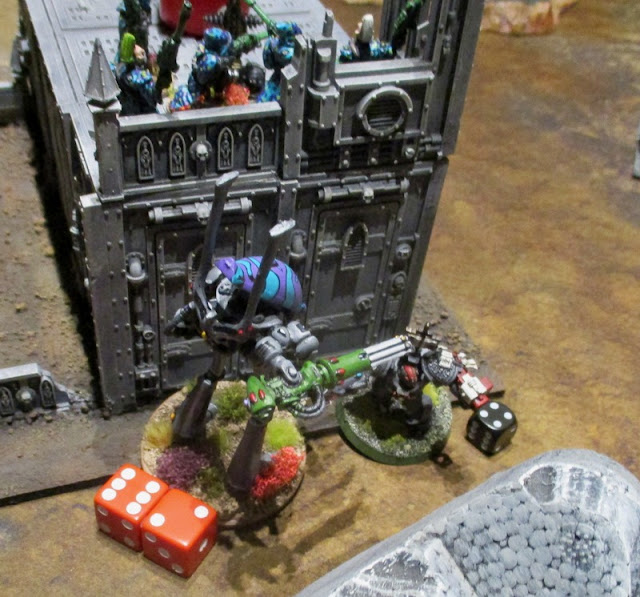 The Terminators started advancing towards my solitary Dire Avenger Exarch and Warlock - they poured fire down on him, but somehow he survived.

The Grey Knights scored four victory points for having three intel points worth of characters still on the table, and controlling the central objective marker. There may have been points from Rules of Engagement cards..? Or not...? 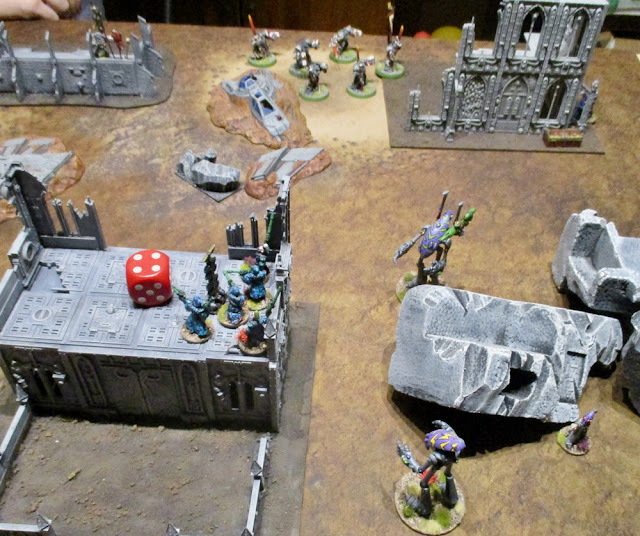 fire from both units of Rangers and one of the Wraithlords finished off the Other Bad-Ass Dude in Terminator Armour (with the Big Freaking HAMMER) - despite him having a 2+ invulnerable save and at least 4 wounds left! (6s to wound with Ranger Long Rifles will do that - Mortal Wounds FTW!)

I got two points for having two characters on the table with intel points and may have gotten a point for my Rules of Engagement card... I ended the game with 9 victory points. 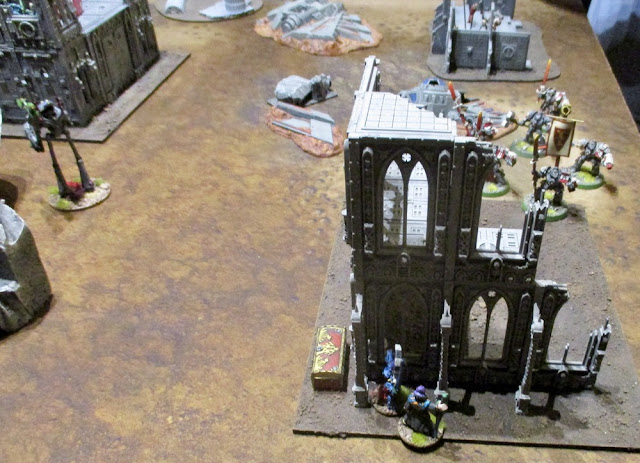 The Terminators continued to bring fire down on the Dire Avenger exarch.. and.. I think he may have finally gone down...? 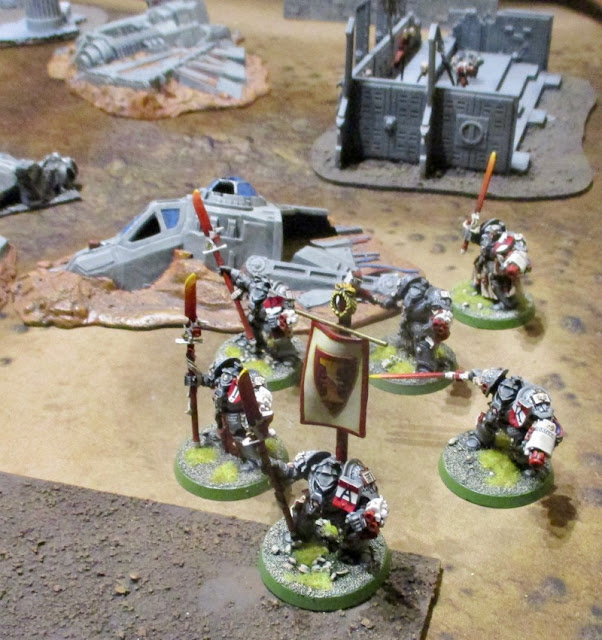 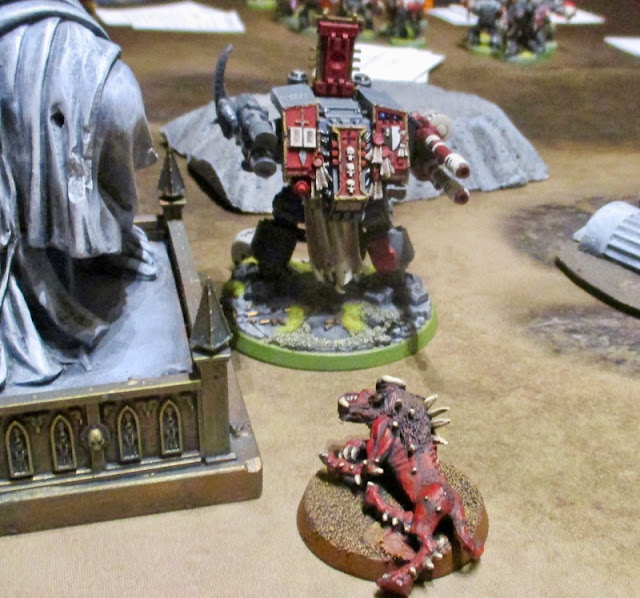 Grey Knight Venerable Dreadnought snuck out from cover to control an objective on the last turn. I think I did two wounds to it during the game - they may have been lucky shots from Rangers...?

At the end of the game Robyn had 11 victory points and I had 9. I have to admit, I don't love these Maelstrom of War-type scenarios with the card drawing to determine what objectives you have to hold EACH TURN to score victory points for THAT TURN?! It just seems so random. Regardless, it was a SUPER FUN game, though - so glad I finally got in a game with Robyn. Hopefully we'll get some more gaming in over the summer!

In all I think I lost 7 Dire Avengers, a warlock (or two?), the Banshees and Warp Spiders, and a Wraithlord. The Grey Knights lost the Other Bad-Ass Dude in Terminator Armour (with the Big Freaking HAMMER), and all but one of their Strike Squad members (14).

I definitely need to make a "cheat sheet" with the stats for all my units and weapons for the weekend (I spent waaaaay too much time looking up things I would have thought I would have remembered... but couldn't). I also need to go over the Stratagems available - as I really only used the basic ones (Command re-rolls, Insane Bravery, and I would have used the one to let your troops fight next if any of the Banshees had survived the Other Bad-Ass Dude in Terminator Armour (with the Big Freaking HAMMER)'s attacks... I was also thinking I could make some counters to put on the table to remind myself which psychic effects are in play..?

My own Grey Knights...? I did start painting the last eleven of them the other night...

I'd really, REALLY like to get in another practice game (maybe against Finnegan's Orks?) but I'm not sure if I'll get to do that... (if I did, there'd be a report of it). If not, there will certainly be a report of the action on Sunday! Stay tuned!
Posted by tim at 12:45 AM