These are a few more Legend of the Five Rings/Clan War figures I finished up over the last week. I’ve ben doing more prepping and priming than anything else this week. It’s not really because I’m in on Curt’s  Fourth Annual Analogue Hobbies Painting Challenge and it starts in one week. Usually whenever I get new miniatures I base and prime them right away and store them away in the drawer that they will forever be stored in. Partly to ensure that I have enough space for them, but mostly so they’re ready to go whenever the urge strikes to get some paint on them. If they’re to be skirimish figures they go on a round washer, if they are to be used for a big battle game or are part of a crew or team that requires they be on a multi-figure base, I will put them on a temporary painting base. The exception to this rule has been when the models require a fair bit of assembly (beyond just sticking to base) or manufacturing of bits (like spears). Or possibly if I’m not entirely sure if I’m going to use them for Skirmish or Big Battle games.

The L5R/Clan War minis are a bit of Column “A” and a bit of Column “B”. A lot of them do require at least a bit of assembly, and more than a few require some tedious, fiddly-bit assembly. This, coupled with the fact that I bought a whole lot of them all at once AND the fact that I originally intended to use some of them for skirmishing/role-playing and some of them for building armies for a Hordes of the Things Clan War campaign… I just never really got around to assembling/basing/priming them. 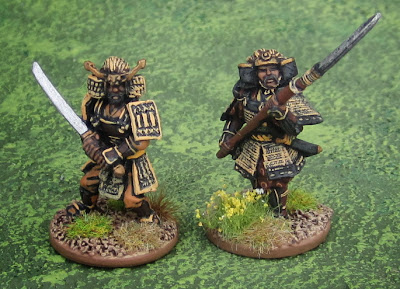 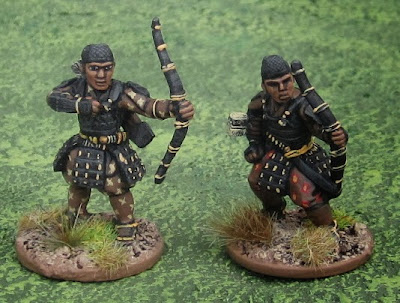 Two Lion Clan Ashigaru, also from AEG. I think I have enough of these that I could do four for each of the major clans. Originally I may have intended to use these for HotT bases, but if/when I ever get around to finishing those armies I can fill out the ranks with cheaper minis from Old Glory. 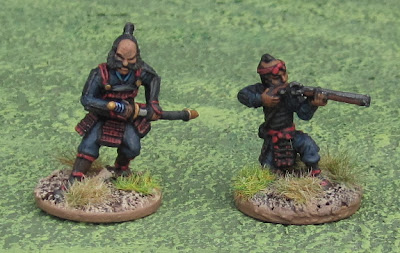 Two Bushi from the Crab Clan. The fello on the left is another AEG Clan War figure, but the one on the right is an old Grenadier Miniatures figure that I just painted in Crab Clan colours. I don’t think there are actually any gunpowder weapons in Legends of the Five Rings, but I figured if there were any clan that would make use of them, it would be Crab.

I have a few more teppo (arquebus) armed Ashigaru on the way from Perry Miniatures so I can add one or two to each other clans as an option for the 10th Annual Wargaming Birthday Bash/Winter Wargaming Weekend Ronin – Skirmish Wargames in the Age of the Samurai campaign.

My plan is to, over the next two months, put together about a dozen buntai for the 10th Annual Wargaming Birthday Bash/Winter Wargaming Weekend Ronin – Skirmish Wargames in the Age of the Samurai campaign. There will be six or seven Bushi Buntai based on the L5R clans (Lion, Crane, Phoenix, Dragon, Crab, Scorpion, Unicorn. I’m not so sure about Unicorn… they seem more Mongel-like and fight mostly on horseback… Also I was originally going to represent the Crane as a Koryu Buntai of the Kakita Academy, but after last week’s game I realized the Koryu would be a terrible Buntai to play. It’s pretty much no different from the Bushi Buntai, except the Koryu can’t have any armour or missile weapns – two very debilitating factors – so I’ve decided to represent the Crane as Bushi but they would be allowed to field some of their samurai unarmoured. There will also be two Monk Buntai (one made of minis from Perry Miniatures, the other made of minis from The Assault Group). There will be an Ikko-Ikki Buntai (mostly Perry Miniatures). There will also hopefully be a Bandit Buntai or two and maybe a Peasant Buntai (with lots of added Ronin – think “Seven Samurai”) - both will be made up of minis from a variety of manufacturers.

Hopefully another Ronin game report or two…? some more minis for Ronin…?
Posted by tim at 10:18 AM