The Ever Expanding Arsenal of Aggression

I finished up the third and final company of my Soviet VDV (Parachute) battalion for Cold War Commander. The three companies each have 8 infantry section-stands plus a headquarters stand. At full strength I would like to have nine stands but there just wasn’t enough figures in the Mars boxes (it’s funny, the box in the picture on the link there says 40 pieces, on the box that I have it says 36 pieces, in the actual box there was only 30….?). I had originally gotten 9 stands out of each box – but that was because I was just sticking the figures with the SA-7 on the regular infantry stands – I have since taken them off and made Antiaircraft Artillery (SA-7) stands with them. I guess I’ll just have to buy another box. Or two…

The ATGWs also come from Mars Figures – a different box set called Russian heavy Weapons Teams. Unfortunately there’s only two in the box (as well as two HMGs, two Recoilless rifles – destined for use in African armies – and two other devices I can’t for the life of me figure out what the hell they are…. Anybody have any idea what the thing in the middle is supposed to be?)

Anyway, here are some pics (Remember: click on the pictures for a bigger version) :

There they are, ready for inspection and ready to be dropped anywhere in the world at a moments notice – along with the rest of their division!

Now I just need to pick up a couple of BMDs….

In the last couple days I also finished up a couple of stands of stuff for my Vietnam games:

Some VC Scouts – to differentiate them from the regular VC I stuck some static grass on the figures to try and make them look all camouflaged and stuff…. These are from Rafm 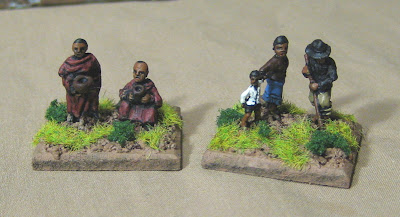 A couple more stands of civilians. These are Platoon 20 that were at one point produced under license by Rafm
Posted by tim at 11:31 AM