The family has all been sick this last week. Spent a lot of time just lying in bed, coughing… Still, I managed to get a few things done… Most of the hobby time this week was just prepping, basing and priming all the new toys from Black Tree Design (I like to do that – whenever new toys arrive – prep, base, prime and goop bases the lot of  them – so they’re all ready to just paint whenever the mood strikes) 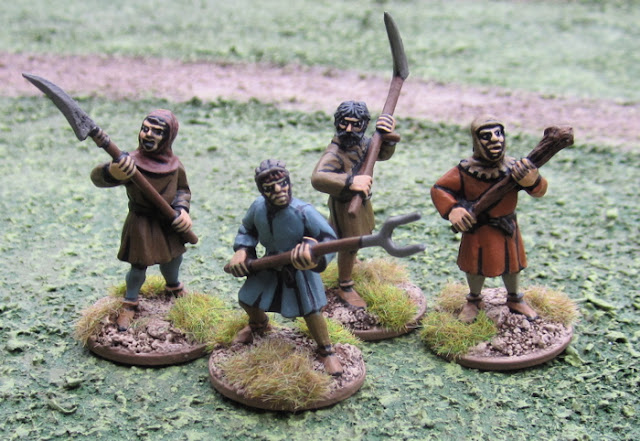 Four peasants from Black Tree Design that are replacing members of a existing unit of peasants for Lion Rampant (or Dragon Rampant). The four that are being replaced are four of the guys with daggers and swords which are going to be seeing sevice as thugs and thieves in Frostgrave warbands… I know, I know… I could have just used the old figures as both peasants in Lion Rampant and thugs/thieves in Frostgrave… but I like having dedicated figures for specific units/games. To tell the truth, when I ordered the extra peasants (because I have another 12 BTD figures for a complete second unit of peasants for Lion Rampant yet to paint…) I was under the impression that the unit wasn’t complete for some reason… I didn’t order them specifically to replace existing members, it just sort of worked out that way…

The entire unit – a mix of BTD and Crusader Miniatures and a dude with a sickle that came from I-don’t-know-where. Some of the Crusader figures might get mixed and matched in with the second unit of peasants when I get to painting them… 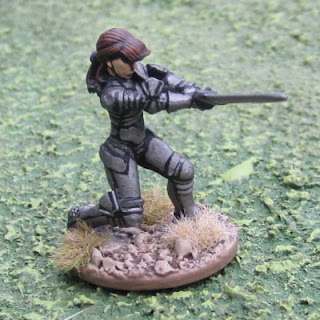 A “Templar” for Frostgrave from Hasslefree Miniatures. 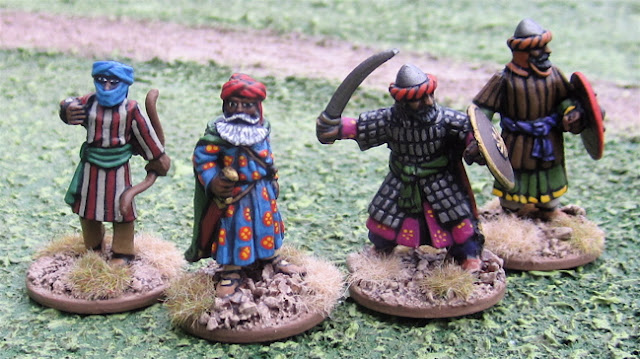 The beginnings of what may turn out to be two or three Frostgrave Warbands made up of more “Eastern” characters.

On the left is an Archer I got in a trade from Bob in Edmonton a few years back and can’t remember the manufacturer (I know Bob got them to review for some magazine…?) I got a dozen of these and some Sea Peoples from the same manufacturer. Next to him is a character (from Mega Miniatures) I originally imagined as a Wizard, but I’m thinking could also be used as a wizened old Captain (looks like skin and bones but actually tight as a bow string, fast as a whip and deadlier than could be imagined - age and treachery and all that...). Finally, on the right, are two from Black Tree Design one will see action as a Knight (sword, shield, mail) the other as a Man-at-Arms (sword, shield, “leather” armour). 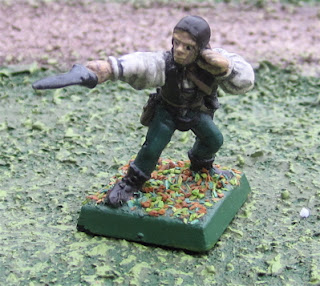 This isn't a newly painted figure. This is actually one of the oldest figures I have that still has it’s original paint job… I thought I’d take a picture as I’m finally going to strip of that paint and redo him – he’s perfect for a Frostgrave thief. Stay tuned for that...