Sergeant Hammer was released after only a few cycles in the medicae facility at the expansive
Haldivar Starport. He had required some serious bone refabrication and muscle stitching and rebuilding, but didn't require any organ regrowth. "Peachy" McGough and Loiselle were kept in quarantine and not allowed to return with him - as they had potentially been exposed to some unknown xenos parasites.

It was Hammer's intention to muster the section and anyone else he could and much back out into the jungle to hunt down the vile Xenos that had killed "Doc" Sanders and grievously wounded himself and others. In a debriefing at the Squadron HQ he had leaned the creatures they encountered were the hated "Tyranids". It was imperative to gather as much intelligence as possible about the numbers and dispositions of the terrible xenos threat - to determine the extent of the infestation and where best to direct orbital bombardment.

However, upon return to the Troop's Forward Operation Base, he found a situation with a more dire need of resolution! The rations had not been making it through from Haldivar Starport. Apparently parts of it had been overrun by Ork Raiders. So instead of hunting the vile xenos Hammer was tasked with taking his team out to forage for anything edible in the wretched, dangerous jungle that surrounded them.... 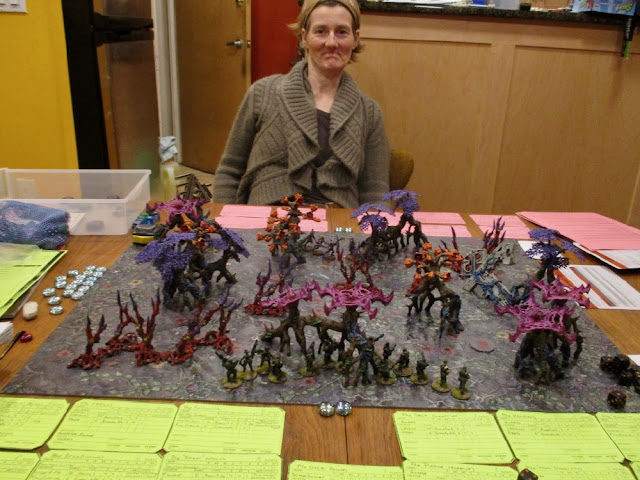 On Monday evening Amanda was feeling a bit tired so we played hooky from our ballroom dance class and played a little Kill Team instead...

We played the Fearless Foraging scenario from the Death World Kill Zone Box. Essentially there were five objective markers. At the end of each turn the side controlling each rolled on a table... you either got bitten by something (One mortal wound) or found nothing or found something useful (+1 Command point or +1-3 Victory Points)

The Kill Zone Special Rule we rolled for in this game was "Aggressive Fauna" - same as I had for my game against Bruce. 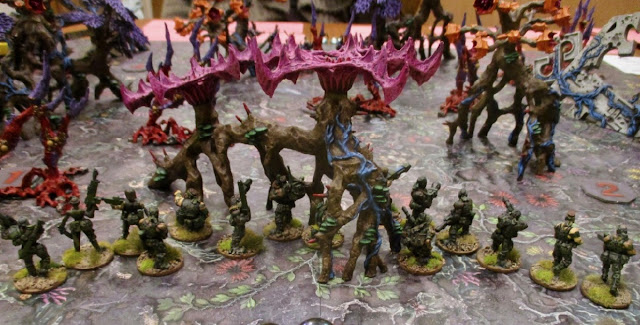 Deployment was in a triangle shape centred on the long edges with objective markers in the centre and four others halfway between centre and the corners.

The team was beginning to get used to moving in the jungle - knew what flora and fauna to look out for - ones that could be eaten, others to be avoided at all costs!

It was a bit of a shock yet ANOTHER Xenos race prowling around in their Area of Operations!

When Cpl. Hunt, the team's scout, first spotted them he thought they might be another patrol, but there were no others in the A.O. He thought for a moment it might be locals - or perhaps the Archenemy - which was said to have corrupted the insurgents... but then he saw them move - Lithe and darting and inhumanly fast... He knew it must be another Xenos race entirely - perhaps the dreaded Aeldari! 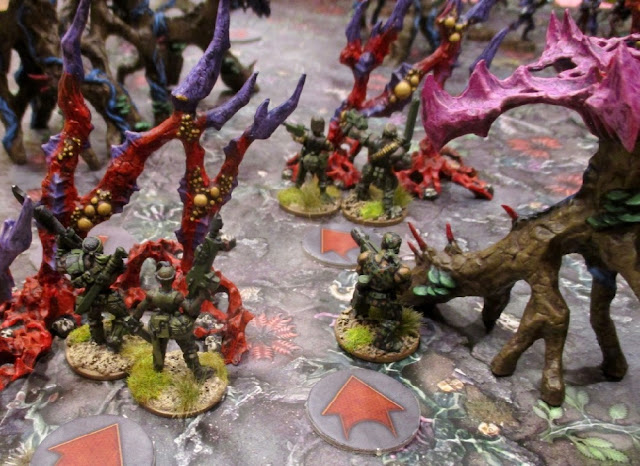 Hammer quietly whispered his orders to the others: "Broad, you and O'Rielly stay here, cover us and  and snipe at targets of opportunity. Quincy and Morse, you secure that bush with the big purple fruits, try to grab a few if you can in case we have to bug out. Taylor and Farnsworth, you're with me, we're heading left, The rest of you are with Corporal Jules. Dane and Pierce, look for more edibles, while the rest of you cover them and keep those wretched xenos filth at bay!" 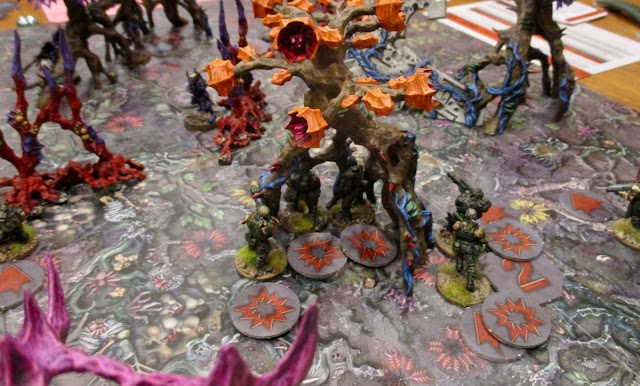 Cpl. Jules flanked right with Dane, Pierce, and all the others. There was movement to their front so they lit up the jungle with Flame, plasma and lasgun fire. The Xenos were fast moving and hard to get a fix on in the dense jungle. Hawkins was sure he hit one of them, and saw her go down...

(It was Vulvatrix, Hakatrix of the Crimson Wave, their leader....) 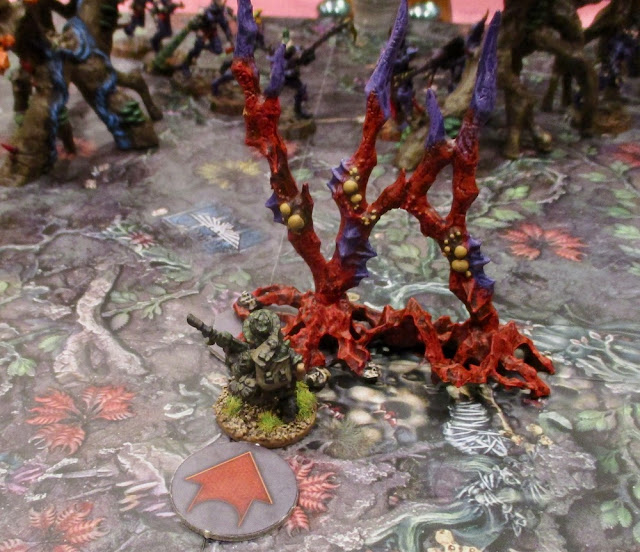 Cpl Hunt Scouted forward up the centre and found a hive full of buzzing insects, that oozed a sweet smelling viscous fluid, he made note of it, but then had to turn his attention elsewhere... 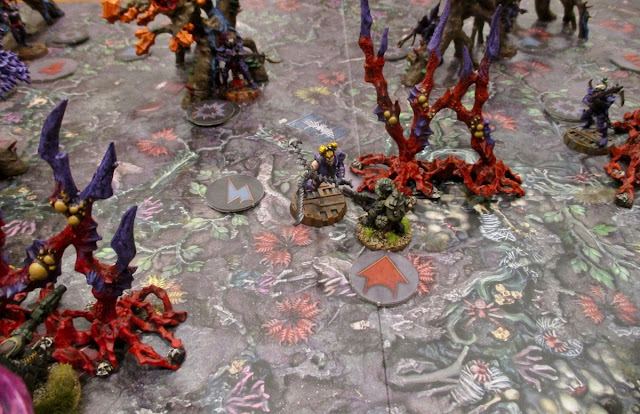 Out of nowhere flashed a gaunt, lithe xenos that slashed at him with strange, glistening, many-bladed weapons. One raked him hard across the back of his neck and arms, cutting deeply - But hunt fought on!

(At the end of Round One we each held two objective markers, both sides received +3 VP for their foraging! Tasty nuts and berries! Seems like an odd thing to be doing in the MIDDLE of a skirmish!?) 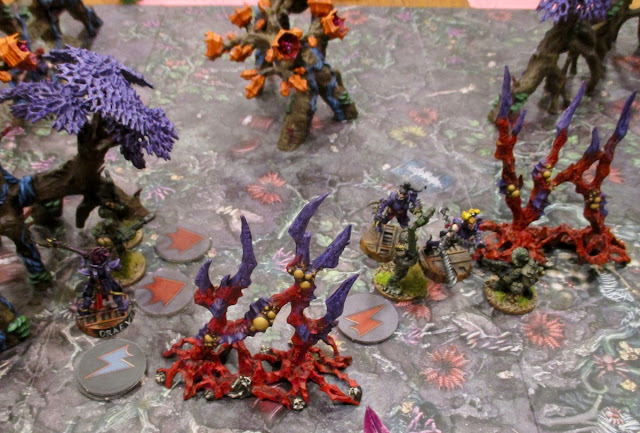 Suddenly there was more upon them! One attacked Taylor and Farnsworth and another with vicious gauntlets joined the attack on Cpl. Hunt - Luckily Sergeant Hammer had come to his aid! The one with the slashing weapons continued her relentless assault on Hunt and took him out of action. Hammer tried to strike at them with his chainsword, but the were just too quick!

Farnsworth was stabbed in the thigh with a cruelly barbed bayonet-like instrument on the end of his attackers rife. 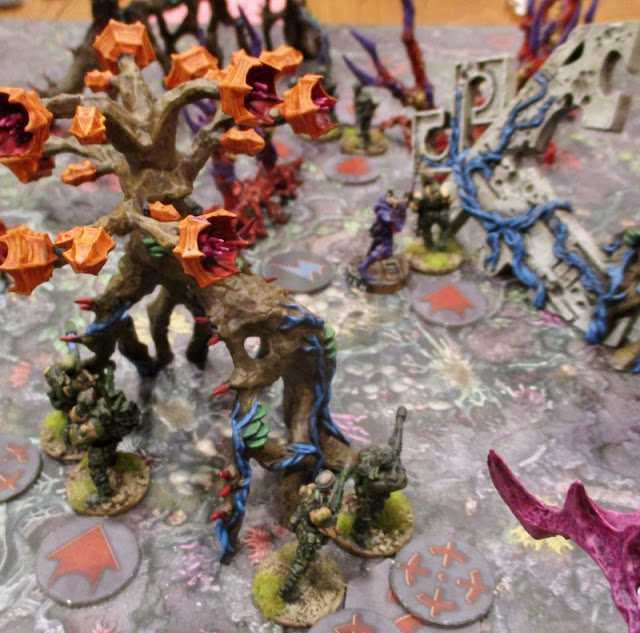 Elsewhere Hawkins and Johnson skirmished forwards to see if Hawkins really did take down one of the enigmatic Aeldari.... They found no trace of the aeldari Hawkins swore he shot... but they did find a number of small animals that someone had trapped and killed, but dropped in a hurry.

Another of the Xenos charged Pte. Sack - who had been following along behind Hawkins and Johnson. They parried each others blows in a brief but desperate melee.

Leaving Pte Broad, who was busy binding the massive hole in he's side from the Dark Lance, Cpl. O'Rielly moved forward to try and help spot for one of the others. He bounded up to Pte. Dyck's position and helped him spot the Kabalite sniper lurking in the trees. A blast of super-heated particles from Dyck's plasma gun but that terrible menace out of action!

(at the end of Round Two I rolled 2 for all three of the objectives I controlled "nothing; keep looking!" while Amanda gained another 3 Victory Points from the SINGLE objective she held!? WTF!? there must have been some juicy, juicy mangoes over in that corner of the table! Half of Amanda's team were either taken out or had flesh wounds... but she didn't fail the break test!) 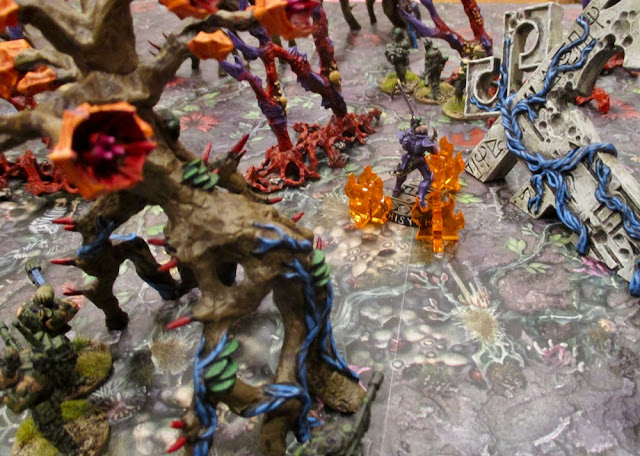 Johnson roared "SACK! GET OUT OF THERE!" Sack ducked the Eldar Warriors swing and took off  into the jungle, before the Kabalite could react, Johnson lit him up with fire!

The Sergeant likewise fell back from his assailants - which was a bit more tricky (Wyches... have to actually beat them both in a roll-off to fall back from them - but he DID!!). With the Sergeant out of the way, Dyck took one of them down with his Plasma gun!

The Sergeant crouched in the bushes a moment, the ferocity and violence of the Xenos attack had left him reeling and he nearly passed out from the searing pain in his belly where the one with the barbed gauntlets had slashed him. (Sarge failed a nerve test!)

(Foraging - Hawkins was bitten - mortal wound! - but only turned out to be a flesh wound, The other locations gained us +4 VP, unfortunately the Drukhari were still in control of two and they ALSO gained +4 VP! 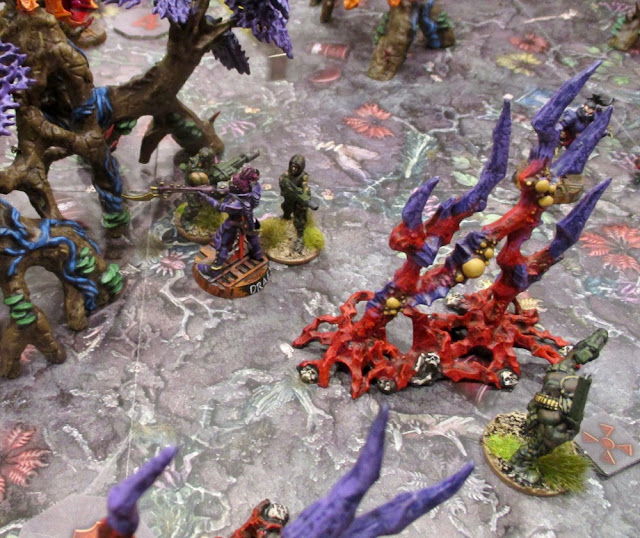 While crouching in the Jungle gathering himself to strike back out again at the enemy, the Sarge took a shot in his back from a splinter pistol!

Taylor and Farnsworth were still in a desperate melee with the Kabalite warrior that had attacked them.

The Plasma gunner took down a third Drukari Wych!

For foraging this round, the three objective I held netted me 3 victory points and 1 command point. the single objective the Drukhari held gave them another +3VP!?  We would be rolling for game end... but BEFORE that Amanda had to decide if she was going to make a Strategic Withdrawal. At this point they had only three left on the table, one of whom was shaken... but they were ahead with the victory points 13-10, I think...? She decided discretion was the better part of valour and decided to withdraw before her ENTIRE team was wiped out... I think she was getting a bit tired too (or MORE tired, as she'd started out a bit tired).

Hammer, Hawkins, Hunt, and Jules all survived their wounds and would be stitched up and ready for action again before the team was sent out again. Pte. Broads wound from the Dark Lance would require some special medical attention - growing back part of his liver and stomach! He would be convalescing for some time. I managed to use ALL of the Specialists tactic cards before they were taken out of action so all gained +2XP which brought all but the new comms specialist two second level. The Sergeant took the "Bold" ability, Cpl. Hunt took "Pathfinder" and Pte. Broad took "Sharpshooter" Both the Regular Guard and Special Weapons Fire Teams made it to second level as well. The Guard Fire Team gained the "Skilled" ability (re-roll 1s when shooting) and the Special Weapons Fire Team gained "Die Hard" (-1 to injury rolls for them).

Seven of the Drukhari had been taken out of action - all but one would heal up in time for the next action. Asphisyk was taken back through the web way and would be convalescing in Comoraugh for a spell before seeing action again. Her Combat Specialist and Zealot made it to Level 2 - the former took the "Warrior Adept" ability and the latter took "Flagellant".

I feel like I got off really lucky... I had some crazy lucky shots early in the game which really thinned out the Drukhari, and then numbers and volume of fire... and the luckiest plasma gunner ever carried me through. If Amanda had decided to stick it out and rolled a one or two to see if the game ended that would have been in and she would have won with all the victory points she had!

I've mostly finished up the old-school metal Cadians I've been painting this week. I should get some pictures up on the blog tomorrow... I'll have about a platoon of them - good enough for Kill Team or Wrath & Glory (if it ever comes out!?).

Not sure if we'll be playing again tomorrow... Bruce isn't available. Amanda is out doing another Karma Class to raise money for Diabetes Canada. Finnegan woke up this morning puking and has been puking all day long! Might be another weekend in watching TV - if we can prop him up. He was saying as long as he was lying down he was mostly okay - it was when he sat up that he felt nauseous and started throwing up again. I set him up with an audiobook and he's been laying in bed all day listening to that...

Maybe The Girl and I will get in a game tomorrow, if she doesn't end up coming down with what Finnegan's got! Looking forward to that... MORE Eldar...
Posted by tim at 3:31 PM