A bit of an odd assortment of 40K related things rolling off the workbench today. A lot of this is actually for the kids. I've been experimenting with... well... other ways of painting. Not for me, I like the black undercoating and leaving that hard black line between things for contrast and deep shadow. When I got the kids painting I tried to teach them the same, but I've come to realize it requires a bit of finesse and attention to detail to pull it off and without that... well... it doesn't look good... So I thought I'd experiment with other things to see if I could help them find a different painting style that suits their needs and/or speeds up their production so they can get things DONE!

Some of these were started a couple weeks ago, but were then put on the back burner as I needed to push to finish the last often Drukhari that we needed for the Strange Bedfellows Team Tournament. Some are ones I tried spraying with coloured primer (purple) and then washed with either Nuln Oil or Druchii Violet (or sometimes both) then highlighted and/or dry brushed... and added some details...

Some of the more recent ones I actually tried out the fancy new Contrast® paints on. I was a little skeptical about these when they were announced, but seeing some of the stuff other people were pulling off with them, I thought I'd give it a try... and I have to say, it's a pretty slick system. I'm not going to change the way I paint overnight and incorporate them. But I think for the kids - and anyone else starting out - it might help get things started and doesn't look terrible. Honestly, if it means I get to play against more painted armies and less bare plastic at tournaments, then I'm ALL FOR IT!!!

These models were from the Big Batch o'Eldar Keira and I bought and split back in May. There were, like, almost 90 of these plastic Guardians that neither of us really wanted. I picked out 30 of the best ones to use for myself - to put together a Battalion Detachment of Ulthwé Black Guardians to go with   the Eldrad Ulthran model I also got out of the lot. After that there were about two more squads worth of decent ones (not broken or missing the do-dads on the backpacks or whatever) that I set aside for Keira, the rest I gave or traded away to Other Tim or this other fellow from the Hunters of the Warp league (for some Fire dragons for Keira - which she was pretty excited about!)

These ones I originally sprayed with a purple basecoat/primer... Then I think I washed them with both Nuln Oil and Druchii Violet... I think I did two test ones one with each wash, and the Druchii Violet wasn't dark enough, so I did Nuln Oil, then Druchii Violet on the rest and then decided that was all too dark and ended up brushing the whole mess with the colour Keira was painting all her other Guardians with (Vallejo Blue Violet?)... and then we got the contrast paints and I wanted to try those, so I painted their Shuriken catapults and pants with white (or bone?) and used contrast paints on those... then did the same with their helmet face plates... and then, because they were all still looking rather plain, I did dots of white on a bunch of the bumps on the armour and did little bits of different contrast paints on top of those hoping it would look like gems or sprit stones...

I wasn't really concerned if they turned out crap, because we'd more or less gotten all these for free and Keira didn't really even care if she got any of them... but I think they turned out not TOO bad. I could have done some edge highlights to make them pop a bit... but I couldn't be bothered...

I also took five that she had assembled and sprayed them white and tried painting the two different purple Contrast® paints we'd picked up on those... the Magos Purple was WAAAAAY too light... and the Shyish Purple was just way too dark... so, more experimentation is needed. I'm going to try thinning the Shyish Purple to see how that works... otherwise, I could just do the straight Shyish Purple and then drybrish with the Blue Violet that she likes....? 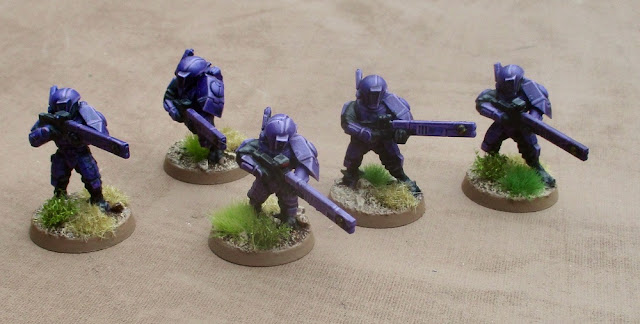 These were also sprayed Purple to start. I did one sample a few weeks ago - I think I may have washed trying only to get the cracks and and then edge highlighted... the rest, when I got to them earlier this week, I did an all over wash with the Druchii and decided that was too dark and then did a heavy dry brush with the Blue Violet and then decided that was too light and did s second all-over wash with the Druchii... and then said "eff-it" and called it quits... the black was the same for all of them - I just blacked out everything that wasn't armour and picked out some detail with a dark grey and presto they were done.

I'm going to get him to assemble the rest of the T'au in the coming weeks and see if we can't knock off this force over the summer. I think I'll stick with spraying purple, try to just get some wash in the cracks (either Druchii or nun) I'll probably do the edge highlights for him, get him to do the black. Should basically work for everything... and should be quick! 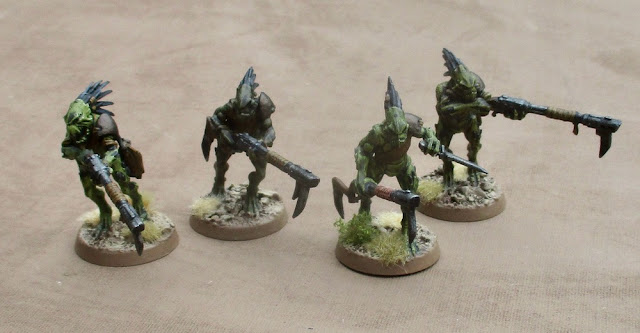 Four Kroot Warriors - I had him assemble these around the same time as the fire warriors. I'd sprayed one purple along with the first five fire warriors (with no intention of painting it purple - just wanted a quick primer). I think this was the darker guy, second from the left... I'd painted it all over with a light green and then washed with Agrax Earthshade... and then picked out their "webbing" with Vallejo Khaki Grey and then washed THAT with Agrax Earthshade as well... then painted the gun black and picked out details with metal and washed that with Nuln Oil and then some brown for the rear stock and more Khaki Grey for the leather wrapping on the barrel and washed that all with Agrax Earthshade... a bit of a process to figure out... In the future I'd probably do all the green and khaki grey and brown at once and THEN wash the whole mess with Agrax Earthshade... then pick out the metal bits and call it done. But I probably won't suggest he do them that way...

The remaining three I sprayed with white primer and washed with some Contrast® paints (Militarum Green?). They were a bit on the light side, so I tried washing one with Agrax Earthshade, but wasn't happy with that, and left the other two as they were. the Khaki and rifle I used the same process as above - which could be streamlined a bit... I got him to start assembling the rest, because these didn't take long at all - and I was figuring things out as I went. now that I have it sorted, the rest should be a snap - and then he'd have enough for a straight Kroot Kill Team - which would be cool. I mean, they could be working for the T'au... or.. ANYONE! I mean, the Kroot are mercenaries, right? 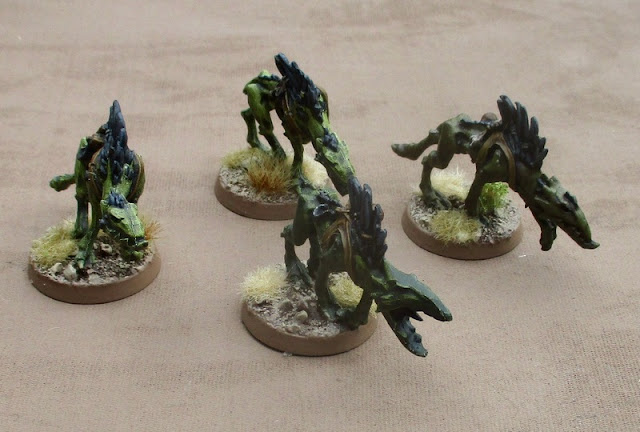 I basically used the same process as the warriors above (one was sprayed purple, painted green and washed, the rest white and sloshed with Contrast®, etc, etc...) the darkest one, up front, was one I did with Contrast® paint and decided it was too like and did a second coat of contrast... and then it was a bit dark, so left the other two with one coat.

This is all the Kroot he had, so these are DONE! 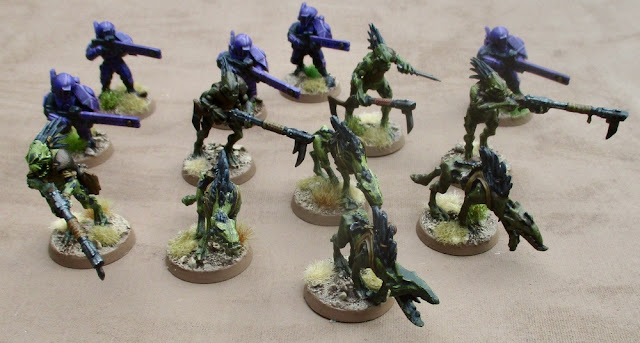 Finnegan's entire T'au force, so far (all painted by me!?). Probably enough for a mixed T'au Empire Kill Team.

We should be able to expand this into a small 40K force over the summer. He has another five Fire Warriors and twelve Kroot to finish up. then there are some battlesuit warriors three XV-25 Stealth Suits, three Crisis Suits and a Commander in... some kind of battle suit... Then a small swarm of drones and an Etherial. I think it's about 35-38 Power Level (or 700-750 points) - enough for a decent sized skirmish!

I DID get some Necromunda stuff painted!! 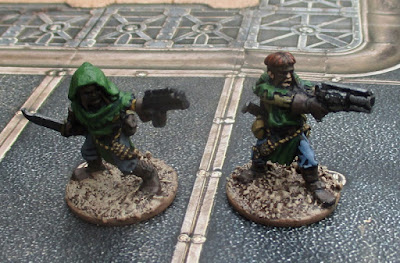 I have another pile of Cawdor in the works... should be done soonish. 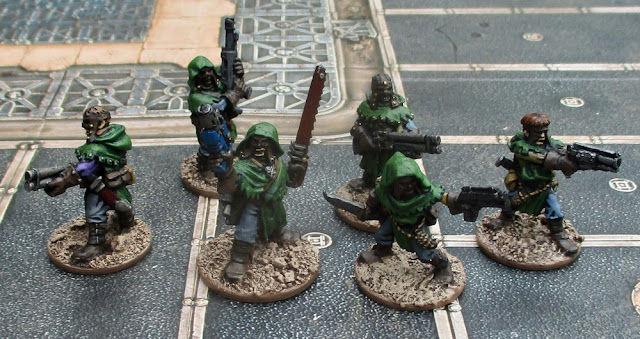 The leader came with his gun cut off, so I'd replaced it with an inferno pistol I had in the pits box, thinking it would be rad (y'know, BEFORE I was actually thinking I'd use them for Necromunda)... but Inferno pistols aren't really an option, so I think I will call it a "hand flamer"...

I have another Champion/leader with chainsword and "auto pistol" (I guess that's what I'll call it... it's a submachine gun like an Uzi or a Mac-10... but there aren't really rules for those... just "stub pistols" - which is what I'm calling the revolver, and "Autopistols" which I'm calling all other single-handed projectile-throwing devices...

There's also a Heavy (Champion) with a Heavy Stubber, and half dozen regular gangers with a mix of Autoguns and Lasguns... none of the fancy pole-arm combo-weapons the NEW Cawdor gangers come with... but whatevs... Oh, and a couple more Juves... 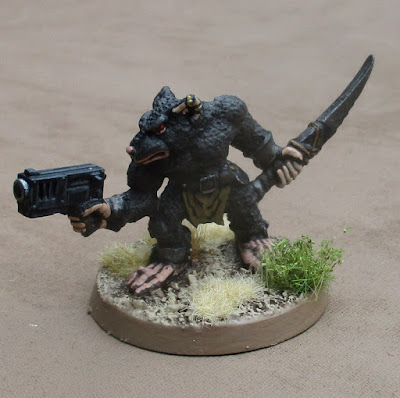 My friend John picked up a box of Mantic Ver-Myn (Space Rats) for me to assemble and paint for him to use as "Chaos Cultists" in Kill Team... as Chaos Cultists can also be used in Necromunda, they'll also see use there, no doubt. I also happened to have this old Citadel Rat Over having about so I cut off his front fist and replaced it with an orc fist grasping a slugga and figured it could be used as an Cultist Champion with an auto pistol and "Brutal Assault Weapon". that's a 40mm base he (she?) is on... hard to tell without a reference point... 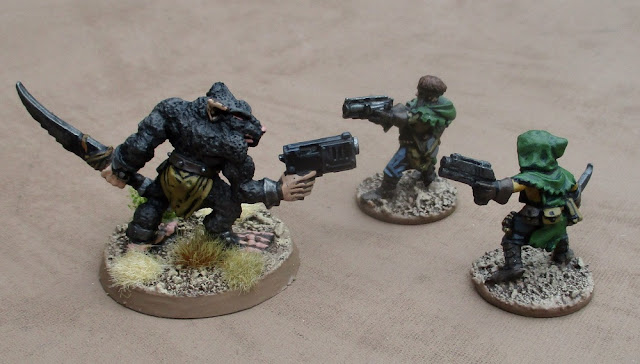 I'm almost done assembling the rest of the space rat cultists... I've ended up using a lot of Ork weapons (as I think the weapons the Vermyn come with look silly...)

(and probably a few more Eldar and T'au as I help the kids sort out a quicker way to paint their own minis!)

I should also post a picture of Keira's complete Eldar force - she's got quite a few now - including a Wraithknight!!! I should do battle with that beastie - throw some Russ' up against it and watch them get cleaved by the Gigantic Freaking Wraithblade!!

Maybe some Shadespire stuff as well - I have more of those back on my workbench for John (Rats and Dwarves) and they seem like they should be easy to knock off and then he has two more complete factions to use in the game...
Posted by tim at 10:14 AM