Not really part of THE PLAN....

Sure, a Daemons of Chaos army WAS part of the plan... but that mostly involved painting up the stuff from the Wrath and Rapture box set... and maybe a few more Slaanesh items I picked up on Boxing Day...

The short version of a long and convoluted story was I was looking on eBay for something specific - that WAS kind-of, sort-of related to THE PLAN... and stumbled across... other stuff... Included in that "other stuff" was a lot of old plastic Death Guard Plague Marines - and they were dirt cheap! Like 20 for the cost of buying three new ones... so... How could I resist THAT action. (I guess people do't dig on the old models now that there are newer, fancier ones...?)

I should just never even LOOK at ebay...

The Icon bearer is actually a metal figure and wasn't part of the main lot - but from the same seller and still, pretty cheap... cheaper than buying a single new plastic marine - let along some sort of individual character model!

I tired to paint them very quickly with Contrast® Paints. I think they look pretty awful... but they're Death Guard... They're SUPPOSED to look "awful"!?

Since there will only ever be 21 of them, and are most likely to just be used in Kill Team, I gave them all names and painted them on the back of their bases. 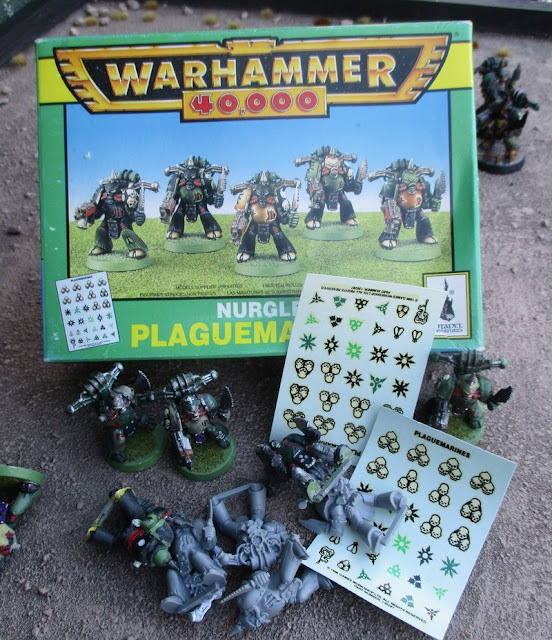 With the lot I got an original box and some decals. I've never really used decals, but I thought I'd give it a go with these. They looked terrible. So, I scraped most of them off.

I also didn't use the bases that came with them. The "standard" for space marines, these days, are 32mm bases... so I stuck them down to a few of those I had kicking around. I'm running short on the 32mm fancy bases, but I DO have a load of plain bases (because I've had a bunch of figures that I put on fancy bases and didn't use the plain base that came WITH the model!).

In retrospect, it was a bit daft to pick these up. I really have no desire to build some "Chaos Soup" force, and Nurgle is my least favourite of the Chaos forces. These will likely only ever be used for Wrath &Glory (the 40K role-playing game) or maybe Kill Team or possibly a 40K game where there is a narrative reason to field them... or I'm trying to put together an Apocalypse force and need one more Chaos detachment...

I should probably keep a weather eye out for an old metal Nurgle/Death Guard champion and/or sorcerer, though - to be a detachment commanders for this small force. I actually have 21 of them (including the icon bearer) which means I could field three units of seven - three units is what is needed for a Vanguard Detachment in both 40K and Apocalypse, and SEVEN is the number of Nurgle!

I noticed the that new Death Guard Squads are actually sold in boxes of SEVEN! I was pretty excited to see - just a little bit - that the army organization was matching the fluff in some small way... I was disappointed to find, then - in the data cards for Apocalypse, at least - that the standard size for a Death Guard squad is still grouped in fives... five for Power Level 4, ten for Power Level 7... (you can get a "reinforcement" set of three - to make a squad of ten.

Daemons or Death Guard (I do have another 16 of these... and they are pretty quick to paint with the Contrast Paints!)

Or possibly some Blackstone Fortress stuff!
Posted by tim at 12:42 PM