Now any sensible person would probably just go out and buy a couple packs of the Pirates of the Spanish Main CSG and assemble and play with the cardboard ships. Poof instant navy…. Well no one ever accused me of doing anything sensible. No sir, I decided to save myself $20 and spend a couple whole days making my own damn ships out of scrap bits of MDF, recycled cardstock and toothpicks…

Step One: It’s Good To Have A Plan 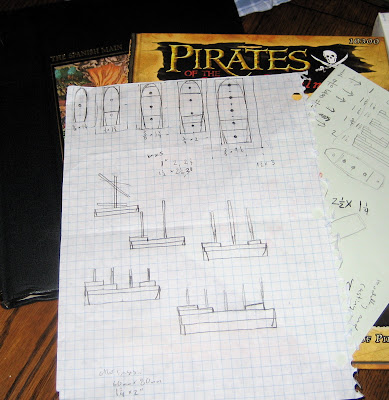 I drew a great deal many plans like this. Lost some. Threw some out. This was the last one I drew the morning I actually started cutting wood (if you want to call MDF “wood”). I even varied from the plan once I started actually putting them together – and that’s okay – but still it’s good to have a general idea of what you’re trying to do.

So the basic plan was to have five very generic looking sailing ships (corresponding with the five basic ship categories in Savage Worlds: Pirates of the Spanish Main ) which have between one and five masts. I was going for a late 16th/early 17th century look… now I know next to nothing about ships and stuff so please don’t go posting comments telling me that these don’t look historically accurate because I just don’t care that much… Anyway, these generic ships would be made from strips of 1/8” MDF that would be carved to shape and layered up as required, shaped a bit more and then stuck to a base (also made of 1/8” MDF).

I wanted to have fairly standard base sizes but obviously they couldn’t be on the same size as the single-mast sloop would look lost on a base big enough for the five-mast man-o-war. I think I went with three. One for the one, two, and three mast ships, and separate ones for the four and five – though they, I think, are the same width – the five master’s base just being a wee bit longer. 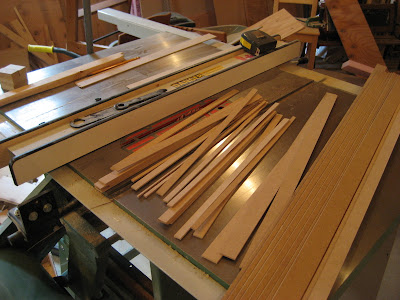 A table saw is a wonderful thing. I cut a pile of strips for the varying widths of ships and bases. 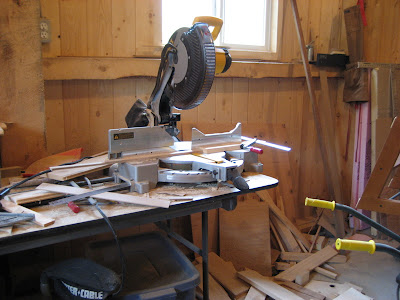 More handy toolz: the compound mitre-saw (I don’t have these JUST for hobby projects…!). 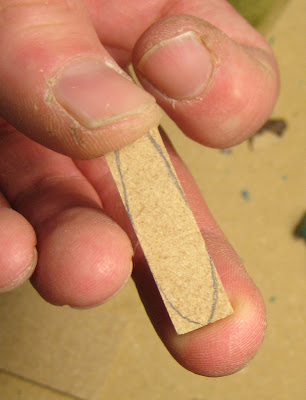 Like such. I didn’t want to try and take a picture of myself trying to carve them as that, for sure, would have ended in removed fingers… I just use an Olfa L-2 snap off blade type knife for this (and most hobby hand cutting…) 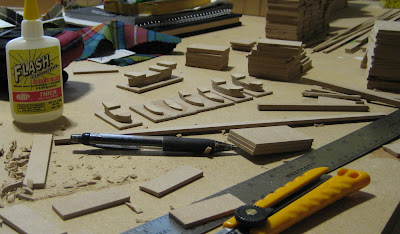 Layer them up and do some more shaping as required then stick them on a base. The gluing is all done with Flash glue as I was feeling impatient I could just have easily used carpenter’s glue – as I usually do for most projects involving MDF. Flash glue is a cyanoacrylate – like “superglue” but waaaay cheaper.

Glue and shape up the ship BEFORE sticking to base – as it makes the shaping of the ship way easier.

For the mast I used a combination of round toothpicks for the … uh… upright bits(?) of the masts and flats for the ..uh… horizontal bits that the sails actually hang from… (yeah, dig that technical terminology… that’s how little I actually know about the age of sail… and chips in general – I know enough to realize that there probably is a specific technical term for all these things… but I have no idea what they are… maybe some of you more knowledgeable types can set me straight by posting a comment below…).

Step Seven: Make with the Masts 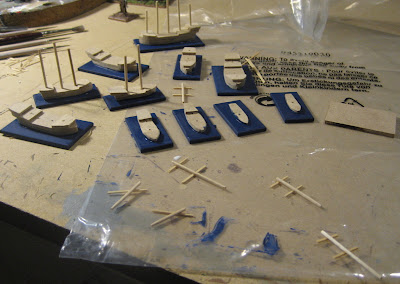 I just glued the (slightly shaped – so as not to be too tapered) flat toothpick crosspieces to the round toothpick with carpenters glue, for at least some of them, others might have been done with flash glue.

I also painted the bases just to get a clearer idea of what they’d look like in the end. I also played a quick game with Jeff Peterson just to see how the system (with a few of my own tweaks) worked out.

Now originally I wanted the masts to be removable, like the Pirates CSG ships, to mark the damage taken by the ship. After the game with Jeff the toothpicks were all coming apart… they needed to be sturdier… 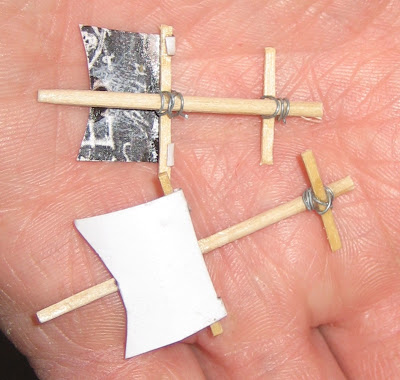 Then I got this brilliant idea that I’d wrap them with very fine wire… this didn’t work so well as it made putting the sails on difficult. In the end I decided to go with the original plan and hope that once the sails were attached, every thing was painted and covered with a spray finish that that might hold everything together. 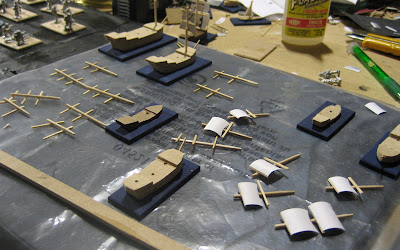 The sails were made out of cardstock. They were cut to shape and then wrapped around a pencil to give it a billowed look and then glued, top and bottom, to the masts with Flash glue. At this point it became painfully obvious that these would be very flimsy and there was no way they could survive being yanked in and out of the ships… so I decided to glue them in permanently and hope that if they were handled carefully enough, by their bases… they might survive more than one or two engagements…!?

Actually I kept the masts and sails out until after they were painted. It was easier that way. Hosed them all down with spray finish and presto I have a navy!

Questions, comments or corrections of naval terminology… please post them below!
Posted by tim at 8:15 PM