This week Amanda completed her first half century and levelled up to 50 and ready for some Epic level adventuring! 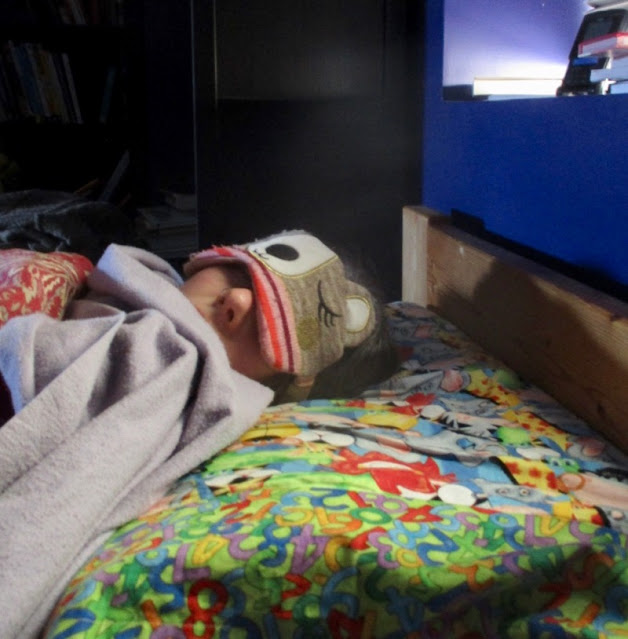 Levelling up from Master to Epic is exhausting stuff... Our heroic adventurer began her day... by sleeping in a bit. 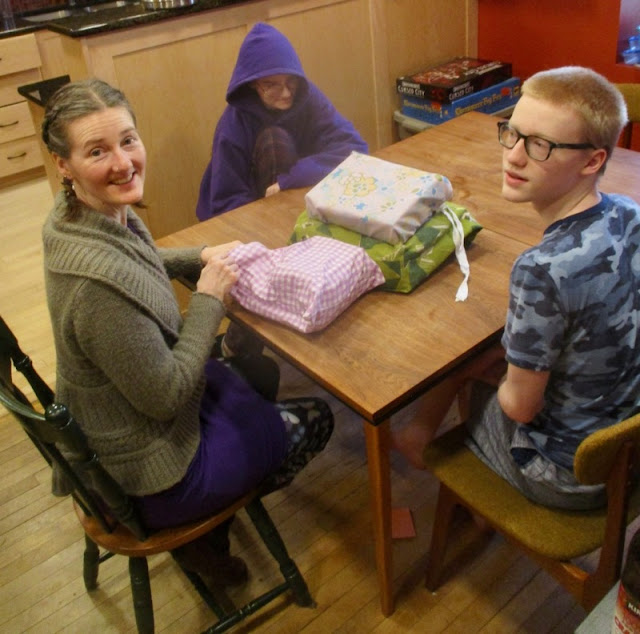 There were some presents. 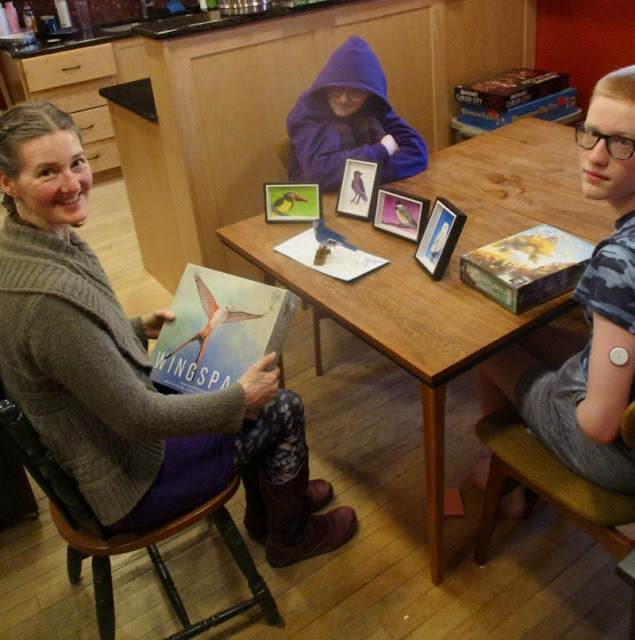 We had a bit of a bird theme going.

You can see more about the paintings the kids and I did here: 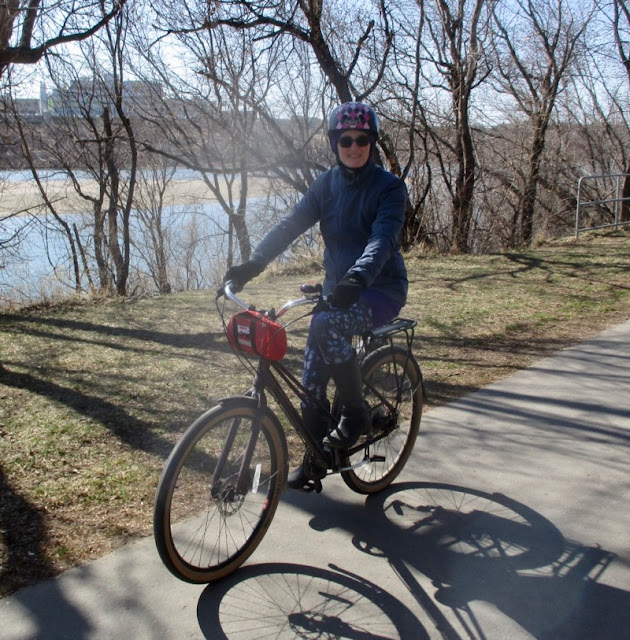 Then we went out for a little ride. Amanda had 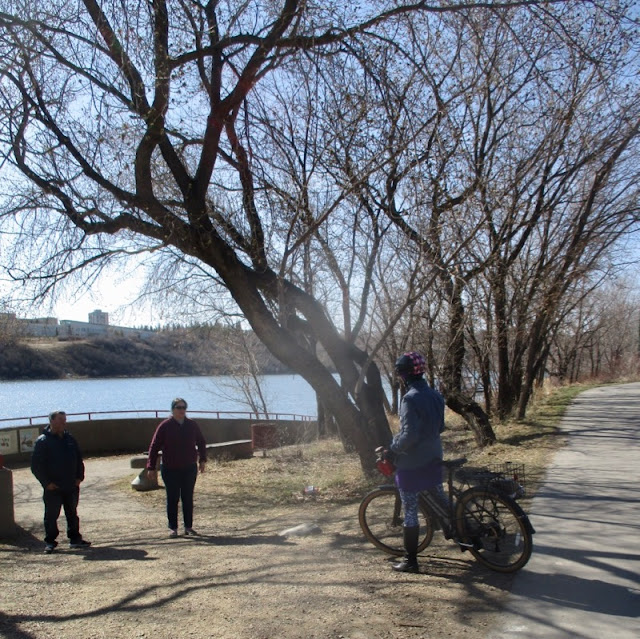 Just happened to run into a friend of Amanda's from work along the trail! 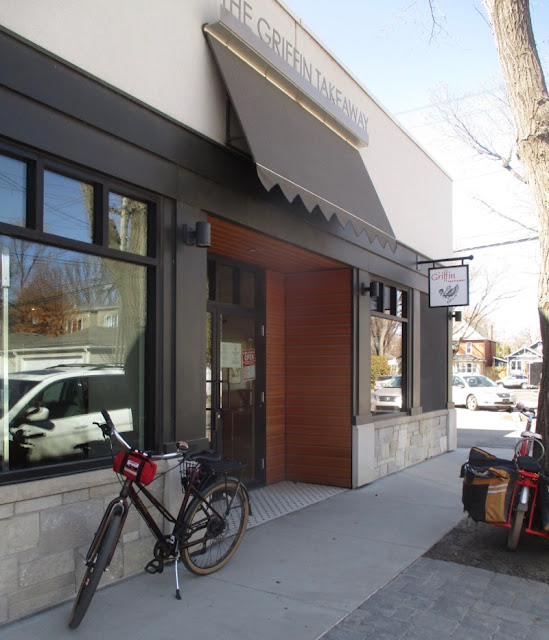 Stop #1 - The Griffin Take-Away. A new (to us, anyway) place in City Park specializing in Vegetarian/Vegan/Gluten-free cuisine. We got our lunch from here and Amanda's cake and some other snacks. 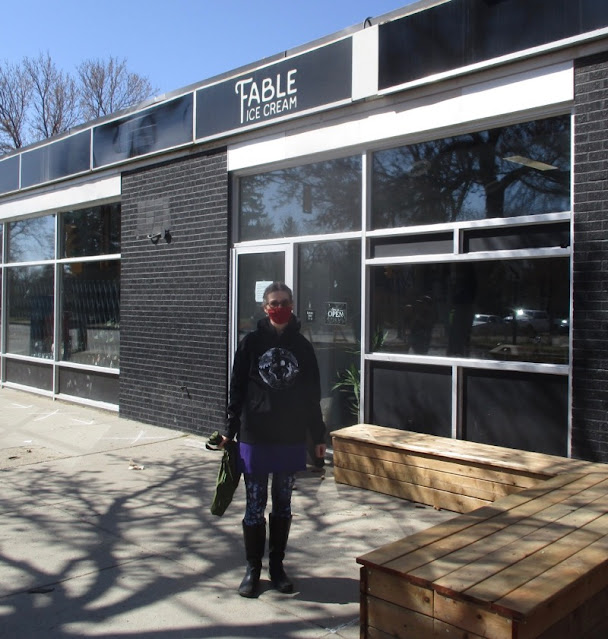 After we got back from there, we walked over of Fable Ice Cream to get some tasty ice cream (and ice cream adjacent products) to go with the cake. Amanda also got one of their hoodies which she'd been eyeing up for some time. 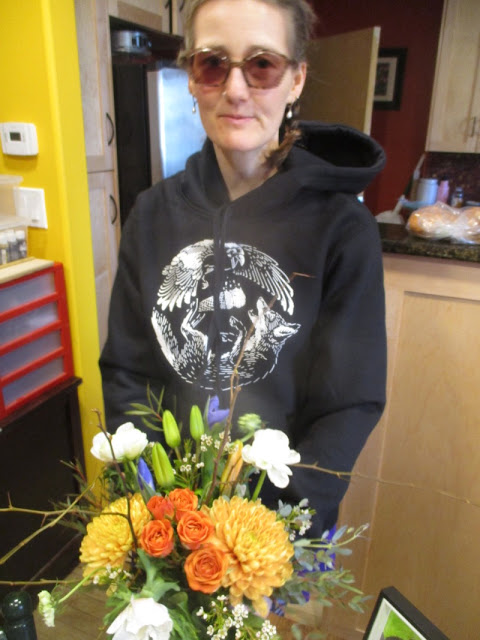 We returned to find flowers had been delivered - from Amanda's friend Natalie in Ottawa! 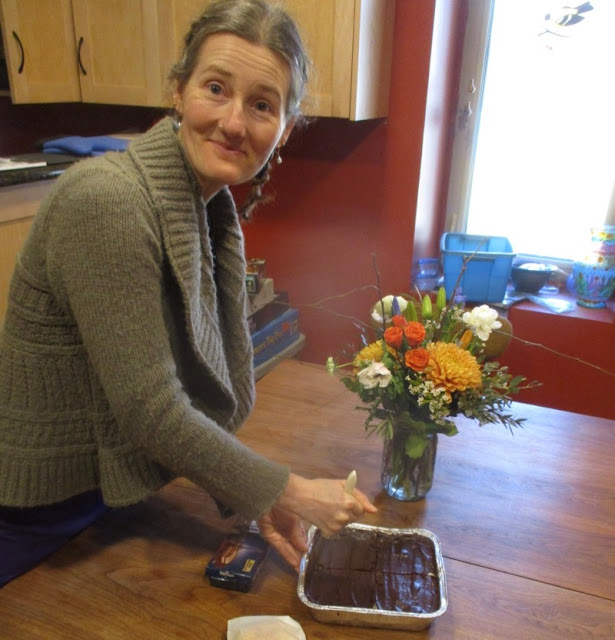 Cutting up the pan of Nanimo Bar from Griffin. It was delicious. 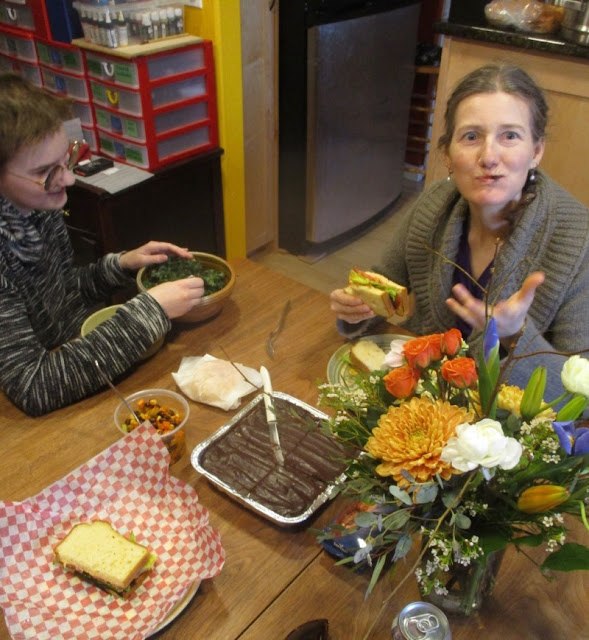 Lunch - Amanda and i had sandwiches Keira had a salad and Finnegan had a soup and scone - all from Griffin Take Away. 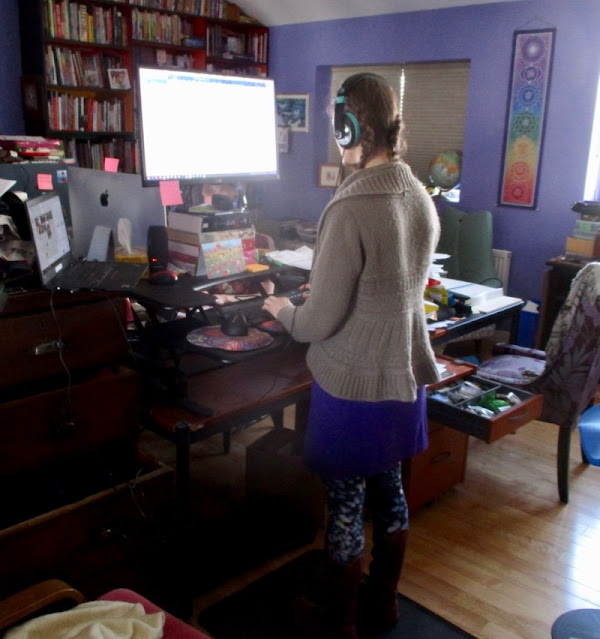 Because Amanda is a workaholic psychopath, she only took the MORNING off and worked all afternoon - attending a meeting that even her direct supervisor told her she could just not attend and take the whole day off...!? Ah well... 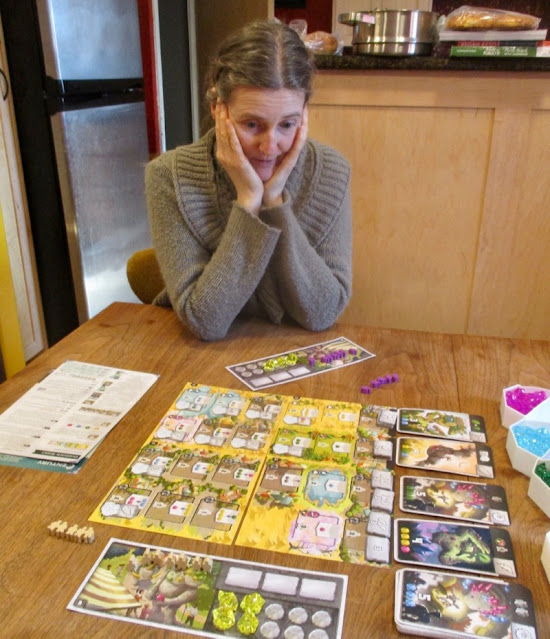 While we were waiting to go pick up supper, Amanda and I played Century Golem Edition: An Endless World - One of the games we got her. Not particularly Bird-themed... it was a last minute addition because I had only just found out it was available and mentioned it to her the other day and she said "Oh, you could go get it for my birthday..."

I wasn't about to say "No, we already secretly got you OTHER STUFF" and NOT go out and buy ANOTHER GAME!?

It had a few more "moving parts" than the previous two Century games - but we HAD played the original version with a friend and once I started explaining it, she started to remember. 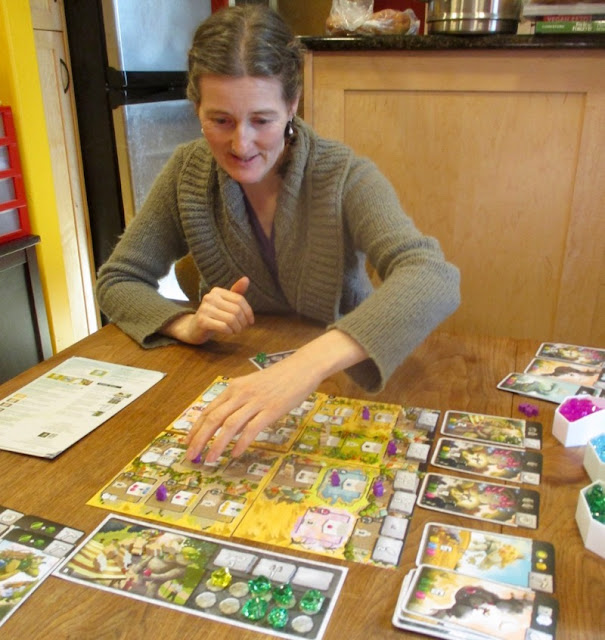 And pretty soon she was just destroying me at it... Well, okay... she won by one point...

After the game, as Finnegan was wrapping up his D&D game, Amanda and I nipped out once again, over to Broadway to pick up supper from Kashmere. 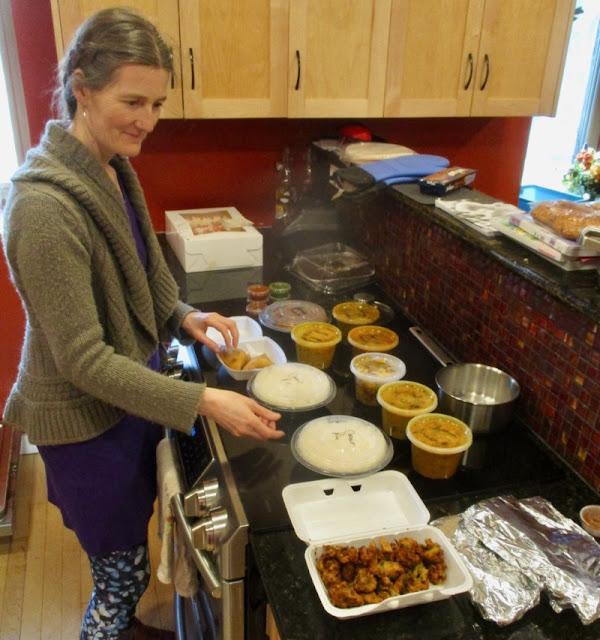 A feast fit for an epic 50th Level Warrior Goddess. 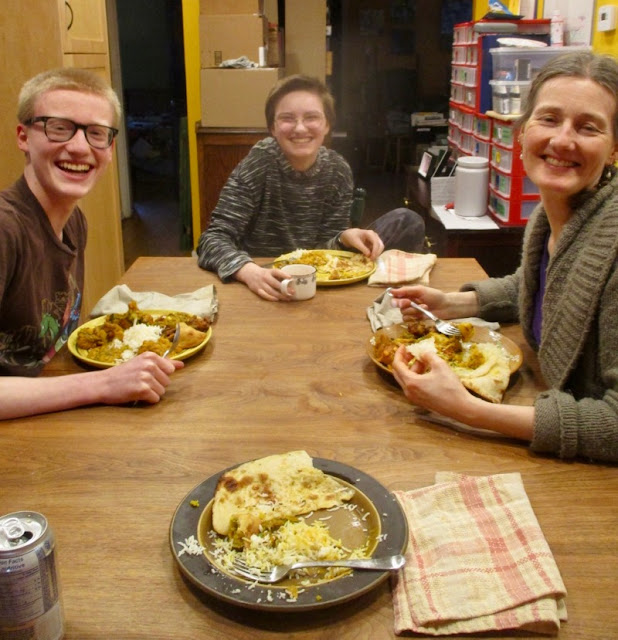 It was pretty tasty. 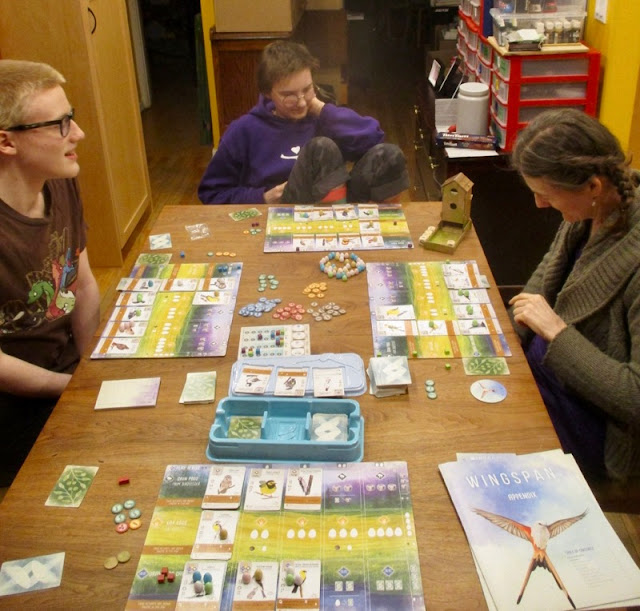 After supper we were just too full to have dessert, so we played Wingspan - the other game we got for Amanda - the one we Originally planned on. The kids even played! 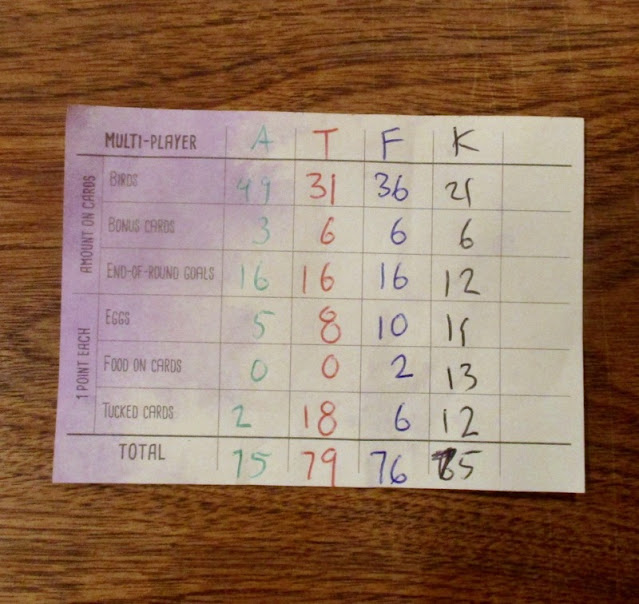 The game was super close and what was really interesting was that we all had totally different ways we'd gathered those points. Amanda had just tried to get high-point bird cards in her sanctuary - honestly, when we started the tallying and she was over 13 points ahead of Finnegan and almost 20 points ahead of me and 30 ahead of Keira, I though we were doomed.... I was "tucking" cards -actions on cards that when activating meant a card got placed under a card already on the board - which was worth extra points a the end of the game. Keira had piles of food stockpiled on birds and Finnegan hd a pretty even mix of everything.  I think there will be loads of replayability. 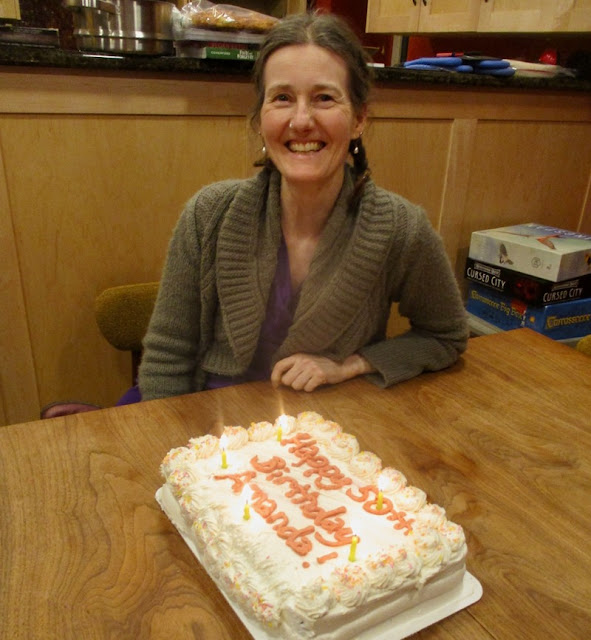 Afterwards, there was cake and ice cream. 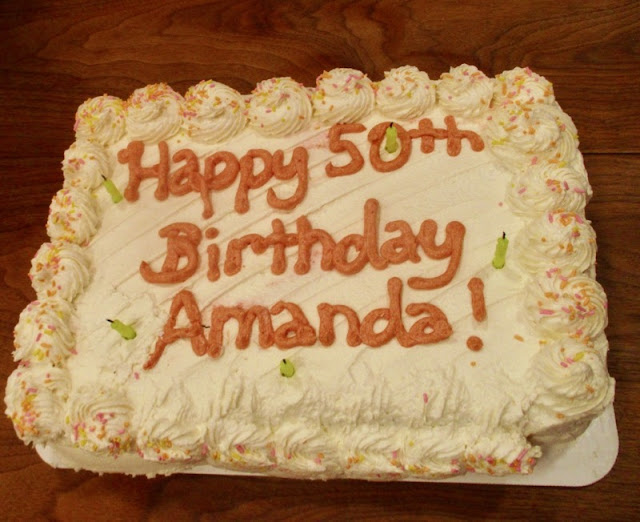 part of the fluffy icing slumped which transporting it home... it was delicious, nonetheless. 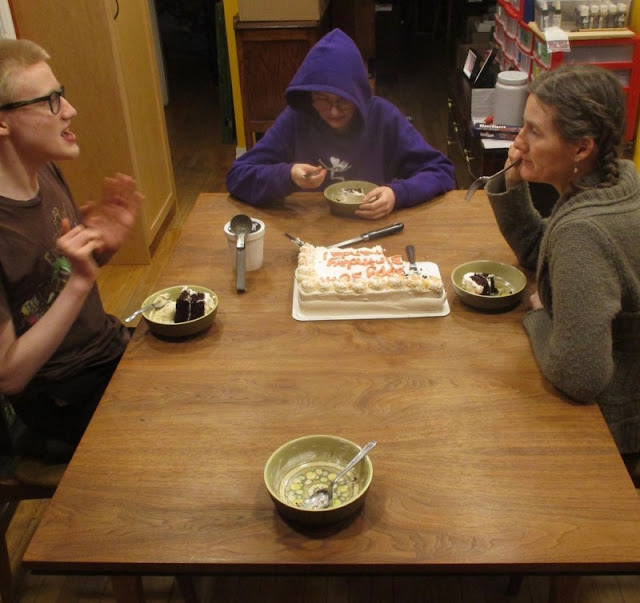 Amanda had wanted to do a FAmily Dance Party... but after all that food and cake... no one was feeling up to that... so we started watching the second season of The Good Place, which was a fun way to wrap up the day.