This evening we tried out a set of rules I’ve cobbled together and been jokingly referring to as Ever Contemptible Victorious Little Black Powder Armies (of DOOM!). It’s basically a modified version of Ever Victorious Armies – with some ideas added from Contemptible Little Armies and Black Powder. (The “of DOOM” was added because John Burt said he would definitely play any rules with “of DOOM” in the title). It is pretty much the same rules I used for a couple Great War in East Africa games back in February (Rais on Tantoone Station and Retreat from Boongobe).

I’ve been painting Zulu War figures and have been anxious to get them into action so came up with a simple skirmish scenario that could make use of pretty much ALL the Zulu war figures I’ve painted so far. John came over to play the game.

I need to get painting more Zulus…

After the debacle of the first invasion Lord Chelmsford is biding his time waiting for reinforcements to arrive so he can launch a second invasion into Zululand. In the meantime raids and patrols are being sent across the border to harass the Zulus and scout potential invasion routes.

A company of the 24th infantry is stationed at Bert’s Drift. A couple days ago a squadron of Mounted infantry crossed on an extended patrol – but as they return a force of Zulus is moving to block their retreat!

The British must retire back across the river.

John decided to play the British and I played the Zulus. 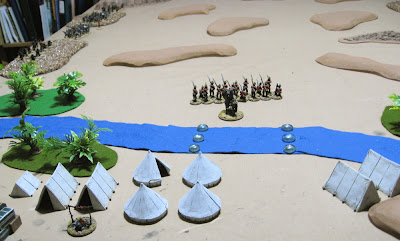 The British Infantry Company defending the ford (and the camp beyond) – Zulus skulking in the distance…. 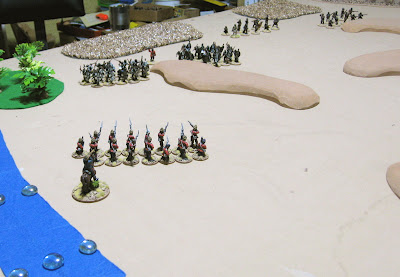 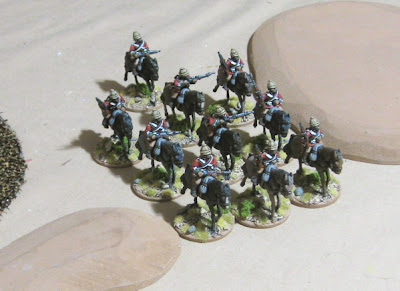 The mounted infantry making their way across the table in reasonably good time. 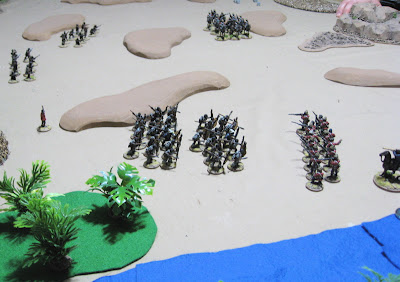 The first long range volley from the British had knocked three off of my unit (the turn before this). 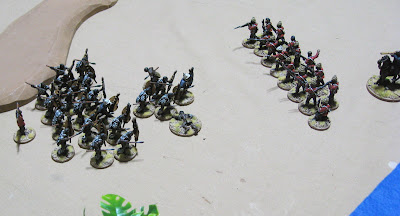 BLAM! The second volley (at considerably shorter range) took down eight and caused two morale failures. No more forward movement for these chaps… 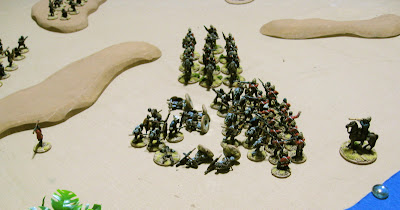 No worries… The second unit passed them right by and crashed into the British. Defensive fire as they charged in took down five Zulus – a completely average roll – and just enough to give the British 3:2 odds in the close combat. Of course the Zulus are ferocious which still gave the Zulus a net +1 advantage. I roll a five, John rolled a one… 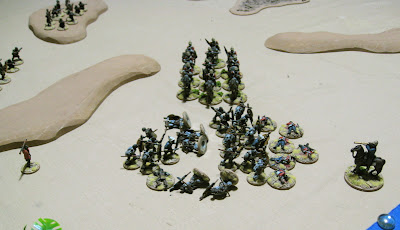 Poof! The British infantry were wiped out!!

Well… as that was all over in about twenty minutes or so we decided to set up again, switch sides and have another go of it…. 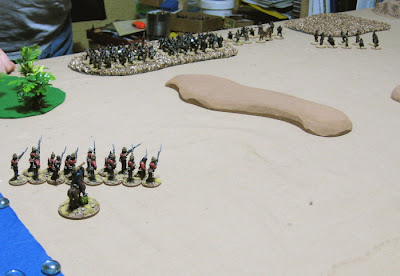 My gallant British infantry re-deployed to face the zulu onslaught… 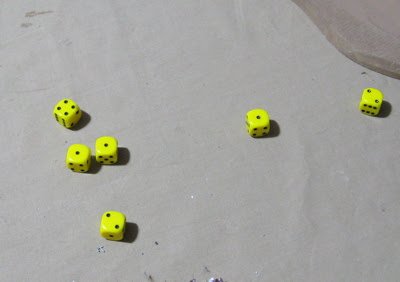 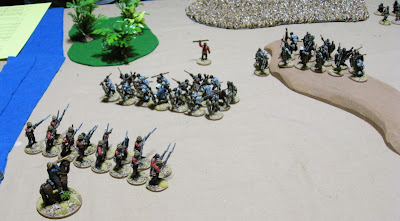 John’s Zulus were a bit more anxious to get into combat and their first move into range brought them into short range. 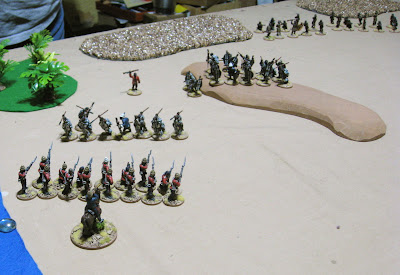 BLAM! Half the unit disintegrates… 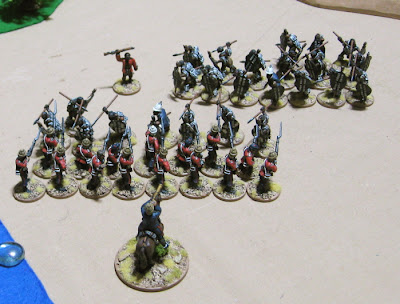 The remainded closed and fought a pretty pitched battle – I can’t remember how many exactly but I think we both lost a fair chunk. 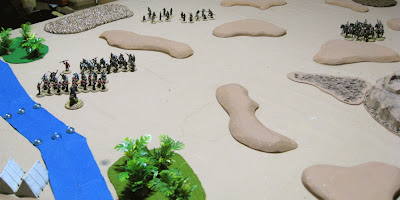 The general scene after the first round of close combat. The mounted infantry still very far away and feeling somehat threatened by the advancing skirmishing Zulus with firearms…

On the following turn the second unit of Zulus closed and because of the previous turns close combat outcome I was unable to fire… The British were obliged to retire back across the river with only half their original number.…

The mounted infantry, waiting to see how things would turn out with the infantry and if they’d be able to make it across the river of if the drift would be plugged with hordes of angry Zulus, acrually stopped a turn and exchanged some fire with the skirmishing Zulus. 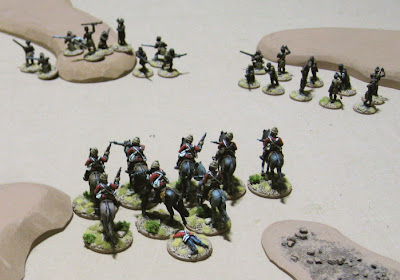 Just out of half range the mounted infantry caused negligible casualties against the skirmishing Zulus. The Zulus, however, caused a few casualties and a morale failure.

The following turn the Mounted infantry tried to scarper towards the drift, but the Zulus pursued the British infantry across the ford and all but wiped them out. It wasn’t a bad close combat outcome – but I rolled really poorly for my losses (six!) and only two remained and I failed two of the three morale tests I had to make and that was that…

Two games. Started after 8PM, done by 10PM. It was fun and quick playing – I think it could easily handle a great deal many more troops and not get too bogged down.

I’ll have to think the shooting ranges relative to the potential distance the troops can move. Right now the shooting seem a tad on the short side… but I woldn’t want it too much longer lest things be able to shoot clear across the table and negate any desire or ability to maneuver (except under cover…).

More Zulus and British (and Martians) and ACTION!!
Posted by tim at 10:41 PM