After a brief distraction with the Red Redemptionists, I'm back to painting the Eldar I need for the Battleforce: Recon tournament next month. (Actually I STARTED those Red Redemptionists BEFORE I started on all the Eldar, so, it's more that I took a break from the Eldar to finish off something that I'd already started).

These are a relatively recent acquisition - most of the Eldar I'm painting up I've had for years and just never gotten around to painting them. I never had any Dark Reapers, though. I didn't really NEED them as I have three Wraithlords, which would take care of any Heavy Support requirement to fill out a Brigade detachment... but this batch popped up on eBay and weren't too outrageously priced, so I picked them up to have a few more options.

(Also I saw some Knight players moaning about Dark Reapers on a thread somewhere - and as there are so very many Knight players around here, I figured they might be something handy to have - though I have to admit, I'm not sure why they were so terrified by them...? Maybe they were fielded in much larger quantities...?) 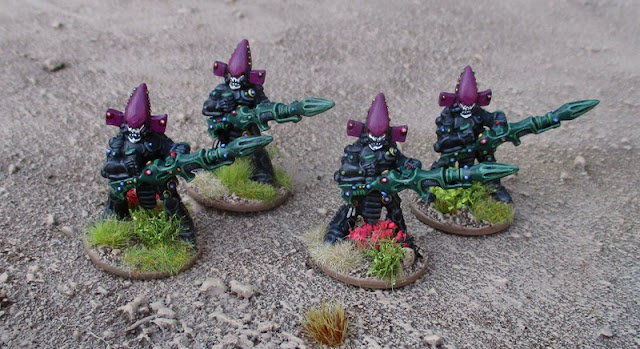 Sometimes I hate posting pictures... especially small groups or individuals - as the pictures get blown up so much larger than the figure actually is and magnifies any poorly done bits... ugh... (I'm not super happy with how their faces turned out) Got to remind myself, NO ONE WILL NOTICE ON THE TABLETOP!!! Moving on....

Usually Dark Reapers are painted with red and/or white helmets and Reaper Launchers, but I've been trying to tie the whole Biel-Tim Warhost together with purple helmets and green weapons one EVERYONE (from Guardians, to Warlocks, to Aspect Warriors) - so I've stuck with that pattern here, albeit with a darker green for the weapons and a more reddish purple for the helmets....

I've been reading Gav Thorpe's Path of the Warrior (the first book in the Path of the Eldar trilogy) and that's been making me want to paint the Striking Scorpions I have (even though I have no plan on using them in my tournament force) as that is what the main character is. I'm almost done thought and then I'll be on to Path of the Seer - hopefully that will make me forget about the Striking Scorpions (for the time being) - and will only inspire me to finish off the remaining Warlocks - of which there are only two or three... and they're mostly finished anyway...

Wraithlords. Yeah, pretty sure it'll be the Wraithlords. though I've been jumping around a bit, work on the Warp Spiders has been going very slowly, and I haven't even touched the Swooping Hawks. I do have a few more Warlocks and a second Autarch on the workbench that I've been working on, bit by bit (that I totally DON'T need for the tournament - so should probably try and focus on the things that I DO need!!)
Posted by tim at 10:08 AM