I finished most of these up a couple of weeks ago for one of the Rise Up! games. I picked up all of the Wall of Martyrs defence line bits from Kill Team Kill Zone boxes (and maybe one of the Kill Team Starters...?) I painted a few of then almost two years ago when I first got them (Trench Bits - Bunker) and the rest languished, partly painted since then. I thought I'd make a push and get them done for the aforementioned scenario - and then I'd have them for any future games played on 40K Kill Zones.

All of the Wall of Martyrs bits. 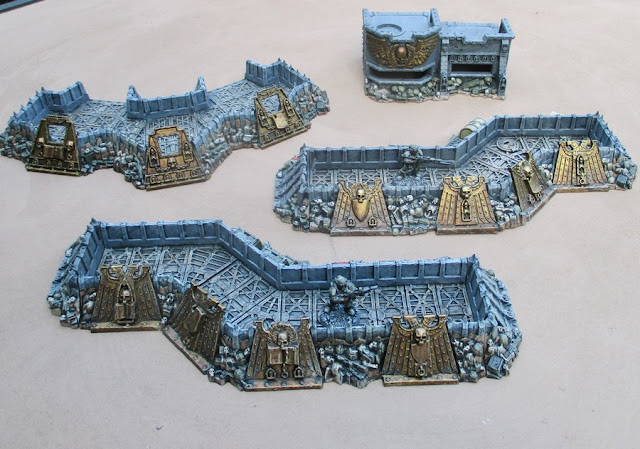 I can't remember which bits came in which sets. I think they're normally sold separately as a bunker, a weapons emplacement, and a pair of trench lines.

This is the Weapons Emplacement. It's newly painted. 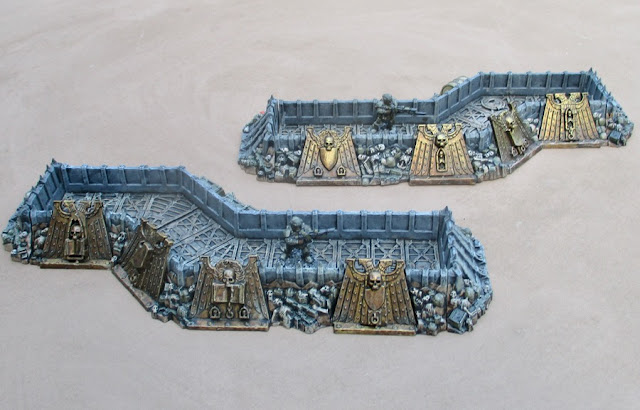 The trench lines. ONE of these is newly painted. 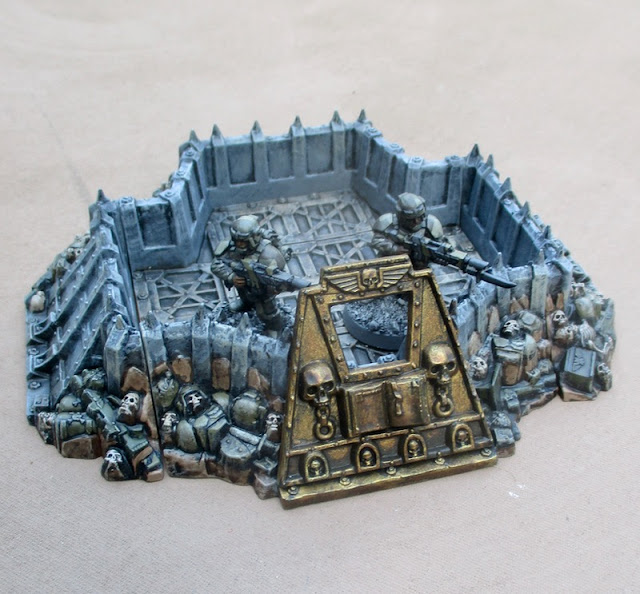 They can even be fashioned into a small forward listening post!

There are tabs and slots on the ends of each to help hold them in place. I carved the tabs off two of the trench end bits so that they could be lines up flush with the bunker - which does NOT have the tabs and slots, but DOES have doors on either side that seems like they were MEANT to exit into trench lines... (of course I forgot to get a detail photo of this... and I'm too lazy to dig everything out and take new pics... You'll just have to look for them in the game reports!

While the fronts are littered with the desiccated remains of guard soldiers and discarded weapons, the backs of the trenches are piled up with all manner of ammo crates and fuel tanks.

I also happened to paint up a few Sector Imperialis Ruins bitz. I thought, maybe, if I had time, I'd get a few of these done for the game... but didn't, in the end, and just used the STC Ryza Pattern ruins.
These were a couple of the smallest pieces, that I did more or less as test pieces to see if I liked the colours. I am relatively satisfied with them, so when I get to doing the rest of the ruins, I'll likely paint them mostly these colours.
Coming Soon to Tim's Miniature Wargaming Blog:
Ummm....
I don't actually know...
Things are feeling... rather uncertain, at the moment.
Probably more of the usual - at some point: more toys, more games.
Hang in there.
Posted by tim at 4:14 PM