Here are some pics and a report on the progress of the Vimy Project.

Last week I finished painting all the figures I need for the scenario. All of the figures below I modeled, molded, cast and painted myself since last November (with the exception of the two British and two German trench mortar teams and three British officers that I will be using as staff officers – they are all from Renegade Miniatures).

Hopefully I will be all finished the terrain for Monday when I am planning on playing the scenario on the 90th anniversary of the battle – it’s even Easter Monday – as it was in 1917.

There’s the whole she-bang! Two brigades of Canadians (the 11th and 12th), two regiments of Germans, plus an additional battalion of Canadians (the 85th), and two batteries of trench mortars each. Doesn’t look like much. Dang it was a lot of work! 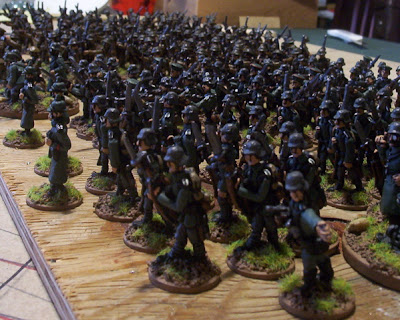 A close-up from the German end. 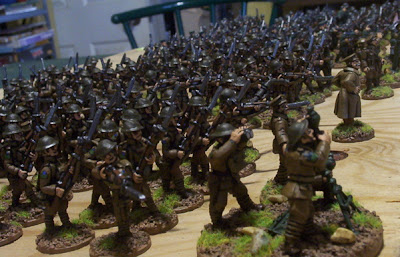 A close-up from the Canadian end.

The playing area is pretty small; 4’x4’. This is mostly due to that maniac vision of doing the whole corps attack one day. At the far end of the Corp’s line of advance the table will have to be 8-10’ deep at the same scale. Going any bigger would be silly.

There’s the four boards of MDF with the trenches and elevation lines all laid out. 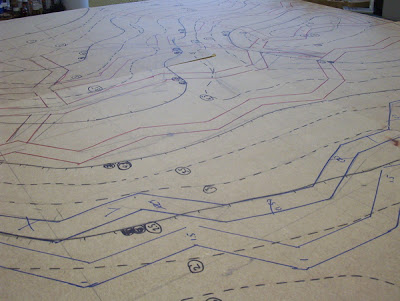 Close-up of the same thing. 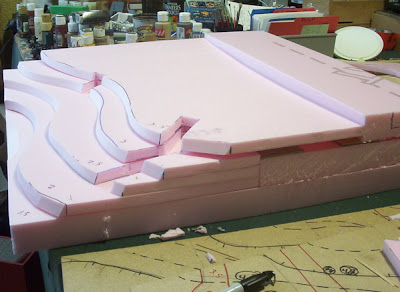 Starting to cut the foam.

Stay tuned for an After Action Report of Monday's battle!
Posted by tim at 2:23 PM