I had been planning on getting the tanks based and running a tank battle in the Western Desert last night but then my VDV beret I ordered off ebay showed up in the mail and I took it as a sign that Scotland was to be invaded by the Russians….

A company of Soviet VDV dropped during the night near Dunny, Scotland. Their mission was to secure the vital crossroads and bridge over the Black Dunny Water to prevent British ground forces to move forward and menace the Soviet amphibious assault on Northern Scotland later in the day.

As dawn broke over Dunny, the desantniki found themselves positioned in the town with only about 20 men missing or injured. Just east of town, however, two platoons of Territorials were forming up to counter-attack the village, and Paras were on their way north by helicopter!

The VDV hold the village. The British forces have to counter-attack and take the bridge by turn ten (looking back – if we’d had more time they should have had to take the bridge and clear all of the buildings – but they definitely would have needed more turns to do so!)

1 platoon of WW2 SS Re-enactors – deployed within 15cm of the East table edge
3 Infantry Sections (attacks 2/30)
(These guys had no HQ – they would act only on the British players initiative phase. They would make one move toward the village each turn until they got within initiative distance of enemy troops then they could act as they wish taking one action per turn on the initiative phase. If there were British troops within initiative range each stand would have to dice before firing, on a 6 they would fire on the British by mistake).

A Company, 3 Para (At the beginning of each turn, after the first, the British player would dice and if the doll was less than the current turn number these would arrive using mobile deployment form any table edge)
CO (CV10)
HQ (CV9)
9 Para Infantry Section/stands
4 LAW-80 upgrades (I should have made these Carl Gs and only given them three… whatever…)
1 SF-GPMG Section/stand

Dunny, Scotland. The Black Dunny Water can be seen winding its way through Glenn Dunny. You can see it but on top of the hill in the background are the ruins of Dunny Castle. 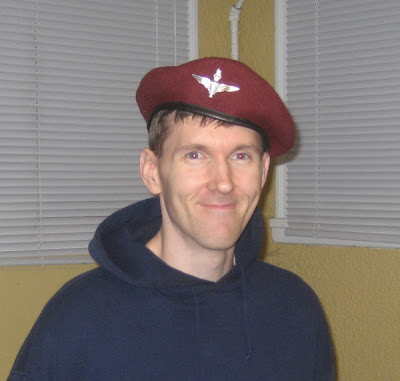 Major MacDonald – Commander of A Company, 3 Para (he also played the re-enactors until the Paras actually showed up). Someones got to show him how to were a para beret properly… 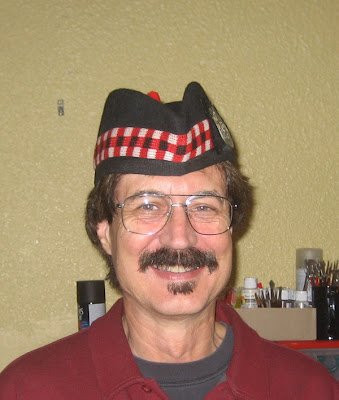 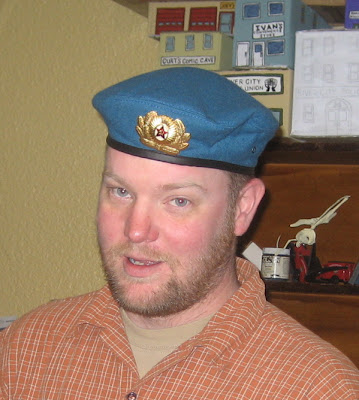 Comrade Major Brownovich – Commander 1st Company, 2nd battalion, 119th Parachute Landing Regiment, 106th (Tula) Guards Airborne Division. Someones got to show him how to not look like such a goof all the time… 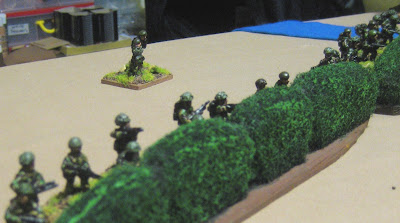 On the first turn Gary moved the TAs up to to take cover behind a hedge and started firing on the Russians in the building at the northeast corner of town. The exchanged fire for a few turns alternatively suppressing each other but generally causing no real harm. Gary had a turn or two where hw was unable to successfully issue any orders due to poor command rolls.

The SS re-enactors advance towards Dunny. 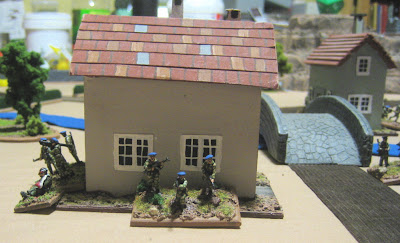 Here are the Desantniki in the building at the northeast corner of town. Gary must have issued orders this turn because one stand is suppressed.

On turn four the TAs finally got it together and took out a section of VDV with some accurately directed fire from their FNs. The next turn the sole Russian section in the building at the northwest corner of town vacated and moved over to the northeast building to help hold off the TAs. 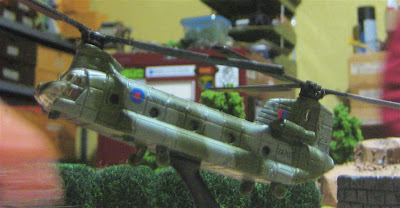 They moved onto the table… and stopped.

Around the same time the SS re-enactors got into position and started firing on the Russians in the southeast corner of town.

The Russians in the southwest corner of town watched for British heading their way. None came… at least not from the southeast. 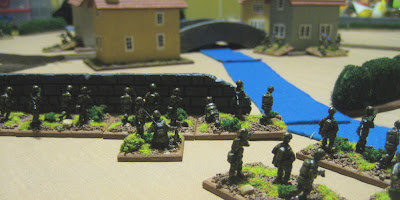 Same thing, different angle. This is about turn seven. 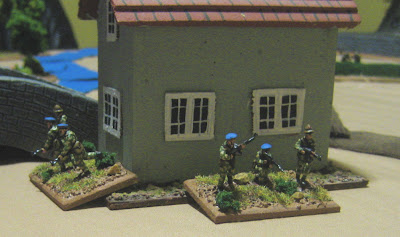 Russians in the southwest building redeploy to cover the fields to the west and northwest of town. 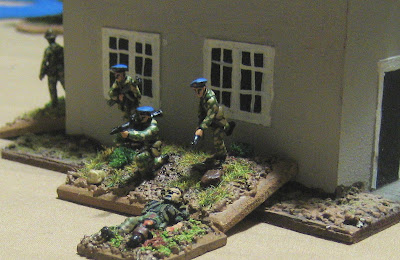 My RPG armed stand is suppressed. I need to get (or maybe make…) some more injured/suppression markers – the ones I was using are US troops from Vietnam…

The TAs shooting up the northeast corner of town. There is a gap in their line where I (finally) took one out.

Realizing they had only a couple turns to complete their mission Britton decided it was “Go Time” on turn eight. Supporting this assault were the SF/GPMG and three of the sections armed with IATW rockets – they took out one of the VDV section in the building in the southwest on the first order and suppressed the second with small arms fire and another rocket on the second order. 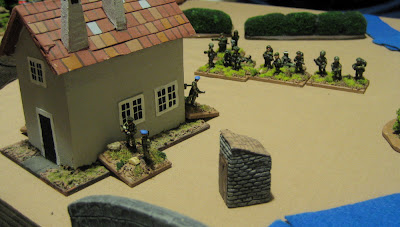 The Highland TAs also moved out on turn eight….

…as did the SS re-enactors. There were assaults going on everywhere! I handed the RE-enactors their asses. I took down a few stands of the TAs too. But they all kept me busy long enough for the Paras to press their attack and storm the bridge. They took out the final section of VDV in the southwest corner of town with another fusillade of AT rocketry

By turn ten the Paras had four stands and the HQ on the bridge and there was little I could do about it. I had two stands fire on them but could only cause a single hit and no suppressions. Game over, brits won! (just in the nick of time!) 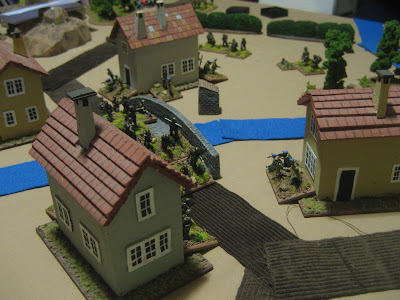 Another view of the situation at game end. This is from the southwest. Not only did they have troops securing the bridge they occupied the two buildings on the west half of town… 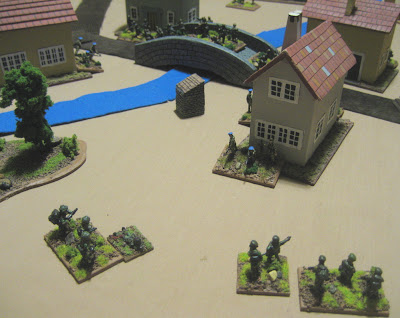 The remains of the Highland TAs; two (of the original six) Territorial Infantry sections. The SF/GPMG was also still in it’s original position behind the hedge. 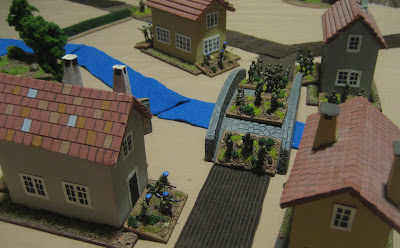 One last shot from the game end – taken from the north of town.

Fun game – could have gone either way. I think I had just the right size of forces for a nice quick game. The guys showed up seven-ish and I was still getting ready, we probably got started between 7:30 and 8PM and finished up by 10PM… I was tempted to drop two whle companies on the village and have the British counter-attack with everything I have painted... but for once I showed a little resraint, and it was worth it.

I definitely want to try out some armour in the near future. Next week, FOR SURE, I will play a little action in the Western Desert…!

Hey if you made it this far - feel free to post a comment below and let me know what you think!
Posted by tim at 11:19 PM