I finally finished up my Sherman Troop. And that pretty much finishes up the Canadians (well... except for the universal carrier…) 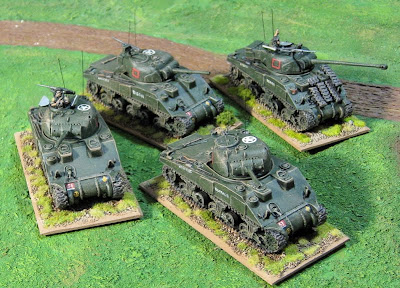 The Shermans are all from West Wind Productions. The Firefly I had finished up previously. These chaps are painted as a troop from B Squadron of the 1st Canadian Hussars (6th Armoured Regiment, 2nd Independent Canadian Armoured Brigade) who were in direct support of the 7th Canadian Infantry Brigade on D-Day. 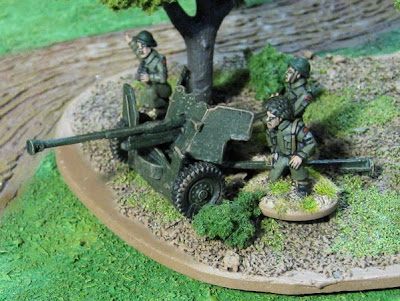 I also happen to finally finish up the 6-Pounder AT gun. The crew I had finished some time ago. Crew and gun are all from Artizan Designs.

The whole Canadian force so far…

I’m six riflemen shy of two full-strength rifle platoons. It’ll probably be a while before I pick them up because when would they have ever gone into action with nine – let alone a full ten!?

Supporting the Rifle platoons are two tubes of 3” mortars and their crews from the battalion’s Mortar Platoon, a six-pounder from the Anti-Tank Platoon, a couple sappers from the Pioneer Platoon, moving and firing Vickers teams from the Cameron Highlanders of Ottawa (the divisional MG Battalion), a scout car from the 7th Reconnaissance Regiment (17th Duke of Yorks Royal Canadian Hussars – the Divisional Reconnaissance Regiment), and the aforementioned troop of Shermans from the 1st Hussars (6th Armoured Regiment, 2nd Independent Canadian Armoured Brigade – who were in direct support of the 7th Brigade on D-Day).

The only outstanding Canadian item is a Universal Carrier. I guess I could use it to tow the AT gun around… but I’m not feeling really motivated to get it done any time soon. It’s a Tamiya plastic 1/48 model I picked up to see how close it might be in scale. It’s not too far off… but if I were to want any more carriers at some point I’d just buy a whole new lot and replace it as I’m sure it wouldn’t be anything close to a resin cast 28mm model…

Maybe some T-34s… maybe something Sci-fi-ish or pulpy… WE shall see…. I would like to finish up the T-34s because it’s the last of the Soviet stuff I have. I’ve actually got the East Front Campaigngoing again too so they’d potentially be handy in the short term – although the only opponents I have for them are the Pzkw38t and the StugD… (oh, and the doorknocker Pak36 AT gun).
Posted by tim at 7:43 AM