You can see the first play test we did here: POWER LEGION – Playtest #1

I have to admit I’m feeling just a little bad about not getting more play-tests in before this but May/June are just crazy around here… So last weekend I was DETERMINED to get another game in… and I did (despite that fact that we had Karate grading in the morning and then we had to ride to the other end of town to get to the the Dragon’s Den for Free RPG Day… and then get groceries… and get to the library to return some books… did I mention it was pouring rain all day…?) So I only had an hour or so to come up with some new heroes to try out… and then our friend arrived early… and we got started late… and then I had another insanely busy week… but that’s all over now… we played a game and her, finally, is the report!

Members of the League of Bad Evildoers, recently busted out of the Prince Albert Penitentiary and looking for payback from the River City Super Squadron that put them there orchestrated a bank robbery that they knew would draw the member of the Super Hero team which the Evildoers could then ambush.

Another straight up slugfest, more or less… 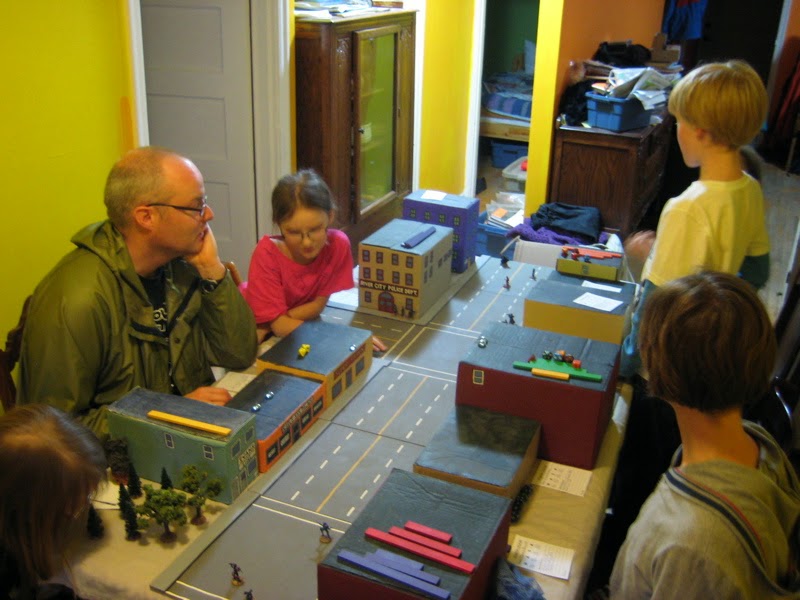 The two teams set up at the opposite ends of the street while the Police and the Bank Robbers face off at the intersection. 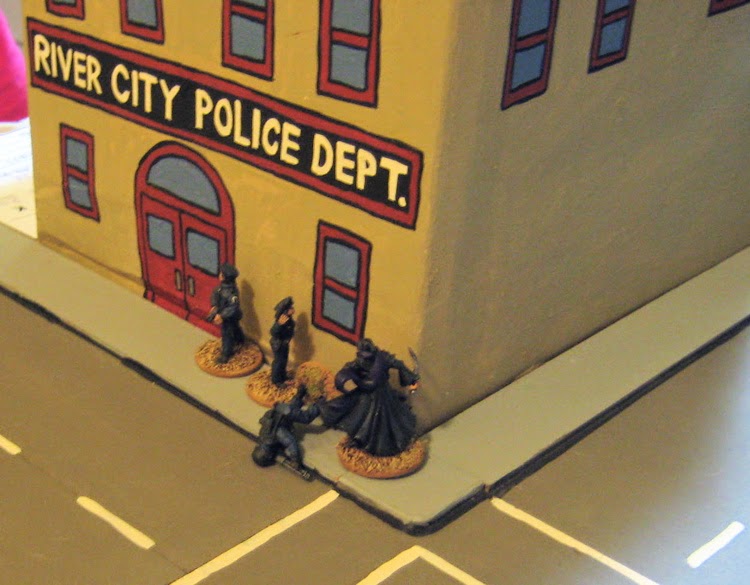 Dim Shadow kicked things off by teleporting to the polics station and ambushing the SWAT Officer easily taking him down! 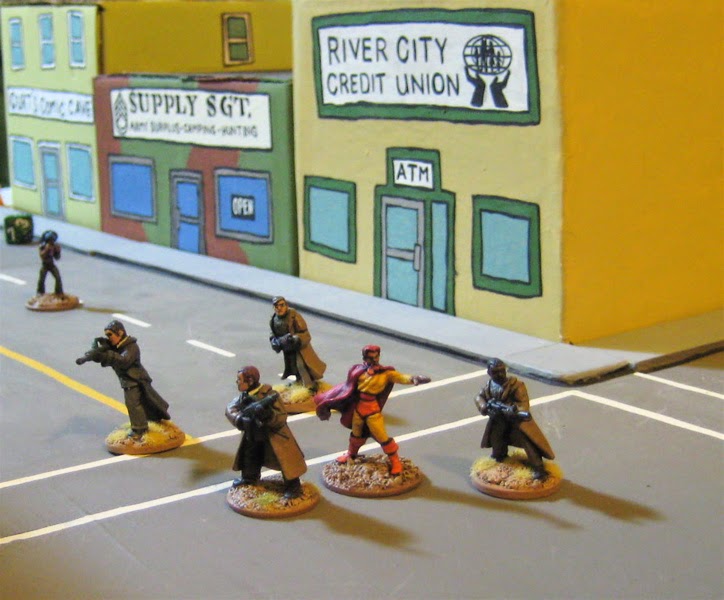 The Sinister Dr. Flame ran up the street to join the Bank Robbers exiting the main branch of the River City Credit Union. (Yeah, it might seem those bank robbers were a bit dim to rob a bank right across the street from the River City Police Department HQ…. but remember this was all just a set-up to draw in the River City Super Squadron!)
. 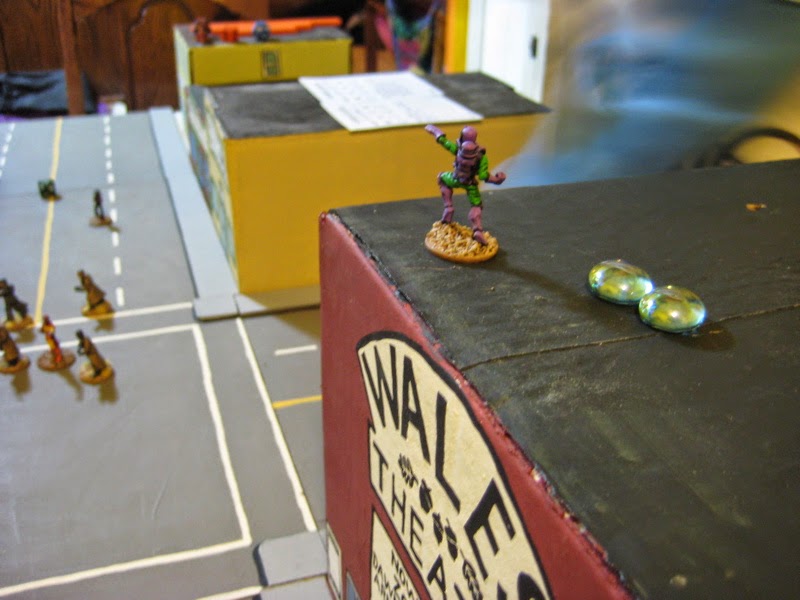 On the Heroes end of the turn Super Engery Man flew to the top of the Wales Theatre…. Aaaaaaaand then Superfasatgirl rolled a turn over… 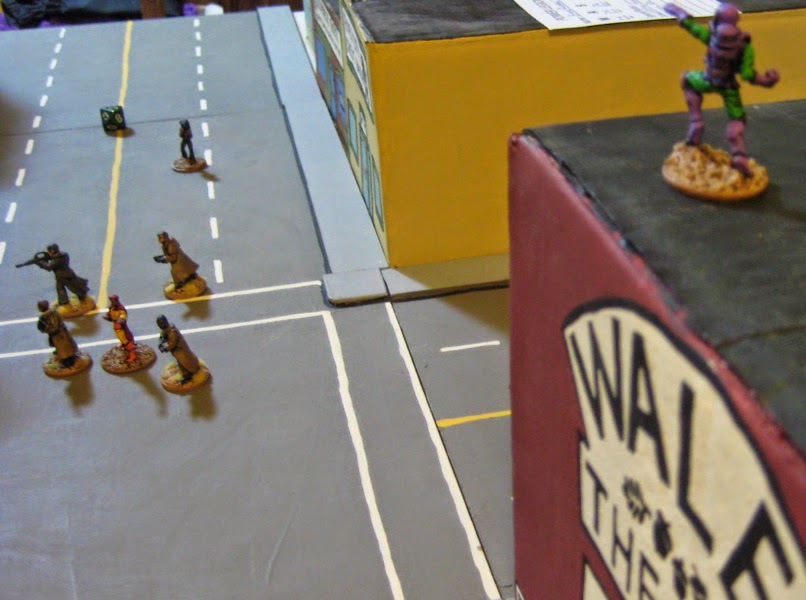 The sinister Dr. Flame and the Bank Robbers all blasted away at Super Energy Man on top of the Wales Theatre… but did absoloutely nothing to him (thanks to d8 armour!) 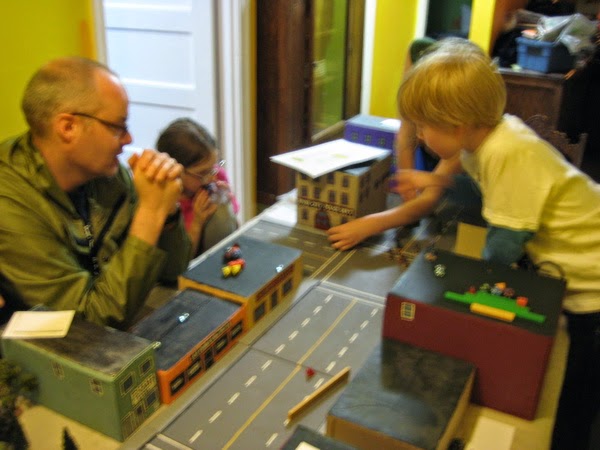 Punch Brewster ran up the street while Dim Shadow took down another cop. 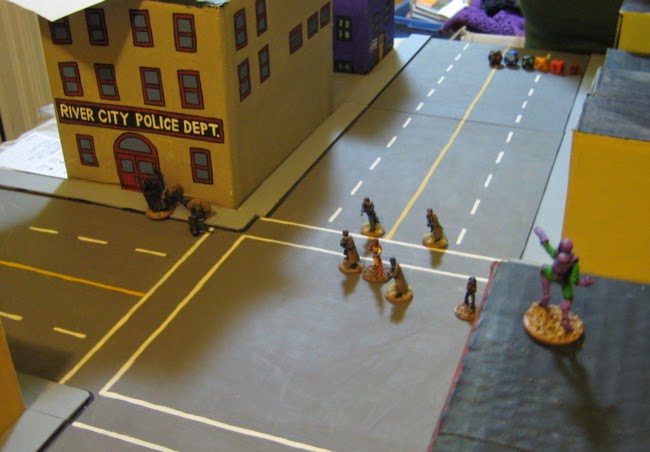 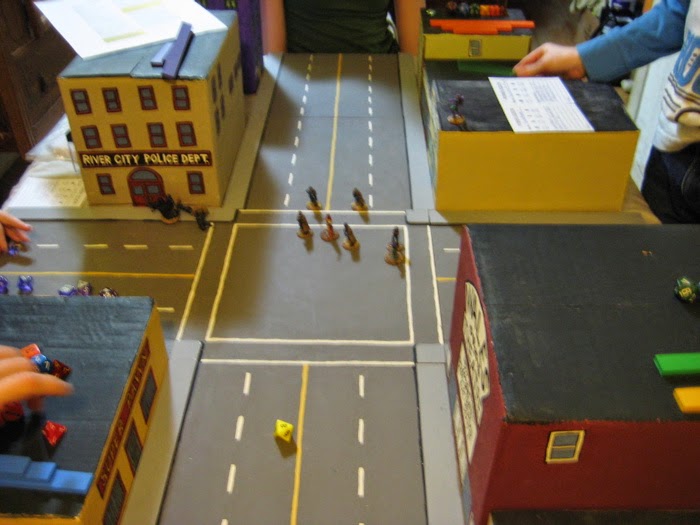 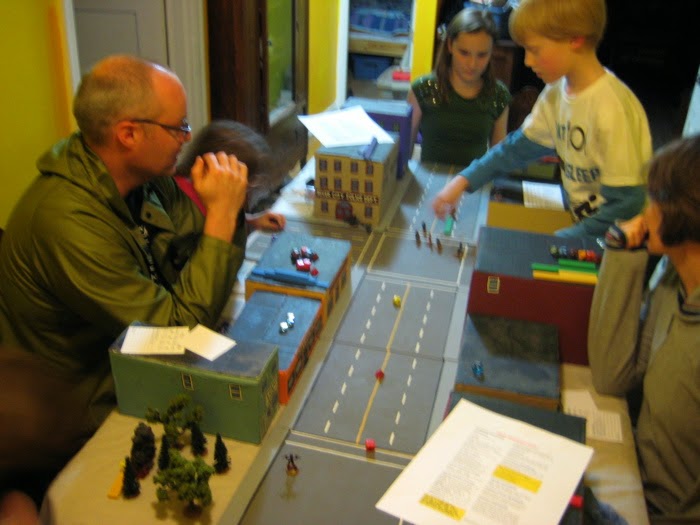 Super Energy Man unleashed a blast of raw Energy Power at The Sinister Dr. Flame staggering him! Then Super Energy Man flew away to the top of the River City Credit Union. 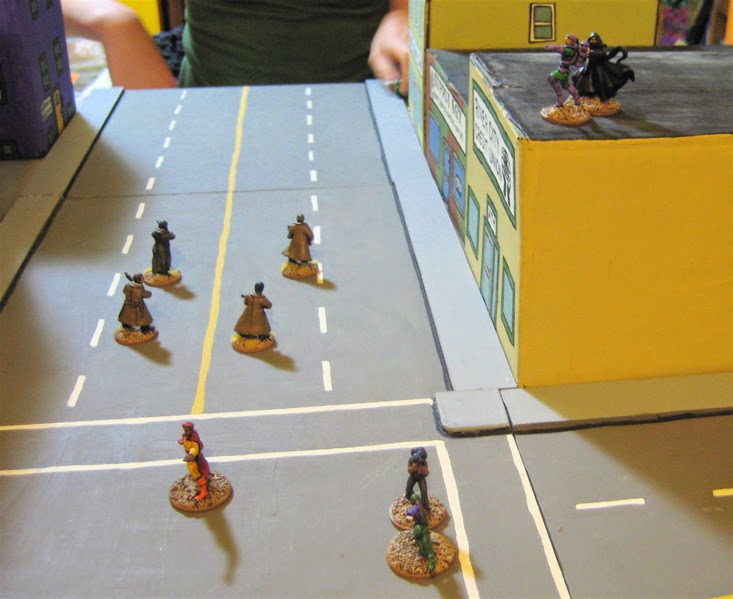 Dim Shadow teleported to the top of the River City Credit Union and attacked Super Energy Man… hitting him…. but not really doing anything (d8 armour, yo! Should have made Dim Shadow’s knives armour piercing…)… and then she teleported away before she got her but kicked off that roof! 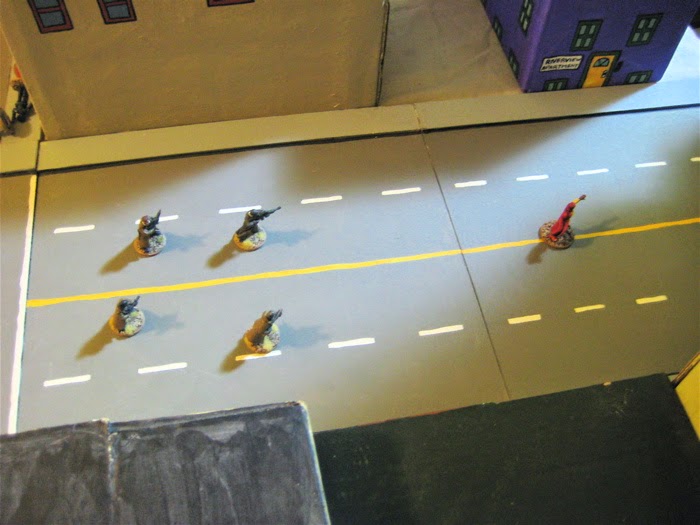 The Sinister Dr. Flame did not fall unconscious (being “staggered” he had to test every turn for KO). He and the Bank Robbers decided to hightail it out of there before they did end up KOed and were forced to be an objective in a supervillain breakout scenario next game (although, that might have been fun too!?) 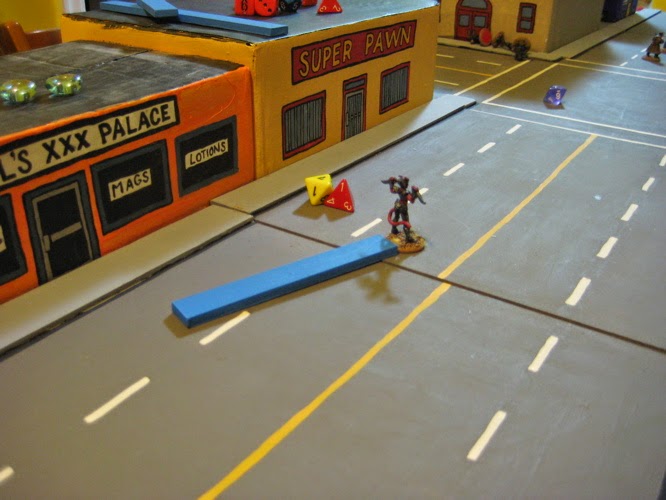 Hell Girl ran up the street some more… 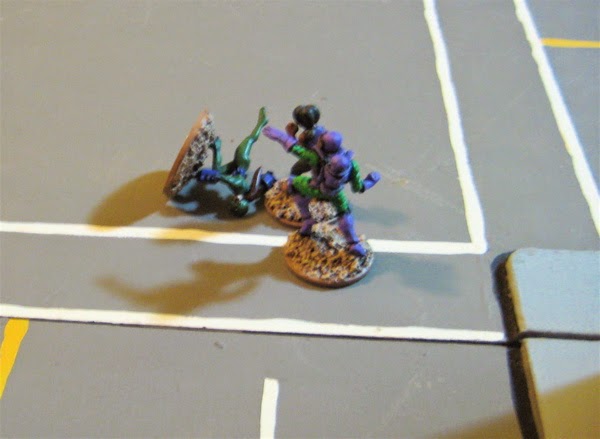 On the Heroes turn Super Energy Man flew down to join in the fight between Punchy Brewster and Superfastgirl… but nothing happened (probably punchy hit Super Energy Man, but couldn’t do anything to his awesome d8 armour/d8 Knockout). Superfastgirl also took a swing at Punchy and again with Punchy’s awesome d12 martial arts it was Superfast girl that got hit and was KOed for her efforts! 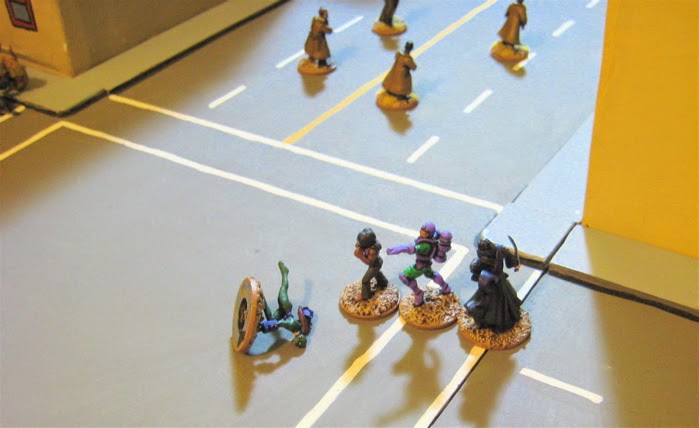 Oh, and The Sinister Dr. Flame succumbed to his injuries and was KOed. I guess we WILL be having a super villain break out next game! 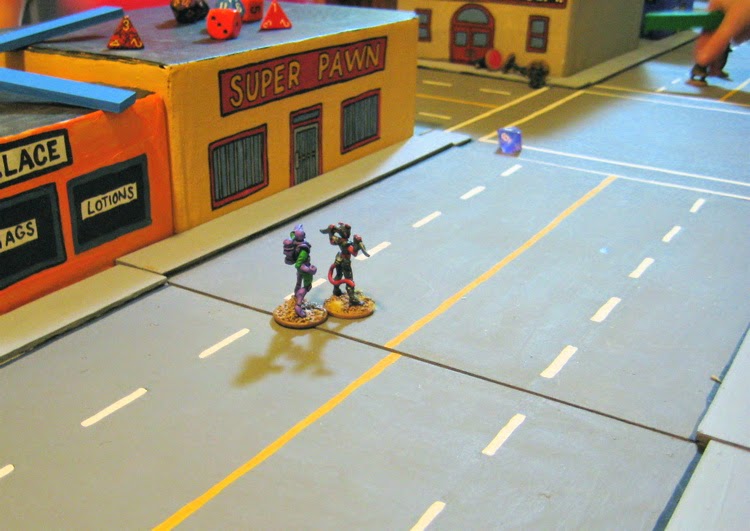 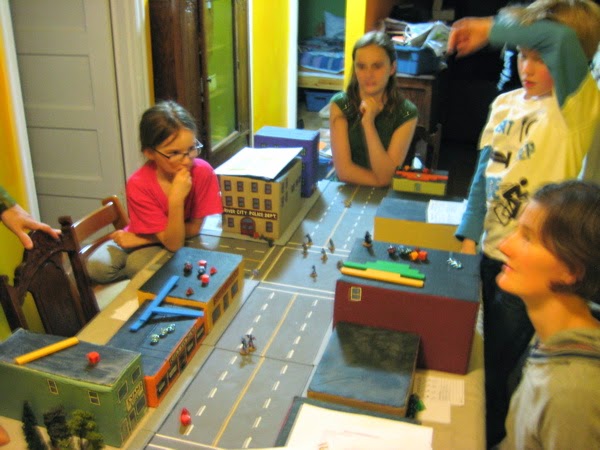 The Bank Robbers ran back towards the action – I guess finally seeing that Superfastgirl was down…? Dim Shadow teleported way out of the action – not wanting to be the target of what she knew was coming next…

I guess it was getting late and I stopped taking pictures… one both ends of the turn Punchy and Hell Girl hammered on each other – both times Punchy hit Hell Girl, but was unable to actually damage her. So they stood there. Hammering on each other.

Super Energy Man flew down the street to seek out Dim Shadow and delivered a mighty Energy Blast with KOed the Dim Shadow.

At that point we called it.

Again – a great game… took a little longer than I imagine it should – but mostly because I spent a lot of time looking things up to try and remind myself of how a few things worked.  Once I get it in my head it will be a lot quicker.

Hopefully now that all the crazy has subsided and all the kids activities are done for the summer we’ll get some more Power Legion play tests in SOON – though we’ve also been thinking it’s time we gave Of Gods and Mortals a try… and A Fistful of Kung Fu – Hong Kong Movie Wargame Rules… So many games, so little time...
Posted by tim at 1:39 PM