Well… here was are half way through the year…

To date I have painted 454 28mm foot figures – along with a few mounted, a gun and some terrain bits and a bunch of larger terrain tiles! Unfortunately I have acquired 962 28mm foot figures! The bulk of that (over half) was my birthday present from Amanda which was mostly 28mm plastic Hät Napoleonics – enough to build the infantry requirements for French, Prussian, and Bavarian armies for Neil Thomas’ Napoleonic Wargaming and have a sizeable bit left over for skirmishing with Song of Drums and Shakos.

So I’ve been thinking and planning the last week or so and trying to figure out what I could get done in the next 6 months.

I had been planning on finishing up the 3rd Canadian Division for the Vimy project. I think I’ll finish up the 7th Infantry Brigade (which I already have figures for) and some Corps Troops – but I may hold off on doing the 9th Infantry brigade until next year (as I would have to BUY some figures to complete those and then I have MORE to paint to paint more than I’ve acquired!?)

And what else am I planning to paint for the rest of the year? Well as I am studying the ancient world with the kids this year I thought I’d try and focus my gaming there as well. I have about 60 more Romans to finish up (Gladiators, Civilians and a few Legionnaires and Auxiliary troops) which I think I’ll start with over the next three weeks…

Then I think I’d like to work on my Nubians and Ancient Egyptians Betrween the two DBA armies and some individually based figures for skirmishing I have about 140 figures plus 4 chariots – which would take me another 7 weeks (putting us at the first week of September – right around when we start reading about Greeks – if all goes according to plan).

At some point I’d like to sneak in a few battalions of Great War Canadians and maybe finish off the final battalion of Early War French – though I don’t have any Early War Germans to oppose them.

Over the fall and winter I’d like to work toward finishing up all the historical and mythical Greeks I have. I have about 50 individually based figures for skirmishing/role-playing and about 450 figures to finish up for 6 DBA/HOTT Ancient/Mythical Greek armies (Spartan, Theban, Amazon, and three generic Greek Hoplite armies). I won’t get them all finished by the end of the year, but I should get the Amazons and two of the others finished by the end of the year. The remaining three I hope to finish up in January/February so I can have a semi-historical Ancient/Mythical Greek DBA or HOTT campaign for the 11th annual Wargaming Birthday Bash/Winter Wargaming Weekend! (anyone interested in getting in on that action!?)

If it were a perfect world I could hope the momentum would carry on through the next year and I could finish up the FIVE Alexandrian Successor armies I have figures for and then the three or four Early Imperial Roman armies I have figures for… and the Ancient Germans… but that might be asking a bit much of my attention span…. I DO need to get working on the Vimy stuff if I hope to pull off the Corps attack on the 100th anniversary in April of 2017!

At some time this year I would like to finish up a couple of terrain tiles I still have materials for. I sould also like to build the terrain for the 3rd Canadian Division’s area of operations at Vimy (and finish repairing the 4th Division’s terrain) and maybe build a Roman villa or two and some ancient city buildings that could be passed off as Greek or Roman. Perhaps I could get away with just making some new tile roofs for my Generic Middle East Mud Brick Village…?

I had been thinking I'd run some games at ToonCon this year but that now seems unlikely. With my shifting interests and a lot of other projects on the go this summer and fall (building book shelves, etc). I just don't think I'm going to have the time to commit to organizing a good convention game.

As I get going on DBA/HOTT armies again in the fall I might try and organize another campaign - as it always seems extremely difficult to get any number of local guys to come out on a regular weekly basis it might be a hybrid internet campaign like i ran in the past. The Campaign players would actually not be locals and send in their troop movements and diplomatic negotiations via email - and the battles would be played out locally by whoever shows up wanting to play some HOTT/DBA that week.

In the meantime, here is what I finished up last night… 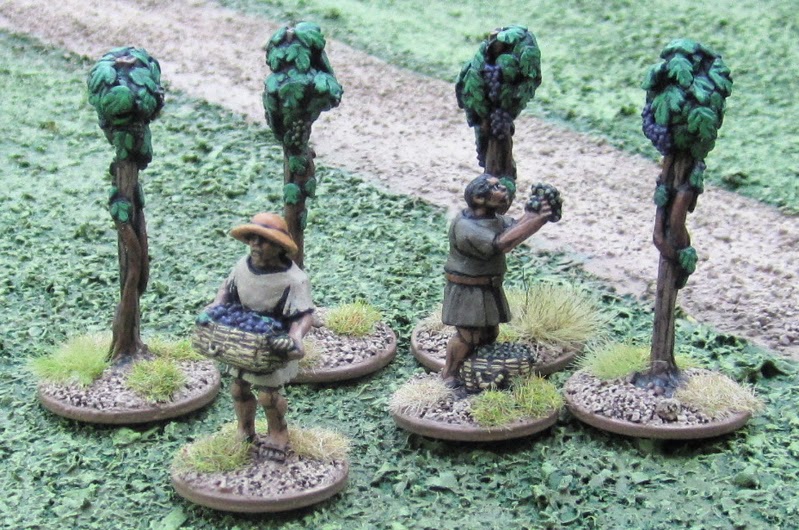 Some Grape Pickers and grape vines from Wargames Foundry.

Maybe some game reports of Power Legion play-tests and possibly a game of Of Gods and Mortals - I’m pretty sure I have enough Greeks I could pull off a small game of this…
Posted by tim at 1:58 PM