Song of Shadows and Dust


I finally got around to reading Song of Shadows and Dust and have been pretty excited about getting it on the table since. The kids finally humoured me and played a game I set up for them.

I actually got so excited I briefly thought I might use it (along with elements of the campaign Song of Deeds and Glory for the 2015 Winter Wargaming Weekend – give the popularity of the skirmish campaign we had at the 10th Annual Wargaming Birthday Bash this past February… But then I got thinking I’d potentially have to come up with 80-10 civilians (for 4-5 tables) and another 6-7 gangs worth of guys (I could easily field two – maybe three…) and BUILD another 3-4 tables worth of buildings!? Not saying it wouldn’t be possible… but I had other plans already and those plans involved painting figures I already HAVE! Maybe I’ll have another wargaming weekend… I’ll definitely get a little campaign going with the kids and maybe Amanda and anyone else local that wants to get in on it…

The Weaver’s of the Weaver’s Guild in the Weaver’s Quarter of Iskedumdrum had enough of paying taxes to the municipal authorities and then having to pay their “extra taxes” to some corrupt militiaman for “protection”. The Weaver’s were a force to be reckoned with. They were very skilled and relatively wealthy and well respected. The cloth woven in Iskedumdrum was becoming famous and sought after throughout the empire. They shouldn’t have to pay “extra taxes” they figured… so they stopped. Not wanting the other craftsmen and guilds in the other district any funny ideas this situation had to be brought to a quick end or the Militia would find every quarter not bothering to pay their “extra taxes”!!

The Weavers Guild (played by The Girl)

The Militia (played by The Boy)

The Militia got “Looking for Trouble” – so they were just there to kick butt and remind those pesky Weaver’s just who was in charge!

The Weaver’s rolled “Keeping the King’s Peace” which meant they were trying to maintain control over the populace by showing they could protect them – they would loose Victory Points for any civilians killed! (Not a good start for a side with a Demagogue – that depends on help from those civilians!)

The scenario took place at high noon so there were 12 civilians on the table.

The Weavers were defending. 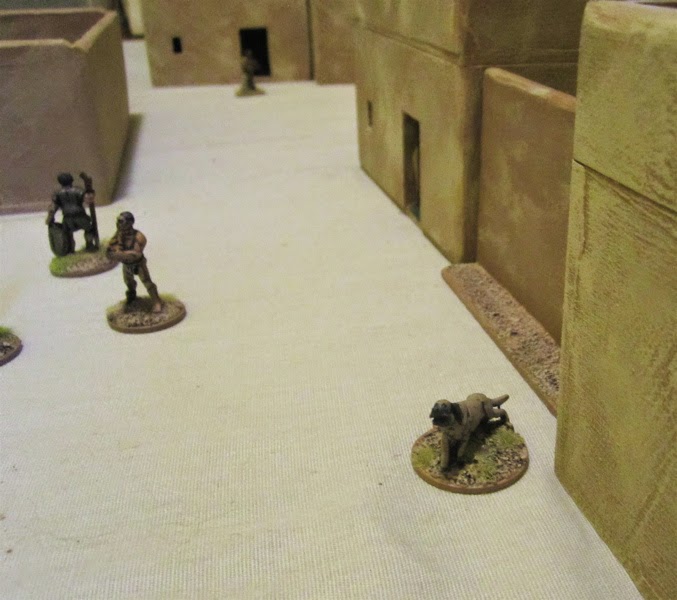 There’s supposed to be “poultry” set up by the defender which make noise when anyone is near and negates the Stealth special rule and nullifies any ambush bonus anyone lurking near them might have otherwise got. Lacking poultry, we set up a barky dog that barked at anyone that came near… 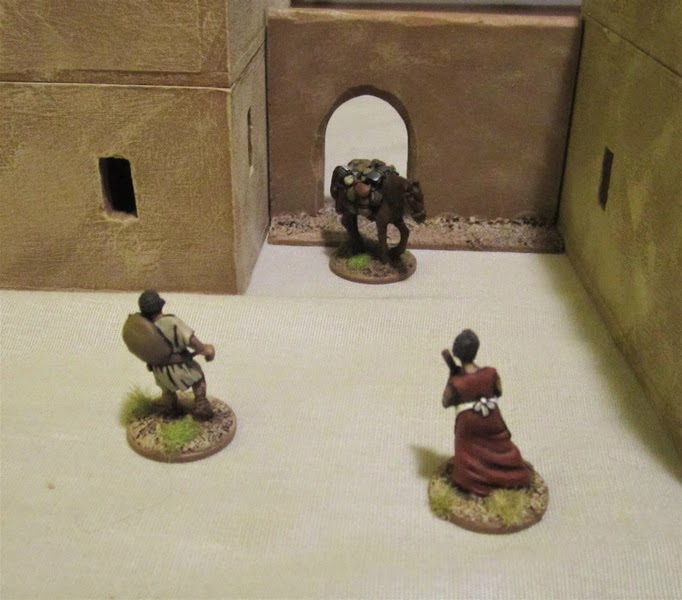 I did have a mule… but I’m thinking I’ll have to put a mule on a larger base this one didn’t really have a big enough one to block anyone’s way anywhere – except right here in a passageway.

Or perhaps I need more buildings and tighter corridors!? 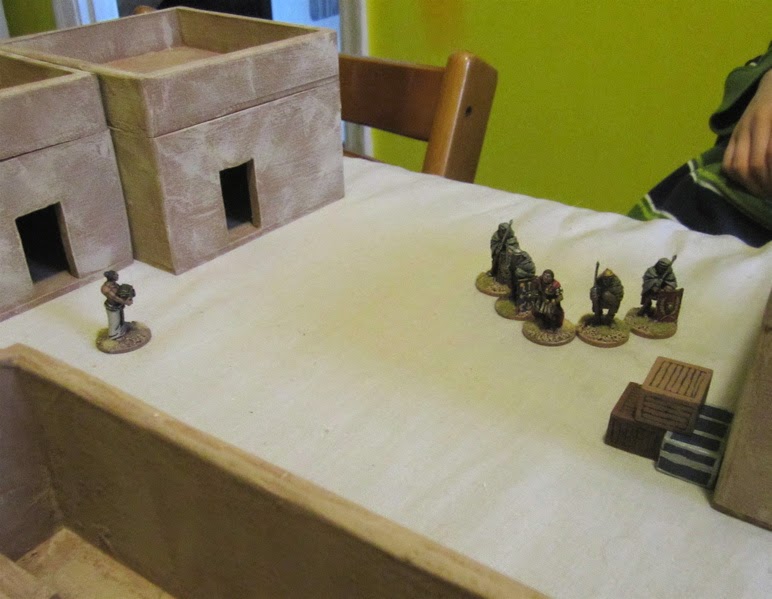 Gaius Foetidus Flatus leads his militiamen into the Weaver’s Guild. 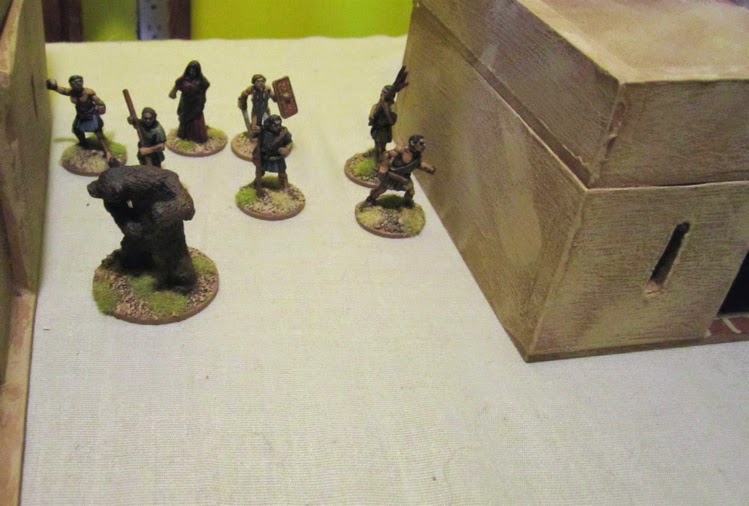 Having been warned by look-outs that the Militiamen were approaching, Textora Majorica, leader of the Weavers’ Guild, escorted by a few of her most trusted guild members heads out to confront them. 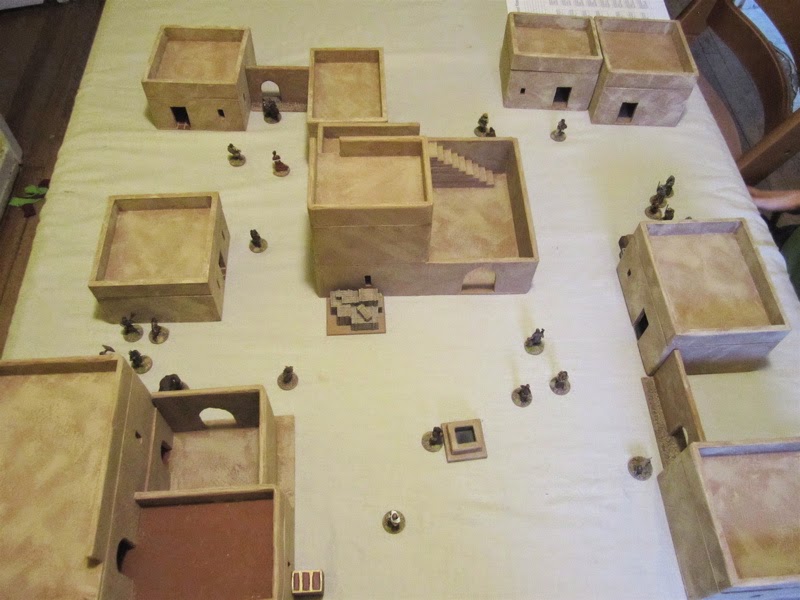 The scene of our confrontation: the Militia are at the right of the picture, the Weavers at the left. 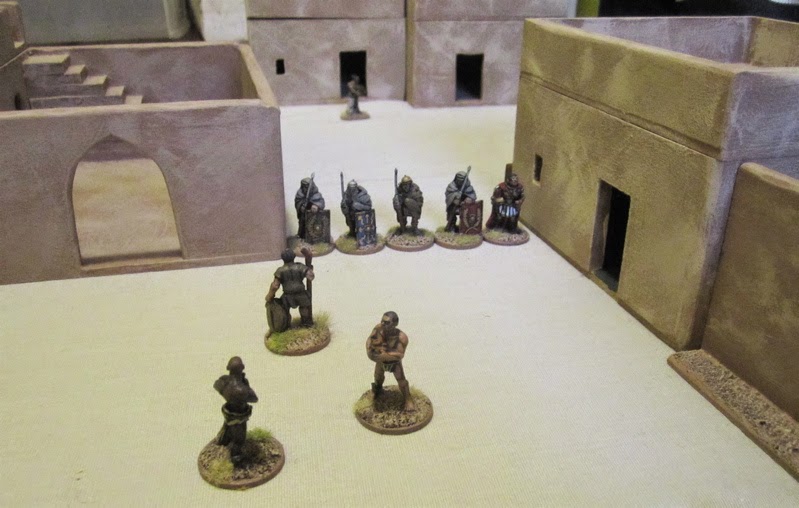 The Militiamen at the end of their first turn. 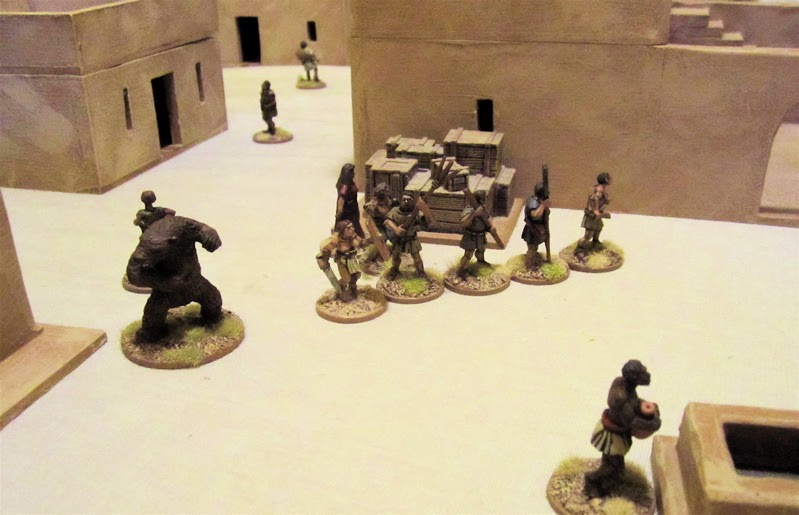 The Weavers enter the square and spot the Militiamen. 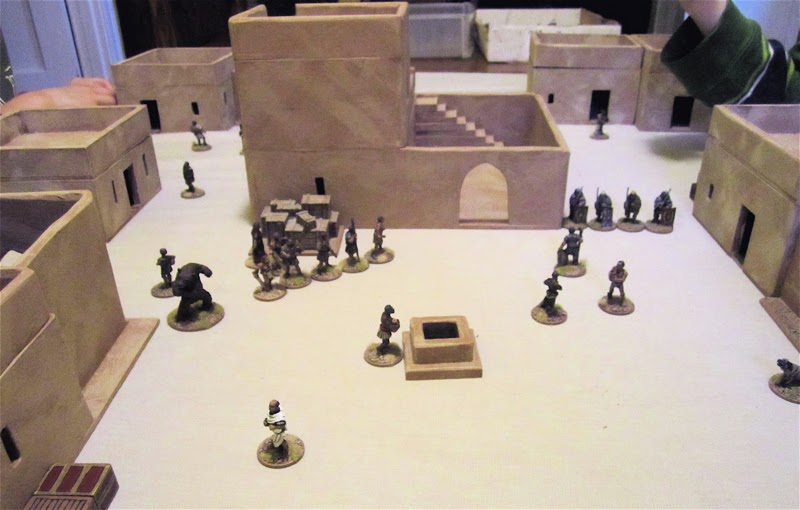 At this point The Girl was anxious about using the Demagogue to rally the citizens of her district because the Militia would get an extra victory point for each one that was killed… so she just hung back to see what happened. 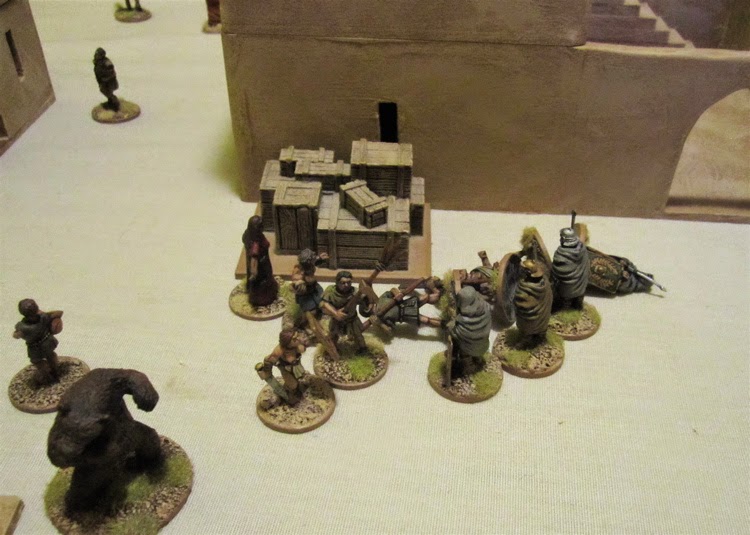 The Militiamen rushed forwards – there was a clash of metal on wood and bodies tumbling over each other a few fell to the ground in the scrum. 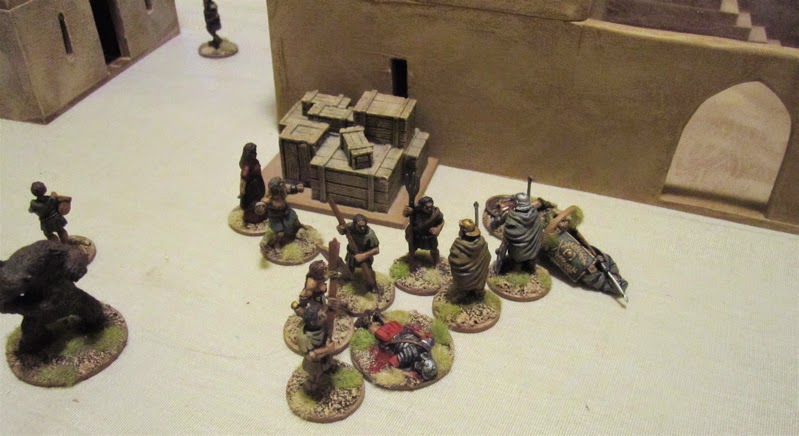 At one end of the line a Weaver got up only to be cut down by one of a Militiamen’s gladius. At the other end a pack of the Weavers ganged up on a Militiaman and brought him down. 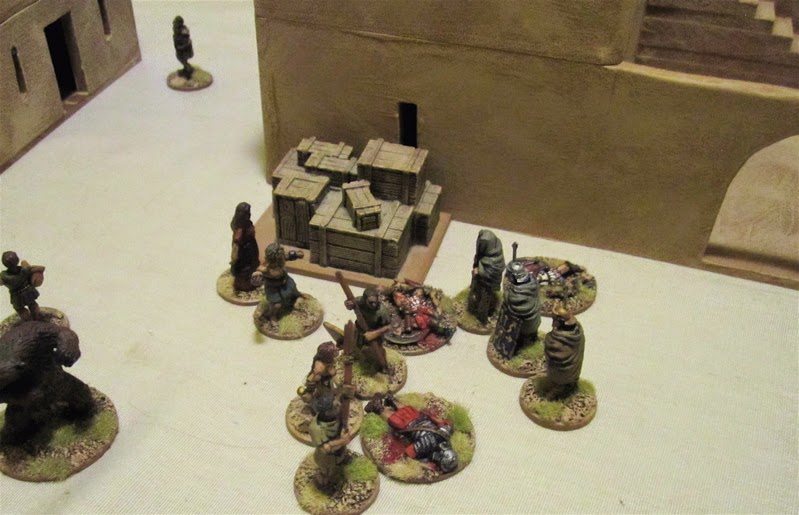 The militiamen cut down another Weaver and reformed into a line. 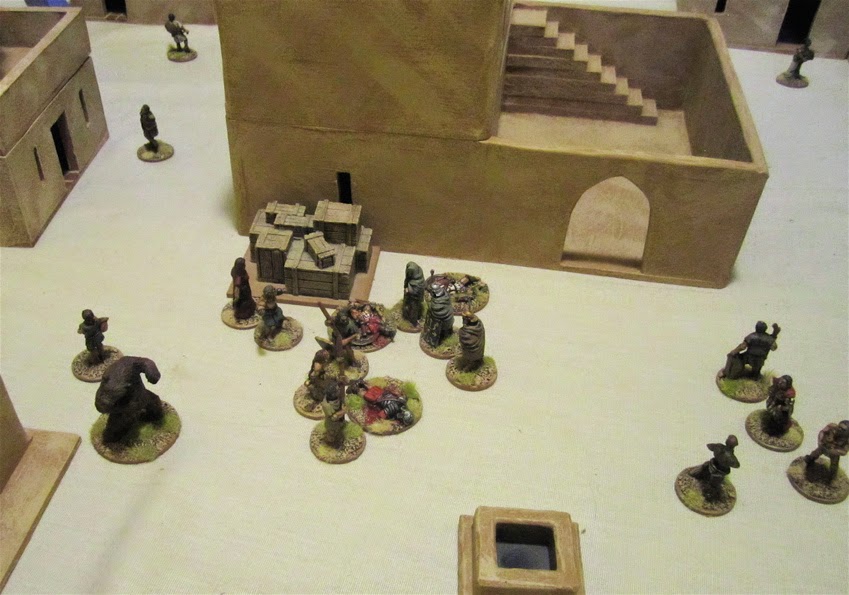 At this point it was looking grim for the Weavers – the advantage the armed and armoured Militiamen had was great… Textora Majorica cried out and plead for help from the citizens of her district – would they allow such violence and barbarity to go on in their quarter!? Especially at the hands of those who were ostensibly there to “protect” them?

The denizens gathered in… 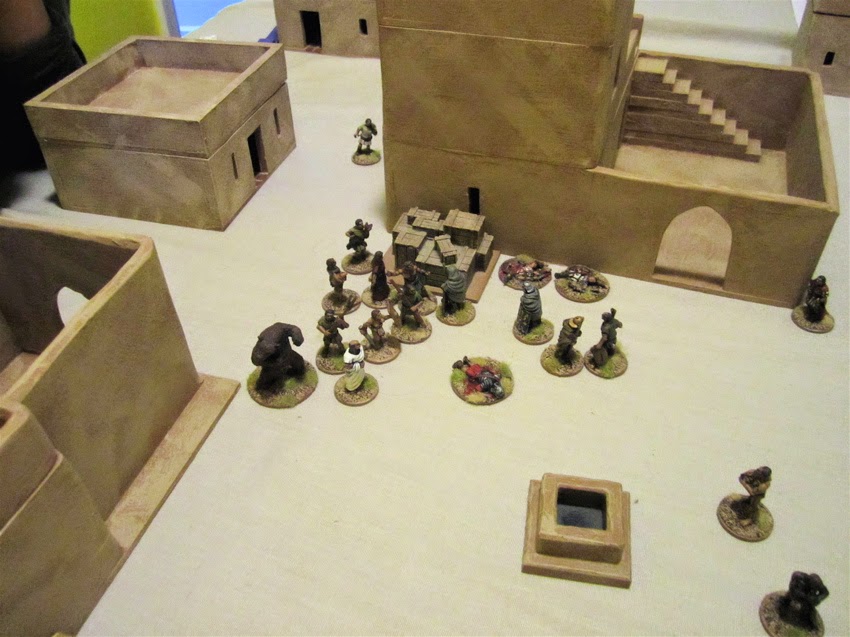 The Militia carried on with their attacks – 6 civilians were within one short of the first attack – two fled, but the other FOUR joined the Weavers! (as the militia were armed and fighting against unarmed defenders and the defenders were “Gray” – meaning they blended in and looked like honest ordinary citizens that were being attacked for no apparent reason – they had hefty bonuses to their Quality rolls to see if they got involved!) 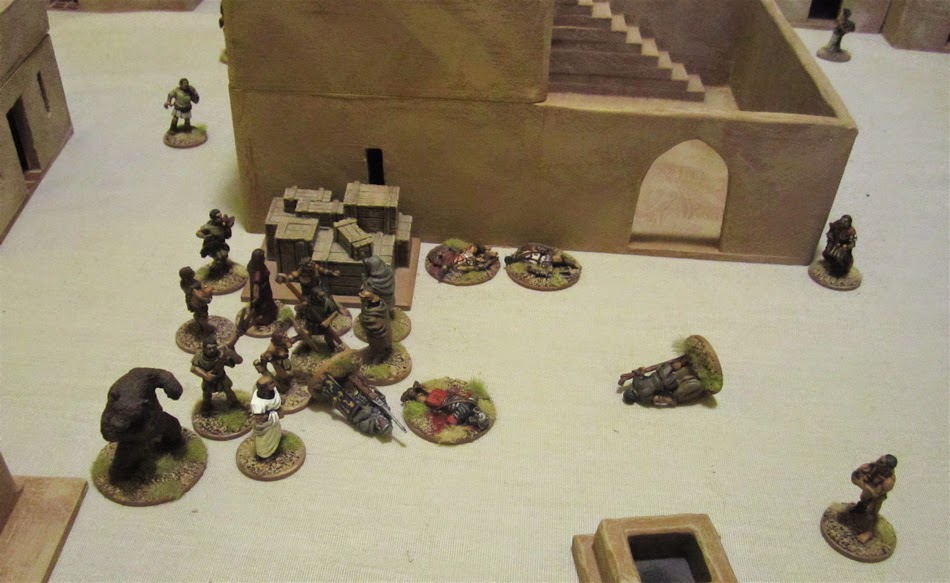 One of the citizens was quickly cut down as he tried to stop one of the militiamen from charging in against the Weavers. (I need to make some civilian casualty markers…). 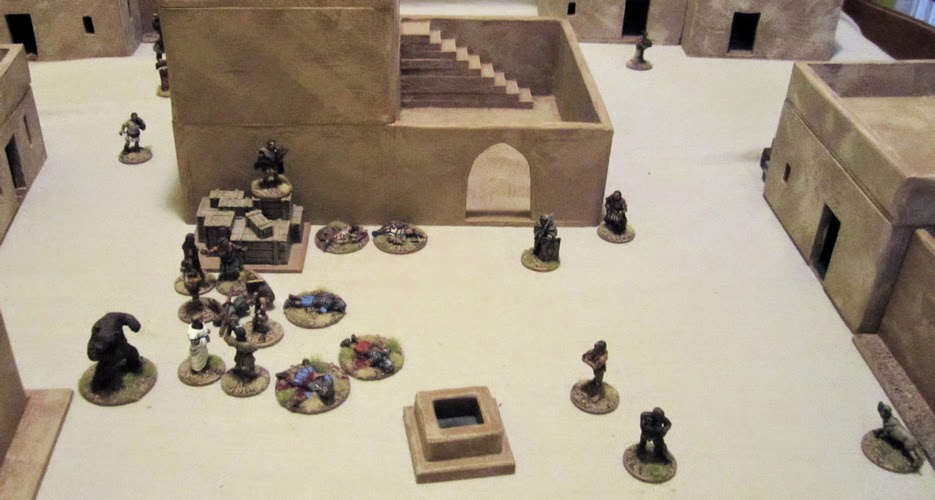 Things went downhill quickly for the militia, in one turn one of their number was ganged up on in melee and taken down (knocked down by one in contact, finished off by another). A second Militiaman was knocked down by a large crock that had been hurled at him from a short distance by one of those newly joined citizens – and then was finished off by a second newly joined civilian who was throwing… er… chickens!? (the figure was holding chickens and the kids were delighted by the fact that a militiaman was taken out by someone hurling dead chickens at him… they’re 8 and 10… who am I to complain as long as they’re playing games with me and having fun!)

The remaining Militiaman in the scrap then failed morale and dashed out of there – thankfully before he had been surrounded! At that point the Militia decided to call it a day and scarpered back to their guard tower with their legs well and truly between their legs…

Don’t mess with the weavers of Iscadumdrum!

In the end the Militia scored 3 Victory Points for the two weavers and one citizen taken out during the game. When we checked after the game both the Weavers survived with light wounds and could fight again the next game (if we had one), the citizen, however had been slashed across the neck with a gladius and bled out in the street…

The Weavers got 6 victory Points for the three Militiamen they took down and a further two for the remaining ones that fled off the table… of the downed militiamen only one survived. The other two, if they weren’t killed in the actual action, were quickly beaten to death by the angry gathering mob! The one that slipped away was only lightly wounded.

I am pretty fired up to get a campaign of this going.

I will have to find a few more figures to act as faction members… perhaps I could use a few of the Greeks that I have… I suppose I do have some Egyptians that I could press into service…?

I have one last batch of Romans that I’m finishing up this week that hopefully I will be posting pictures of shortly. I think the kids and I will definitely get Amanda trying out Song of Shadows and Dust over the weekend!
Posted by tim at 10:22 PM